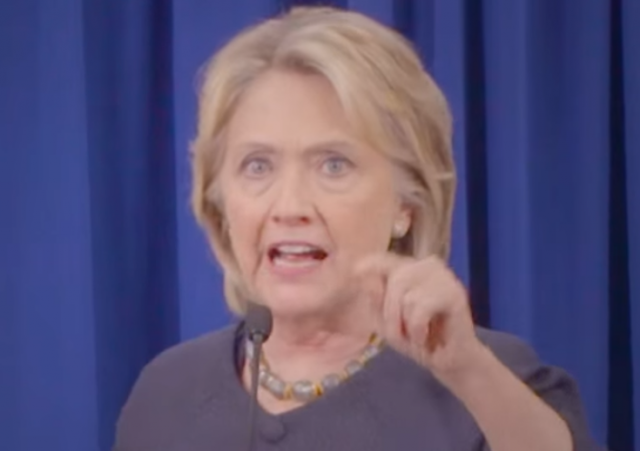 Posted by Kemberlee Kaye on April 11, 2016 8 Comments
Hillary Clinton does not like being asked to release transcripts from her pricey paid Wall Street lunch speeches. Clinton was paid a whopping $675,000 for three speeches to Goldman Sachs. In an interview with the editorial boards of two Philadelphia-based newspapers, Clinton got nasty when asked if she would release her speech transcripts. True to form, she shifted to the matter of tax returns and bemoaned double standards rather than answering the question.
Read More 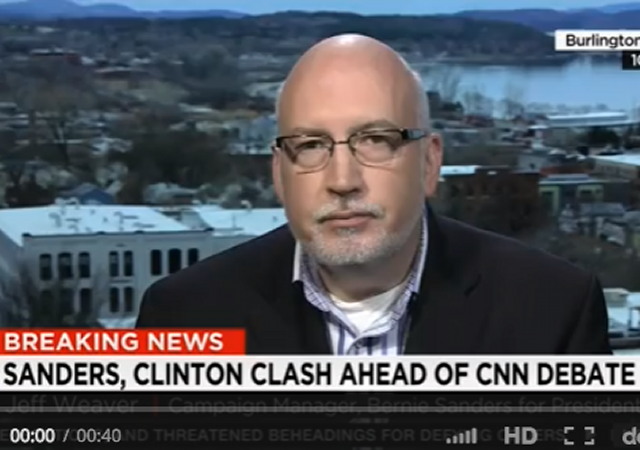 Posted by Mike LaChance on April 10, 2016 7 Comments
The battle for the Democratic nomination is finally getting very interesting. Bernie Sanders' campaign manager Jeff Weaver recently appeared on CNN and while host Carol Costello was (of course) defending Hillary Clinton's record, Weaver dropped some heavy criticism. Weaver went after Hillary for her ties to corporate cash, a usual tactic for the Sanders camp, and then blamed her for the rise and spread of ISIS.
Read More 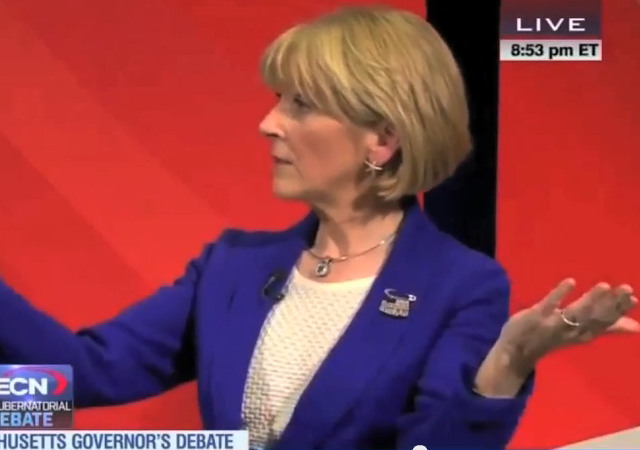 Posted by Mike LaChance on April 08, 2016 4 Comments
Over at Instapundit, Glenn Reynolds asks: Is Hillary Clinton turning into Martha Coakley? It would be great for Republicans if she is. The column being cited is by Kimberly Atkins of the Boston Herald:

Hillary Clinton better take notice before being Coakleyed WASHINGTON — The Wisconsin primary — Hillary Clinton’s sixth loss in a row — was a warning shot across her bow: She’s at risk of becoming the national version of Martha Coakley. 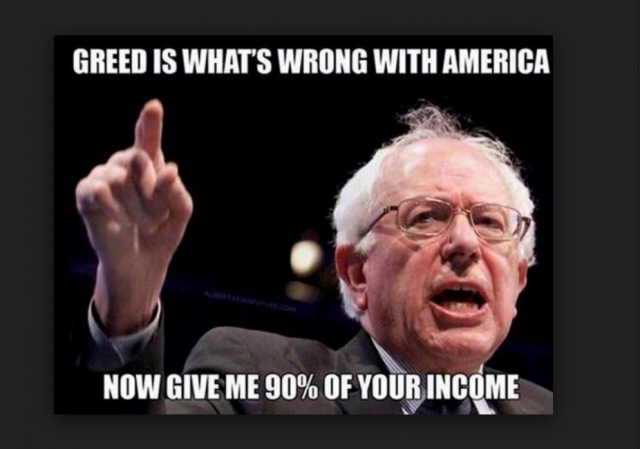 GE CEO Swats Back at Bernie Sanders and It’s Glorious

Posted by Kemberlee Kaye on April 08, 2016 21 Comments
Bernie Sanders has few compliments for anyone he's decided engages in "corporate greed." In his disastrous interview with the New York Daily News, Sanders claimed General Electric was, “destroying the moral fabric," of America.

Daily News: I understand that. I wanted to draw a distinction, though. Because in your speech you mention the financial industry and you focused on corporate America, the greed of Wall Street and corporate America. So I wanted to get a sense of corporate America, as the agent of American destruction. Sanders: General Electric, good example. General Electric was created in this country by American workers and American consumers. What we have seen over the many years is shutting down of many major plants in this country. Sending jobs to low-wage countries. And General Electric, doing a very good job avoiding the taxes. In fact, in a given year, they pay nothing in taxes. That's greed. 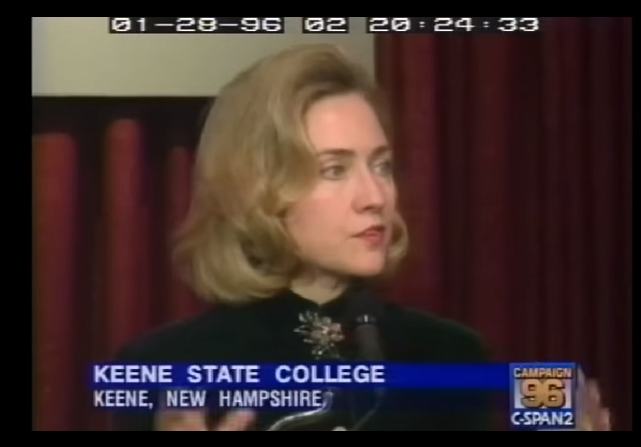 Posted by William A. Jacobson on April 07, 2016 26 Comments
The Black Lives Matter movement is angry with Hillary Clinton over Hillary's use of the term "Superpredators" in the 1990s to describe young black male criminals. That term was an integral part of selling the public on tougher criminal sentencing that BLM blames for the current high rates of incarceration for blacks. We covered the issue when a BLM protester confronted her at a fundraiser in late February, Hillary apologizes for stigmatizing generations of young black men as “superpredators”:

It was a chilling speech in 1996. Speaking in favor of a new crime bill, Hillary Clinton used the term “superpredator” to describe young, mostly black, men who were residual criminals. While the term was not literally limited to blacks, it came to signify and justify the mass incarceration of young black men under harsh sentencing laws:

Posted by Kemberlee Kaye on April 06, 2016 42 Comments
On April 1, Bernie Sanders sat down for an interview with the NY Daily News editorial board. It was terrible. So terrible, The Washington Post said it was, "pretty close to a disaster." Sanders was unable to answer basic questions about several of his campaign policy centerpieces. Most notably, Sanders struggled to explain how he would break up banks.

Daily News: Okay. Well, let’s assume that you’re correct on that point. How do you go about doing [breaking up the banks]?

In a victory speech from Wyoming — which holds a caucus on Saturday — Sanders claimed momentum and argued he is a stronger general election candidate than Clinton. 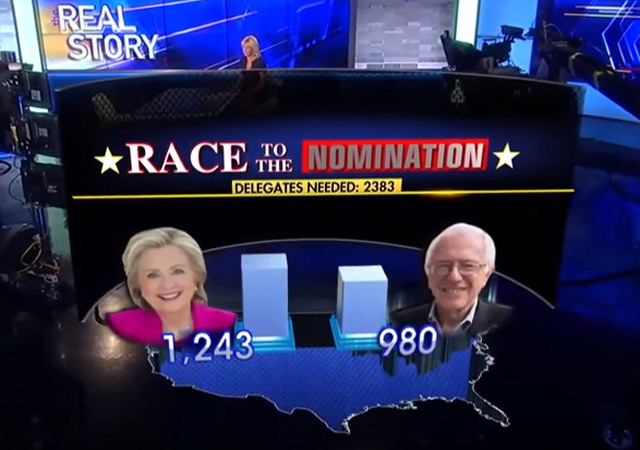 Posted by Mike LaChance on April 05, 2016 1 Comment
Hillary Clinton has finally agreed to another debate with Bernie Sanders after days of taunting between the two campaigns. The debate will happen in Brooklyn on April 14th. Brooklyn is an interesting choice because Clinton's campaign headquarters is there and it's also hipster central and therefore, a hotbed of support for Sanders. ABC News has the details:

Hillary Clinton, Bernie Sanders Agree to Debate in Brooklyn The Democratic candidates' debate over debates has been resolved —- at least for now. 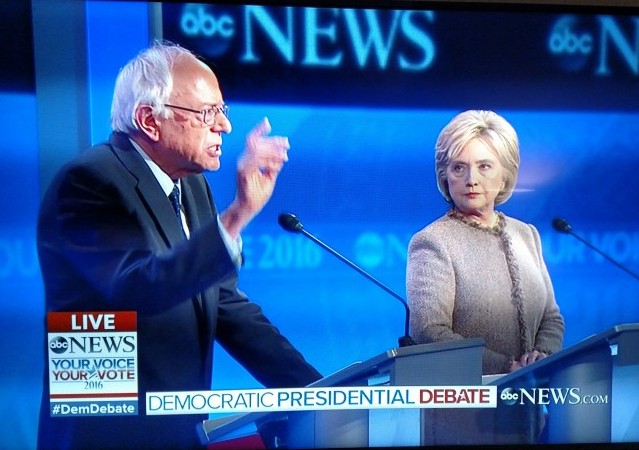 Posted by William A. Jacobson on April 01, 2016 10 Comments
Hillary's "I am so sick" rant yesterday is understandable. The lady is under pressure. Not only are the feds circling her, Bernie just announce a huge March cash haul. The NY Times reports:

Senator Bernie Sanders of Vermont raised $44 million in March, his campaign announced Friday, beating his previous best monthly haul. The strong fund-raising numbers followed a string of victories in Democratic voting contests last week in Idaho, Washington, Alaska, and Hawaii. They also hint at the seemingly limitless well of small dollars that Mr. Sanders has been able to tap, even as his chances of winning enough delegates to take the Democratic nomination appear to be waning. Should the Democratic front-runner, Hillary Clinton, post a lower number, it would be the third consecutive month that Mr. Sanders raised more money than the former secretary of state. 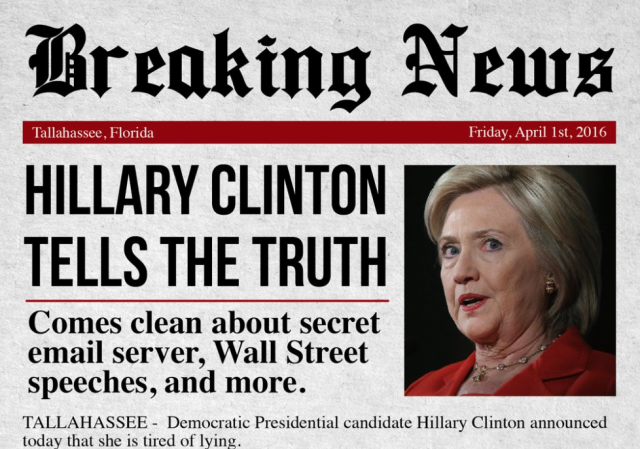 Posted by Sarah Rumpf on April 01, 2016 9 Comments
The Republican Party of Florida (RPOF) is having a little fun at Hillary Clinton's expense this April Fools' Day, posting several news releases highlighting her problems with the investigations into her email server and unfavorable polling. In a mock press release obtained by Legal Insurrection, RPOF shared several fake news articles. One announced that Clinton had won an Academy Award "for her portrayal of an honest candidate," including a quote from DNC Chairwoman Debbie Wasserman Shultz praising Clinton's "ability to pretend she hasn’t changed her position on a range of key issues, and dedication to sticking to her talking points regarding her secret email server and Wall Street speeches." Other articles included one claiming that former President Bill Clinton would be endorsing Bernie Sanders instead of his wife "due to Hillary’s lack of transparency with voters" and another purporting to have a video showing Clinton actually "wiping her server clean" by physically wiping her Blackberry with a small cloth.
Read More 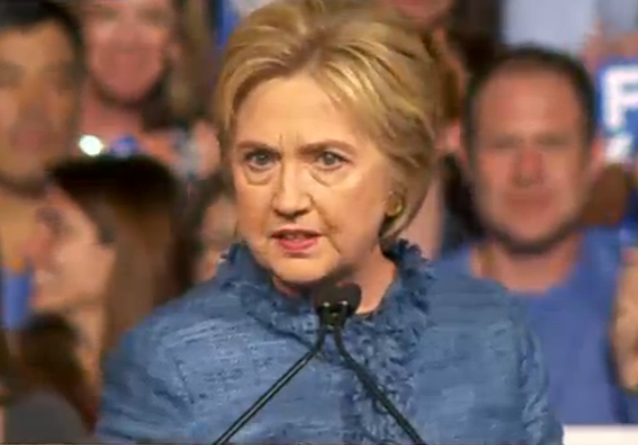 Posted by William A. Jacobson on March 31, 2016 39 Comments
The Hillary Clinton email scandal has been kicking around since March 2015. There has been a drip, drip, drip of inconsistencies in her story and justifications for creating a shadow electronic government controlled by Hillary and her operatives.  The slow flow of identification of classified information on emails, including those sent by her, now has become a flood. The FBI probe, so frequently dismissed by Hillary as a non-event and nothing to worry about, now has become worrisome. The FBI appears to be rolling up her underlings, including her key technical consultant who was hired by the State Department as a political appointee. And interviews are underway or soon to be underway with key Hillary associates. Now David Shuster, formerly of MSNBC now with al-Jazeera America (please hold off on the "what's the difference" jokes), reports that Hillary will be interviewed.
Read More

Posted by William A. Jacobson on March 29, 2016 16 Comments
Hillary Clinton talks a tough game and can dish it out, but when the going gets tough, she and her supporters play the bully card on male opponents. The classic example was how during the first debate for 2000’s Senate election, Congressman Lazio demanded Clinton sign a New York Freedom from Soft Money Pact on stage, mid-debate. Hillary supporters immediately portrayed this as bullying and crossing a line a man should not cross with a woman. The Clinton campaign—and the media—were apoplectic:
Read More 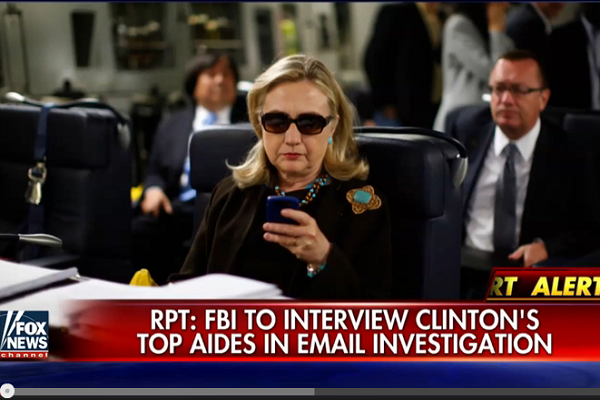 Posted by Fuzzy Slippers on March 29, 2016 21 Comments
Despite her nonchalance about the issue, Hillary Clinton's email problems are not going away.  The FBI investigation has entered a new phase as the FBI is set to interview Hillary's longtime and closest aides. The Los Angeles Times reports:

Federal prosecutors investigating the possible mishandling of classified materials on Hillary Clinton’s private email server have begun the process of setting up formal interviews with some of her longtime and closest aides, according to two people familiar with the probe, an indication that the inquiry is moving into its final phases. Those interviews and the final review of the case, however, could still take many weeks, all but guaranteeing that the investigation will continue to dog Clinton’s presidential campaign through most, if not all, of the remaining presidential primaries.

Why did Liz Warren pick a fight with Trump now?

Posted by William A. Jacobson on March 28, 2016 20 Comments
Elizabeth Warren is on the, er, attack against Donald Trump, who slashed back by mocking Warren's false appropriation of Indian identity to try to advance her career. The back and forth begs the real question, which is why did Warren decide to launch a tirade now against Trump? Trump has been being Trump at least since last summer. If Warren wanted to go ballistic on him, there were plenty of earlier opportunities.
Read More

Posted by New Neo on March 28, 2016 19 Comments
I cannot recall a campaign season even remotely like this one, where the majority of American voters dislike both frontrunners.  This was hinted at following the Florida primary and is confirmed by a recent CBS News/New York Times poll:

Compared to frontrunners in previous presidential primary races, Trump and Clinton's unfavorable ratings (57 percent and 52 percent respectively) are the highest in CBS News/New York Times Polls going back to 1984, when CBS began asking this question. 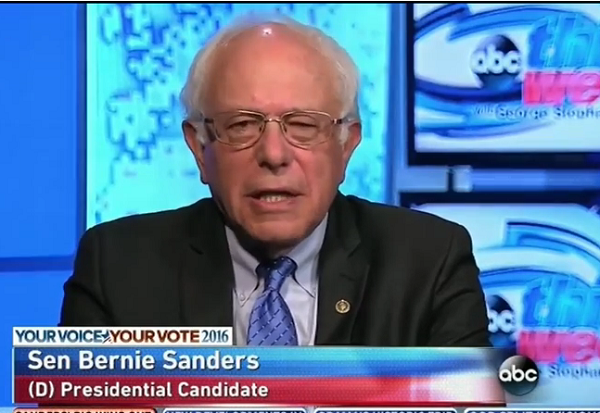 Posted by Fuzzy Slippers on March 27, 2016 12 Comments
Despite repeated attacks from Democrats and even assurances from Obama that his campaign was all but over,  Bernie Sanders is more than holding his own against Democrat presidential rival Hillary Clinton.  Having announced last fall that his campaign is "not just electing a president, it is transforming America,” Bernie is content to push forward with his "political revolution." While Democrats mutter that self-proclaimed "democratic socialist" Bernie isn't even really a Democrat, Bernie swept all three of Western Saturday's Democrat caucuses:  Alaska, Hawaii, and Washington. CNN reports:

Saturday was a big day for Bernie Sanders' quest for the Democratic presidential nomination as he swept to resounding victories in the caucus states of Hawaii, Washington and Alaska. But the delegate math is still in Hillary Clinton's favor. "We knew things were going to improve as we headed West," Sanders said at a jubilant rally before 8,000 people in Madison, Wisconsin -- a state that will hold the next major contest in 10 days. "We have a path toward victory."

That path may be an uphill climb, however, because as CNN notes, the delegate math is not in his favor.
Read More 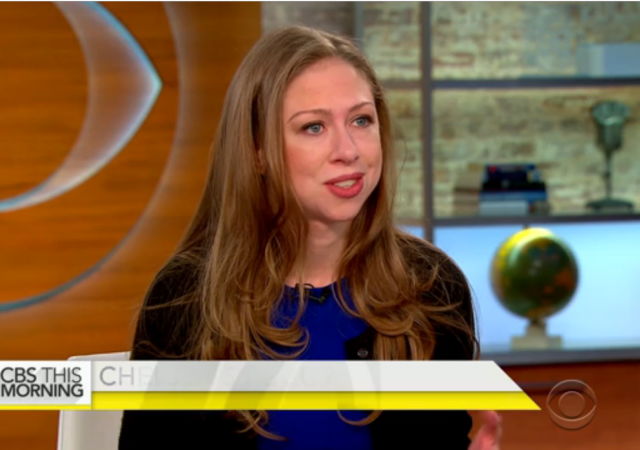 Posted by Kemberlee Kaye on March 25, 2016 20 Comments
While stumping for her mom, Chelsea Clinton suggested Hillary Clinton would be open to using Executive Action to fix the "crushing costs" of Obamacare.
Read More
DONATE