Squeeze the transcripts out of Hillary, even if she squeals

Squeeze the transcripts out of Hillary, even if she squeals

Another shoe that may drop, if someone squeals on her. 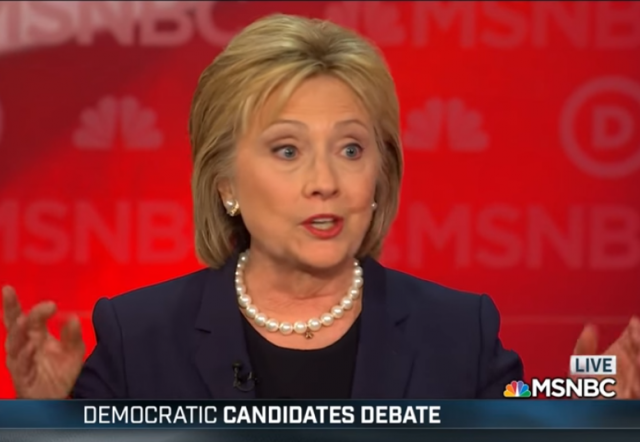 During the MSNBC Democratic debate, Chuck Todd asked if Hillary would release the transcripts of her paid speeches, particularly the three Goldman Sachs speeches for which she was paid $675,000 total.

As the question was being asked, you could see Hillary’s mental wheels spinning until she came up with the response she needed: I’ll think about it.

Hillary then quickly moved on to her robotic stump speech:

After that awkward moment, Hillary deflected in classic Clintonian fashion, by setting preconditions she knew no one could or would meet — everyone who ever gave a speech had to release all transcripts for all speeches. Hence, Hillary deflects from her massive Wall Street speaking fees:

“Let everybody who’s ever given a speech to any private group under any circumstances release them,” Clinton said on ABC’s “This Week.” “We’ll all release them at the same time.”

“But sometimes, you know, these rules need to apply to everybody.”

She said a “bunch” of her opponents in the White House race have given speeches to high-profile groups.

Bernie Sanders refuses to demand release of the transcripts. Just like with Hillary’s email scandal, he’s not willing to attack her, presumably because he hopes some of her supporters will come over to his side. But also, just like the email scandal, he doesn’t need to be in the lead, hoping others will do the job for him.

Politico reports, What Clinton said in her paid speeches:

Recalled one attendee: ‘She sounded more like a Goldman Sachs managing director.’

…. “It was pretty glowing about us,” one person who watched the event said. “It’s so far from what she sounds like as a candidate now. It was like a rah-rah speech. She sounded more like a Goldman Sachs managing director.”

At another speech to Goldman and its big asset management clients in New York in 2013, Clinton spoke about how it wasn’t just the banks that caused the financial crisis and that it was worth looking at the landmark 2010 Dodd-Frank financial reform law to see what was working and what wasn’t.
“It was mostly basic stuff, small talk, chit-chat,” one person who attended that speech said. “But in this environment, it could be made to look really bad.”

The problem is, if Clinton releases the transcripts, Sanders and other progressive candidates could take even seemingly innocuous comments and make them sound as though Clinton is in the tank for Wall Street. And if she doesn’t, it makes her look like she has something very damaging to hide…..

The person who saw Clinton’s Arizona remarks to Goldman said they thought there was no chance the campaign would ever release them. “It would bury her against Sanders,” this person said. “It really makes her look like an ally of the firm.”

With Bernie unwilling to fight the fight over the transcripts, it will be up to Sanders’ supporters, the media and Republicans. Since Hillary will squeal about turning them over, it may be up to someone who has copies to squeal on her.

A Hillary speech is worth a thousand squeals. 😀

it will be up to Sanders’ supporters, the media to fight the fight over the transcripts
———–
“But sometimes, you know, these rules need to apply to everybody.”

“Squeeze the transcripts out of Hillary, even if she squeals”

What You Wanted To Say: “Waterboard the transcripts out of Hillary, even if she squeals”

For some of the people who pay big bucks to attend those speeches, the whole point is to be in on something exclusive.

She will not release transcripts, any more than Obama has.

Actually, the whole purpose of those speeches is to line the pockets of the person giving the speech in anticipation of a return on that “investment” at some future date.

Otherwise it wouldn’t have been such an expensive speaker fee.

It’s becoming clear that Bernie doesn’t really have a plan for world conquest; all he has is a lifetime of vague Marxist bromides. The enemy is “Wall Street”; he can’t deal with anything more specific. And he can’t deal with even an obvious target like Hillary. All he can do is pitch communist whiffle balls at everyone in sight.

Perhaps he’s aware of this weakness, and is waiting for someone else to puncture her through one of her many glaring weaknesses, but I doubt it; socialists of all stripes are notoriously lacking in self-awareness.

And as for Hillary, her gross and systematic security violations haven’t torpedoed her yet; I doubt that a few silly suckup speeches will present much additional danger.

Surely there are videos (?)

If you know what she’s full of (and I think you do) then you would probably NOT want to squeeze anything out of Hillary.

Which of the following events is more likely than Hillary Clinton admitting to anything?

My vote is for number 3

1) Sen. Sanders does not need to attack Secretary Clinton over her speeches for the same reason that Mr. Trump doesn’t need to spend any money on his campaign. If the press is going to carry their water for them, they are surely happy to let them do it.

2) Why does Goldman-Sachs need to pay $675,000 to be told nice things about themselves by Hillary Clinton? I mean, this is a major world financial power we’re talking about. Isn’t it strange that they are such fragile little snowflakes that they’d fit right in on a college campus?

Her speeches and Bills were just ritualized extortion, nice business
you have here, be a shame if something happened to it, it is the stockholders money anyway, be as free with it as i like.