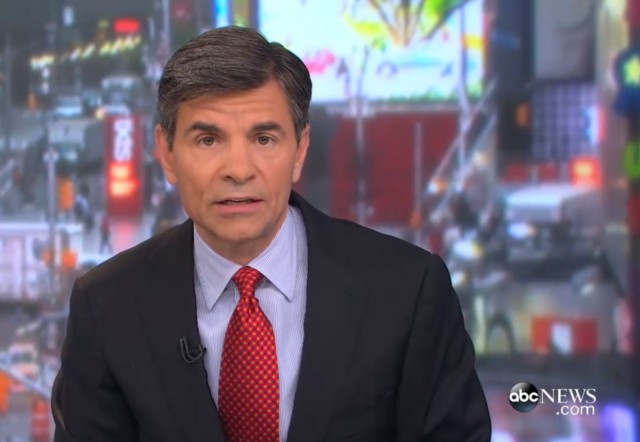 Last year, George Stephanopoulos had a particularly antagonistic interview with the author of Clinton Cash, and shortly thereafter, it was revealed that he had donated a substantial sum of money to the Clinton Foundation.  ABC stood by their man, though he did have to apologize on-air.

The Washington Free Beacon is now reporting that Stephanopoulos has simply stopped disclosing his donations to the Clinton Foundation.

ABC news anchor George Stephanopoulos has stopped disclosing his donations to the Clinton Foundation prior to his interviews with presidential candidate Hillary Clinton.

Stephanopoulos interviewed Clinton twice over the past week, once Thursday morning on Good Morning America and again on Sunday’s This Week.

During both interviews he failed to disclose to viewers that he was a donor to the foundation.

This is potentially problematic because ABC has stated that its policy requires disclosure:  “An ABC News spokeswoman told New York Times that any employee that makes a donation to a charity must disclose it to the network before covering a story related to that organization.”

Newsbusters reports that Stephanopoulos has issued disclaimers in the past.

Back in December, Stephanopoulos interviewed Mrs. Clinton for This Week. He offered this skimpy disclaimer: “[A] reminder for everyone watching, I worked for President Clinton, made charitable contributions in the past to the Clinton Foundation.” But even that was better than Wednesday’s silence on the issue.

This story reminds me of one of my favorite Branco cartoons: 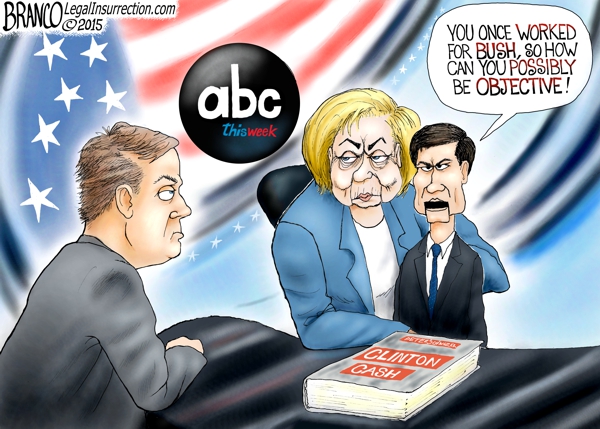 Why? Because agenda over objectivity…duh!

Then there was what Dick Morris wrote years ago in his review of Stephanopoulos’ White House memoir: “The most gripping tale of a man’s successful battle against his conscience since Albert Speer’s cliffhanger ‘Inside the Third Reich’.”

“Why is George Stephanopoulos even allowed to cover Clinton campaign?”

Because that is what he is paid to do. “Cover” to a Clinton associate is short for “Cover up.”

Really, though, how can he be allowed to cover ANYTHING political…???

Streptococcus never received the opprobrium he deserved for saving obama from his “my muslim faith” admission in 2008.

Because, at some basic level, he is no more compromised than anyone else in the MSM.

The Main Stream Media picks their own spokesmen, they give them publicity and a platform to enhance their credability, then they shape our attitudes and they decide what issues are important and what is ignored. Even those of us who are aware of the propaganda and brainwashing cannot help but be affected because thats all the unaware believe IS important to discuss. We are guilty of letting them get away with it and not providing a viable alternative in the mediums the majority of people listen to and watch.
We are guilty because as alumni and as parents we support the schools that continue the brainwashing and indoctrination and we are too busy to deal with them.
George Stephanopoulos has no credability in my opinion but the majority like him because they don’t know any better.

If there need be any greater evidence of the corrupt state of the American news media, it’s this clown.

Reality TV is the latest thing for low information voters that’s why.

because the MFM has an agenda, and nothing can interfere with it…

it’s not as if anyone’s going to say or do anything about it.

If not for double standards, the dinosaur media would have no standards. At least he is known as a Clinton operative/apologist, most are just operatives with bylines.

Oh, see there’s no problem here. He only has to disclose donations to charities. The Clinton Foundation is a slush fund and his donations to it are the equivalent of paying tribute to the don.

Nothing to disclose there!

Maybe he and ABC consider his disclosure, once made, to be sufficient.