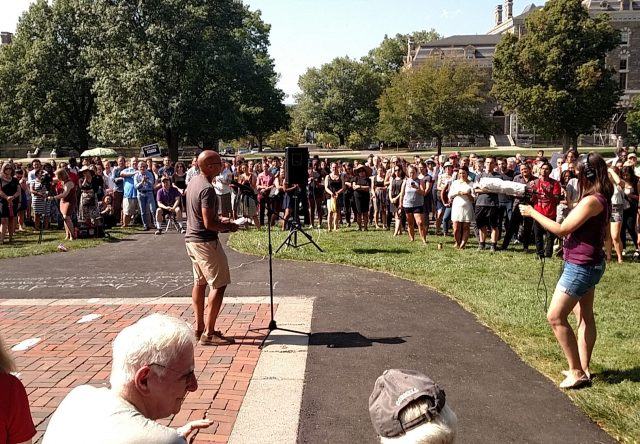 On the Cornell University campus, today, we witnessed what has become an all-to-frequent hijacking of other “social justice” causes to turn them against Israel.

This is not really surprising, given the history of the anti-Israel movement.

We have documented the social justice hijacking phenomenon many times, most recently on the Cornell campus itself, Hijacking: Anti-Israel language in Cornell Student Assembly statement about racial incidents.

I summarized years of such hijacking in my post about how a U. Illinois “anti-fascism” event turned into an anti-Israel event, Anti-Israel Rally at U. Illinois: “No Zionists, no KKK, resisting fascists all the way”:

A recent focus is the plan to hijack the “anti-fascist” movement to turn it against Israel. We recently reported how Anti-Israel pro-BDS profs organizing Antifa campus network:… 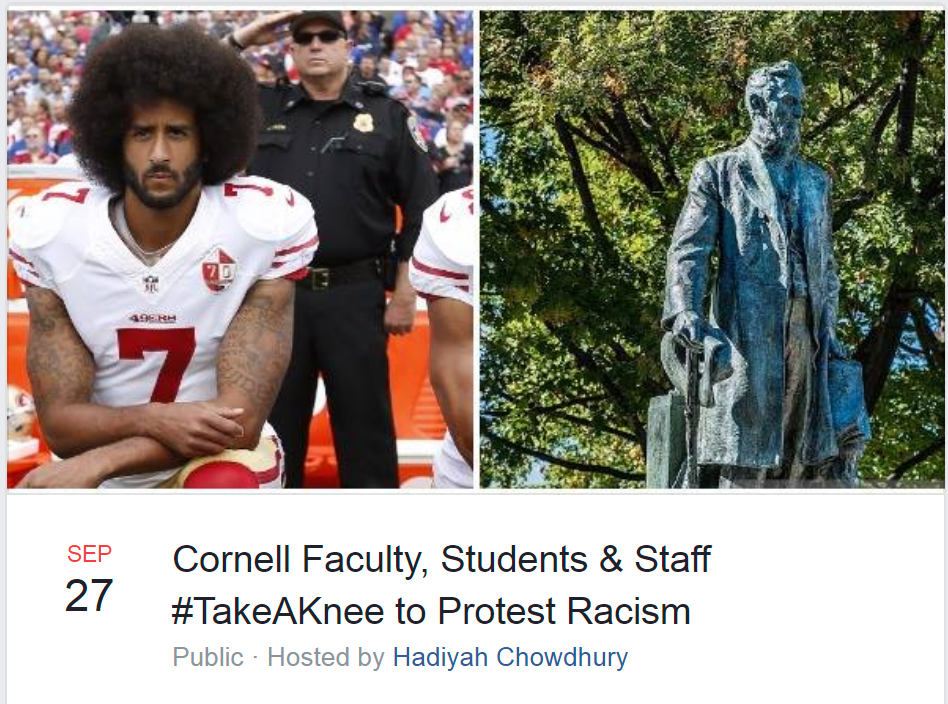 The description of the event reads in part:

Kaepernick’s anthem protest is important because it reminds us that racism is not only a matter of individual acts of harassment and aggression on the part of a few bad actors, but something that is enabled and perpetuated by institutional practices that systematize inequality and exclusion. Let us join together to show solidarity with the members of our community who have been affected by racism and hate, to hear their demands, and to work together to create a more equitable and inclusive Cornell.

The protest took place after two incidents as I previously reported:

The Cornell campus currently is in turmoil over two racial incidents.

In one, a student shouted “build a wall” near the Latino Living Center. At least two reports (Campus Reform and The New American) claim the student was Hispanic and said it to mock Trump. The Cornell administration has declined to confirm or deny those reports, referring me instead to prior general statements from university officials. I may have more on that in a subsequent post.

In a second incident, one or more students who got into a fight off campus with a black student called him the “N” word.

The Cornell Sun reported on the preparations:

In a letter announcing Wednesday’s silent protest, Prof. Tracy McNulty, French and comparative literature, and 71 other faculty members who are members of The Cornell Coalition for Inclusive Democracy said they are acting to support both black athletes and students of color at Cornell.

The group is kneeling to show solidarity with “the black students and other people of color here on campus whose civil rights and human dignity have been demeaned and violated in recent weeks by the actions of racists, nationalists, and white supremacists within our own community,” the statement said.

McNulty said that while students have been on the forefront of Cornell’s response to several recent incidents, faculty members are often not aware of things happening on or around campus.

“It’s not enough to not be racist ourselves,” she said. “We have to work on the ways in which even non-racist people … end up promoting inequality in different ways and allowing it to continue.”

“I think it’s important that faculty step up and not just passively support these demands,” McNulty said, referring to demands delivered by Black Students United to President Pollack, “but actively start thinking about them.”

Another Kaepernick-inspired protest is scheduled today, this time at Cornell University. At 12:30 p.m., professors are planning to kneel on one of the campus quads while holding a moment of silence that is as long as the typical playing of the national anthem.

“It was very galvanizing and encouraging to see the solidarity [of NFL players Sunday] emerge at a time when a lot of these black athletes have paid heavily for their free speech,” said Tracy McNulty, a French and comparative literature professor who is helping organize the protest along with the Cornell Coalition for Inclusive Democracy, a faculty group originally set up after the election to lobby and protest for the protection of undocumented students.

“They had really been risking their careers for a long time to make a statement that should be a value for everyone,” she said. “But what struck me as a professor … was that what Kaepernick was really insisting on all along was not racist treatment that he had personally experienced, but rather institutional and systemic racism.”

McNulty said that the Cornell protest, which will also feature a few speakers before the moment of silence, hopes to show solidarity with the student group Black Students United, which has advocated for universitywide diversity requirements and support for black students and other students of color.

“One concern that has been raised is, ‘Is this just going to be kind of an easy, symbolic gesture? Or is it really going to be attached to some effort to create change here?’” she said. “That’s obviously a real concern. We still feel there is a benefit to be gained from taking a moment where people are talking about these national events, and directing that energy.”

This message is sent to all faculty and academic staff

Members of the Cornell Coalition for Inclusive Democracy, a faculty group, plans to #TakeaKnee on the Arts Quad on Wednesday, September 27,  at 12:30pm for a moment of silence to bring awareness to issues of racism and violence against communities of color in Ithaca and Nationally. The group welcomes all members of the Cornell and Ithaca communities, who are interested in joining them, and have asked me to share the information about the event.

The event, while originally planned for faculty, then expanded to include students. That made for a more impressive photo opportunity, but also made it hard to tell how many faculty actually turned out. I heard that graduate students were pressured to attend, but I have not independently confirmed that.

I estimate the crowd at 300-400. Not a huge turnout for a campus this size, and again, it was hard to tell what the split was as to faculty, staff, students and community members. 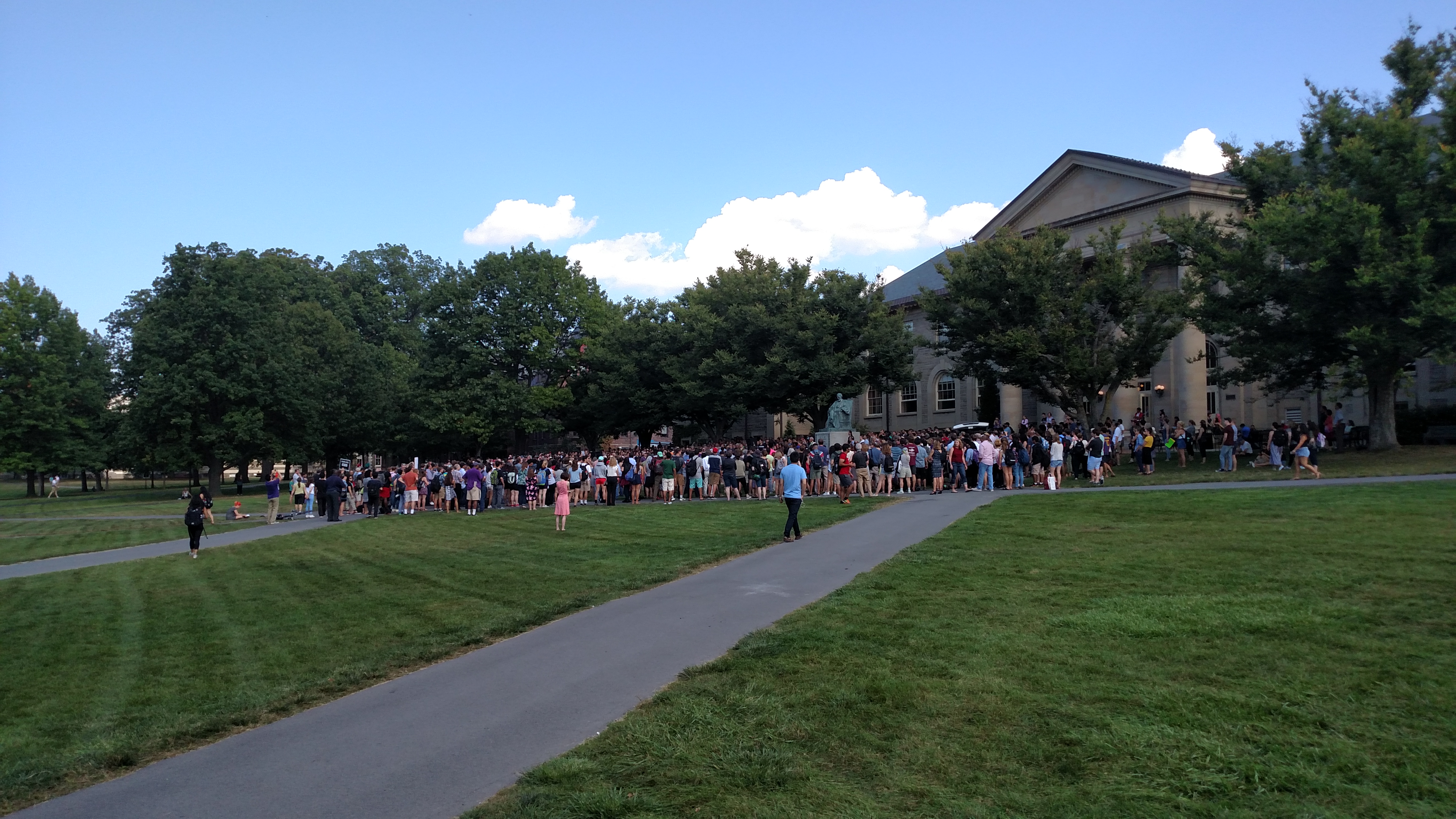 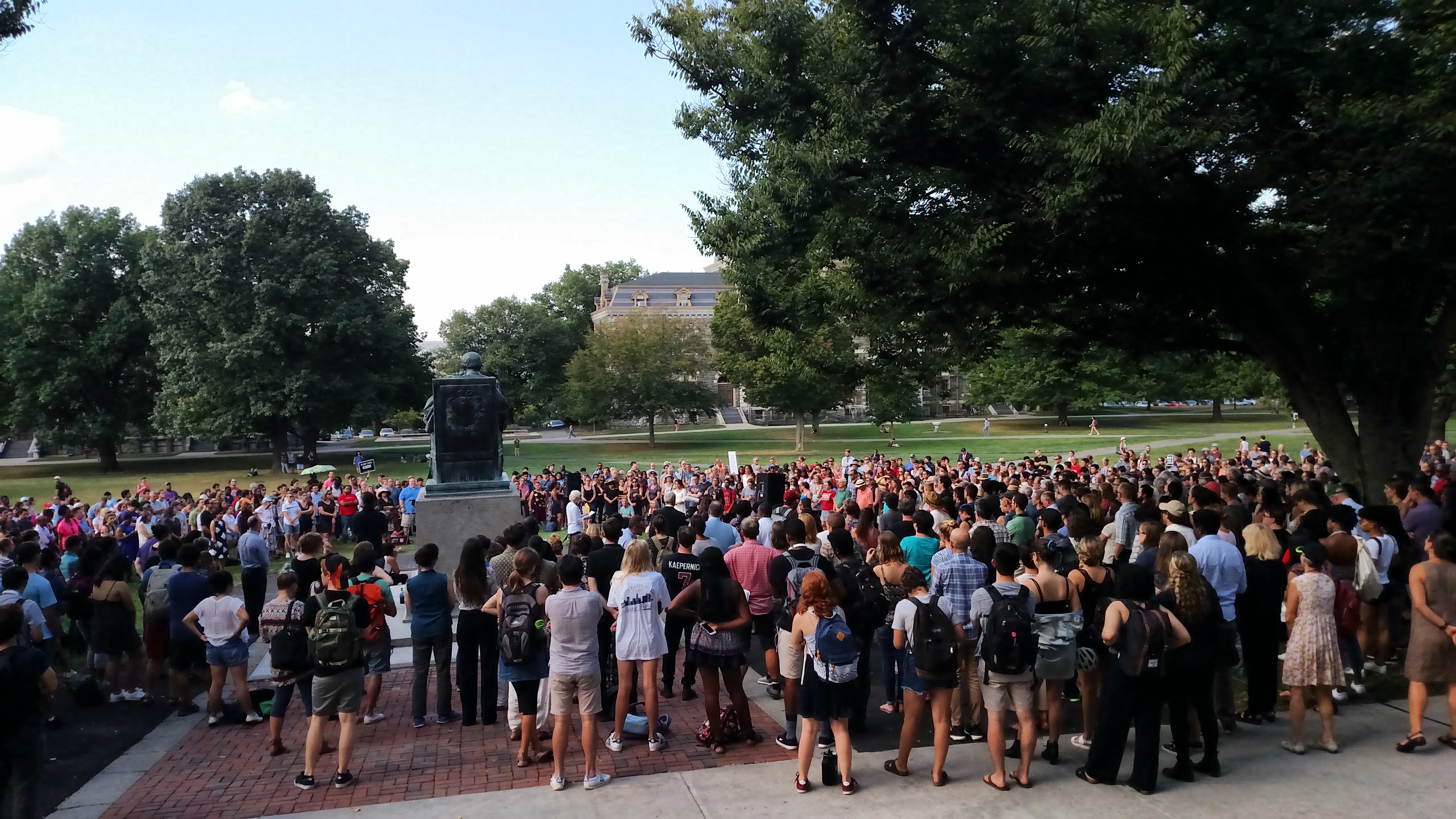 And the taking of a knee. 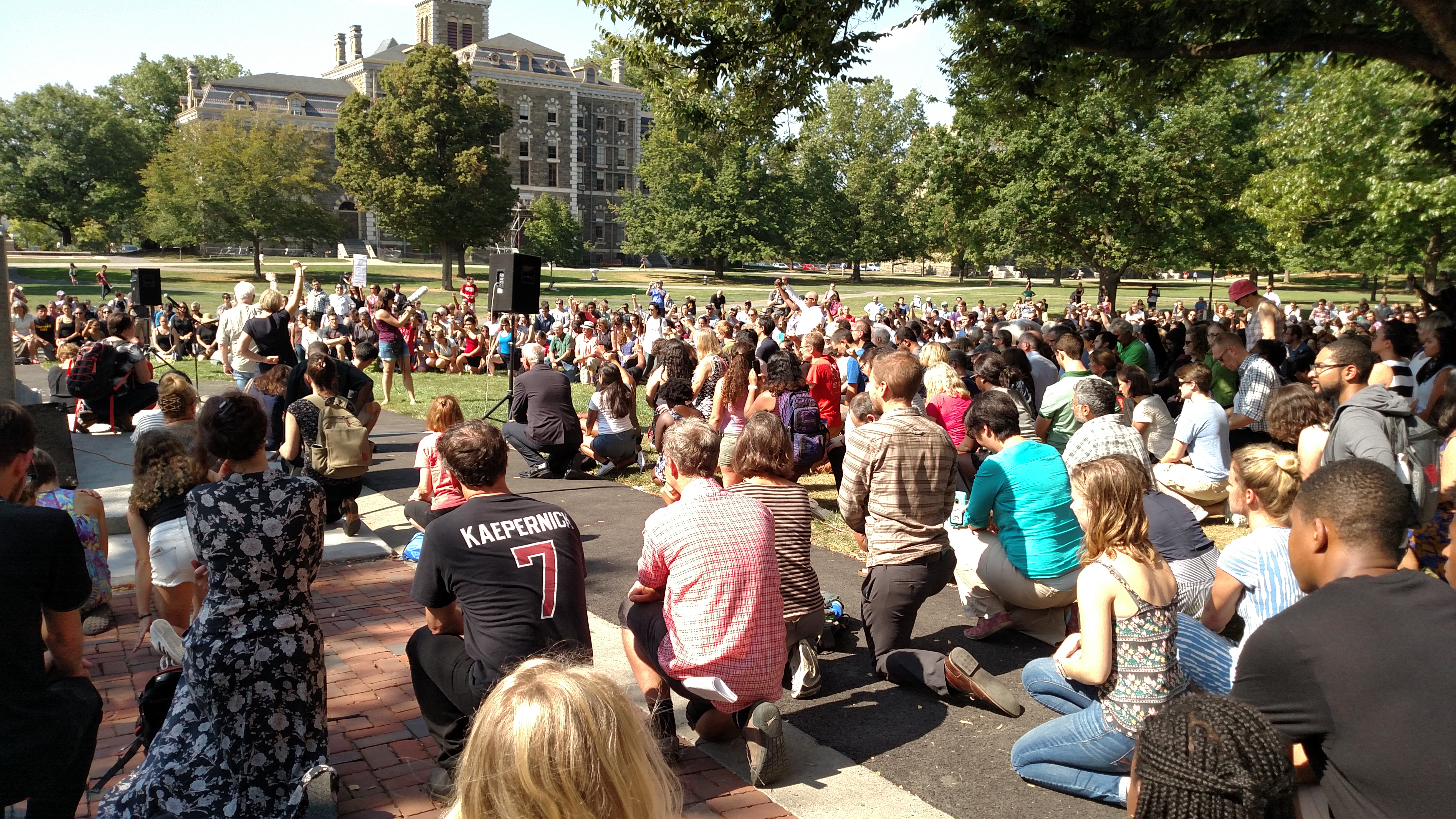 The Hijacking by Prof. Russell Rickford

While Cornell is far from the worst campus, it does have a history of anti-Israel activism, as we have covered before:

There were several speakers at the Take A Knee event, and the subjects addressed were what you would expect at such an event. Issues of white supremacy, white privilege, institutional racism, etc.

Rickford is an anti-capitalist, anti-Israel activist and supporter of the BDS movement. He is, perhaps, the most active such member of the faculty. We mentioned Rickford in a July 2016 post about a Black Lives Matter protest off-campus in downtown Ithaca, #BlackLivesMatter rally segregates speakers by race.

At the Take A Knee event, Rickford mentioned the colonization of Palestine, though I didn’t get it on video so I can’t quote him precisely. There was mild applause.

But to make the point, Rickford ended his speech by leading the crowd in a “Free Palestine” chant, just before people kneeled down.

Thank God our tax dollars are so well spent.

I don’t know how you stand it there, Professor. Great opportunity to practice patience and tolerance, I suppose.

The first step towards what I predicted here three days ago:

“Next up: Marc Lamont Hill gets NFL Truthers to take a knee against America’s alliance with Israel.

You heard it here first.”

Even though they were asked not to do it, many NFL players took a knee on 9/11- to show their solidarity with muslim murderers.

They will now take a knee on Yom Kippur – to show their solidarity with muslim murderers.

“a moment of silence to bring awareness to issues of racism and violence against communities of color in Ithaca and Nationally.”

Anybody not aware of this, because it’s what has been dominating news for how long (?), must be six feet under and, in a way, I envy them. It’s all we hear. Moreover, if they want to take a knee, they might take it about the violence IN communities of color.

I have one son in college and I actually feel guilty encouraging him to get his degree. I wish businesses would hire him without it, but I know they won’t. He is a full on conservative kid, has leaned to tuck his head down, but these are years he won’t get back. I hate how things are right now.

“Another reason I lost was because of Israel!”
– Hillary Clinton

You heard it here first.

Melanie Smith, the lady killed in the recent church shooting by a black Sudanese immigrant. Some church shootings are more equal than others in the media’s eyes.

“Free palestine.” Is that as good as free gelato?

OPERATORS ARE STANDING BY!!!

Dude, we are Pro-Choice.

The narrative grows ever more convoluted.

Babylonian Lives Matter. The bridge has been crossed.

It seems when liberals “assume their natural position” they can be easily groomed by any hijacker group.

How perverted that someone like Rickford can be given a professorship, especially at a place like Cornell. Look at his list of publications. Enough to induce projectile vomiting. Is this really a necessary political price Cornell has to pay so that it can get on with investigating the frontiers of science and engineering? If so it is a very heavy price.

How come I never see these SJWs at the ‘projects’???

I happened to be on the Cornell campus yesterday at around that time, but not in the area where this was happening.

At least we know who would knee to are Reptilian Overlords

That’s how intersectionality works. Everything is interconnected. In reality, however, it is more like a figure 8 stock car race. It is intellectual chaos, brought to us, naturally by the left. Instead of wrecked cars and bodies, intersectionality leaves us with our students coming out of college with warped minds.