Anti-Israel Rally at U. Illinois: “No Zionists, no KKK, resisting fascists all the way”

Anti-Israel Rally at U. Illinois: “No Zionists, no KKK, resisting fascists all the way”

Coalition led by Students for Justice in Palestine: “violent resistance–whether it is a black bloc or full-scale armed conflict–also has its place” 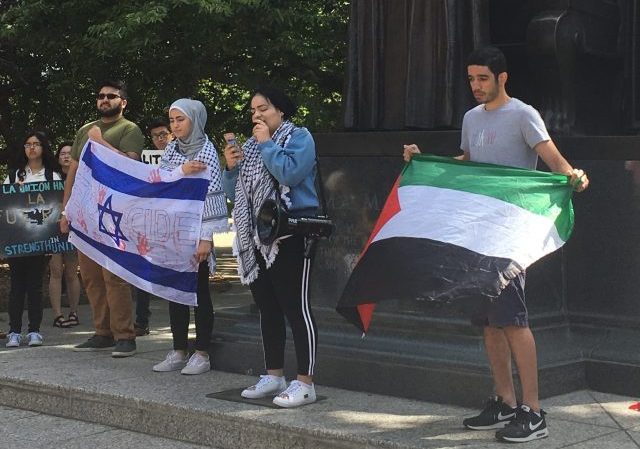 A recent focus is the plan to hijack the “anti-fascist” movement to turn it against Israel. We recently reported how Anti-Israel pro-BDS profs organizing Antifa campus network:

The anti-Israel Boycott Divestment and Sanctions (BDS) movement is notorious for campus violence and disruption directed at Israelis and pro-Israeli students and faculty.

We have featured dozens of incidents of shout-downs and disruptions of events, including physical acts of intimidation. Many of these incidents are discussed in our post, With campus shout downs, first they came for the Jews and Israel.

One vital participant in this intersectional war is the anti-Israel Jewish Voice for Peace. JVP provides cover against charges of anti-Semitism even as JVP actively stokes anti-Semitism through campaigns such as the Deadly Exchange, which blames American Jewish organizations and Israel for police shootings of blacks in the U.S.

Another vital participant is Students for Justice in Palestine. SJP has branches at dozens of universities and colleges, and provides the foot soldiers to push anti-Israel student government resolutions and to disrupt Israeli and pro-Israel speakers and events. SJP and JVP frequently coordinate these activities on campuses.

So it is no surprise that all these factors came together yesterday at U. Illinois at Urbana-Champaign, where an SJP-organized “Smash Fascism” rally was used as an excuse to trash Zionism and attack Israel as a White Supremacist fascist country. 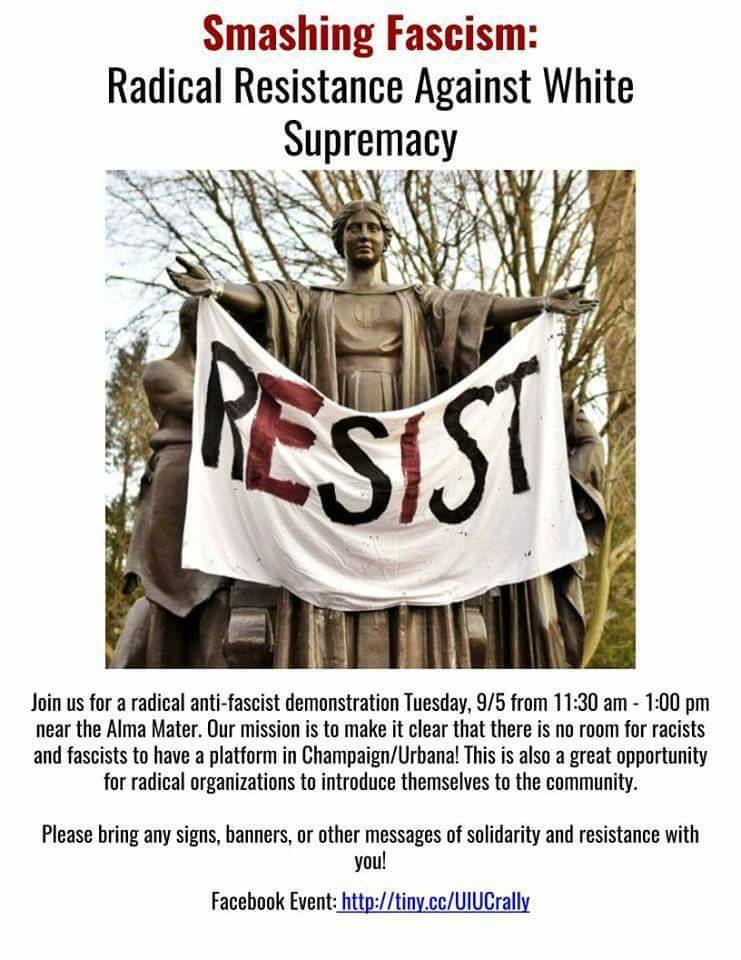 Among the co-sponsors was UIUC’s JVP group, and a JVP student member was one of the speakers attacking Israel. 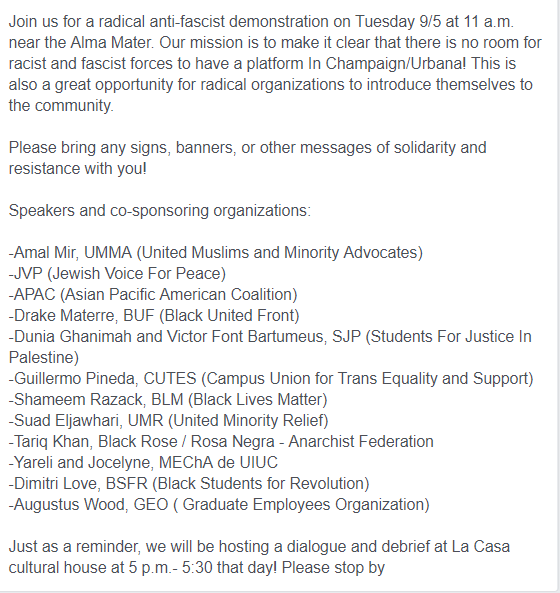 While the event poster made no mention of Israel or Zionism, in its Facebook posting, SJP made clear that Israel was the target, going so far as to day “There is no room for fascists, white supremacists, or Zionists at UIUC.”

The demand that Zionists leave campuses or be excluded from events is something that we are seeing more and more of as anti-Israel activists hijack other causes. Zionist Jewish members of the LGBT community were excluded from the Dyke March Chicago, and Linda Sarsour has demanded that there is no room for Zionist women in the Women’s March movement.

SJP reacted to the criticism, issuing a statement on its Facebook page in which it reaffirmed its intention to stop people it deemed fascist from speaking on campus, even if violence was necessary. The SJP statement, on behalf of all the event organizers, read in part:

We, the collective organizers of the “Smashing Fascism: Radical Resistance to White Supremacy” rally, are disgusted with the preemptive backlash our event has received. This opposition highlights the unholy union of American fascists, white supremacists, and Zionists which seeks to weaken and destroy intersectional movements for mass liberation….

But just as oppressed and marginalized voices are made oppressed and marginalized by unjust systems of governance and societal organization, so too do these forces seek to protect the rights and speech of literal Nazis, of white supremacists all along the political spectrum, and those who seek to implement and continue all manner of ethnic cleansing or indigenous genocide. This speech is not just expression but violence…..

We have been attacked for “advocating violence”. Apparently the language of “smashing fascism” has connotations too severe for those who believe that being nice to Nazis may curry their favor. We do not believe there is any other option when it comes to dealing with fascists and white supremacists. Granting them any platform will only lead to further normalization of their violent ideologies. Granted, violent resistance is not always the best option. Nonviolence and peaceful civil disobedience have their places and have achieved great change throughout history. However, violent resistance–whether it is a black bloc or full-scale armed conflict–also has its place. The struggle for liberation must exist on multiple levels and scales–it cannot, and will not, be confined….

Today’s rally is not a culmination of our activism, but a beginning. We will continue to resist injustices which surround us, whether it be at the hands of the US government or this University. We will fight and we will win, by any means necessary.
In solidarity,

The Co-Organizers and Sponsors of “Smashing Fascism: Radical Resistance to White Supremacy”

The event took place as scheduled, but did not draw much of a crowd, as this photo shows. 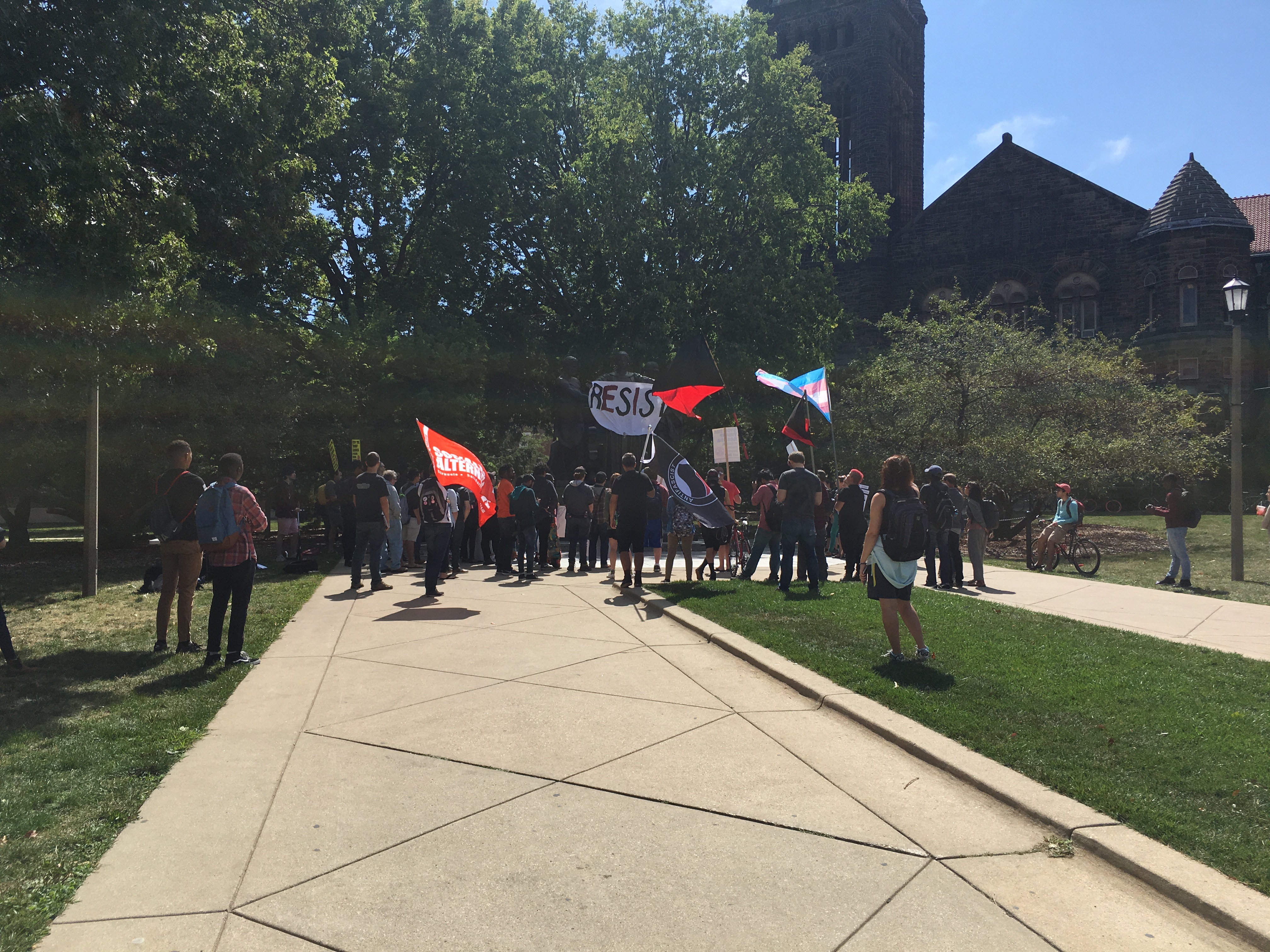 What the crowd lacked in size, it made up for in extreme anti-Israel vitriol, with an Israeli flag with bloody hand prints on it prominently displayed alongside Socialist and Antifa flags: 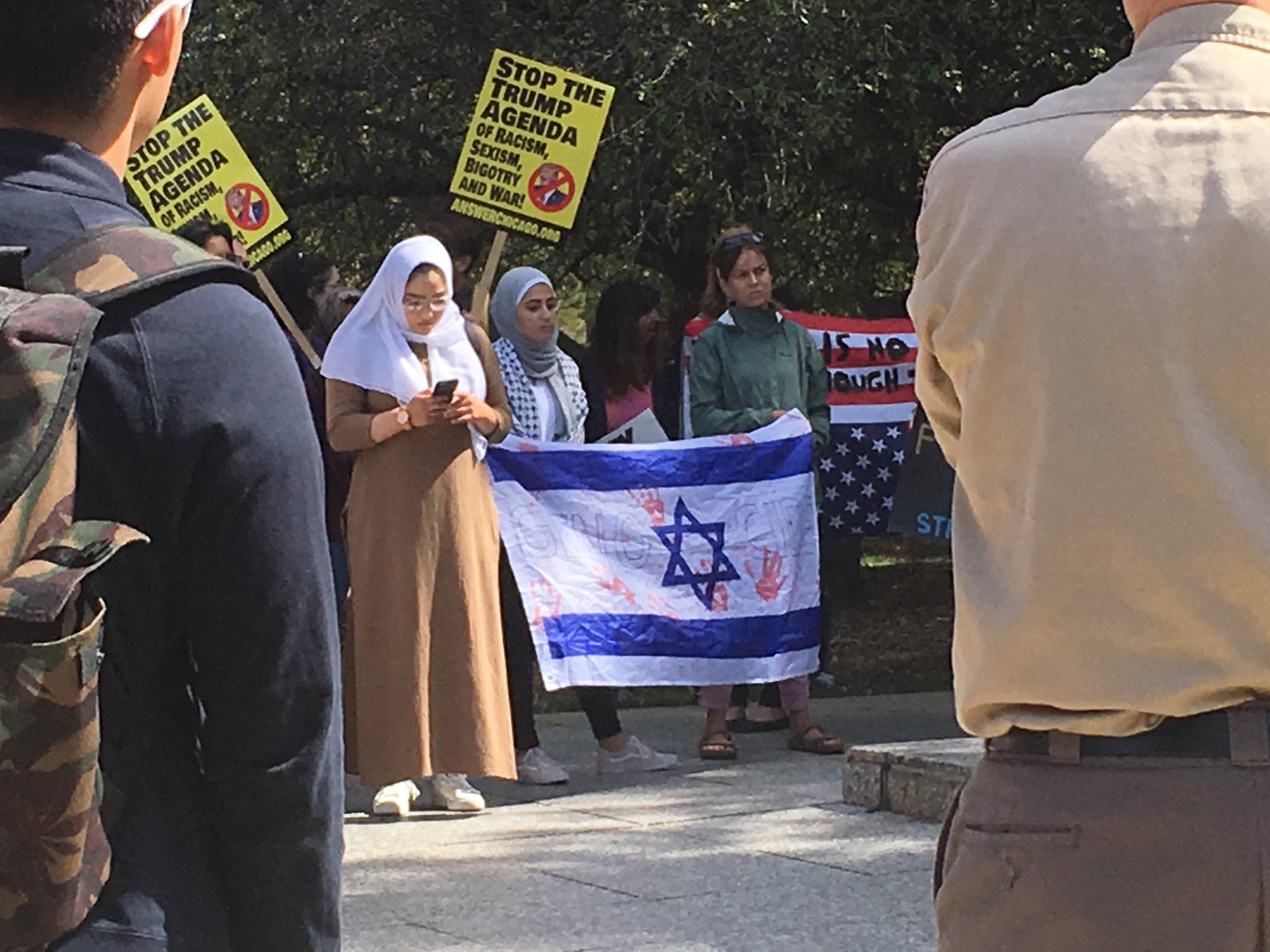 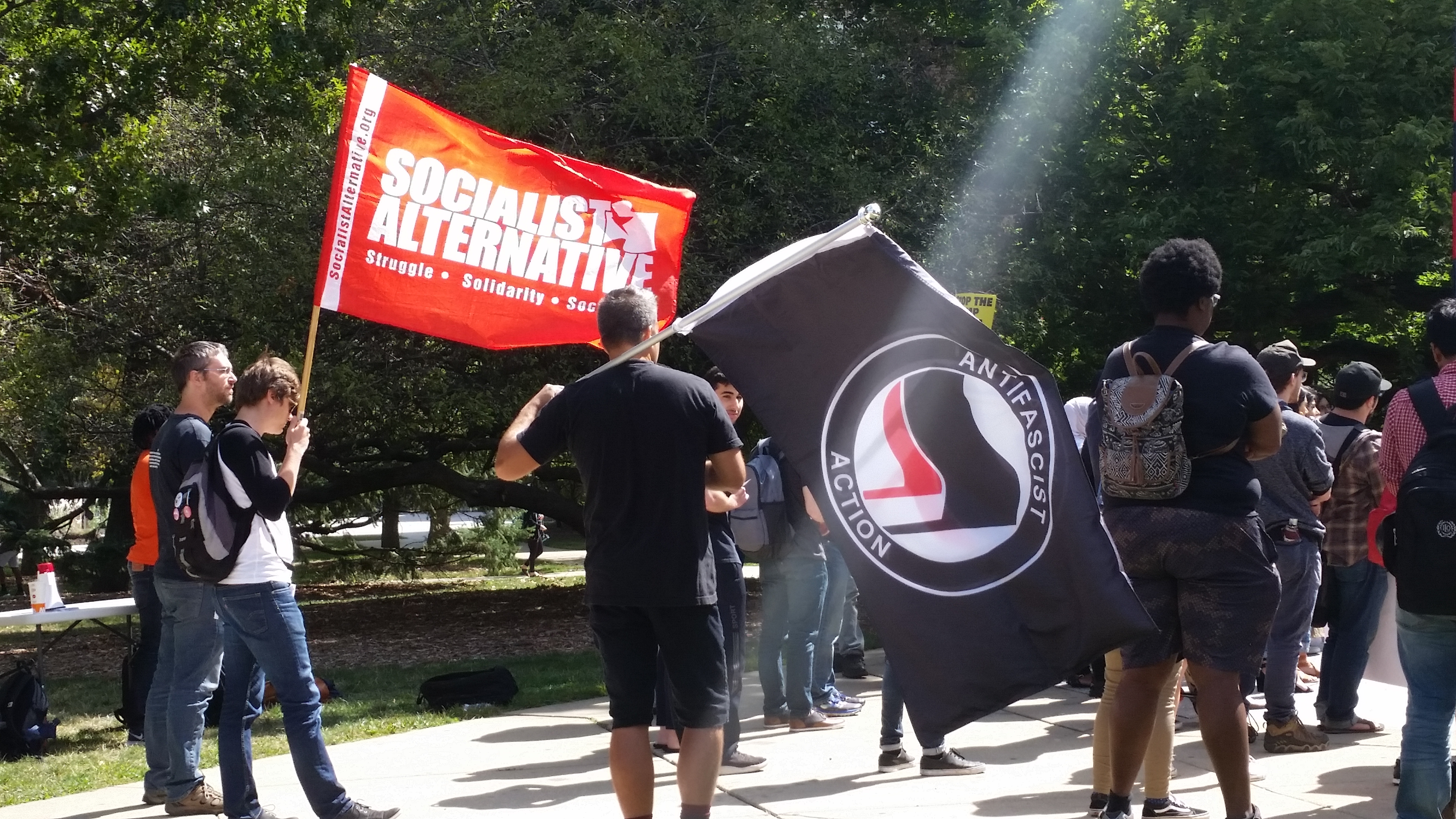 The speakers ripped into Israel, with the lead speaker calling Israel the epitome of fascism and white supremacy, and leading the group in a chant of “No Zionists, no KKK, resisting fascists all the way.”

The pro-Israel group StandWithUs condemned the event and called upon the UIUC administration to do the same. It’s press release states, in part:

StandWithUs strongly condemns Students for Justice in Palestine (SJP) at the University of Illinois Urbana-Champaign (UIUC) for equating Zionism with white supremacy and fascism, trying to create a hostile environment for students who believe in Israel’s right to exist, and advocating violence. We call on the university administration to publicly condemn them as well….

StandWithUs calls on the UIUC administration to use its 1st amendment rights to issue a clear condemnation of SJP, and affirm that Zionist students have every right to a safe learning environment at the university.

please… bring on the violence you fools.

it will be the next to last thing you ever do.

and no, that is not a threat.

I recently became aware of The Foundation for Individual Rights in Education (FIRE). It is “is a nonprofit educational foundation based in Philadelphia. FIRE’s mission is to defend and sustain individual rights at America’s colleges and universities.”

Checking the speech code rating of the University of Illinois at Urbana-Champaign, I found a “Yellow” one. This signifies “colleges and universities . . . with at least one ambiguous policy that too easily encourages administrative abuse and arbitrary application.”

And the U of I wants MY donation?

Not only no, but HELL NO!

All the left needs is to discover a charismatic leader and they can sell opening an abortion field targeting Israel’s native population.

Sad to say, this demonstration fits the standard two-step thought process of leftists
1) Nazis are violent and therefore it is justifiable to use violence against them first.
2) Everybody who disagrees with us is a Nazi.

That flier doesn’t seem to be the speaker list, but more accurately, the attendance list. Was there anybody in that ‘crowd’ who was not listed on the flier?

(And the Campus Union for Trans Equity and Support wins the award for Best Name, regardless of their political stance.)

Looking at the pictures, there must be millions of them. sk off

What strikes me, looking at the pictures, is how amazingly well financed this effort was, compared to the miniscule amount of people they got to show up for it. Those flags and banners were professionally made, and you can bet that the distributors and organizers were well paid as well.

I wonder when the story will come out as to who is really backing this – of course Soros is always a suspect, but I have a feeling, from different snippets that I have read, that Iran is a big covert source of funds for these movements.

I’ve already boycotted donations to my Alma Mater over their lilly-livered knuckling under to the NCAA and removing the Chief. So I’ll just apologize to the world for the embarrassment that UofI has become.

we need to get children, grandchildren and greatgrandchildren of survivor to protest with signs and photos of grand mufti inspecting german soldiers berlin ww2.

George Soros is spending a lot of money on this charade.

From above: We will fight and we will win, by any means necessary

Spineless politicians and institutional leadership encourage these, and other actual violence based (e.g. Anti-fa), groups to continue disrupting normal civil activities. This will stop when the politicians decide enough is enough, or the people so decide. If the latter, I believe it will not end well for the Left for it will take a lot to get the people to turn off reality TV and get off the couch, but when they do…