“I will f**king slap you” – More Cornell anti-Israel intimidation

“I will f**king slap you” – More Cornell anti-Israel intimidation 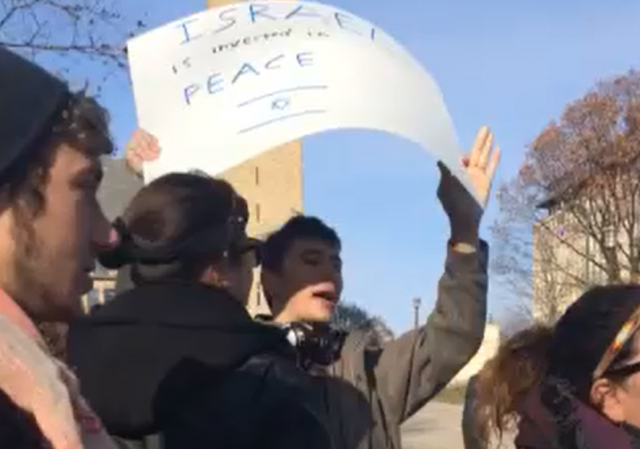 We previously posted video of anti-Israel protesters getting in the face (literally) of pro-Israel students at Cornell who were holding counter-protest signs, Cornell Pro-Israel students taunted: “F**k You Zionist scums”.

The incident depicted in the prior video actually was the second incident of the day, I have learned.

Prior to that confrontation, Ilan Kaplan, a Cornell student on leave but who is still active in the Cornell Jewish community, alleges he was accosted as he held a sign, had his sign torn out of his hands, had water thrown on him, and was threatened. Here is my interview with Kaplan:

The short clip in the video of a woman yelling “[inaudible] anything else, I swear to God I will fucking slap you” is the only video I have been able to locate of that first incident. The student who filmed the clip told me that she thought her phone was recording the whole time, but it wasn’t.

Both the student who made the recording and Kaplan identified the woman as kat yang-stevens, the same non-student Ithaca activist in the prior video who taunted a pro-Israel student. See video at bottom of post. (She had pulled a similar move on me last spring). She was accompanied by a male student member of SJP and a non-student (Amanda Lickers, the one who shouted “Fuck You Zionist Scums” in the earlier video.)

Here is a screen capture of Kaplan being confronted: 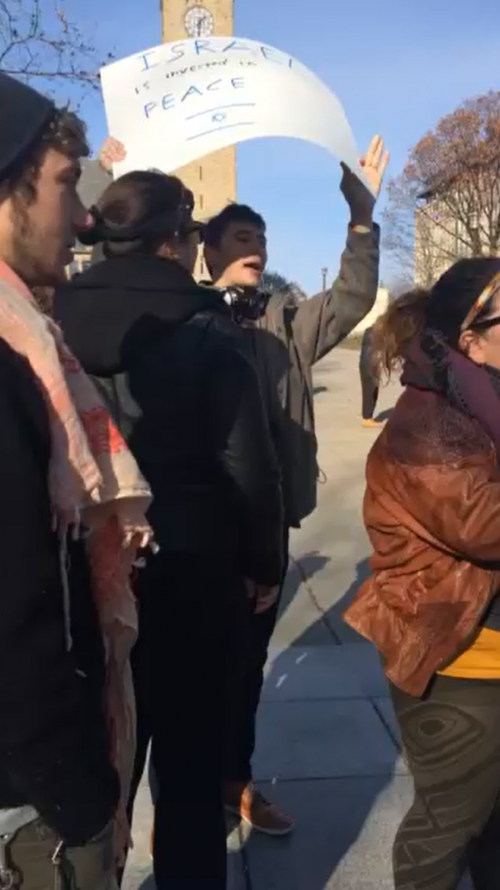 Cornell declined to comment because the matter is under investigation.

This incident reflects the aggressive posture of SJP and its allies on campuses nationwide, which often includes outside non-student agitators and activists.

The confrontational nature of anti-Israel protests appears to be by design, part of a strategy of disruptive “direct action,” whether dorm stormings, disrupting speakers or taking over student government offices. At some point, such direct actions cross a line, as they did at Cornell.

Bullying alive and well on college and university campus as long as it’s against certain groups, such as jewish folks, Israeli defenders, Christians, etc.

Saludos to Legal Insurrection for providing us news of events which never makes it into those organs which shape the great majority of public opinion.

I hope she gets help.

When I visit my daughter at UNC Chapel Hill I pull my hoodie up, put my hands in my pocket, and mumble, ‘muh muh muh muh muh’ to myself, because if I don’t drown it all out when on campus I’m afraid I’ll knock somebody out.

Arts on this subject don’t always get the most comments, but it is essential they go up. I link them all the time and I cannot be alone in that.

The loud portly woman is very aggressive and too close to the pro-Israel people. This is not okay. The Anti-Jewish rant is
never ending and dangerous because the threats are real as we’ve seen on our TV’S. Why does SJP think theirs is the only voice to be heard? These pro-Israel students don’t control the conflict between Israel and Gaza. However, they do need to feel comfortable at the university.
Personally, I remember the PLO (Palestine Liberation Organization) in California 45 years ago. They were very aggressive; turned to kidnappings & robbing banks. I realize this isn’t that group but this is how they started on college campuses.

we have a very controversial situation: people who call themselves liberals are fascists in reality, anarchists and other trash. The drive force of anti Israely rallies is simple anti Semitism. They do not care that Palestinians are ruled by national socialist parties like: Muslim brotherhood and Hamas. They are occupiers. Israel left Gaza in 2005 and it was a mistake. Now Palestinians attack Israel and liberal-fascists, our administration, islamofascists regimes like uatar, turkey and left oriented media like CNN, BBC, Euronews and other info garbage support them.
Where presidents of the schools? Why attacks on the Jews are freedom of speech but the truth about Israel is intolerable?