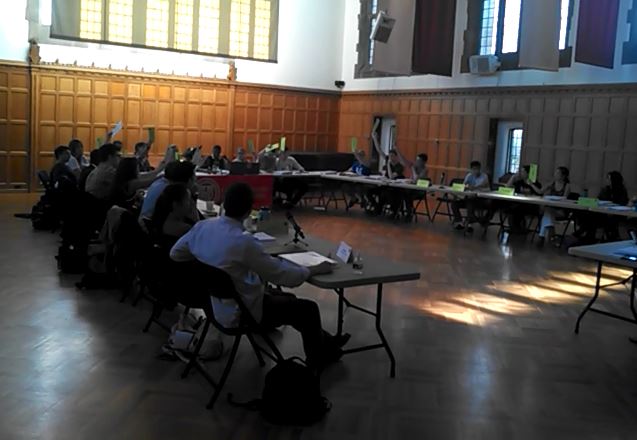 The Cornell Student Assembly voted late this afternoon to table indefinitely a Resolution to Divest from companies doing business in Israel.

The decision foiled the last-minute stealth move on the eve of Passover to push the Resolution forward so that the vote would take place next week in the middle of Passover: ALERT: Sneak Passover Anti-Israel Divestment attack at Cornell.

Even getting to that vote to table required that the Assembly overrule the decision of the President of the Assembly not to allow the motion to table until the Resolution was presented. Under no circumstance was there to be a vote today on the substance of the Resolution, this was a procedural decision to take it off the agenda.

This is a crushing defeat for SJP — maybe one of the most decisive yet on any campus.

They tried to pull a fast one, and never even were able to present their Resolution.

This reflected widespread opposition not only to the substance, but also a resentment of students who see SJP tryig to usurp campus dialogue. As one Assembly member wrote to me:

[Resolution backer] wants to see 20 year old college students form firm opinions on an issue we know very little about and have no responsibility for.

Expect claims that speech was stifled. To the contrary, there is no “right” to take up Student Assembly time on a Resolution that had so little support it couldn’t even survive a procedural motion. Such procedural motions are contemplated in many legislative bodies, such as the U.S. Senate.

A major shout out to the pro-Israel students who had less than 48 hours notice that the Resolution would be presented today. The Hillel student leadership worked tirelessly.

Students for Justice in Palestine managed to do something amazing — bringing the Cornell Israel Public Affairs Committee and Cornell J Street U. together. Whatever disagreements they may have on policy, the two groups were completely united in opposing the Divestment Resolution.

Will SJP take over student government offices like at U. Michigan? Stay tuned.

This victory ought to make celebrating this Passover all the more poignant.

The reaction is indicative of the overall discussion as a whole.

Liberals don’t think…they just emote. What an udderly, infantile creature she is.

Ten bucks says the hysterical screamer will get a PhD and indoctrinate the next generation.

Unfortunately there is more accuracy than humor in your statement.

It is well past time to balance academia. The first place to start is with tenure. There should be no such thing as tenure at state universities. No public employee should enjoy that kind of job guarantee.

In private business the golden rule is that no one is bullet proof. That means the origination must be able to function if any given employee is lost.

Response video, for the young woman with the red headband:

Wonderful news!!! Thanks for the great coverage.

She has a very large personal space bubble.

She also has absolutely no class.

Wm the Conqueror! Our hero!

[…] Jacobs0n, a Clinical Professor of Law at Cornell Law School, reported on his blog, Legal […]