Sing Matisyahu’s peace anthem One Day, after disruption of Israel Independence Day event by Students for Justice in Palestine 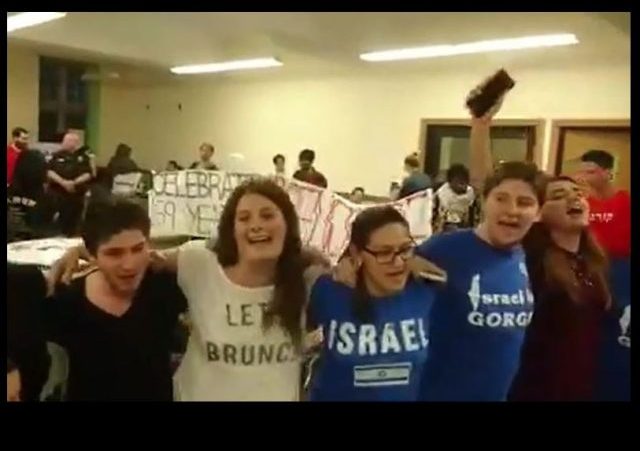 At Cornell we mostly have great students. This is a story about some of those great students at an Israel Independence Day event who reacted in a powerful way when a small group of students from the anti-Israel Students for Justice in Palestine disrupted the event.

You may recall that there have been problems with anti-Israel activists on campus disrupting any positive event about Israel. Anti-Israel activists were the vanguard of the campus anti-free speech movement, as I documented in With campus shout downs, first they came for the Jews and Israel. At places like Berkeley, Jewish students have to find non-disclosed locations for pro-Israel events.

In the latest attempt at intimidation, Cornell Students for Justice in Palestine organized a disruption and takeover of an Israel Independence Day event organized by Hillel and various pro-Israel student groups.

The event was Celebrate Israeli culture and Independence Day with Cornell Hillel!

Based on the Tel Aviv Summer Festival, Lilah Lavan is a night of food, music, and all of the other aspects of Israeli culture.

Stop by Aroma Cafe for the classic Israeli Ice Coffee that you’ve been craving all semester! How about a stroll through an Israeli ‘Shuk’ to pick up some dried fruit and sunflower seeds?

Enjoy the awesome music, games, and other exciting surprises that will occur throughout the night!

Cornell Students for Justice in Palestine protested and held a die-in at an Israeli Independence Day celebration in Anabel Taylor Hall on Monday, angering many of the event’s student hosts and leading to arguments with Cornell Police who provided security at the event.

The festivities in Anabel Taylor were sponsored by Cornell Hillel and held with several other Jewish campus organizations to celebrate Israel’s declaration of independence in May of 1948.

“It’s all about spreading positivity, really just to let people have a good time,” said Cornell Hillel President Brandon Cohen ’18. “We are just here to celebrate the Jewish people having a state, with anti-semitism on the rise around the world.” ….

Organizers eventually agreed to let SJP members into the private event once they promised police that they would not protest and agreed to swipe their Cornell IDs.

Within five minutes of entering, however, four members of SJP held a sign that read “Celebrating 69 years of Genocide” while others handed out fliers. Most members lay silently on the floor, some covered in flags, as part of the die-in protest….

Cornell Hillel Executive Director Rabbi Ari Weiss said he was disappointed that the protesters had lied to gain access to the celebration.

“They said that they were coming as individuals,” Weiss told The Sun. “We asked them if they would protest, they said they wouldn’t, they lied. When they came in, I said ‘Did you lie to me?’ and one member shrugged their shoulders and nodded their head yes.”

The SJP students lied? Let me put on my *shocked* face. 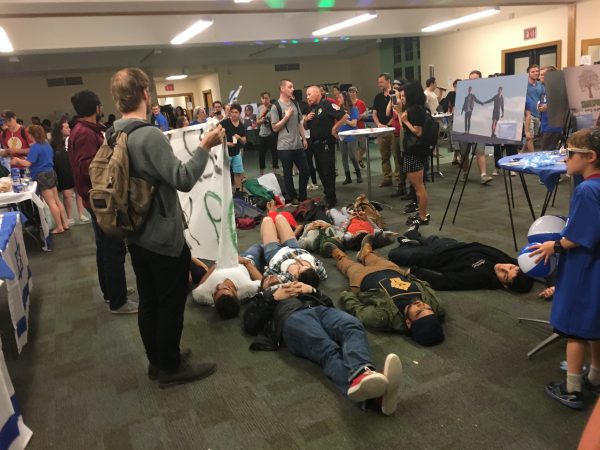 One of the Cornell SJP students, Piragash Swargaloganathan, conducted a pro-Palestinian event recently and I’ve not heard any reports that pro-Israel students tried to disrupt it or take it over. I guess that being able to disrupt others’ speech while having your own speech protected is a pro-Palestinian privilege.

The SJP students, having physically disrupted and taken over an event, then claimed that they were the victims of intimidation, as The Sun reported further:

At one point on Monday evening, SJP members told police that someone had attempted to push and trip one of their members during the altercation, but the officer said he had not seen anything. SJP members then told the officer that they would file an incident report.

SJP student Hadiyah Chowdhury told The Sun that the SJP students were the victim of police racism:

“We were really disrespected by the police, who ignored an incident of physical harassment in which one of our members was shoved,” she said. “We are really disappointed by the way CUPD treated us and are certain it was a result of racism.”

Instead of meeting force with force, the pro-Israel students went one better.

They formed a large dance circle near the “die in” protesters: 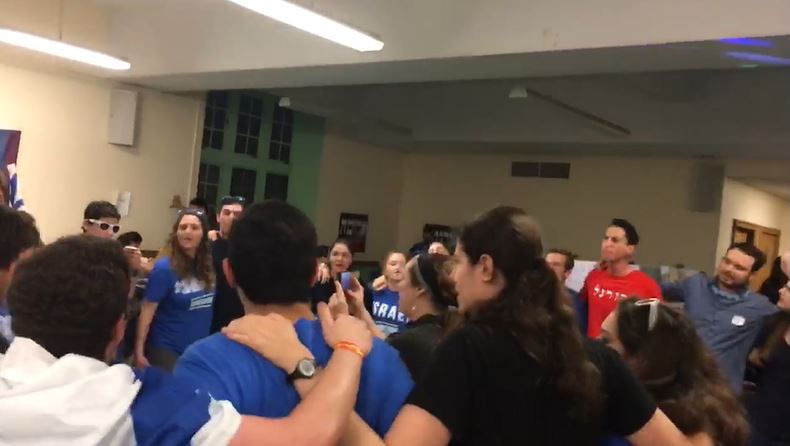 They sang and danced to the Matisyahu peace anthem One Day. Matisyahu, you may recall from our prior posts, is the Jewish American singer who has been targeted by the BDS movement because he refuses to sign a pledge condemning Israel.

As this video compilation shows, the pro-Israel students sang and danced in reaction to the disruption.

Student Inna Grant provided this statement on why the pro-Israel students reacted as they did:

“When students came in and disrupted the event, after promising not to, it was an uncomfortable situation for all of us. I think it’s difficult for anyone to have to deal with such hatred and lies, but what resulted was a beautiful moment of taking the high road and singing about peace and hope and love in the face of negativity and hate. I know that all we want is peace, and protests like this make it harder to achieve that- but responses like ours give me hope that we can band together as a community and face the lies head on and show the world that we will not stoop; we will rise above and we will stand taller.”

“I don’t think there is a better song we could have played than Matisyahu’s “One Day.” It is a song by a Jewish artist that preaches love, peace, and unity, and at the same time contains a powerful critique of SJP’s decision to protest at an event organized by Cornell’s Jewish community, “we all lose when they feed on the souls of the innocent.” This song states the very reasons why we were celebrating Israel’s existence and the future we all want to see in that region. It really represents the antithesis of SJP’s mission, and I think that’s why everyone at the event so spontaneously started locking shoulders and danced together. SJP’s hate will never win the day, but love will, every time.”

“I could not be prouder of our students. I felt they connected to the hope and promise of the Jewish state, the “one day” vision of peace which the song captures.”

Did I tell you we have some great students at Cornell? I’m so proud of them.

For those of you not familiar with One Day, here’s Matisyahu:

Note the one kid lying on the floor in the foreground, with his legs crossed. That’s pretty lame for a “die-in”.

A “die in” in general s pretty lame.

The only thing I can imagine that’s even lamer is a “nude in” to end Islamic terror. And do yourself and your sanity a favor. Don’t try to imagine it. It’s taken me over fifteen years to put it and the geriatric hippie Berkeley types who thought it was a good idea out of my mind.

Inclusive vs liars.
Joy vs intimidation.
Celebration of life vs the cult of death.

Where these SJP cockroaches suspended?

Professor, my son is one of those great pro-Israel students at Cornell who participated in this event. You certainly have captured the true nature of this event and the students’ reaction to the SJP disruption far better than the student paper, The Daily Sun, which made it all about the protest of a dozen students and their snowflake complaints.

I do think that Hillel came across as quite naive in accepting the lies of the SJP members.

Thank you for giving Cornell’s Pro-Israel community their due.

Thank you for raising a great son.

good for them in their creative response to the “die-in”… they are learning the lesson:we need to be prepared to fight ‘death’ with life.

Agreed. It’s a good story, and one that needs to be told more often as I suspect it may occur more often than we hear, but the best part is the response to the “die in.” Forming a singing, dancing circle around ever-lying, always-victim dupes on the floor is priceless. The video should go “viral.”

Professor Jacobson, thank you for sharing what these wonderful pro-Israel students did in the face of hatred. Perfect!! I’m so proud of them. As retired CU staff, I’m interested in (finally) being able to voice my conservative and Pro-Israel views within the Cornell community. Please let me know how I may become involved.