They call it solidarity, but it’s just more BDS Settler Colonialism in which other peoples and causes are subjugated to the anti-Israel cause. 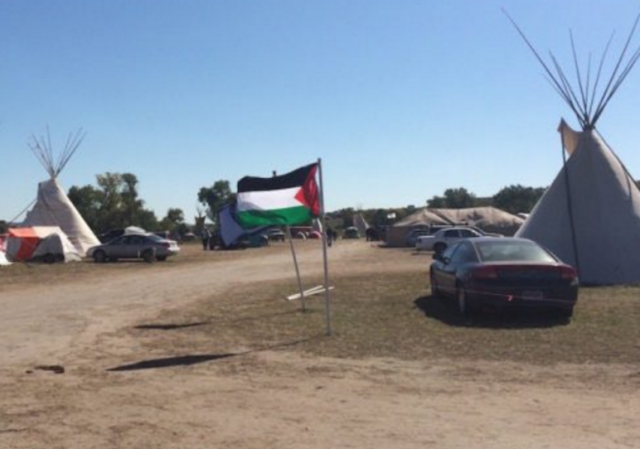 In that post, I provided links and images to the efforts to make the Palestinian cause the centerpiece of the Standing Rock protests.

It was a classic hijacking of another cause in which expressions “solidarity” are the means to subjugate another cause to the anti-Israel effort. It’s part of a pattern I have explored before, BDS is a Settler Colonial Ideology.

As I documented, the expressions of solidarity “From Standing Rock to Palestine” put “Palestine” at the center. When the anti-Israel cause comes to town, often in the form of the Boycott, Divestment and Sanctions movement, it all about them.

And so it continues in the weeks since my last report. The Standing Rock protests have continued and intensified over what they say is a danger to their water supply and burial grounds. They also say that the pipeline is a violation of treaties between sovereign Indian nations and the federal government.

As the protests have intensified, so too has the infiltration and exploitation of the Standing Rock protests by anti-Israel activists.

Once again, attention is directed towards the anti-Israel cause, with the Sioux being the BDS and anti-Israel prop. Even the terrorist Popular Front for the Liberation of Palestine is getting in on the act, PFLP salutes Native and Indigenous struggle at Standing Rock #NoDAPL:

The Popular Front for the Liberation of Palestine extends its strongest support and solidarity to the indigenous resistance at Standing Rock against the Dakota Access Pipeline and the settler colonial project of genocide and plunder in North America.

“It is no surprise that the United States and Canada, built on the genocide of indigenous peoples and the plunder of their land and resources, are today the strongest settler colonial partners of the Zionist state engaged in its own settler colonial project of destruction in Palestine,” said Palestinian leftist writer Khaled Barakat in an interview with the PFLP media office.

The anti-Zionist Mondoweiss is intensifying its focus on the Standing Rock dispute, and of course, it’s all about “Palestine”: Palestinians join Standing Rock Sioux to protest Dakota Access Pipeline and Why Standing Rock matters.

Here are some videos and images showing the extensive effort to make “Palestine” the centerpiece of the Standing Rock Sioux pipeline dispute, to conquer and subjugate the needs of the Sioux to the needs of the anti-Israel movement. This first video features Mohammed Nabulsi, who disrupted an Israeli Studies event at UT-Austin, as we previously reported:

Here are some photos posted showing the Palestinian flag placed prominently at the Sioux protest encampment. (Click on images for source)

The woman next to the flag was the author of one of the Mondoweiss posts. 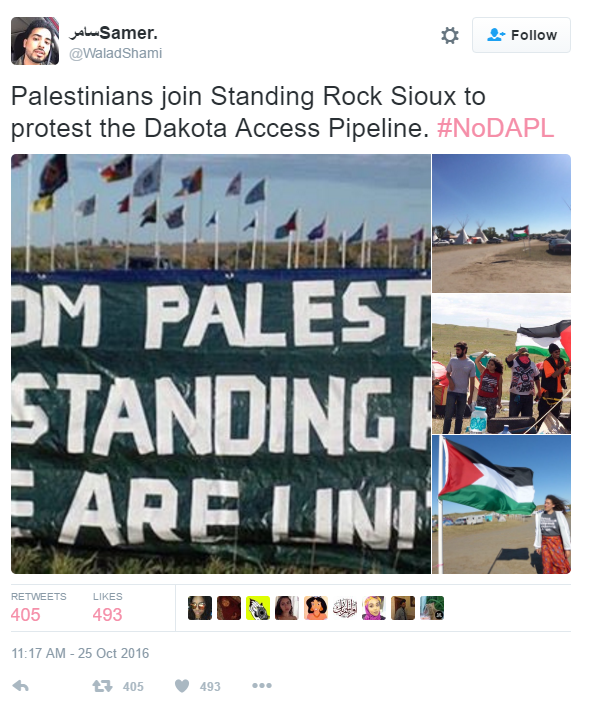 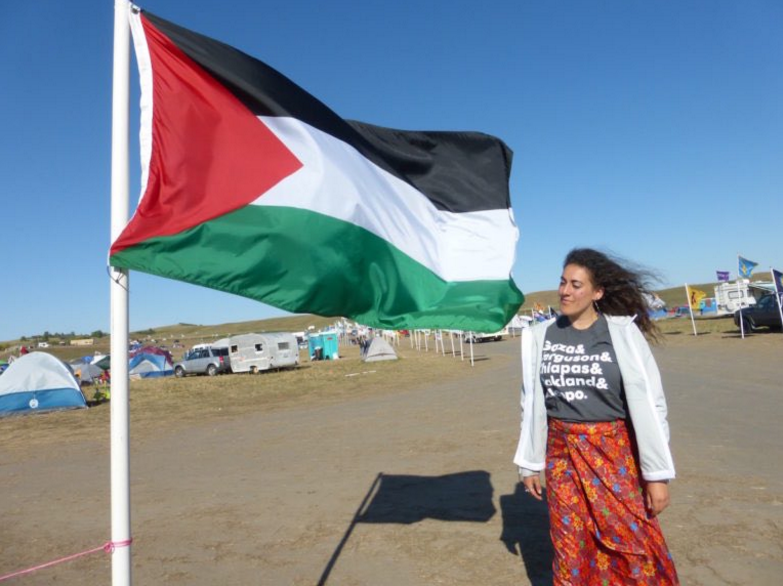 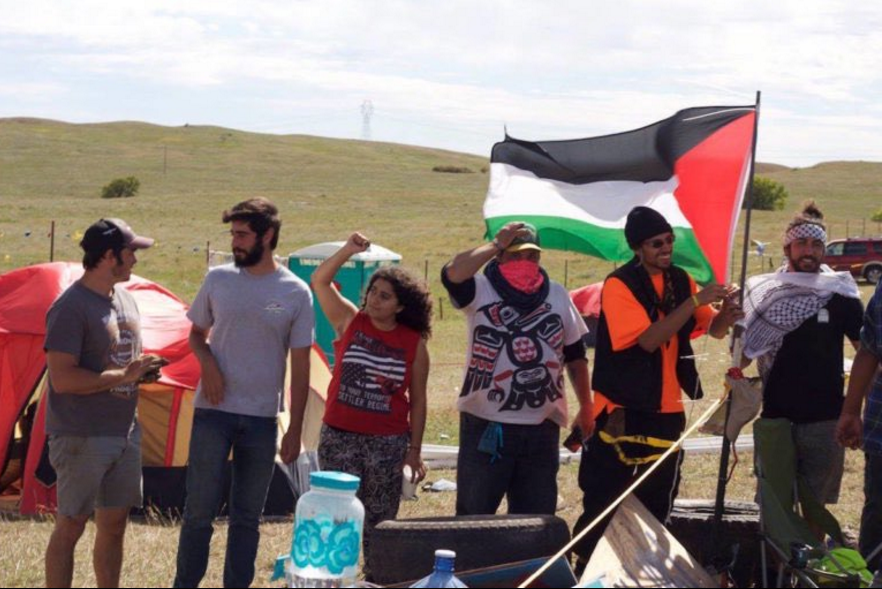 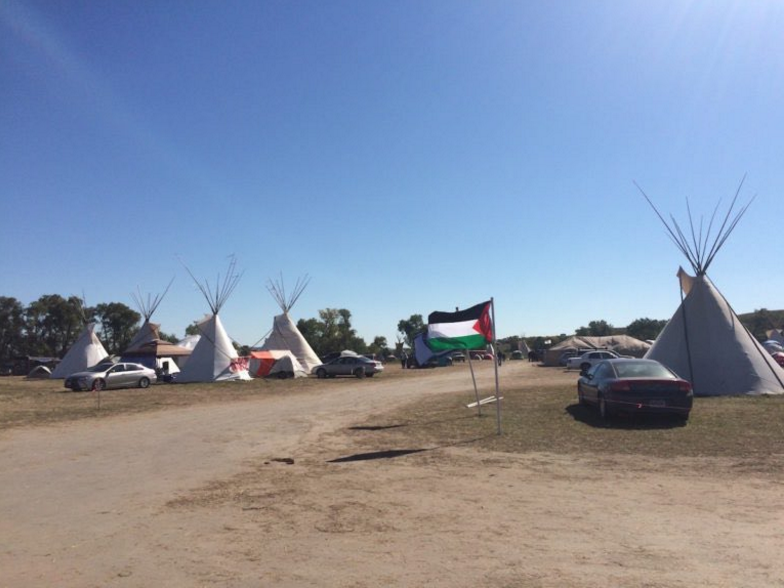 The Samidoun organization, which is organizing protests for Rasmea Odeh, is involved. 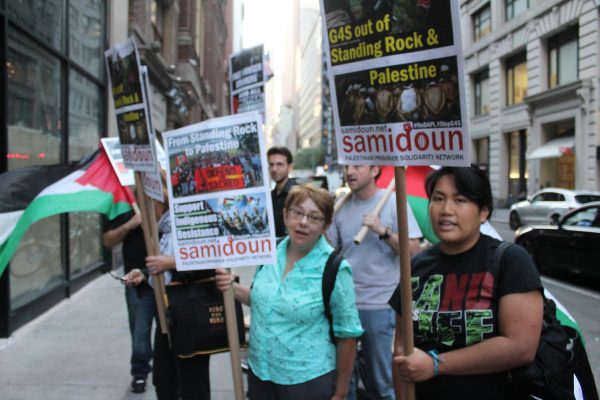 And the annual conference of Students for Justice in Palestine injected itself into the dispute, for the benefit of “Palestine” of course. 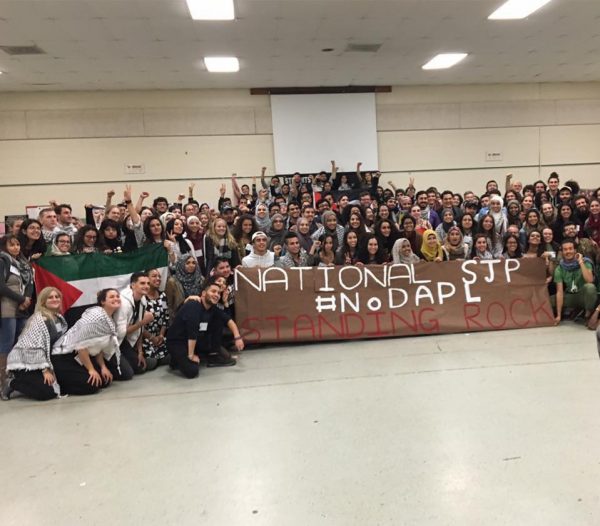 Here are some other protests posted — note the constant theme that makes the anti-Israel cause the center of attention. 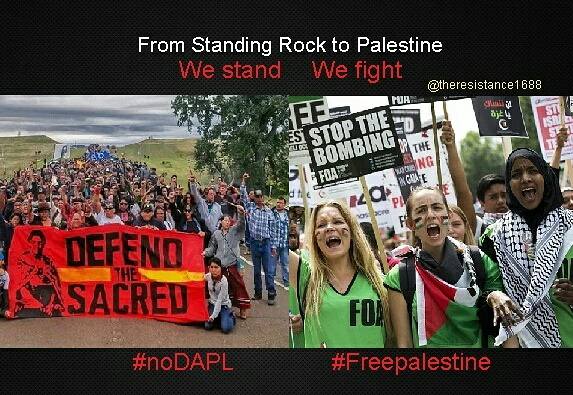 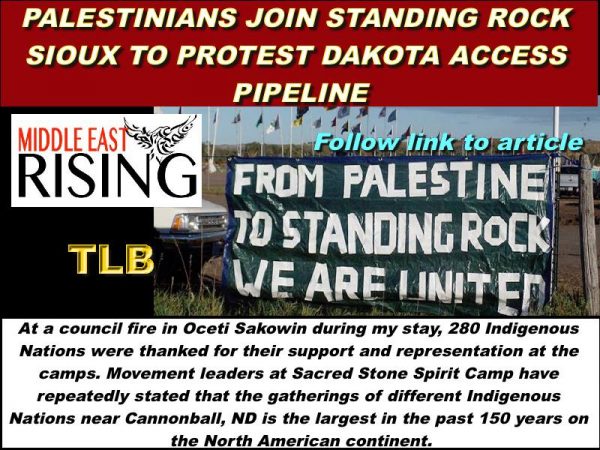 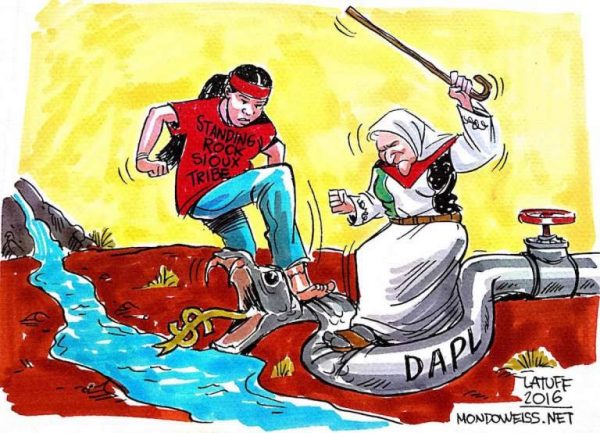 It should be painfully obvious that “Standing Rock to Palestine” effort and Palestinian solidarity with the Sioux are just another example of BDS settler colonialism, taking over and subjugating other peoples and causes to the anti-Israel effort.

It’s all to do with anti-Israel activism, and very little to do with helping the Sioux.

The pro Israel people have jobs. They can’t take off for every demonstration. They are not professional agitators funded by the likes of a George Soros.

All the goofy sob’s in one place. One big lightening bolt….. I can dream.

I guess their apartheid argument was insufficient to rationalize a progressive war including invasion and mass abortion of Israelis.