Once again in Ithaca (NY): “If you are not a person of color, please wait” 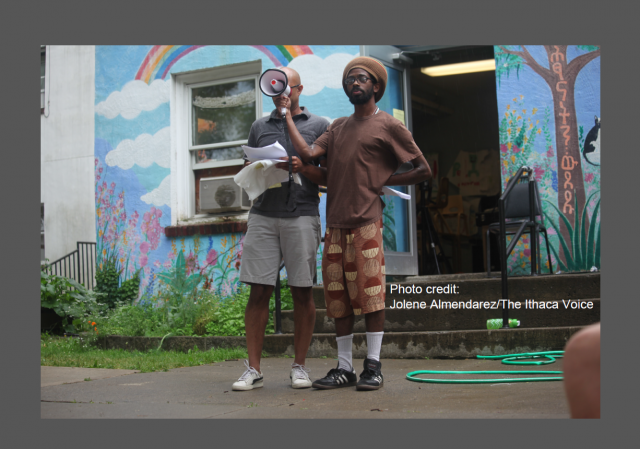 In January 2016, I reported how an Ithaca (NY) Black Lives Matter rally over the death of Sandra Bland and others set up a procedure to segregate speakers by race, with “people of color” being given priority over whites, At anti-racism rally, Whites allowed to speak only after People of Color:

We ask that people of color who would like to bring written statements/speeches to address the ralley [sic] please let us know below so that we can add you to the list of schedueled speakers.

There will be an open speak-out afterwards for those who just want to speak.

Disclaimer: If you are a reporter at this event we will not be answering any questions.

Disclaimer: If you are a white person at this event note that the voices of people of color will take precedence in rally space.

My post was not viewed favorably by the organizer who instituted the policy and commenters on the event page: 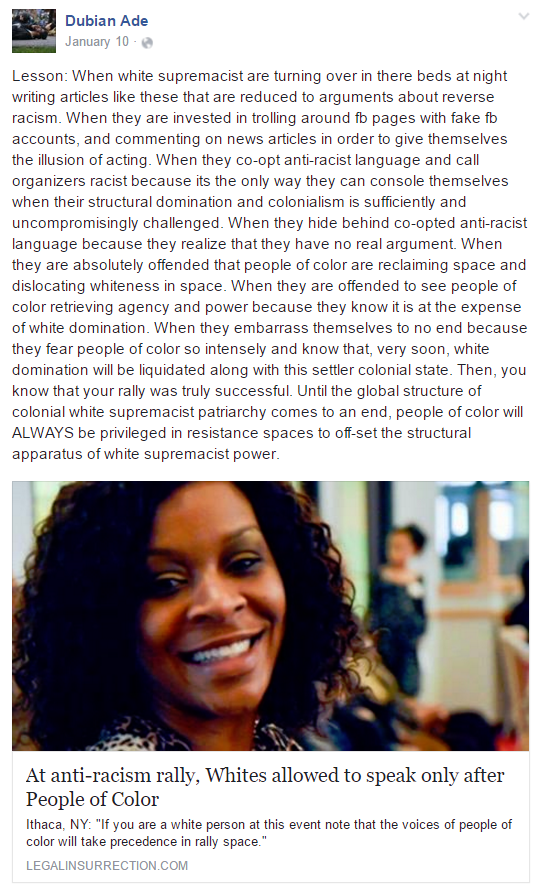 The segregation of speakers just happened again, at a rally on July 8, 2016, with non-people of color speakers told to sit at the back of the speakers’ line.

About 400 people marched from the Southside Community Center to the Ithaca Commons Friday night and called for an end to systemic racism and police killing black people.

[Black Lives Matter Ithaca organizer Dubian] Ade addressed the crowd once the march ended at the Bernie Milton Pavilion. He said people of color would get priority on the megaphone.

“If you are not a person of color, please wait,” he said. “We prioritize our voices since we are the ones who are the most affected, and our voices are usually the ones that get pushed out”

I’m sure there will be harsh words for me for having that “radical” thought.

gee, i think i’ll find as many pictures i can carry of white people that have been affected by police brutality and just see what kind of response i get

I guess white isn’t a color.
But, try painting without it.

An Ex-Cop Organized a Black Lives Matter Protest — and Protestors Got More Than They Bargained For | PJ Media
https://pjmedia.com/trending/2016/07/09/an-ex-cop-organized-a-black-lives-matter-protest-and-protestors-got-more-than-they-bargained-for/

The police forces in the various states have been integrated since at least the ‘70s, and the lawsuits asking why there were no blacks yet in management in Houston were in progress when I started law school (early ‘80s). I know this because one of my professors, a Republican, was the judge in one of the cases. His summary afterward was “You mean to tell me that in all these years, no black man has passed the test for sergeant? Not one? Just comply with the law.” He had been appointed and did not win re-election, because he ran as a Republican when Texas was a pull-the-lever Democratic state.

The first and second wave of senior black police officers have reached retirement age, by now. Richard Sanford is one of them.

The charge of “racism” in our police forces is also directed against black police officers and senior officials. For that reason, it tends to fall more than a little flat, for me.

Good article about a courageous man. I enjoy seeing things like that where someone decides they can make a difference, then backs it up with action. Too few people like that in our society. I wonder how many walked away while he was talking?

The Rainbow paradigm establishes a prism structure that divides the spectrum of humanity into color schemes. Fight the Rainbow!

“This is not the 21st Century I was promised”.

It also isn’t the one I worked for. But I haven’t stopped that work.

Still, I do take some solace from the fact that these racists are a minority in America, though I STILL look forward to the day when black Americans vote their interests and not their race.

When the lights go out in America it won’t matter what color you are.

What exactly is the problem in Ithaca? Is there not enough mental health help available? Covering a nice car with weird bumper stickers is strange. Okay, I can accept that, but being so guilt ridden as to accept treatment like that cries out for the need some intense counseling.

What would they do if an obviously white person who identified as black wanted to speak? Have him or her speak after the obviously “colored” people, yet before the white people who ID as “white”?

Also, if they’re against “colonialism” then why are they participating in the political process here? By their lights (as dim as they may be) because this country was founded through colonialism one would think they wouldn’t want to have anything to do with a county with such a criminal origin. I’m not saying they should leave and “go back to Africa,” but they should stop participating in a system that is illegitimate, or risk being called (*gasp*) hypocrites.

I don’t mind waiting to speak out in favor of #blacklivesmatter. I’m very patient; I can wait forever.

Using the color spectrum criterion, Professor Jacobson will be the very last person in line to speak.

I’m guessing these people would say you can’t spell “Ashkenazi Jew” without “Nazi.”

I was composing a response in my head while brushing my teeth and came back to find there was no need. I wonder if that wasn’t a leftist troll trying to make the site look bad.

Black racism is one of America’s worst-kept secrets.

In (black) author, Larry Elder’s book, “The 10 Things You Can’t Say in America,”

Chapter 2: “White Condescension is as Bad as Black Racism.”

LukeHandCool (whose older sister is one of Larry’s favorite callers to his radio show. Whenever she calls, the screener always lets her through)

I see ol’ Doobie is at it again! Dubian Ade is a well known lying, race-baiting agitator (but I repeat myself) in Ithaca who achieves nothing, yet heaps mounds of self-congratulation upon himself.

Oh, dear. I forgot to tell my employer I had white privilege while I worked my way up the ladder over the course of 40 years. Maybe I could have made it in 35.

Some pigs are more equal than other pigs.

BLM: Privilege based on race is wrong! (except when we do it).

Garbage like this makes you wonder just how marginal third wave activism if the media weren’t utterly and shamelessly beholden to them.

They don’t want to fight the legacy of segregation and racism, they want to further it, only in the other direction.

Isn’t it amazing how quickly the persecuted become the persecutors adopting those tactics they so vehemently railed against?