Just like in Ferguson and the #BlackLivesMatters protests, trying to blame Israel. 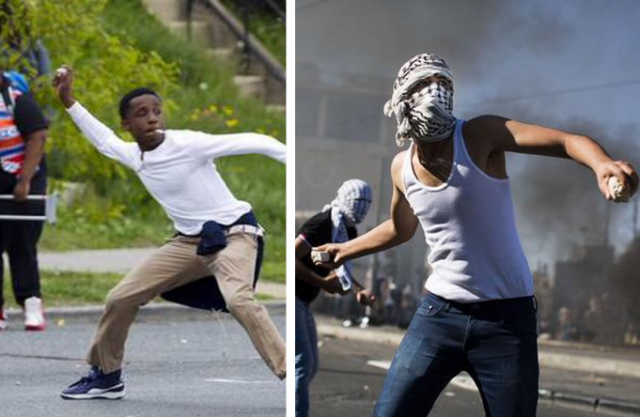 This is becoming a recurring theme.

When there is a riot or other protest in the U.S., particularly if involving minority communities, “pro-Palestinian” activists try to hijack it and turn it into a criticism of Israel.

We saw it in Ferguson where “pro-Palestinian” activists spread lies that Israel trained the Ferguson police, and actually embedded themselves in the protests to try to turn the protests into anti-Israel protests.

The same thing has happened repeatedly with #BlackLivesMatters protests, most notably the dangerous blockade of the San Mateo – Hayward Bridge.

This is part of the emerging theme of anti-Israeli activists trying to tie unrelated movements, such as fossil fuel divestment, to Palestinian issues.

Now we are seeing it with the Baltimore riots.

The usual suspects, like Max Blumenthal, were out in full force immediately, trying to establish a link between the Baltimore police and Israel because some police trained in an Israeli form of martial arts: 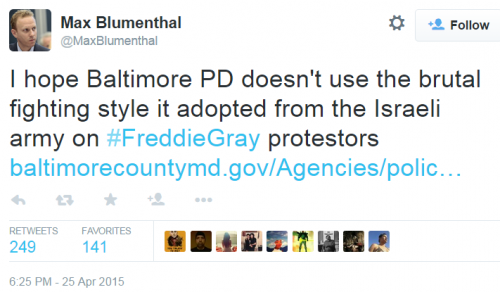 Which, of course, made no sense, but it’s the tactic used by anti-Israel activists in Ferguson: 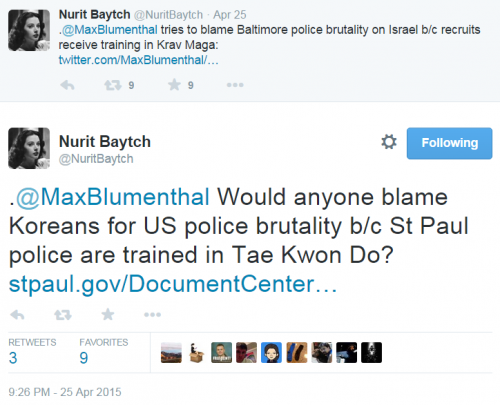 (added) Blumenthal also is claiming that a sound device used to disperse crowds in Baltimore, LRAD, was “tested on Palestinians.” The source Blumenthal links to in his tweet is one of Blumenthal’s own articles from 2011 where he acknowledges LRAD is a U.S. made device. But Israel apparently uses the U.S. made device, so there you go, Blumenthal gets his deceptive anti-Israel hook: 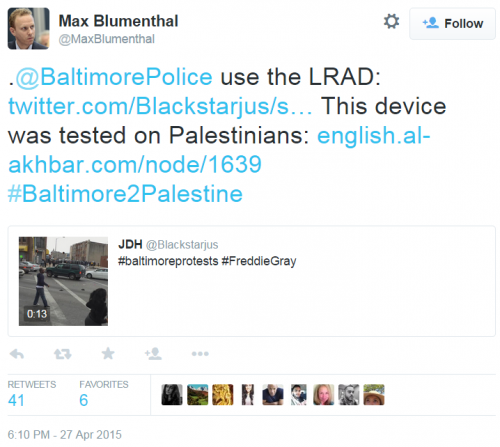 This is the same propaganda tactic used in Ferguson, where the fact that Ferguson and Israeli police used the same brand of American-made tear gas was used to try to blame Israel for Ferguson police actions. It’s sick and twisted, but repeated it often enough, and it becomes internet truth. 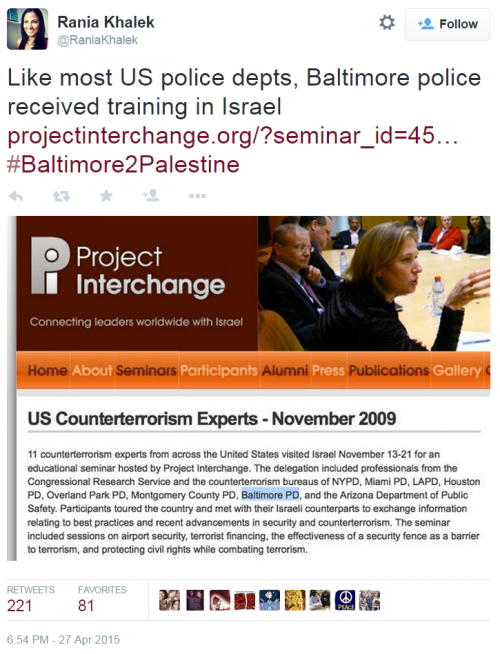 Even she admitted it didn’t mean Israel was responsible for the actions of the Baltimore police, so why bring it up? Oh, right, it has great propaganda value. 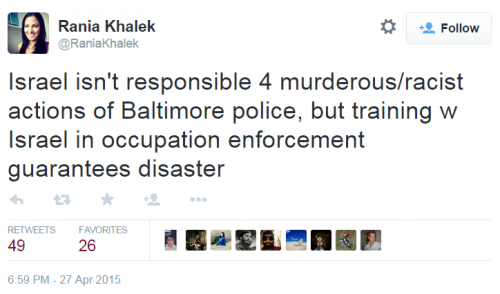 Attorney and law professor Noura Erekat referred to the Baltimore riots as an Intifada: 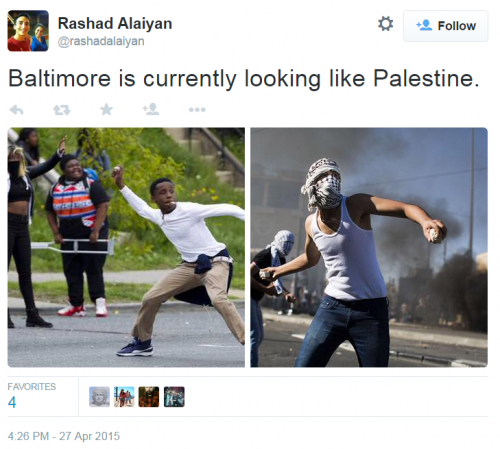 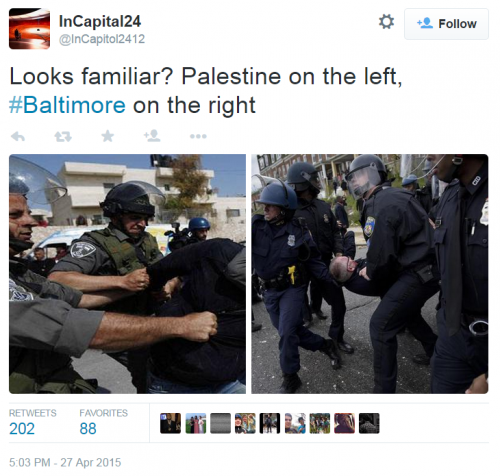 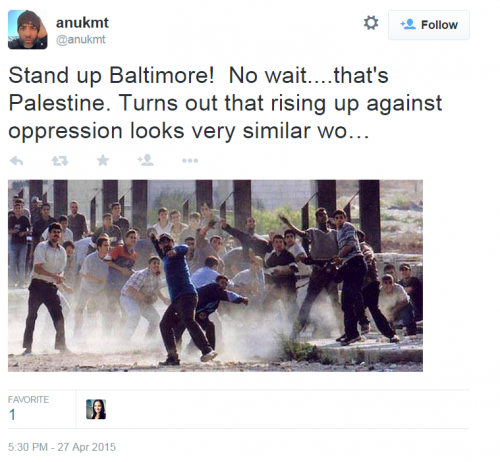 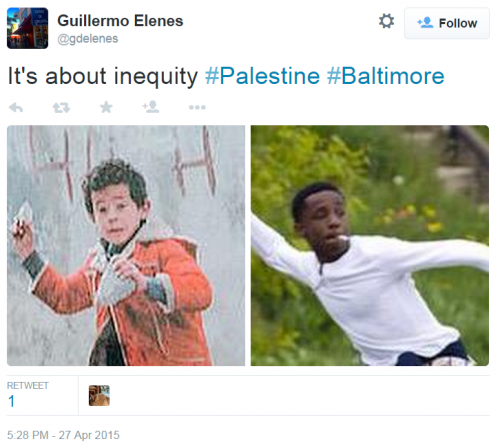 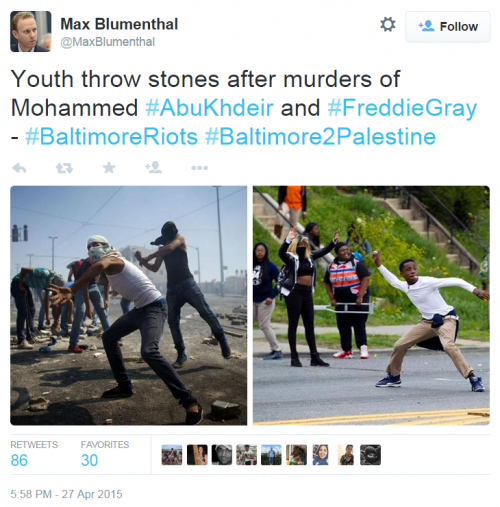 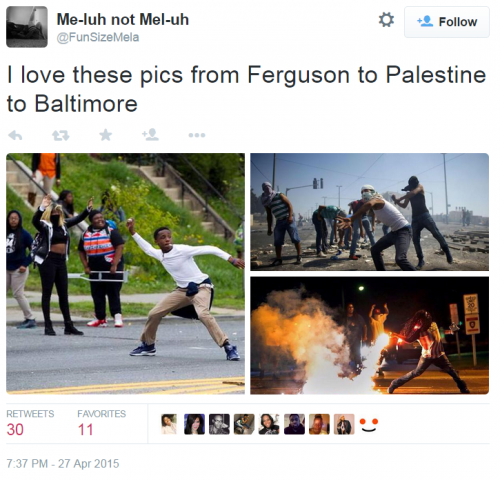 Seriously, is there any domestic problem anti-Israel activists will not hijack?

I see Bassem the Egyptian has been at work in Baltimore. Pretty good op for Hamas and ISIS.
Baltimore is not oppressed. Palestine is not oppressed because it does not exist. Muslim Arab leaders have repeated the lie of Palestine so long that Muslim Arabs in Gaza believe they are Palestinian.

Max “Hyena Bitch” Blumenthal really would be better off in some other nation.

What do they call it, when an outsider tries to make use of another people’s reality?

I had never heard of this tactic being used in Ferguson, so it wasn’t apparently effective. But, Ferguson could have been a practice run, and they might get better at it as time and use go on.

Zimmerman’s trial was a practice run for the modern liberal-progressive black greivance industry, and that was quite successful in making Zimmerman’s life miserable and getting the state to give in to the mob by holding a trial based on no credible evidence. THE MLPBGI is bound to stumble on one case where a person is treated wrongly by a cop or legally armed citizen. When they do, they are going to do their damnedest to turn it into a holy crisis and capitalize on it to the utmost. And, it needs to happen before Soetoro leaves office.

Are they still trying to work the “apartheid” angle? I wonder when they will choose a charismatic leader from Hamas to defeat the dominant Fatah group. Followed by a foreign usurpation — an outright assault will result in a global massacre — of the Israeli government. Well, not while Netanyahu has anything to say about it.

Israel built a wall around Gaza. There’s no wall around Baltimore. Yet. Maybe it’s not a bad idea.

The residents of GAZA wanted the wall to keep the Jews out. Israel reinforced it when the terrorists killed innocents.

You know, I’ve had a conversation with 3 different individuals about exactly what should be done by the government in Baltimore, It is quite simple. Let me detail it:

The Mayor should go out in public, and give a press conference and state the following:

1.) We encourage peaceful protesting. If you wish to demonstrate by marching, holding rallies or speeches in public forums, please feel free to do so.

2.) We ask that you not obstruct traffic or otherwise impede people’s travel. If you do so, you will first be politely reminded of your civic responsibilities to your fellow neighbor. Please don’t harass or severely inconvenience your neighbors. If you don’t mind your manners, you will be arrested for disorderly conduct.

3.) RIOTERS AND LOOTERS WILL BE SHOT ON SIGHT. I have already notified the police and special weapons squads. If you are seen Rioting and/or Looting, you will be shot as a terrorist engaged in armed insurrection against the peace and dignity of the United States of America. Period. Don’t riot, don’t loot.

Thank you. Have a nice day.

That should put everybody perfectly well on notice of exactly what their responsibilities and rights are.

My guess is that after the first three or four rioters are shot in the face, the remainder will get the message quite quickly that rioting/looting = death.

Where I live, just South of Atlanta, businesses have been screaming for the metro line, subway,to come to my town. But for some reason none of the residents want it. After looking at Baltimore City I know why.

Look at the crime map from before a MARTA extension and after. Crime in Atlanta, follows the rails and buses.

Blumenthal is one of the sleaziest, most dishonest and disgusting excuses for a human being alive today, and that’s a broad category.

Why not just blame Putin because some cops know Judo? That would make everyone happy…

My, that’s the height of laziness…when individuals can’t even start their own protest and “hijack” someone else’s..

The left’s “blame the Jews” bullcrap is very worn out. The problem is black “culture.”
Every time they have a grievance, legitimate or not, they riot, loot, and burn businesses.
Rioters, looters, and arsonists should be shot on sight, thrown into garbage trucks, and taken to the landfill where trash belongs.