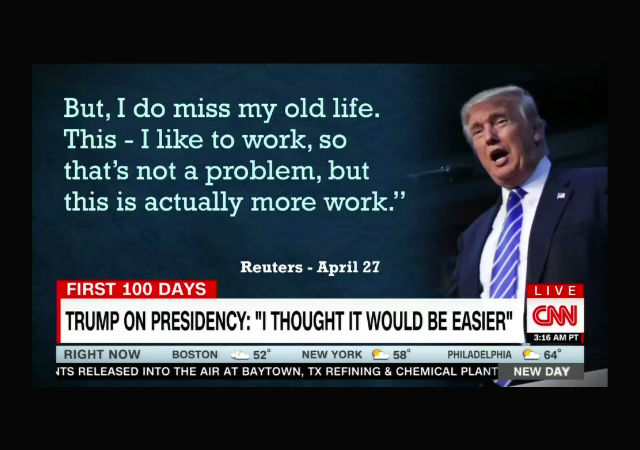 Posted by Mark Finkelstein on April 28, 2017 26 Comments
Whichever poison you picked this morning—CNN or MSNBC—you would have been treated to snide shots at President Trump. On CNN, responding to President Trump's statement that the presidency has turned out to be more work than expected, David Gregory sneered "thanks, Captain Obvious." Meanwhile, over on MSNBC's Morning Joe, trying to explain President Trump's more measured tone of late, Donny Deutsch wondered if maybe "the meds have changed." When Willie Geist intervened to say that there are no meds involved, Deutsch concurred, saying he was just kibitzing: "we kibitz on Morning Joe." However Donny might want to laugh it off, the fact that he and Gregory were willing to openly say what they did reflects the contempt in which the MSM holds President Trump. Can you imagine members of the liberal media saying something so snide about President Obama?
Read More 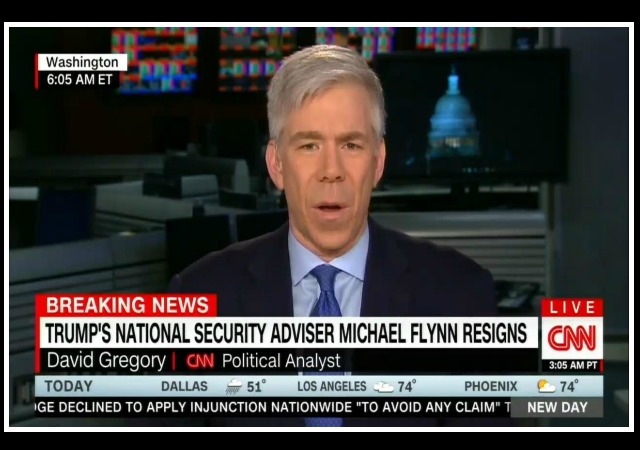 Posted by Mark Finkelstein on February 14, 2017 22 Comments
Discussing the overnight resignation of National Security Advisor Michael Flynn, CNN's David Gregory managed this morning to work in a broad swipe at the president. Gregory claimed that "the fledgling foreign policy in the Trump administration [has] been a disaster." Really? Gregory ignored: the widely-praised, weekend-long meetings that Trump just concluded with Japanese PM Abe; Trump's positive conversation with Chinese Premier Xi and the confirmation of the One China policy; the re-establishment of the special relationship with the UK and its PM May, and of course the healing of ties with Israel after years of Obama animosity culminating in his perpetration of an anti-Israel Security Council resolution.
Read More 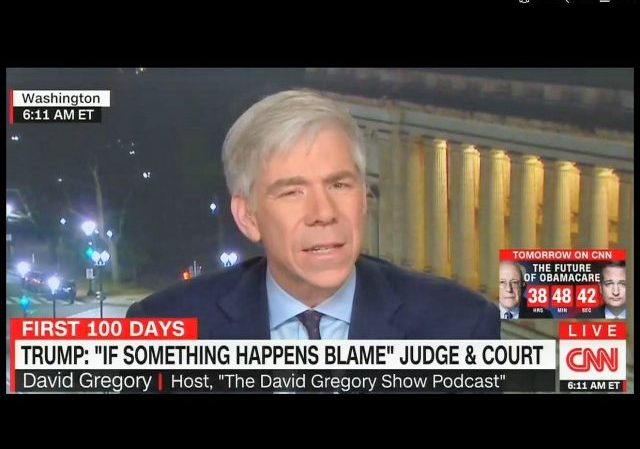 David Gregory: Trump Like ‘Old Man Yelling Get off His Lawn’

Posted by Mark Finkelstein on February 06, 2017 45 Comments
On CNN this morning, David Gregory, speaking of President Trump's tweeting—and specifically, those from this weekend criticizing the judge who blocked his executive order on immigration—said: "he sounds like an old man sitting on his porch yelling at somebody to get off his lawn." Added Gregory: "you've had in the first 18 days, successive weekends where he has completely derailed what his administration is trying to do with a kind of personal indulgence by attacking people personally, launching an attack on the separation of powers. But what it really comes down to is this obsession with himself, and I think that's going to start to wear thin."
Read More

Posted by William A. Jacobson on January 22, 2015 30 Comments
This is likely the final chapter in the saga of our two-year long fight to obtain important documents regarding the non-prosecution of David Gregory for possessing on Meet the Press an illegal high-capacity ammunition magazine. The short version is that the D.C. Metropolitan Police Department warned NBC News that it could not possess an actual high-capacity magazine, but NBC News went ahead and did it anyway. The MPD recommended a warrant for Gregory's arrest, but that request was nixed by the D.C. Attorney General Irvin Nathan because -- my paraphrase -- Gregory was just too nice a guy and had no other criminal intent. That attitude stood in stark contrast to the D.C. Attorney General's vigorous prosecution of other lesser-known people who also were nice people and had no other criminal intent, but violated D.C.'s gun laws. We served a Freedom of Information Act request but D.C. held back numerous documents. So we filed suit. We were assisted by attorneys Jim Peterson and Ramona Cotca of Judicial Watch, who did a great job. Everybody give them a round of applause.

Happy to have helped you with this @LegInsurrection! Finally Obtained: @davidgregory Arrest Warrant Affidavit http://t.co/gLUdE6lyqd #2A #DC

D.C. eventually produced more documents, but refused to give us the Arrest Warrant Affidavit. We eventually won a court decision, and today D.C. produced the Affidavit, with some personal information redacted. (Affidavit Below) The Affidavit demonstrates the facts as to NBC News' open defiance of the law. This was no innocent error. Yet no prosecution. Here is an excerpt from the Affidavit:
Read More 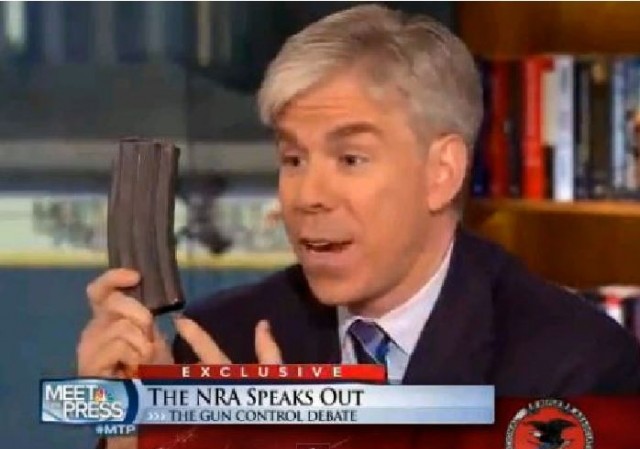 Posted by William A. Jacobson on December 09, 2014 20 Comments
For those of you who are new to the blog, or who have not been paying attention, Legal Insurrection filed a FOIA suit against the District of Columbia seeking records related to the non-prosecution of David Gregory and NBC News despite their clear violation of D.C.'s gun law by possessing a 30-round ammunition magazine. We are represented by Judicial Watch, which has done a wonderful job. It's a real credit to them that they work hard to dig out the truth not only on big issues like IRS targeting, but also smaller issues like how draconian D.C. gun laws are not enforced against the famous and connected D.C. elites. In the Gregory case, NBC News was warned by the D.C. Metropolitan Police Department that possession of the magazine was illegal, and that NBC News should use a photo not the real thing, but NBC News ignored the warning and used it on Meet the Press. 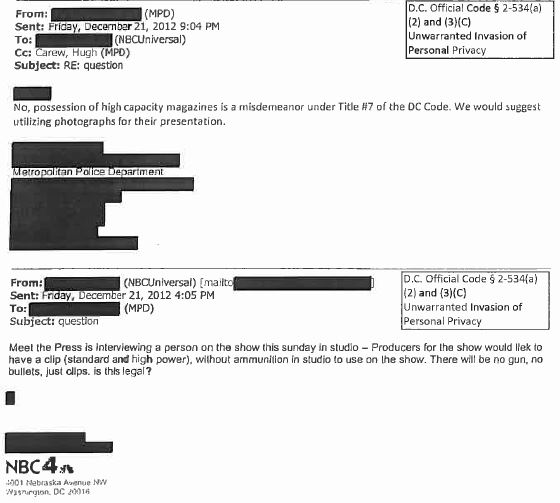 Legal Insurrection was one of the first to note the violation of law, and we pursued the story in a long series of posts. Despite the clear violation of law, the D.C. Attorney General, Irvin Nathan, decided not to prosecute Gregory or any NBC News personnel.
Read More

Inside the Beltway baseball... 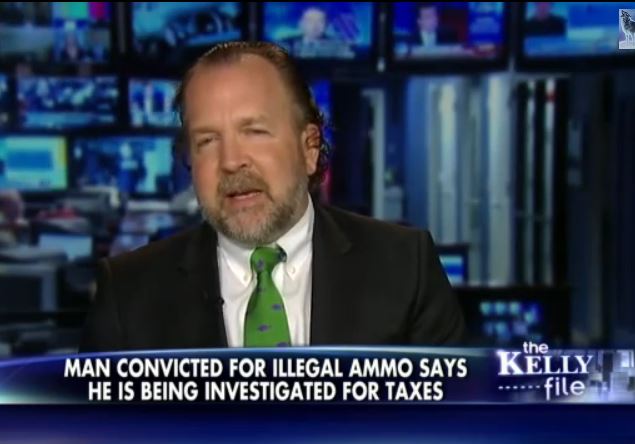 Posted by William A. Jacobson on April 28, 2014 14 Comments
We have written about Mark Witaschek many times before. Witashek was aggressively prosecuted the same D.C. Office of Attorney General that refused to prosecute David Gregory for a clear gun law violation, all because Witaschek was found in possession of "muzzle loader" bullets, Someone who’s not David Gregory convicted of stupid DC gun law violation:

Yesterday, a D.C. Judge found Mark Witaschek guilty of “attempted possession of unlawful ammunition” for possessing an antique replica muzzleloader bullet. Emily Miller at the Washington Times has thoroughly chronicled Mr. Witaschek’s court proceedings, which to date have spanned nearly two years and now appear likely to continue into the appellate stage. In brief, the case centered on a single inert piece of ammunition, which rested on Mr. Witascheck’s desk in the District, and which he did not know was illegal.

William F. Vanderpool, a retired supervisory special agent for the Federal Bureau of Investigation, [explained] to the judge that the saboted lead balls have no powder or propellant attached, so are not “live…” The primer on the shotgun shell had already been struck by the firing pin. Mr. Witaschek kept the misfired shell on his home office desk as a memento from a hunt.

Ultimately, Mr. Witaschek was sentenced to time served, a $50 fine, and is required to enroll with the Metropolitan Police Department’s firearm offenders’ registry within 48 hours.

That wasn't the end of the story. As Emily Miller further writes, the D.C. Office of Tax and Reveue now is investigating Witashek's employment payroll records:
Read More 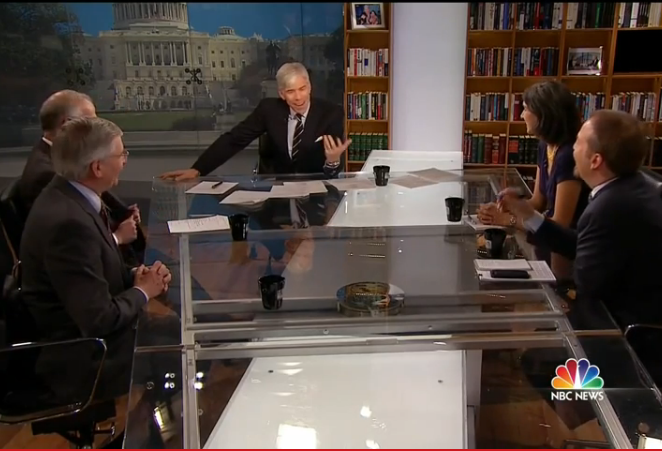 No one jumped to Obama's defense when the charge was made...

For those of you who are new to the blog, or who have not been paying attention, Legal Insurrection has filed a FOIA suit against the Distric of Columbia seeking records related to the non-prosecution of David Gregory and NBC News despite their clear violation...

To catch a predator takes a village....

A testament to the double standard for justice in the District of Columbia, one for the rich and powerful, another for the rest of us.... 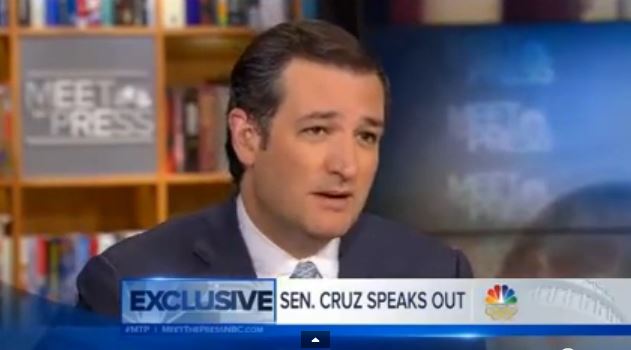 Ted Cruz swats away David Gregory's presumptions and accusations on Meet the Press...

Glenn Greenwald appeared on Meet The Press this morning. The interview is garnering headlines, mostly for David Gregory's suggestion that Greenwald is not a real journalist and question as to why Greenwald should not be prosecuted. Not being prosecuted, of course, is something David Gregory knows a...

"The intense focus you brought saved Nathan from years in jail."...

Emily Miller: “D.C. mayor was in on David Gregory coverup”

By way of brief background, Emily Miller has been trying to obtain documents from various branches of government in the District of Columbia regarding the investigation of and decision not to prosecute David Gregory for a clear violation of the D.C. handgun laws. Legal Insurrection also...

I wrote on Monday about the lawsuit filed by Judicial Watch on behalf of Legal Insurrection seeking documents withheld by the District of Columbia Office of Attorney General (OAG) and Metropolitan Police Department (MPD) regarding David Gregory's clear violation of the D.C. gun laws, Legal Insurrection...