Judicial Watch, a leading government open records organization, announced today that it has filed suit on behalf of Legal Insurrection to obtain documents regarding David Gregory's violation of the District of Columbia gun laws and the investigation which led to the decision of the District of...

Is there a “David Gregory Clause” in the New York Gun Law?

We have a Gun Class Project ongoing to try to unravel the 39-page gun law passed and signed into law this week.  It is a very complicated Bill, to put it mildly. One thing I just noticed. There is a provision in the law which sounds a lot...

Late last Friday afternoon, D.C. Attorney General Irvin Nathan released a letter determining not to prosecute David Gregory “despite the clarity of the violation of this important law.” After the letter was released, Legal Insurrection discovered that Attorney General Nathan had participated in a mock trial event at the Shakespeare Theatre...

Former federal prosecutor questions why D.C. Atty Gen did not recuse himself from Gregory case

... but says A.G. reached the right decision not to prosecute anyway...

District of Columbia Attorney General Irvin Nathan issued a lengthy letter today explaining the decision not to prosecute David Gregory “despite the clarity of the violation of this important law," despite rejecting NBC's claims of a subjective misunderstanding of the law, and despite vowing vigorous...

David Gregory will not be prosecuted

Gregory goes free "despite the clarity of the violation of this important law"...

I have been known to prepare all-purpose, pre-written, generic MSM-style announcements on the cusp of an important decision. So here's what I have pre-drafted for the David Gregory decision which will be released later this afternoon: In a decision sure to have profound implications for the national...

The David Gregory investigation has been completed by police, and has been handed over to prosecutors, via WaPo: The decision on whether anyone should be prosecuted after “Meet the Press” host David Gregory appeared to hold a high-capacity ammunition magazine on national television now belongs to...

Emily Miller points out how David Gregory is receiving special treatment at the hands of the D.C. police, Two systems of justice: It’s been more than a week since police in Washington, D.C., opened an  investigation into NBC’s David  Gregory’s possession of a “high-capacity magazine” that’s...

David Gregory has a high capacity ammunition magazine problem, as you are aware. So I was waiting for the issue of banning high capacity magazines to come up during the Meet the Press interview this morning, and it did (emphasis mine): GREGORY: "Those are four huge things...

David Gregory is returning from vacation for an exclusive interview with Obama on Sunday. I can't wait for the topic of strict enforcement of gun laws to come up. Excited to announce that President @barackobama will be my exclusive guest this Sunday on @meetthepress nbcnews.to/W9Ykim #MTP— David...

Much has been made of David Gregory’s alleged possession of a large capacity ammunition feeding device during an airing of Meet the Press on December 23. In my mind there are two big questions to answer: 1) can the government prosecute Mr. Gregory; and 2) if...

That's where we are at the end of the day, today, via Jonathan Adler at National Review: It appears as if NBC’s David Gregory decided to brandish a high capacity magazine on NBC’s “Meet the Press” even though NBC was informed it would be illegal to...

As we move into 2013 and the legal insurrections, we should learn from history. As Thomas Lifson at American Thinker points out, now that the major institutions have been surrendered, it's time to emulate the left, Here comes the Alinskyite Right: David Gregory and Piers Morgan have...

It must be nice to have friends in high places...

Posted by William A. Jacobson on December 26, 2012 56 Comments
Now that the D.C. Metropolitan Police Department is on record that it told NBC News not to use the high capacity magazine in its segment with Wayne LaPierre, the big media is paying attention and taking this seriously. TMZ is running interference claiming that NBC News was told by ATF that the D.C. Police said it was okay, but the D.C. Police say they were asked directly by NBC News for permission and that permission was denied. The NY Times actually has a sensible and informative story on it:

In Washington, people who are caught in possession of the type of magazine that Mr. Gregory had can face up to a year in prison, said David Benowitz, a criminal defense lawyer.

Prosecutors and defense lawyers often work out a plea agreement in which defendants receive probation and have a misdemeanor charge on their criminal record, Mr. Benowitz said. If defendants have a prior criminal record or lose a jury trial, they could face a stiffer sentence.

Mr. Benowitz said the accusation from the police that NBC had asked for permission and then went ahead with showing the magazine “didn’t help Gregory’s case.”

Yeah, asking for permission is pretty damning when you ignore what you are told directly from the law enforcement authority and do it anyway.

Unfortunately, the otherwise great Greta has missed the point on this, Investigating NBC’s David Gregory? Really? Can we be any sillier?

We have so many serious issues of violence in this country — and even here in DC on our dangerous streets — that it is bizarre to me that anyone would spend (waste) 5 minutes investigating NBC’s David Gregory for this.

One of the problems with the ever expanding gun laws advocated by Gregory and others is that otherwise law-abiding citizens get caught up inadvertently violating the law,  like this soldier on leave from Afghanistan, while criminals do what they please and powerful people don't get prosecuted.  The guns laws, as presently constituted and as proposed, turn us into a nation of men not of laws. What Greta doesn't understand is that David Gregory isn't being investigated because he's David Gregory; if he were anyone else, he'd already be in jail. 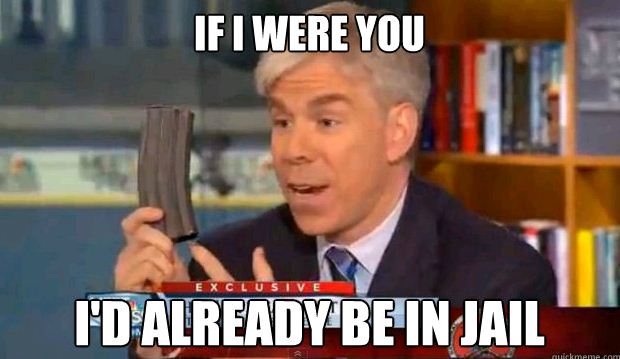 (Created by Legal Insurrection via Quickmeme)

D.C. Police — NBC requested and was denied permission to use high capacity magazine in news segment

As noted in an earlier post, an email has surfaced purporting to be from the D.C. Metropolitan Police Department stating that NBC requested permission to use a high capacity ammunication magazine and that the request was denied. The email first appeared on the AR15 gun forum, and...