Inside the Beltway baseball

[Note: It doesn’t really matter who is at the helm of Meet The Press. David Gregory, Chuck Todd, who really cares? I’m just writing about it because it gives me an excuse to run the featured image and to remind people that I still am litigating to get all the documents related to Gregory’s non-prosecution for a clear D.C. gun law violation, represented by Judicial Watch.]

SIREN: Chuck Todd, a political obsessive and rabid sports fan, is the likely successor to David Gregory as moderator of “Meet the Press,” with the change expected to be announced in coming weeks, according to top political sources. The move is an effort by NBC News President Deborah Turness to restore passion and insider cred to a network treasure that has been adrift since the death in 2008 of the irreplaceable Tim Russert. Although Todd is not a classic television performer guaranteed to wow focus groups, his NBC bosses have been impressed by his love of the game, which brings with it authenticity, sources, and a loyal following among newsmakers and political junkies. 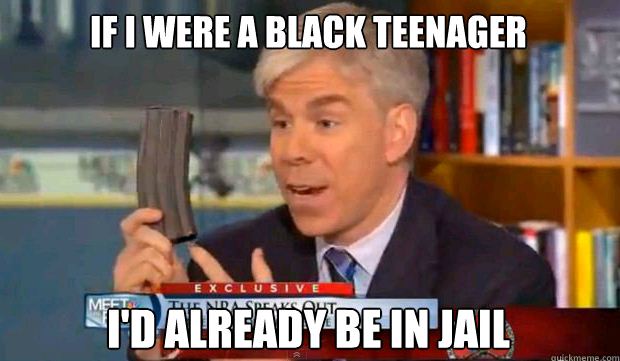 F. Chuck Todd will at least have Rush Limbaugh pulling for him.

H.H….Indeed, El Rushbo will dance on F.Chuck with such mirth!!

Might as well be Chrissy Matthews. Total tank-diver for Pres. ScamWOW and the Collective.

When they lost Tim Russert, the executives figured that “Meet the Press” was such an American Institution they could get away with replacing him with a partisan hack, instead of replacing Russert with another “Russert”.

So what do they do? Instead of trying to find that “Russert” they passed on in the first place, they are replacing Gregory with another “Gregory”.

It’s kinda like saying “Obama was a failed experiment. We need Hillary.”

As for Gregory….well, that didn’t last very long.

NBC is making the same mistake as libtard radio, MSNBC, etc., make. They think a center-right country wants to watch or listen to libtard spin and ideology…..or they’re going to indoctrinate us to agree with it. After all, it works in ALL the school systems, doesn’t it?

No, what they keep forgetting to do is look at FNC’s vast success in presenting, fairly, both sides of an issue as opposed to trying to bludgeon the public with the poisoned group think of an MSNBC or CNN.

Viewers of Meet the Depressed were used to six decades of pretty knowledgeable, mostly fair most of the time anchors who were REAL journalists. Then David Gregory? After Russert died, and Gregory was announced as the new anchor, I momentarily thought it was a joke.

The appointment of Gregory was absolutely one of the starkest examples the low the level journalism has sunk to since the libtards checkmated the education industry.

Prof!!
Nicely played.I had forgotten about his violation of gun laws. and all media ignoring that he did that.
That is why we have YOU.

What… whut? They want to liven up ‘Meet the Press’ by pulling in someone from the grave yard of left wing propaganda that is MSNBC?

Amen, Dr.J. Both, and sooooooo many more, are feckless, useless vastly overpaid Pinheads.

So comes the beginning death rattle of yet another iconic American TV show, this one being the longest running in TV history.

Chuck Todd’s goatee said to be hiding the key to MTP’s success all along.

Todd’s more of a buffoon than Gregory, just less nails-on-the-chalkboard annoying. NBC & MTP remain clueless. Perhaps they don’t really care. The choice of Todd could be considered evidence that is so.

Todd is a charter member of the Obama Boot-licking Obsequious Sycophant Society, but it being NBC, there aren’t any real journalists in the stable anymore. Fox lured Maria away, she was the last.

Gregory isn’t on the block for being a leftist propagandist, it’s because his ratings are worse than Obama’s. Todd isn’t going to improve them in any lasting way.

We are witnessing with Obama the long slow suicide of the mainstream press.

And it couldn’t happen to a more deserving bunch.

You know Gregory was in Atlanta interviewing for some gig on CNN. You know what FUMU means, don’t you?

NBC is simply unable to square obamullah bootlicking with lousy viewership. They cannot fathom the link, connect the dots. It’s too far removed, too abstract a reality for them to ever make the cause and effect connection.

can anyone say; dumb and dumber?

The budget at NBC and MSNBC for kneepads must be enormous. I wish I had that contract.

These guys are on their knees so much, their knees MUST be calloused, and I doubt they are in need of knee pads any longer.

Heh. Not even on my radar. I deleted ABCBSNBCNN from my remote more than 10 years ago.

…there’d be a rifle attached to the other end of this magazine.”