Some criminals are more equal than others.

Dinesh D’Souza allegedly violated campaign finance laws through a relatively small scheme to have friends donate $20,000 to Republican Senate candidate Wendy Long, who had little chance of defeating Kirsten Gillibrand in 2012. The alleged illegality was that D’Souza would reimburse them, thereby allowing him to exceed the individual campaing donation limits.

It he did it, it’s hard to excuse. He must have known about the campaign limits.

But such small-scale violations of campaign finance law often are treated as civil matters, with fines. When the Obama campaign turned off credit card security features that would prevent foreign donations, it didn’t even get a slap on the wrist.

When the Obama campaign was caught hiding over $1 million in excess donations, it merely was fined:

An FEC audit of Obama for America’s 2008 records found the committee failed to disclose millions of dollars in contributions and dragged its feet in refunding millions more in excess contributions.

The resulting fine, one of the largest ever handed down by the FEC, is the result of a failure to disclose or improperly disclosing thousands of contributions to Obama for America during the then-senator’s 2008 presidential run, documents show.

The FEC says the Obama campaign failed to disclose the sources of 1,300 large donations, which together accounted for nearly $1.9 million. Election Commission rules state campaigns must report donations of $1,000 or more within 20 days of Election Day.

Not here. Prosecutors took D’Souza’s case to a grand jury, which issued a felony indictment. D’Souza’s bail was set at $500,000 (that’s not a typo).

It’s hard to see how the criminal prosecution is not political, a result of D’Souza’s 2016: Obama’s America film. That prosecutors have the power to indict doesn’t remove the smell of politics from the case, because in simlar situations the matter is treated civilly.

This is an issue we have addressed before. What Prof. Glenn Reynolds calls Ham Sandwich Nation, where everyone has broken some law, and prosecutors get to choose who to indict. 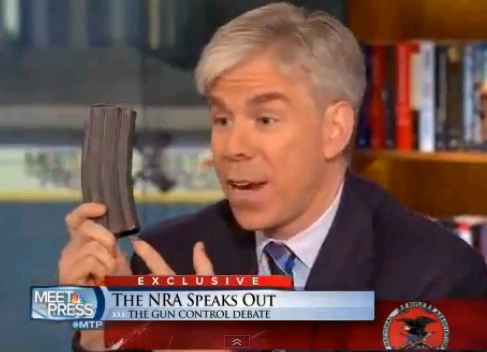 What if Dinesh D’Souza had appeared on Meet the Press and waved around an illegal 30-round magazine to prove a point? Would he have been let off the hook like David Gregory?

Here’s the trailer for D’Souza’s latest film, due out on July 4, America:

We all know the answer to your question, and I encourage you the press on it.

This morning, I heard Cokie Roberts commenting about Mike Huckabee’s criticism of the Democratic party for its paternalistic and insulting treatment of women’s issued. All Cokie had to say was that Mike Huckabee had said “libido” and that they just can’t have such comments.

I saw MiKe Huckabee’s comments (in full, later). I saw him on TV explaining, and I am aware of advice from Charles Krauthammer and one other Republican talking head (Dick Morris?) to the effect that a Republican man cannot use the word “libido.”

This is your friendly, neighborhood Liberal throwing a big, fat BS flag.

The criticism should be for the lying media (Cokie? Hear me?) that trims a person’s comments to a single word, and then deceptively disseminates it in a false light.

It is absolutely intolerable for the media to do this. And this broadcast was this morning, after all the brouhaha over the tweets — So Cokie had to know she was presenting his comments in a false light.

Cokie Roberts owes Mike Huckabee an apology, and more important, she owes one to her listeners for failing to transmit a cogent and truthful criticism of current government policy.

I think this incident could be electoral gold.

Don’t hold your breath Valerie. The MSM lives to take GOP commentors out of context to prove their ‘War on Women’ Meme.

“As we have long said, this Office and the FBI take a zero tolerance approach to corruption of the electoral process,” the U.S. Attorney for Manhattan, Preet Bharara, said in a statement released by the Federal Bureau of Investigation. Bharara is an Obama appointee.
————————————

Yah, see THAT is a lie. Consider; Manhattan takes a “zero tolerance approach to corruption…”!?!?!

Zero tolerance so long as it isn’t a Democrat who’s allegedly at fault. Then it’s ok.

I know the SDNY US Attorney’s office. I think they have a long history of being apolitical. I think that probably is the case here. In other words, I hightly doubt they are targeting defendants based on a DEM/OBama enemies list.

But, there is another very troubling angle. The US Attorney Preet Bharara, a former aid to Chuck Schumer, has been recently accused of unfairly targeting Indians. From wiki about his insane prosecution of an Indian diplomat: “Mr. Bharara and his office were accused of racial discrimination by media. He has been accused of targeting people of Indian origin.”

I hope it is not true, but the perception exists and will be reenforced by this recent set trumped up charged direct to someone of Indian heritage.

One had to wonder if Preet, an Indian, is trying to distance himself from his own cultural past? Another bad whiff: Preet is Sikh adn Hundu. D’Souza is Christian. Nah. Nothing there.

A former aid to Chuck-U Schumer is NOT playing politics?

Ñice squirrel you got there.

To those of you who rated George’s comment with a ‘thumbs down’, did you even read past the first paragraph?

George, I see your point. The problem is “Prosecutorial Discretion” often conflicts with the ethical obligation of the Justice Department lawyers: To see that justice is applied fairly and impartially.

Another example of how this is likely all revenge politics is the difference between how John Edwards’ donor was treated under very similar alleged accusations (from the WaPo – see the last paragraph). Townhall took note of the hypocrisy, as well.

Also, the producer of D’Souza’s upcoming film is being quoted today as saying he’s, “…..never been afraid of his government until now.”

Yeah, it’s pretty obviously political. But what else can you expect from Obama, the Imperial President’s America?

Dinesh D’Souza, as filmmaker and writer alone, has created and sustained more jobs and provided more taxable revenue than Obama could ever lie about in his SOTU Grammy leftovers served tomorrow night. Put your PJs on and go to bed during his no-brainer screed against those who create wealth as opposed to those who consume wealth.

The Obama donor/IRS investigator rapidly found no criminal wrong doing. The IRS changes regs to facilitate harassment of conservatives. Dinesh indicted. Federal case being made over closure of on/off ramps in Ft. Lee. Chuck Schumer wants to change the way elections are held to overcome the advantage the “Tea Party Machine” has.

The Leftists are becoming more brazen. Soon they will come after talk radio and uppity conservative bloggers.

Meanwhile Hillary can collect $200,000 per speech, and Solyndra style paybacks to Obama bundlers continues apace, with Obama’s friends walking with tens of millions each, almost directly from the taxpayer.

And it seems half of the Obama administration has lied to congress, but they only pursued Roger Clemens. And the IRS continues to assault the tea party, with Lois Lerner comfortably retired.

It’s not about right or wrong. It’s about criminalizing dissent.

or make so many laws that everyone is a criminal … then selectively enforce the law against dissenters.

afaik, D’Souza plead innocent … I assume he is well represented. Boeing, Gibson Guitar, and the recent fishing expedition in WI are better examples of the innocent being punished by process.

He’ll still be out his time and legal costs even if he’s acquitted or the charges dropped, which I presume is the point of the prosecution.

It has happened for years – the Leftist criminalization of those in opposition, but since Obama has become president it become a matter of routine. This will not be tolerated. I hope the Regime has war gamed the well the coming civil war they have started. SIC SEMPER TYRANNIS – There Will Be Blood.

What would it take to bring angry Conservatives out into the streets? I can only think of two scenarios:

Short of that, Americans will just change the channel.

I share your pessimism on Conservatives’ relative passivity. I.e., I fear that it would take an act of massive, naked lawlessness on Obama’s part to knock us off our butts and into the streets.

On the other hand, I think Conservatives ARE capable of passive resistance, and that such resistance CAN sometimes be effective.

For example, it’s been fun watching the vast majority of Connecticut gun owners IGNORE their state’s new law requiring them to register certain firearms and magazines. I think a similar thing is happening in New York. It’s also been fun watching millions of Americans NOT sign up for Obamacare, in disregard of the individual mandate.

Finally, given that the IRS is now just an arm of Organizing for America and COMPLETELY illegitimate, I wouldn’t be surprised if millions more Americans this year simply neglect to file a federal tax return.

Jugears could make serious plus points merely by pardoning Dinesh (a la Ford and Nixon). What’s the downside for him?

There is no downside unless he’s a true emperor. Which is why he won’t do it (unless he reads LI).

D’Souza chose to make his living by poking Obama in the eye with a sharp stick, so who didn’t see something like this coming? What’s most curious to me is not that D’Souza is a victim of selective prosecution by the Chicago Way, but that D’Souza would paint the target on his forehead all by himself. Seems a pretty naive action by somebody so well versed in how the Borg conducts it’s business. He made it too easy.

I would call it courageous.

Obama, Schumer, Cuomo !
The goal is neutralize the right by the power of the pen.
Enact the regulations, flaunt the law, move the goal posts, criminalize the offender.

Great trailer, I can’t wait for this movie.

From American Thinker: Has Marxist/Leninist pal of Bill Ayers Mike Klonsky just given us the reason for the arrest of conservative writer Dinesh D’Souza?

[…] William Jacobson has pointed out something that’s been bothering me ever since I heard Obama’s Department of Justice is prosecuting Dinesh D’Souza over an illegal campaign contribution. […]

“Did you really think we want those laws observed?” said Dr. Ferris. “We want them to be broken. You’d better get it straight that it’s not a bunch of boy scouts you’re up against… We’re after power and we mean it… There’s no way to rule innocent men. The only power any government has is the power to crack down on criminals. Well, when there aren’t enough criminals one makes them. One declares so many things to be a crime that it becomes impossible for men to live without breaking laws. Who wants a nation of law-abiding citizens? What’s there in that for anyone? But just pass the kind of laws that can neither be observed nor enforced or objectively interpreted – and you create a nation of law-breakers – and then you cash in on guilt. Now that’s the system, Mr. Reardon, that’s the game, and once you understand it, you’ll be much easier to deal with.”

What is the prosecutor’s name? He’s immune from a lawsuit, but he’s not immune prom being reported to his local bar association for politicizing the laws.

The left wins too often because they have the courage to act.

Get his name, watch him, report him every time he misbehaves, copy his superiors, copy the politicos he supports, copy their political enemies, do something other that posting crabby blog comments.

Great point on the discrepancy between the Obama campaign’s offenses & punishment vs D’Souza’s alleged offense.

Parallels between this incident and the Soviet Penal Code’s Article 58 enforcement: http://impliedinference.wordpress.com/2014/01/24/the-arrest-of-dinesh-dsouza-the-changing-nature-of-rule-of-law-in-america/