This is likely the final chapter in the saga of our two-year long fight to obtain important documents regarding the non-prosecution of David Gregory for possessing on Meet the Press an illegal high-capacity ammunition magazine.

The short version is that the D.C. Metropolitan Police Department warned NBC News that it could not possess an actual high-capacity magazine, but NBC News went ahead and did it anyway. The MPD recommended a warrant for Gregory’s arrest, but that request was nixed by the D.C. Attorney General Irvin Nathan because — my paraphrase — Gregory was just too nice a guy and had no other criminal intent.

That attitude stood in stark contrast to the D.C. Attorney General’s vigorous prosecution of other lesser-known people who also were nice people and had no other criminal intent, but violated D.C.’s gun laws.

We served a Freedom of Information Act request but D.C. held back numerous documents. So we filed suit.

We were assisted by attorneys Jim Peterson and Ramona Cotca of Judicial Watch, who did a great job. Everybody give them a round of applause.

Happy to have helped you with this @LegInsurrection! Finally Obtained: @davidgregory Arrest Warrant Affidavit http://t.co/gLUdE6lyqd #2A #DC

D.C. eventually produced more documents, but refused to give us the Arrest Warrant Affidavit. We eventually won a court decision, and today D.C. produced the Affidavit, with some personal information redacted. (Affidavit Below)

The Affidavit demonstrates the facts as to NBC News’ open defiance of the law. This was no innocent error. Yet no prosecution.

Here is an excerpt from the Affidavit:

The point of all this was not that we wanted David Gregory prosecuted. We didn’t.

There is no reason for mere possession of an unloaded high-capacity magazine, not to be used in the commission of some other crime and far away from actual ammunition, to be a crime. But it is in D.C.

That needs to change, but it probably will not, until people like David Gregory and other high profile citizens start having it enforced as to them. 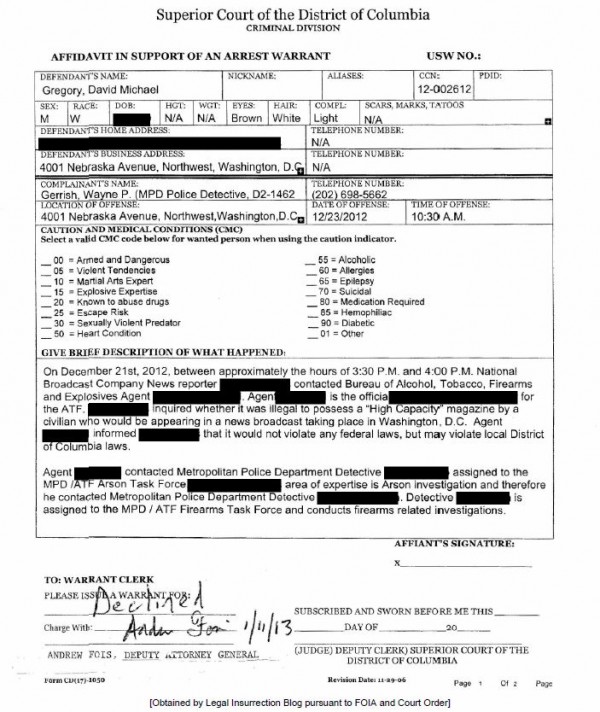 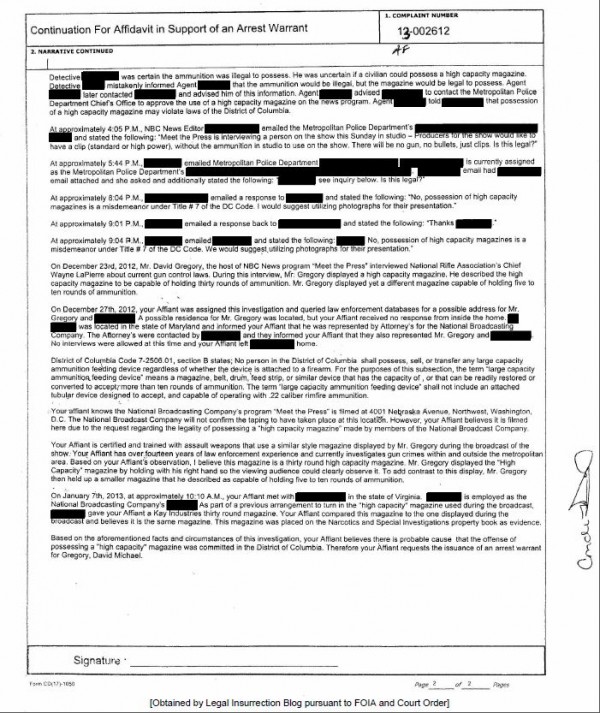 Hey @chucktodd @NBCNews can I appear on @meetthepress to talk about this? http://t.co/zeoAyP4uGZ Pls RT pic.twitter.com/uabINv7ScD

What makes me mad is that DG could have easily made his pic with a ferocious looking picture of a big mean gun and banana clip but he didn’t.

He and his show producers chose instead to publicly break the law with proof of willful disobedience in the face of a warning. Despite this, he did it anyway just to be arrogant and prove that he could get away with it.

Could have filmed the exact same show they did, just have to move the filming to a locale where the magazine is legal.

Maybe he did it just to point out that it’s a truly stupid law.

Oh, I’d look for phone records between Gregory’s producers and the DA’s office. The DC PD said no on the illegal mag, but I’ll bet they called and asked the DA, who gave them an unrecorded ‘wink, wink’ go ahead.

Hell, Henry… NBC probably has a field office within the DC DA’s Office.

Gregory’s wife and the DA are buds.

I doubt those exist. It is much more likely if there were phone calls or e-mails they would have been between the mayor’s, DA, and Police.

They did not want to prosecute NBC, and if anything were probably quite ticked with NBC after they had been warned. NBC also wasn’t picking on some small political group, they were trying to twist the nose of the NRA.

No doubt from DC’s point of view, they had to figure a way out the mess that NBC had put them into. Consider that several of DC weird and draconian gun laws were floating around federal court and there has always been the possibility that Republican House might have weighed in too. I bet you they probably towed Gregory’s car more than once after this.

Whatever calls DC and NBC made it was to fill in enough details so that DC wasn’t forced to arrest Gregory. It might be much more interesting to see if you can get the detectives to open up about the case and why the warrant was squashed.

Congratulations, Professor, and Judicial Watch for following through.

Unfortunately, FOIA and open meetings laws, etc., are routinely flouted by government at all levels all across the country every day, with impunity. Until there is some measurable pain or punishment attached to violating these mostly weak laws, that will continue.

That DC felt they could fight this high-profile case to the end illustrates the contempt with which government agencies treat the law and the citizenry. What chance does a citizen without legal help stand of getting the information he is guaranteed by law?

Gregory was supporting the political position of the DC government. Politics supersedes the law. The “rule of law” now means “who rules, makes up the laws.” The legal framework that stabilizes a society has been thrown out particularly equality before the law. DC must be taking lessons from Zimbabwe at best or Bolshevik Russia. A political party ceases to exist when it declares itself above the law. That was the ruling against the Communist Party after the fall of the USSR.

To clarify, “who rules”, does not mean “who is elected into office”, but “whoever controls the MSM, academia, the professional organizations, and all of the people those in power fear”.

I live in a country where we have the equivalent of Adams’ infamous Sedition Act. Is it used against people who anger the government? No, it is used to threaten people who attack the Left.

As I always say, if the government controlled the press, at least we would get a different opinion every few years.

Maybe they could horse whip him.

I’d be OK with that.

How will they prosecute “lesser” people under this law without having equal protection issues raised?

Equal protection issues do not fly in court unless the complainant is a member of a protected group.

David Gregory did get fired though. Spectacularly. Karma.

I think that had more to do with ratings not violating the law.

“Gregory was just too nice a guy and had no other criminal intent.”

Eliminate “just too nice a guy” because that is not a legal argument and you’re left with “no other criminal intent.” This is the only legal argument to support the failure to prosecute Gregory, and it is equally applicable to anyone else who disobeys the law but has “no other criminal intent.” It also underscores the problem with all malum prohibitum laws – without criminal intent (strictly speaking, without an intent to commit an actual crime, an act that intentionally harms an innocent person or his interests/property/rights), there is no real “crime,” just disobedience to authority, which is not itself a criminal act.

“…and you’re left with “no other criminal intent.”

And the people who forget to get all the empty brass out of their cars before driving through one of the forbidden areas?

Reportedly the DC police told NBC, No Magazine and Gregory disobeyed a lawful order from the police. Sounds like criminal intent to this non-lawyer

But then you need to PROVE criminal intent, which is difficult.

“…but some animals are more equal than others.” – George Orwell

Congratulations!!!!! Excellent…When will they show this on NBC???

One of the questions that has never been asked is whether Wayne Lapierre, the NRA’s president, knew that Gregory was violating the law. I have always suspected that Mr. Lapierre did. I would be very surprised that the NRA president was not aware of DC’s mag ban.

I believe one of the reasons he may not have said anything is that since the show was likely taped and not live, he wanted to give NBC a chance to hang themselves.

I keep hoping someone will ask that question one day.

As an NRA member, I thought LaPierre should have been fired for his performance that day. He should have pointed out the futility of such bans by pointing out that criminals don’t obey those laws. “As you obviously know, criminals like you, ignore magazine and gun bans, just like you did.”

I am an off and on NRA member. On because they are the loudest gun rights voice, off because of their stupidity. Off ALL the intelligent gun rights supporters out there, LaPierre is the best spokesman they could find?

Judicial Watch is one of the very bright lights working for Americans, and I’m very grateful to the Professor and them for this good work.

Note: this charge should not be on David Gregory alone.

7-2506.01 (b) No person in the District shall possess, sell, or transfer any large capacity ammunition feeding device regardless of whether the device is attached to a firearm.

So, everyone who handled (possessed) the magazine and then transferred it to another person on the show would also be guilty of this crime. From the person who brought it into DC, any Meet the Press staff who handled it, Gregory on the air, and whoever took possession of it afterwards.

I would like to know if Gregory made a ‘special’ donation to someone’s favorite charity at about the time of the police Affidavit in Support of an Arrest Record. A quid pro quo ‘goodwill’ exchange between friends perhaps?

Anyone know the statute of limitations for this? Congress could now appoint a new AG for the District

I disagree; I *want* Gregory prosecuted to the full extent of the law. DC has very strict anti-weapons laws. I want the book thrown at him – just like it would have been if he were any normal person.

http://www.washingtontimes.com/news/2014/mar/26/miller-exclusive-shock-verdict-mark-witaschek-guil/?page=all
MILLER: Exclusive — Shock verdict — Mark Witaschek guilty of possessing muzzleloader bullets in D.C.
And this is what happens when the DC police and your ex-wife don’t like you, no prior record and all.