“the main aggressor slammed his fists down on McConnell’s table, grabbed his doggie bag and threw the food out the door of the restaurant” 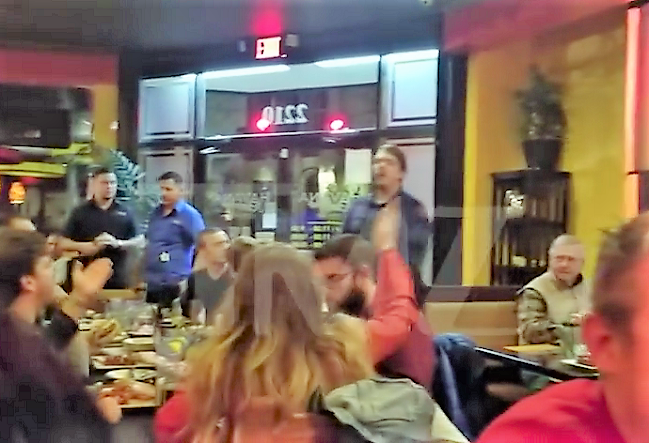 Senate Majority Leader Mitch McConnell (R-KY) has been harassed and confronted by anti-Trump and anti-Kavanaugh protesters, including outside a restaurant, at the airport, and on the street after a Georgetown University event.

This fits a pattern of attempts to intimidate Republican lawmakers and figures at the urging of Democrats such as Maxine Waters.

McConnell was out enjoying a casual meal with his wife when an angry diner started screaming at him.  Within moments, the restaurant’s other diners started shouting, too . . . at the angry diner.

Senate Majority Leader Mitch McConnell, was confronted Friday night by some angry diners who loudly berated him for his politics.

The Kentucky Senator was eating dinner with his wife at Havana Rumba in Louisville, when 4 men confronted Mitch. The main aggressor screams at McConnell, “Why don’t you get out of here?  Why don’t you leave the entire country?”

The woman who shot the video tells us, before she started recording, the main aggressor slammed his fists down on McConnell’s table, grabbed his doggie bag and threw the food out the door of the restaurant.

The woman says the main gripe seemed to be the Senator’s stance on Social Security and health care.  McConnell recently said entitlement programs are the main cause of massive debt. The woman says before she started shooting, the main aggressor was screaming that McConnell was killing people with his views.

McConnell kept his cool and afterward thanked some of his supporters, shaking their hands.

At one point in the video, you can see a table of diners shoo-ing the screaming diner with dismissive waves of the hand.  The screaming diner then turns and attempts to shout them all down; by this point, his plan, whatever it was, was seriously derailed.

A small group of angry diners confronted Senate Majority Leader Mitch McConnell at a restaurant Friday night, but were met with calls from other customers to leave the Kentucky Republican alone.

Video obtained by TMZ shows at least one diner berating McConnell on issues such as Social Security at a restaurant in Louisville. The video starts with him yelling at McConnell and arguing with Transportation Secretary Elaine Chao — to whom McConnell is married. The outlet reported that four men first confronted McConnell.

“Oh yeh, why don’t you get out of here? Why don’t you leave our entire country,” the protester tells the couple.

As Chao argues with the protester, McConnell appears unperturbed and sips on a drink. But other diners begin yelling at the protester, telling him to “leave him alone” and making shoo-ing gestures.

“The Leader and Sec. Chao enjoyed their meal in Louisville last night and they appreciate those who spoke up against incivility,” McConnell spokesman David Popp said in a statement. “They hope other patrons weren’t too inconvenienced by left-wing tantrums. As the Leader often says, the Senate will not be intimidated by the antics of far-left protestors.”

After repeated calls from Democrats for #TheResistance to confront and hound Republicans anywhere and everywhere, it’s heartening to see that this tactic will not always be welcome . . . or go quite as planned.

One of these days one of those sorry-ass SOBs is going to do that in a restaurant when I’m there and I am going to put a hurt on him/them like they have never known before but will remember for a long time.

It is what the media is waiting for. Desperate for, in fact. Chuck Clodd has been talking for days about the “Republican Mob”. He wants one of his loons shot before November.

Remember BLM blocking the freeways? They were trying to get someone killed, too. Be smart. Yell at them, make gestures, sure.

But remember what it took to control the Westview Baptist Church: large numbers of determinedly nonviolent people interposing themselves between those horribly uncivil people and their targets.

If we work together, we can stop this nonsense.

Of course, if somebody swings a bike lock at you, have at ’em.

Black Liars Movement, and these ingrates are similar to a loose bowl movement.

How about people start following Maxine around and give her a month or two of similar treatment.

Toddlers throwing tantrums. That’s what this is.

See NotKennedy, above. These toddlers need a spanking!

The jerk that is protesting Mitch is worthy of some knuckle skin deposited in between his two front teeth.

Done well, those front teeth will be gone. Jack him up and just watch the other patrons who have had enough of this stuff join right in with subduing and evicting these cretins.

Yank down their pants, pull up their shirts, up over their heads, and put them in full defensive mode. Grab their shoes and slap them up-side their heads. Show them that you mean business and then mean it.

I’m a veteran, their are millions of us, we are legion. Say the word and we’ll show you how to handle Soros sponsored hoodlums.

Thugs. Bullies. That’s what they are. McConnell is 76 years of age and Chao is 65. Note the thugs in Portland who went after a 74 year-old. What’s called for is some good ole’ ass-kickin’ ’cause unless I’m mistaken these thugs would crumble like you graham crackers.

“Leave then alone” needs to be heard much more frequently and a whole lot louder!

“Beware the fury of a patient man”. John Dryden

I don’t really believe that people like McConnell go out to eat in public without taking security precautions. I am sure there are security guards planted around them.

Maybe more prominent Republicans should dine out to force more of these confrontations to push more voters over the edge about Democrat fascism.

BTW, also today, a mob of protestors harassed Nancy Pelosi calling her (in English and Spanish) and Democrats communists. Finally! Someone who is not afraid to call it what it is! We need more of that!

Agreed. That line I used is from the writer nearly 300 years ago I believe. It can be extended from one man to many men to many people to an entire political party. Patience ends.

Great quote and spot on. It takes a lot of energy to stay angry and little to be patient and patient people think more clearly.

Given their propensity to “flash mobs” and using social media for organization, it would be very easy to lure them into an ambush situation to administer some harsh lesson in civility. After a few lost teeth, black eyes and other general beat-downs they would retreat to mommy’s basement and henceforth shut the fuck up.

More important than bodyguards right now is video. If he’s wise, any Republican bigwig should have someone around who “just happens” to have decent video equipment ready to roll. The Mob is its own worst propaganda agency, and the R’s should be helping them out with their self-inflicted wounds.

“The woman who shot the video tells us, before she started recording, the main aggressor slammed his fists down on McConnell’s table, grabbed his doggie bag and threw the food out the door of the restaurant.”

That’s Robbery by Snatching, which is a felony in many states.

There’s your sign! Full body slam and take him down, hard.

Restaurants that allow this to happen without ejecting the miscreants themselves or immediately calling the police need to be assumed to be in full agreement with antifa and treated accordingly.

A restaurant serving Ted Cruz and his wife did so just recently, yes?

I would not support such protests in a private establishment if it was Nancy Pelosi or any other Democrat. (I’m not saying Hillary Clinton because she has Secret Service protection for life.) It’s a bad idea and should not be tolerated by civilized folks.

Hope the Turtle learns a hard, hard lesson – one that’s irreversibly burned into his corrupt mind.

Still, we’d be better off replacing him.

Yikes. At least 12 people who forget who McConnell is:

GOP rep. says McConnell is ‘head of the swamp’
https://thehill.com/homenews/house/343889-gop-rep-says-mcconnell-is-head-of-the-swamp

McConnell Will Do Everything He Needs To Stop Moore From Winning The Senate Seat:
https://www.youtube.com/watch?v=LkGwPxKnx3o

Levin: Mitch McConnell should be removed after ‘shocking’ and ‘disgusting’ corruption allegations:
https://www.conservativereview.com/news/levin-mitch-mcconnell-removed-shocking-disgusting-corruption-allegations/

While I don’t favor restaurant harassment – or any other kind – I have to say that as long as the Left keeps this up, it is only going to hurt their cause and help ours.

So I advise the Left to tone it down and become civil. Good thing they won’t take my advise.

The best way for Cocaine Mitch to respond is during the lame duck session of the Senate is to approve some 40+ nominees to the bench.

That would be great, but is there a way to accomplish it?

There are 49 nominees waiting on full senate confirmation.

Until our half-assed leftists lose interest in their tawdry bolshevik-lite street theater, Mitch and Elaine might consider dining with a few Deplorables once in a while. We’re more than just cash cows to be tapped for this or that silly progressive pipe dream. We transcend socioeconomic categories. Many of us have all our teeth, even.

Until someone starts making them very sorry, they will continue acting up.

A doggy bag, containing food purchased by the diner is the diner’s property. There are laws in every state in the Union making depriving a person of their property a criminal offense; at least misdemeanor theft. Just as with immigration, can someone PLEASE enforce our laws?

Littering fines are nice and expensive, too.

Don’t look for anything from him – except to resign quietly when Trump asks him to in 3 weeks.

Occasionally you have a cogent thought. This is not one.

GOP seems to be eating out more with cameras handy. Hoping to maximize the fail biggly effect of this tactic at the ballot box?

I keep hearing it is “both sides” that are the problem. Where are the protestors throwing Maxine Waters’ or SanFranNan’s leftovers out of the restaurant? Shouting down pols at restaurants and dinners?

Next time I hear a “both sides do this”, the lunkhead had better post a list of examples where BOTH SIDES do it. Otherwise, he better learn to change his story or shut his piehole. Conservatives do NOT do this; we want to live our own lives, not have other people tell us how to live it like the nanny lieberals like to do.