No, Rubio Did Not Support Cap and Trade

No, Rubio Did Not Support Cap and Trade 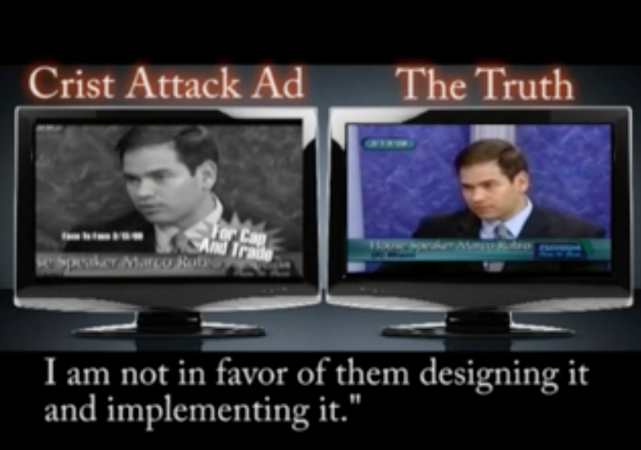 Wednesday morning, an abbreviated interview from Marco Rubio’s time as Speaker of Florida’s House mysteriously surfaced and began bouncing its merry way through the political corners of the internet.

Judging solely on the content of the 2008 clip (which cuts off Rubio mid-sentence) the viewer is led to believe that way back in the day, Rubio advocated for carbon taxes and cap and trade. Basically, Al Gore, Jr.

It concludes with Rubio saying, “I am in favor of giving the Department of Environmental Protection a mandate that they go out and design a cap and trade or a carbon tax program, and bring it back to the legislature for ratification some time in the next…” and that’s where we’re left hanging.

There’s just one teency weency problem though — that’s not what Rubio said, at least not entirely.

Immediately following the end of the selectively edited (to borrow a phrase from our progressive friends) video clip, Rubio says:

From what rank basement was this latest wanna-be hit job dusted off and let to roam free? That would be the one containing old Charlie Crist attack ads:

Rubio’s remarks in their complete, unedited, nothingburgerness can be viewed here.

In an op-ed published in the Miami Herald, penned by Marco Rubio in July of 2007, Rubio criticized Crist’s proposed energy mandates saying, “the government mandates he has proposed will not only fail to achieve their desired result, they carry actual negative consequences.”

As an alternative to mandates, Rubio proposed tax incentives. Those incentives were passed by Florida’s house and vetoed by then Gov. Crist. “The potential to integrate greener approaches into the fabric of Florida’s economy is unlimited, but we must be willing to embrace the free-market approach – not European-style big government mandates,” Rubio wrote.

Floridians who were involved in the fight against cap and trade at the time provide further context.

.@TheRickWilson That's exactly right. It was @MarcoRubio who STOPPED the cap-and-trade regime in Fla that many supporting Jeb today wanted.

And also this little story:

1/ I've gone over this before on the @marcorubio cap-and-trade crap. Since I was um *there* for this shenanigan, let me lay it out.

2/ It was a legislative tactic to roadblock Charlie Crist. Full stop. Read the op-eds and articles and attacks by Crist in the 2010 race

3/ This is so asked-and-answered it makes my head spin, but you understand WHY the Bush people are running this line, right?

4/ It's because they're regurgitating the Charlie Crist oppo book on Marco (yes, I have a copy) *word for word*…it was debunked then

5/ …and if you follow @pounderfile now, he'll have plenty more to follow. If you want to see the 2010 response; https://t.co/kKsEPVEE6X

6/ Crist and a few liberal FL Senate members were about to make a fashionable cap-and-tax move. Marco's moves killed it. Now I know that…

7/ You'll be shocked to find a lot of Jeb's Florida people were yuge Charlie Crist fans. Some still are. That's where this (and several)…

8/ other even shadier attacks have come from. It's tainted by the Crist virus, and Jeb should know better, and be better than this.

9/ It is a lie from start to finish, and both the campaigns pushing it (you too, Cruz and Christie) know it. As does Boy Ahab at Trumpbart.

Recycled Cap and Trade Attack Rating: LAME and a half.

You know who else likes Cap and Trade? Mitt Romney!

Anyway, issue is moot. Gang of Eight is all anyone needs to know about Rubio.

So now we can support Jeb Bush’s shadow and the GOPe handlers!

Whew. Close one. That might have cost Rubio the nomination.

Not to worry, Rush just declared Rubio dead and buried now and forever. After all, Nikki killed Rubio’s campaign. At least according the Trump’s biggest sycophant.

I wonder how many other ‘GOPe’ candidates have given millions of dollars to the Clintons?

You mean BESIDES Duh Donald and MAYBE the Bush family…???

So is Rubio against cap and trade the same way he was against Amnesty ?? Rubio is a loser. Not surprising the GOPe types love him.

Kemberlee Kaye. I was getting a little worried that you were a shill for one or another of the candidates. Obviously, I was wrong. You are just trying to ensure the truth gets out.

Thank you for your feedback. I’d like to welcome you to read the following posts I’ve written concerning other candidates; Sen. Cruz in particular (whom I’ve defended more than any other candidate):

There are plenty more concerning other candidates should you care to peruse my previous posts. Thanks, and have a lovely Wednesday.

Thanks for the summary of your articles. I will them all.

Should read “Thanks for the summary of your articles. I will them all.”

I will try again. Should read:

“Thanks for the summary of your articles. I will read them all.”

This month, excluding Hillary, it’s been:

Doesn’t look balanced to me.

Great post but I can only give you 1 thumbs up sadly.

Rubio is innocent of this hogwash. Unfortunately for him, it isn’t cap and trade that is poisoning his pill to the electorate. It’s getting rolled by Schumer and continuing to provide glimpses into his pro-illegal-alien core beliefs that is keeping him anchored. It’s a shame, as he’s an ideal candidate with his looks and passion and topic mastery. His Achilles heel is more like a club foot.

It is a disability all of his own making.

These clips you so eagerly post — they were from the time period when Rubio was repeatedly lying to voters and saying he would oppose Amnesty, right?

And just before Rubio started working for Chuck Schumer (D) and lying to everyone by fraudulently trying to pass their Amnesty bill off as a security measure, right?

I just want to confirm the timing.

Also, isn’t that the same Rick Wilson who said and I quote “They’re still going to have to go out and put a bullet in Donald Trump”? Seems like a nice objective source you splattered all over the page without any context.

I dunno…Florida politics being what they are…but I think it was about the time that Duh Donald was spreading money around to try to get the state to change the law so he could build a casino. Which he FAILED to do.

Which HE lied about in the debate when it came up with Jeb!, while we’re confirming timing and lies and things…

Rubio thinks carbon is a pollutant? That’s enough reason to avoid him.

Carbon is an element (C). It is not a pollutant.

Rubio bought right into the global warming narrative of the Democrats as if nothing could be done to rectify it then rationalized a bi-partisan bill.

I call that rolling in the path of the ‘possible.’

So Rubio flip-flopped on Cap and Trade – he was for it before he was “agin it.”

Worse, his language exposes his Warmist bias. For him to ever believe that life-giving CO2 is harmful to this planet means that he listens to the climate fakers and that is sad, sad, sad.

Buh-bye Marco. See-yah in the Senate where you can continue to rev-up the ill-gotten power of the EPA.