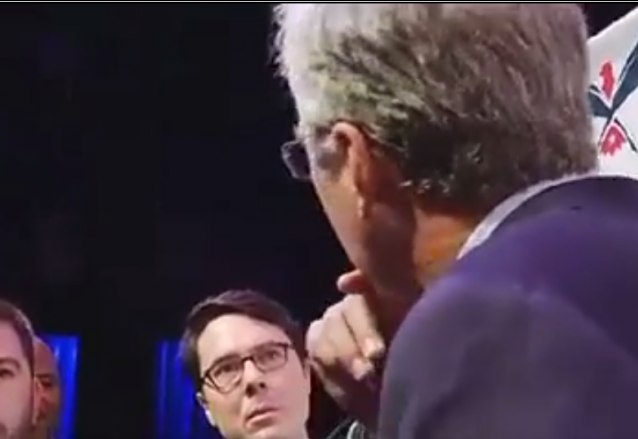 Jeb Bush is being raked over the media coals for supposedly expressing a callous disregard for the Oregon mass shooting victims by saying “stuff happens.”

But those words in a long dialogue were taken completely out of context and promoted by New Yorker reporter Ryan Lizza. It was then picked up by others in the media based on Lizza’s tweet about it, which was shared over 1000 times on Twitter.

Here’s how it went down.

Former Governor Jeb Bush was questioned about Thursday’s UCC tragic shooting during a press conference held Friday afternoon. Ryan Lizza, a reporter for the New Yorker and CNN contributor pulled two little words from Bush’s answer, pretended they were indicative of Bush’s statement as a whole, and then kept digging.

Taken as Lizza presented, Bush sounds dismissive at best. “Stuff happens”? Really?! Dude shoots up a school and all Jeb can muster is “stuff happens”?!?!

Thankfully, we don’t have to take Lizza’s word for it. Video of Bush’s full remarks place “stuff happens” in context. There, those two little words are perfectly acceptable.

Here’s full video of Bush’s “stuff happens” remarks. Judge for yourself if it’s as callous as @RyanLizza suggested: https://t.co/0B7OvkDhCp

Yup. Watched it again. Bush clearly said “stuff happens” as in “as a governor there are crises of all sorts.” Not shrugging off shootings.

And the transcription of the full quote:

This is the full "stuff happens" quote from Jeb pic.twitter.com/0CAOnNBf4f

The most damning part of StuffGate is not anything Bush said — it’s Lizza’s determination to twist “stuff happens” into a gaffe that never was. Video shows Lizza pressing the issue with Bush, despite Bush’s continued explanation of his full remarks:

@BecketAdams Here's Lizza going at it with Jeb over the quote. http://t.co/VvOHYFU423

Judge for yourself what Jeb was trying to say. Context is warning about passing gun laws in the wake of a tragedy. pic.twitter.com/0k8yxuEDF8

Worse yet, the normally reliable Jonathan Karl of ABC News raised the issue at Obama’s press conference. Karl gave a little more context, but not much, so now it is all over the media and dominating the news cycle:

Fortunately, there is a lot of pushback, which is needed.

Whether you like or hate Jeb Bush, or someplace in between, we can’t stand for these media hit jobs on any of our candidates. If they’re distorting Bush today, tomorrow it will be someone you might like more.

The media is the problem. And it’s only going to get worse.

Stuff DOES happen. More people died yesterday in a military plane crash (one) in Afghanistan than were killed by a madman in Oregon.

Nobody is demagoguing that. No putative president is lying about it. Nobody is making a move to assault a natural right or the Constitution.

It strikes me as odd that of all the “mass shooters” from Columbine to Phoenix to Denver to DC to Connecticut to Charleston to Oregon, the only one of whom his politics are widely reported is the one which was NOT a diehard leftist?

This incident is indicative of the depth of the media’s enmity towards Republicans: Bush isn’t even in the top tier in the polls any more, and apparently falling still. They are committed to defending their Narrative against any critique.

It’s no different than feminists attacking scholars for a shirt or a joking remark. Leftists attack anyone who will not toe their line. NYT, BDS, NBC, BLM, CNN, PP, they will not tolerate the slightest dissent from the Party Line.

“President Bush III” is not something that brings pleasure to my ears, but this kind of BS should not be permitted from professional journalists.

And I don’t mean “let government regulate journalism”. Isn’t there some kind of professional association like the Bar Association for lawyers?

Here’s a link to their Code Of Ethics. As you read them, and once you’ve stopped gagging, you’ll note that today’s ‘journalists’ don’t just break a few ethics rules here and there, they break all of them. And I mean that literally:

I’ve been screaming about this for decades (I was in the newspaper business for many years). SPJ even tightened up the code 20-odd years ago, and it has been ever more ignored in the major outlets.

There is no more journalism. There is only propaganda.

You mean the Bar Association that disciplines dishonest attorneys and strives to enforce the highest standards of honesty, ethics and professionalism?

If you ever find it let us know.

I am not a JEB! fan but this is nonsense. This is why the media is hated and held in such low esteem.

Really, what difference does it make?

There’s nothing newsworthy about what an ex-Florida governor thinks about a criminal atrocity in Oregon. So the press has no reason to ask him questions about it, except to kill time or to hunt for “gotchas”.

Obviously, this time they’re looking for a “gotcha”—and if they don’t find one, they’ll make one up. Standard Operating Procedure, straight from Liberal Journalism 101.

Once Bush is put in a position which he has to explain, he’s already lost the PR skirmish, no matter how unassailable his position actually is.

Now Bush certainly knows this. Why does he fall for it?

Well, that’s an insider skill that only candidates in the upper 95% of polls are likely to know.

No one can give a series of spontaneous and off-the-cuff in-depth answers to random questions without making some error, of course it is impossible to defend against innocuous phrases being deliberately taken out of context to deceive readers, as Lizza did.

The media not only does this type of smear “journalism” on Bush. They do it even worse to conservatives.

You mean like saying that Scott Walker called for a wall between the U.S. and Canada?

No. That would be ridiculous. No one would fall for that.

I would be for it – as long as he makes Canada pay for it!

Looks like the left is trying to torpedo another Republican with another version of Macca. Their favorite candidate is sinking faster than the Titanic and the lifeboats are already full and headed away from the wreck. So they have to find a way to salvage something from the mishap.

Of course. This inane and insulting farce will not stop because there’s no reason for it to stop. The media gets what they want and feel no pain for getting it.

Several problems here. One, Bush is inept. He hasn’t the discipline not to riff about something in front of the media in a colloquial way, and he can’t shake the residual delusion that if he does he’ll be interpreted in good faith. He doesn’t — and never will — internalize the reality of the media’s malice and agenda. Yet he still lives in basic fear of them. So it’s the worst of both worlds. This is essentially the RINO world.

Trump can riff because he isn’t afraid of the media, or not as afraid as the others are. He also doesn’t speak in stupid, affectedly casual “I’m a regular guy” cliches like “stuff happens.”

Bush has to make this guy feel pain for what he did. Will he? Ben Carson made Jake Tapper pay for misquoting him, though he did it in a soft-spoken style.

Yes, these people are the enemy. You have to make them pay. However you do it, you need to do it. My advice is to actually pick fights with them and then humiliate them. Gingrich had the right idea, though even he didn’t go far enough.

I don’t see what the big deal is with Bush saying, “stuff happens.”

After all, Obama in his press conference, reflecting on gravity of so many lives being killed in the shooting, could only muster saying, “this has become routine.” In fact, he repeated the careless attitude saying his “response here at this podium” was just “routine.”

In 2013, Obama said in response to children being gassed in Syria, “Stuff happens.”

I’m sure when the Marxists start confiscating private property that Obama will say ” You can keep your stuff if you want to” We will see how it works out. Me I have always figured in the end ,us Old white guys will get marched into concentration camps when we get too old to fight.The women and minorities will get white males first then minority males ,as the world slowly dies from the fact that women can invent nothing and fix nothing ( for the most part,)the end will be when the frozen sperm freezer breaks down and no one has the skill to make a part that is nonexistent. Sad but probably true.

” I’m sure when the Marxists start confiscating private property that Obama will ”
ask George Soros who had much experience in 1944’s Hungary confiscating Jewish property. The “most exciting time of his life”!

It wasn’t the best answer but Bush didn’t deserve that treatment from Lizza. Disgusting how the media twists, perverts and rips things out of context.