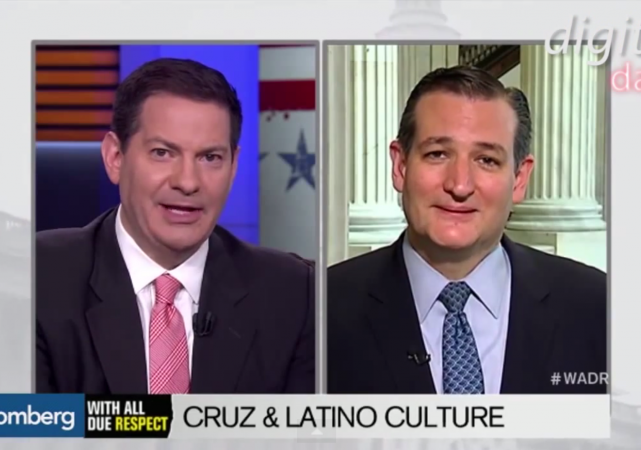 Thanks to Mark Halperin, we can all rest easy knowing that Presidential hopeful Ted Cruz, is in fact, authentically Cuban.

In a bizarre line of questioning on Bloomberg’s ‘With All Due Respect’, host Mark Halperin grilled Sen. Cruz on his Cubaness.

Questions began with, “when you filled out your application to Princeton, to Harvard Law school, did you list yourself as an Hispanic?”

Then moved to cuisine, “do you have a favorite Cuban food, Cuban dish?” Cruz tried to answer but was interrupted by Halperin demanding to know his favorite Cuban dish. And it didn’t stop there.

Halperin continued his interrogation until making a final demand — that Sen. Cruz welcome Sen. Sanders to the presidential race, with the requirement that he do so, “on Espanol,” whatever that means.

I was born and raised in Puerto Rico, and, if I had $5 for every liberal idiot who looks at me and says “You don’t look Puerto Rican”, etc., because I don’t fit the Liberal template of what a Lateeeno/Lateeena should be like, this blogwouldn’t need to carry ads.

Frankly, by now I expect to consistently encounter discrimination and bigotry from Liberals. It’s in their mindset – identity politics is their lifeblood….

Or perhaps Halperin was disappointed Ted didn’t invite him over for cortadito and pastelitos de guayaba. Halperin capped it all off by asking Cruz to “say something in Spanish.”

Cruz is much too polite, but I’m not. Here’s something in Spanish, Halperin,

Observers weren’t too thrilled with the single-note interview, and for good reason:

Has anyone asked @MarkHalperin if he's really Jewish, or just a fake? What kind of Kosher foods do you eat, Halperin? Show me your Draedel.

Not a big Ted Cruz fan, but this is pretty nasty stuff. http://t.co/X8Jul106Qd

Is the @GOP going to allow @bpolitics employees to racially humiliate Republicans?

Is this behavior acceptable to the rest of the media?

"I'm curious about your Irish identity Gov. O'Malley. Will you preform the Riverdance for us right now?" http://t.co/RHRI1ugzG7

Due to his sick desire to humiliate Repubs based on their identity, I strongly suggest gay Republicans stay far away from Mark Halperin.

Until every Italian reporter proves they can make pasta or condemns Mark Halperin, I will question their identity.

Cruz should have demanded Halperin miss three free throw basketball shots to prove he is white.

I look forward to Halperin’s interview with Eliz. Warren when he asks her to do an authentic Native American rain dance. Not only will it prove her NA bloodlines, it’ll relieve California’s water problems.

And when Halperin interviews a gay candidate, will he ask them to sing some Broadway show tunes, and name their favorite interior designers?

Good Lord, can you imagine if Chris Wallace had interviewed Barack Obama in 2007 and demanded to know if he likes watermelon and fried chicken? Which one is best? What about collard greens? Can you speak ebonics? The prog borg would have absolutely melted down, hypocritical little lying bitches that they are.

Yes, I don’t recall any reporter ever asking candidate Barack Obama if he had described himself as black, or claimed to have been born in Kenya, on his college or law school applications. And in Obama’s case, those questions would have been much more relevant, since Obama appears not to have been qualified for Ivy League admission by merit, while there is no question that Cruz was. (Also, there is still the mysterious issue of the fact that Obama’s book publisher’s bio falsely described him as having been born in Kenya for a couple of decades, and wasn’t corrected until Obama decided to run for president.)

I just cannot wait until Halprin wades into Warren on her Indain-ness.

Maybe Cruz should have said;

And if Cruz were a Democrat, Halperin might have responded with “Yo quiero tu cuerpo mi amigo.

Well, that tears it. If I ever have to vote for who’ll be president of Cuba, I won’t even consider Cruz.

In a quick turnabout, Ted Cruz showed grace and no hard feelings when he vouched for Mark Halperin’s Jewish roots, saying Halperin was “a true Putz.”

You guys are being unfair.
I am sure Halperin asked Obama about his favorite Kenyan food. He surely also asked him to sing a lullaby in swahili and to demonstrate the Ohangla dance and …

UI think Cruz should have asked Haperin if he thought JFK was justified in betraying the la Brigada 2506.

Haperin is probably trying to cause division, maybe thought a Cuban dialect sound bite might help divide Cruz from other “Hispanics” (or is it Latinos now?).

It is so sad our next president will be elected largely on phony identity politics, combined with $10 billion in free propaganda for Democrats from the MSM, and as much hate as the left can stir up.

As was our last president.

He should have asked him about lacrosse and LaBatt to prove he’s really from Canada.

This was an a$$hole treating a candidate with disrespect because the policy of his employer is to pretend that all Republicans are weirdos. Bloomberg should be asked to apologize.

Mark Halperin: So, you say you’re Cuban? Here’s some tobacco leaves. You have 5 minutes to roll a decent cigar while singing the Cuban national anthem. (presses stopwatch) Go!

By report, Julian Castro, who is #1 on Hillary’s VP list, scarcely speaks Spanish. I will eagerly await Halperin’s interview.

Further, I wonder what languages Halperin speaks. Pronouncing “en” approximately as the English “on” argues for his knowing French, not Spanish.

Or only knows bad English.

That this happened over a week ago shows no one saw it……yet it so blatantly exposes the left’s hypocrisy and double-standard regarding Republicans and minorities in the Republican Party. Glad it’s finally getting some exposure!

Is there a Twitter outrage hashtag yet? Or a post on Facebook calling for apologies from Bloomburg and Halpern? I hope they are feeling the much-deserved heat over this racist attack on Cruz.

This is the left’s typical Alinsky attack mode: attempt to expose the Republican “target” (read very real threat and enemy) as: crazy, stupid, a fraud, or make up stuff (and creatively edit stuff) to make it APPEAR to be the case. Ridicule and lying insults at a “target” are Alinsky 101.

Rules for Radicals, Rule 13, in particular.

Well, there is a mocking one: #HalperinQuestions

It’s juicy, too. Check it out:

Halperin was simply trying to determine if Cruz was actually born in Kenya.