Is Ted Cruz a hypocrite for requesting federal aid after Texas flooding?

Is Ted Cruz a hypocrite for requesting federal aid after Texas flooding?

A refresher on that whole Hurricane Sandy federal aid fiasco 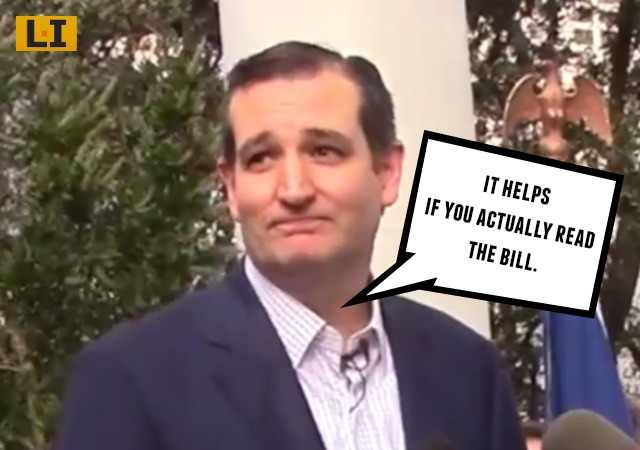 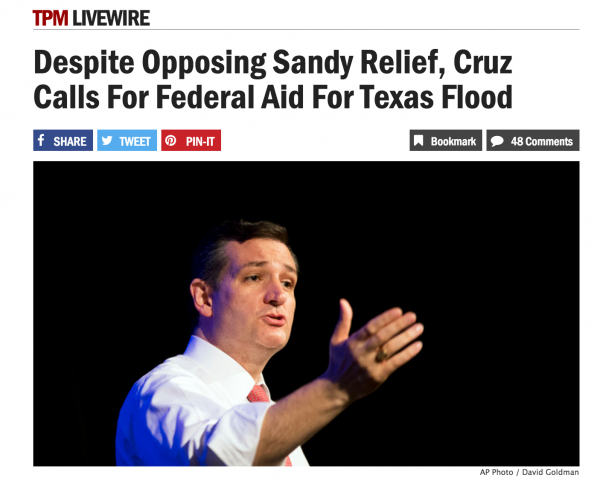 The NY Daily News had the same “story” yesterday: 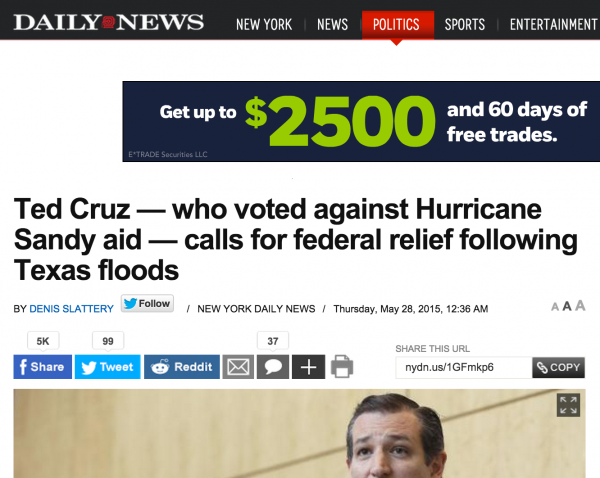 The TPM article itself isn’t necessarily wrong. It’s fairly straightforward. But in order to support the headline, along, drawn out Hill battle was completely omitted.

“There are a series of federal statutory thresholds that have to be satisfied. Initially, it appears those thresholds are likely to be satisfied by the magnitude of the damage we’re seeing,” Cruz said while touring the flooding in Wimberley, Texas, according to Texas television station KSAT. “Democrats and Republicans in the congressional delegation will stand as one in support of the federal government meeting its statutory obligations to provide the relief to help the Texans who are hurting.”

TPM mentions Cruz voted against, “a federal aid package in the wake of Hurricane Sandy, and claimed that he opposed the bill due to spending in the bill unrelated to storm relief.” Also true.

But what was in the Hurricane Sandy Relief package that caused such a fuss?

President Obama didn’t bother to request federal aid until a month after Hurricane Sandy leveled parts of the northeast, so the matter wasn’t one being treated with urgency. According to Heritage, who dissected the $60 billion bill:

Most of the funding, however, goes well beyond assisting actual victims. Moreover, none of the spending is offset by reductions elsewhere. It will be allowed to exceed current spending limits by exploiting two exceptions built into the Budget Control Act (BCA)—one for additional “disaster” relief funds, and another for “emergency” spending.[1]

…Some of the items seem justified as mitigation of damage caused by Sandy. Much of the other funding is clearly not or is at least questionable.

…The legislation also contains $5.4 billion for repairing tunnels and other infrastructure damaged by the hurricane, another legitimate proposal.

As a point of perspective, with the vast majority of homes and businesses privately insured, the total cost estimate for the entire private industry is just more than $20 billion.[6] Why is the federal spending proposal three times as large?

Not only does this act add to the deficit, but it is also reflects another symptom of government growth: over-federalization of natural disasters. In less than two years, the Federal Emergency Management Agency (FEMA) has issued a stunning 353 disaster declarations—despite the absence of major hurricanes or earthquakes (except Hurricanes Irene and Sandy). This high operational tempo keeps FEMA in a perpetual response mode, leaving little time and few resources to prepare to handle a real catastrophic disaster, such as Hurricane Sandy.

Senator Kelly Ayotte (R–NH) summed it up well: “[I]f a main goal of the Sandy relief legislation that passed the Senate was to quickly get resources into the hands of those who need it most, the final product fell short.”

Republicans in the Senate proposed amendments that would’ve specifically funded Hurricane Sandy relief efforts to a predictable end. But I’m sure that was left on TPM’s cutting room floor too.

“TPM is a left-wing rag, of course they’re going to be misleading!”

I get it, I really do. Left uncontested, misinformation like this climbs its way up the news chain and into political lore. And we just can’t have that.

Toilet Paper Mau-maus is an infamous organelle of the Collectivist Lie-0-tron.

Lying is what they do. It is who they are.

Why should only the Communist Democrat counties get all that taxpayer money alone…….

I’m not a fan of Federal disaster aid in general.

I think it’s an area of legitimate concern for states, and one they can deal with very nicely if left the resources for it.

Moreover, the American PEOPLE…left with resources and their own devices…are KNOWN to care for each other in times of crisis. There is NO example of that in the entire history of the world that surpasses what I just cited.

And, I really like the idea of balancing the damn budget in the process.

GASP!!! But how you ‘xpect all those insurance companies, and mortgage companies to finance rebuilding in those flood plains, and beach erosion zones?

Lies of mischaracterization — a form of deception — are quite common.

That said, I don’t actually blame the reporters or editors. This is, after all, about influencing politics or consensus. It is our responsibility to separate the wheat from the chaff as it were.

Thanks for the clarification, Ms. Kaye. Opportunistically diversified legislation, executive orders, etc., are a breeding ground for corruption.

Uh, no. Journalists are supposed to provide objective reporting of the facts in an unbiased fashion. Otherwise they’re not journalists.

Instead, what most of them these days do is prostitute themselves for the Democratic Party. The lucky ones “get hitched” and go to work for the regime. At that point at least it’s clear that they’re simply shoveling propaganda.

You want a good howling laugh that will bring tears to your eyes? Take a look at the Society for Professional Journalists Code of Ethics and then go point-by-point and think of just about any mainstream reporter and score them:

If Journalists were really “professionals” they should be subject to Errors and Omissions lawsuits for the damage they’ve wrought against us all.

Uh Oh. I can hear the Chicago Democrat ticks already…..

“On May 12th, Moody’s Investors Service fired the shot heard around the world. The credit rating agency downgraded the City of Chicago and bonds issued by related tax districts to speculative (“junk”) status.

…the bonds had already been trading at junk levels for several months. This should have been a straightforward event for the chattering class to process intellectually….

Oddly, however, Moody’s downgrade sparked a debate over whether Moody’s was being “fair” to Chicago…

22 years ago, when Democrats ran North Carolina, I had a nearby water main burst that got my driveway all wet for two days.

My share of the federal disaster relief was $47.3 million. But I don’t like big government any more.

Who needs the feds? The Clintons can setup a foundation to collect funds for flood relief in Texas and can get it up and collecting a lot faster.

Just like they did with all those billions in Haiti relief funds huh? I don’t expect either of those scumbags to spend much time down here. They’re probably afraid they’d be invited for a drive-by tour of the local school book repository. I’m sure it would be a nice day for a drive.

Since when has there been a requirement for the left to actually use facts for their accusations? They and the msm make a living from misquotes, fabrications and out of context quotes. Without these arrows in their quiver they would be speechless.

Never understood how liberals can be so effective at using willful ignorance of facts and law with such steadfast conviction.

Last time I checked the citizens of Texas are still paying federal taxes and therefore entitled to their aid funding for disaster relief. Ironically, the liberals want to let in a bunch of non-tax paying illegals and the government of TX is doing what they can to stop this lawlessness.

The word “hypocrisy” is used as a weapon by many Leftists against conservatives. I don’t think they really know what that word means or how it differs from “contradiction”. But words are just tools for propaganda on the Left. They change their meanings as is called for in the moment. Truth is way second to narrative.

Hypocrisy, maybe not or maybe not when Ted’s wife quit her job and he signed her and the kids up for Obama Care.

this isn’t a case of following the law or not. The law does not require Cruz to get health insurance on the exchanges.

First off, the bill Cruz voted against was “H.R.152 – Making supplemental appropriations for the fiscal year ending September 30, 2013, to improve and streamline disaster assistance for Hurricane Sandy, and for other purposes.” Yes, that’s its official title. It’s split into two divisions; Division A: Disaster Relief Appropriations Act, 2013 and Division B: Sandy Recovery Improvement Act of 2013. Ted Cruz had no hand in the 17 amendments, although the two biggies were by Republicans. H.Amdt.3 — Rep.Rogers,Harold [R-KY-5] provides $17 billion in emergency funding to address immediate needs for victims and communities affected by Hurricane Sandy. H.Amdt.5 Rep. Frelinghuysen, Rodney P.[R-NJ-11] provides an additional $33.677 billion in total spending to cover current and anticipated needs in the wake of Hurricane Sandy. Check out the bill for yourself: https://www.congress.gov/bill/113th-congress/house-bill/152 If Cruz had a problem with the bill in it’s entirety, he could have tried to seperate Division A from Division B, making the Sandy Recovery Improvement Act of 2013 a stand-alone bill. He didn’t, so he can’t use ANY excuse whatsoever.

Christ, when up against the wall I guess Right wing publications aren’t above lying to defend their “Champion” to boot.