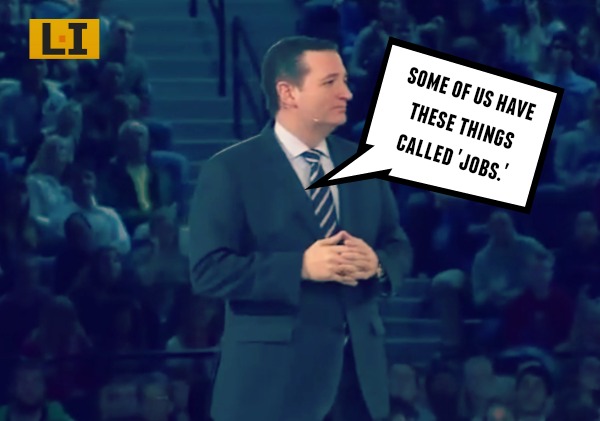 It’s been less than three weeks since Senator Cruz announced his presidential candidacy. First, Ted Cruz supposedly scared a child in New Hampshire, only he didn’t. Then, Cruz was a hypocrite for exploring health insurance options on the exchange… just like the rest of Congress. And now? ONE TIME TED CRUZ HAD A JOB.

In his bio on his presidential campaign website, Sen. Ted Cruz (R-Texas) boasts of what he did as Texas solicitor general to defend the Second Amendment, the Pledge of Allegiance, and US sovereignty—all conservative causes. But Cruz does not detail another important chapter in his legal career: his work as a well-paid private attorney who helped corporations found guilty of wrongdoing.

We will pause here to momentarily savor Corn subtly arguing the guilty ought not be privy to a defense.

Corn prattles on, feebly attempting to depict Sen. Cruz as a heartless, corporation-shilling, money-grubbing fraud. Though some would argue these are the virtues of a good attorney.

But much of the time, Cruz represented corporate clients. He was a lawyer for Kraft in a major lawsuit against Starbucks. He represented Pfizer when a California county accused the drug manufacturer and other pharmaceutical firms of overcharging. (In a win for Big Pharma, the Supreme Court tossed out the case.) He defended Eagle Freight Systems when drivers sued the company seeking unpaid overtime wages and expenses. (Cruz lost a bid to uphold a lower court ruling that shut down the drivers’ suit. Two years later, when Cruz was no longer involved in the case, the trucking company prevailed.) In a controversial move, he represented a Pennsylvania developer who was a central player in a corruption scandal that exploited juveniles, handling a dispute this crooked developer had with his insurance company.

Cruz, a tea party favorite who calls himself a “courageous conservative,” has railed against “crony capitalism” and decried “corporate welfare.” He has boasted that he authored “legislation to end federal dollars subsidizing corporate fat cats.” Yet as a private legal gun for hire—who billed at least $695 per hour—Cruz sometimes defended corporations that engaged in sleazy practices to screw the little guy or gal. Here’s a look at two of those cases.

Citing two cases out of the entirety of Cruz’s legal career as damning evidence of the fact that Cruz is unprincipled, is weaksauce to say the least. But to the Corn’s of the world, ‘corporation’ is a four-letter word and those that associate with c*******ions may as well be evil incarnate.

Forget that in dealing intimately with corporate giants, Cruz might have a unique understanding of just how nasty some of these behemoths are willing to be… pssh… Cruz was out to exploit the little man! (See also: Cruz’s time at the FTC)

Corn’s intrepid journalism also unearthed this gem from another attorney, “to Gordon, Cruz—who had already established a reputation as one of the nation’s leading appellate attorneys—had not come across as impressive or unusual. “He was a run-of-the-mill corporate defense attorney,” she says, “who’d defend anything anytime a corporation wants to defend something.”” So, he did his job. Problematic, indeed.

But the real clincher in Corn’s story is the startling revelation that Cruz did not win every case. I know, I know… we were just as shocked as you. What was Sen. Cruz thinking, having a job in the private sector and not wining every.single.case?! The nerve of this man…

We therefore rate this latest ‘attack’ on Sen. Cruz as a 4 out of 5 on the Lameness Scale, with extra points awarded for the necessity of adding this post to the world’s search engines.

David is full of Corn. If he wasn’t pathetic and pitiful, nobody would read his crap. As it is, people read it just to validate that they aren’t as vacuous as he is. And they’re grateful as heck about it.

Corn is a worthless, far-left hack and has never been anything but a propagandist.

His main practical use is to identify idiots, which are the people who use Corn articles as “evidence” for their leftist arguments.

He was the only possible hire who could have made Mother Jones less credible, so of course they spared no expense in getting him.

Tomorrow in Jonesing For Mother…

Hillary Clinton defended a baby raper and violated legal ethics in the process.

If Ted Cruz ever gets pressed on this “job” thing, he should take a page out of Rand Paul’s book and refuse to answer until the media forces Hillary to answer similar questions.

File this under “that’s all he could come up with?” and rejoice.

The correct Southernism would be: “blown the lid plumb off”.

But to the Corn’s of the world, ‘corporation’ is a four-letter word and those that associate with c*******ions may as well be evil incarnate.

Except when that lawyer’s name is Elizabeth Warren, of course.

Or Laurence Tribe for that matter.

No, wait, Tribe is not a she (yet), so he is “fair game” to ridicule as opposed to the “fair sex game” as in Warren’s case or Hillary’s case.

This is the same David Corn of Mother Jones who was behind the Romney “47%” tape from that private fundraiser, the tape with a couple of minutes mysteriously missing.

He’s not a journalist by any stretch. He’s just, as Glenn Reynolds would say, a Democrat operative with a byline.

In an age of joblessness, having a job is a revolutionary act!

(paraphrased from George Orwell’s, In an age of deceit, telling the truth is a revolutionary act!)

You mean he had a job as a corporate attorney just like Michelle Obama and Hillary Clinton did? And didn’t Elizabeth Warren operate a covert corporate legal consulting service under cover of her Harvard position?

Cruz was not a “corporate attorney” as such. He was a very talented appellate attorney.

Warren was not really “covert” since her name appears on public-record pleadings. Whether she had a conflict is an open question. But her being a grinding hypocrite is NOT. See also flipping, houses.

I’d call Elizabeth Warren’s law practice covert (or at least an attempt at covert), as she explicitly failed to join the Bar in Massachusetts, and listed that as her “primary practice location” with the Texas Bar (which she ALSO failed to do her CLE to maintain her Texas License).

Warren SHOULD have been disbarred for UPL. The fact that she was allowed to make her Texas license “inactive” rather than being disbarred makes a mockery of the Ethics rules and the duties a Texas Lawyer has to the profession and the public.

Was he the original corn flake or did Kellogg’s invent the term?

Our justice system works best when each party has the best possible legal representation. It is especially important when the case involves a truly terrible crime (Boston bombing) or an unpopular issue.

In my misspent youth I worked in law enforcement (until I developed a sense of self worth and got out). I was never comfortable with some of the very young and inexperienced Department of Assigned Council attorneys defending very serious cases. If the society I want to live in is going to sentence a person to long prison terms or even death, I want to make sure that person had the best representation possible.

Here is a great idea for liberals like Corn. If you are ever in need of an attorney make sure you hire an affirmative action law school admit who graduated only because some sense of diversity was more important than ability.

I wonder if the waste basket next to David Corn’s desk is nicknamed “The Corn Hole”?

If holding a job is an unforgivable sin, then I expect David Corn – along with the rest of Mother Jones’ “reporters” and “editors” – to resign and give back all the income they’ve made while working for MJ.

Alinsky Rule #4: Make the enemy live up to its own book of rules.

Omg. First this bombshell about Cruz and now this…

It turns out that when he was 12 years old, Scott Walker had a job sweeping floors and taking out the trash… at a bank. A BIG BANK.

“Tales from David Corn’s Mole: How I malpracticed Journolism™”