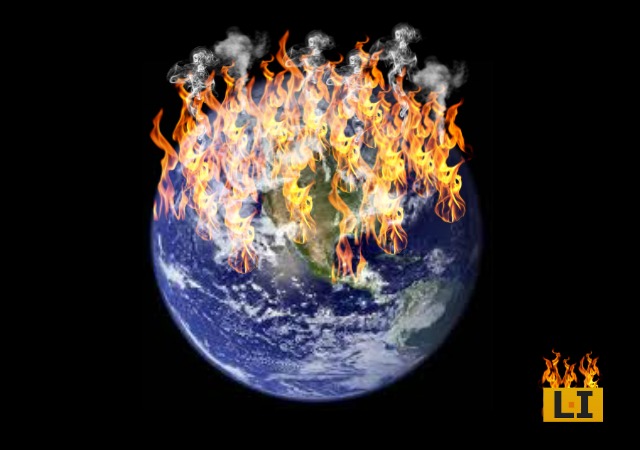 Yes, we have to do this… again. Perpetual media malpractice requires searchable rebuttals to even the dumbest of mistruths, like the latest one about Ted Cruz.

Speaking to the Strafford County Republican Committee in New Hampshire yesterday, Cruz was critical of the administration saying, “the Obama-Clinton foreign policy of leading from behind… the whole world’s on fire!” (managing to slide in a not so subtle Clinton dig).

A little girl named Julia Trant was supposedly frightened by Cruz’s statement and asked mid-speech, “The world is on fire?!” according to Adam Smith, political editor for the Tampa Bay Times, who attended the event.

Ted Cruz literally just scared a little girl in NH. "The world is on fire?!" she asked, repeating his line on Obama-Clinton foreign policy

Senator Cruz took a moment from his speech to assure the little girl that Mommy was taking care of everything, “the world is on fire, yes! Your world is on fire. But you know what? Your mommy’s here and everyone’s here to make sure that the world you grow up in is even better.”

Ted Cruz has two young daughters of his own.

The video was posted by Raw Story with the headline, “Ted Cruz scares the hell out of a terrified little girl in New Hampshire.” CNN, New York Magazine, Bloomberg, Gawker, Salon and others had similar headlines.

Ed Kilgore of Washington Monthly mused that Cruz was using coded language and really meant Obama is the anti-christ or at the very least, one of his minions. Because referencing a “world on fire” is clearly an anti-christ dog whistle. Yes, seriously.

Only he didn’t scare the childen. At least not according to little Julia Trant’s mother.

“She’s actually three, she looked up from my phone that she was playing with and she goes “The world’s on fire?” in a really high question kind of voice… I said to her, “he will be the one that will put that fire out,” and she looked at him as he was a hero… and she was like, “tell him thank you” and then she was like now we can go home. She was quite happy and then she wanted a cookie. There were no tears.”

Secretary of State John Kerry gave a long-winded speech on climate change to the Atlantic Counsel where he said (emphasis added):

What will happen if we do nothing and the climate skeptics are wrong and the delayers are wrong and the people who calculate cost without taking everything into account are wrong? The answer to that is pretty straightforward: utter catastrophe, life as we know it on Earth.

Kerry actually invoked scripture saying, “to leave the planet Earth in better condition than we were handed it, to live up to even scripture which calls on us to protect planet Earth.”

And the media hits for Kerry quite literally using ‘scripture’ saying we’re headed towards utter catastrophe?

Thus concludes this battle. Media suffered an embarrassing loss with a score of -3 (extra points deducted for stupidity of claim and for making it necessary to write things like this) while Facts take home the gold. Again.

Cruz was sending out the secret code phrase, unleashing all us Tealiban to go out and “set the world on fire”.

I tried, but it rained recently. I was only able to manage a high smolder. An earthworm came up and blew it out. Then the first robin of spring ate the earthworm.

I hope PETA doesn’t hear about you allowing the robin to murder that poor defenseless worm. smh

Hell, I slathered that sucker in Grey Poupon after he blew out my smolder.

I burnt my toast this morning. Does that count?

WOW..!! I thought us conservatives were only Wacists, HomoHaters and GenderNon-Equality Boosters…But, Little Girl Frighteners…??!! Alright, that does it, from now on NO MORE MISTER NICE GUY!!

Geez, I’ve already got my boots on the neck of minorities and women, now I have to keep kids scared too? Being a conservative keeps getting harder and harder. What next, puppies?

We didn’t start the fire. It was always burning. Since the world’s been turning.</i.

WRKO has Cruz on at 8:05 this morning. Cruz may or may not be ready for some good old payback. Would love that, would it work?

The most dangerous “DENIERS” aren’t those who doubt AGW; they are the folks who deny that housing loans (and not that secondary domino, financial derivatives) were the cause to our 6+ years of economic downturn. Fannie Mae, Freddie Mac and the FHA held over 57% of all subprime loans when the market collapsed. They are still ailing and so is the economy.

Go to the Teen Literature section of any book store and see what is on the shelves. Once you get past the Vampire Romance novels – it is 90% post apocolyptic facist future. Hunger Games, Divergent, Maze Runner – etc.

Teens have been so overwhelmed by the gloom and doom reports – they see only a bleak future.

Strange, but after I was brought up on British “nasty” classics, and witches and dungeons, and all those muderous people on the rampage, along came the baby-boomers with their muppets, sesame street stuff etc. Now it seems that the pendulam has swung back.

If this CO2 thing is not stopped the earth will be mildly warmer, wetter, and have a longer growing season with even more free plant food in the air (CO2).

Oh wait… was this supposed to be a good thing or a bad thing?