What is right about this picture, and wrong with MSNBC?

Conservative media has come a long way, baby, but has a longer way to go

Posted by William A. Jacobson on September 29, 2013 27 Comments
From The NY Times, the media world has changed:

Ask conservatives what went wrong for them the last time the government shut down, and many of them will bring up the cover of The Daily News of New York from Nov. 16, 1995. Under the block-lettered headline “Cry Baby,” it showed a cartoon of Newt Gingrich, then speaker of the Republican-led House, in tears, clutching a bottle and wearing nothing but a cloth diaper. Back then, Rupert Murdoch’s Fox News Channel was a year from its debut, Andrew Breitbart was a lowly assistant at E! Online, and The Drudge Report was an obscure gossip and news digest sent by e-mail — to the lucky few who had e-mail. But today, a fervent group of conservatives — bloggers, pundits, activists and even members of Congress — is harnessing the power of the Internet, determined to tell the story of the current budget showdown on its terms. 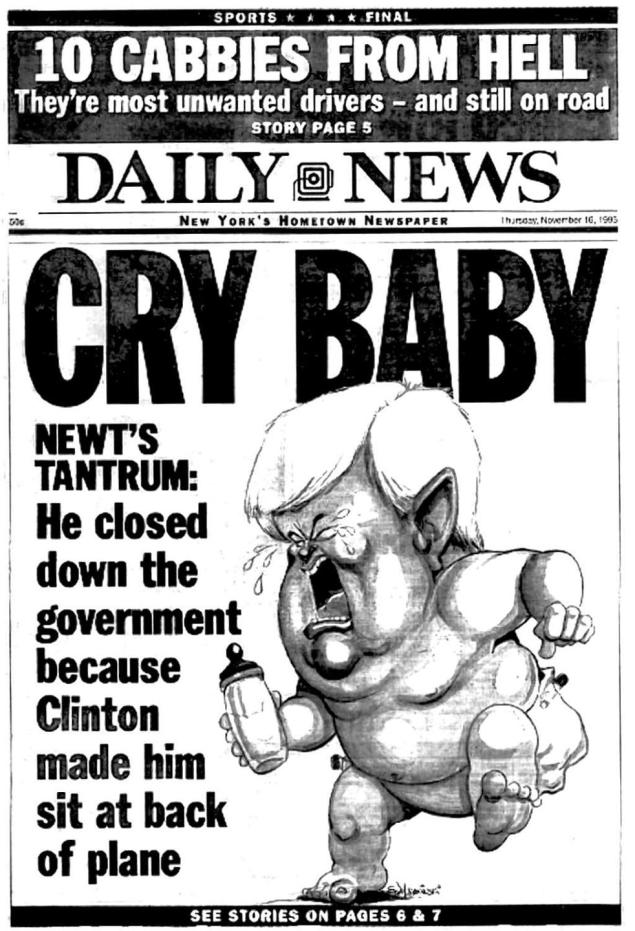 That's true, but only to an extent.  The liberal mainstream media is not the only voice, but it's still the dominant voice.  What power it has lost has been filled by liberal non-mainstream internet media. It's why reporters can collude at a press conference just after four Americans were killed in Benghazi to make sure the appropriate "gotcha" question was asked not of the officials responsible for the safety of our personnel, but of ... Mitt Romney. 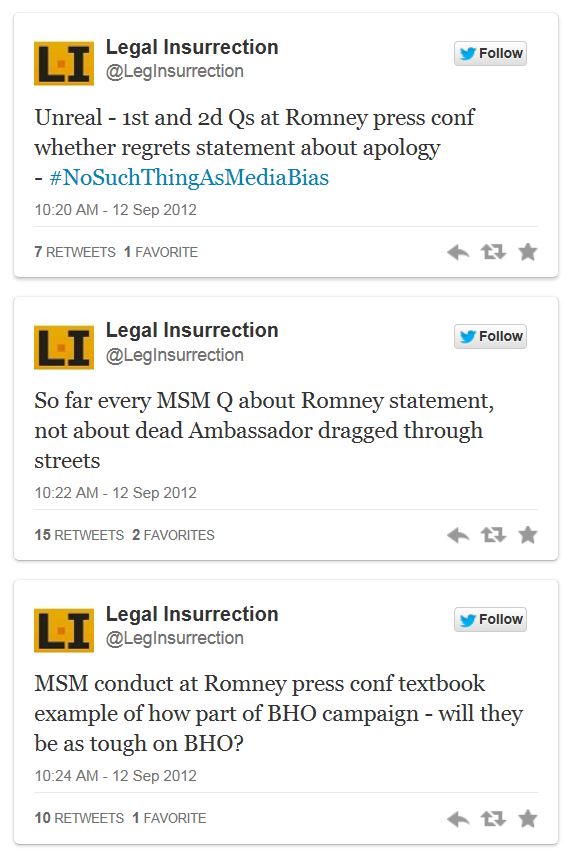 With only a couple of exceptions, no mainstream media reporters were the least bit interested in the utter failure of the Obama administration from Obama on down to address the situation, or to demand an answer as to what Obama was doing that night.  Not the least bit of interest. Instead, we had two days of non-stop all-out Romney bashing from the media.  It was a circus that comes to town whenever an event threatens Obama and the Democrats.
Read More

As noted the other day, Hostess is seeking lidquidation of its operations rather than trying to emerge out of bankruptcy as a going concern because it could not negotiate the union concessions it said it needed. But there may be a White Knight on the Horizon,...

Some amount of firing squad is needed in light of the loss this week of the presidential campaign. Oddly enough, I'm not aiming at Mitt Romney himself. I agree with many commentators who say Romney emerged as a better candidate than expected, someone who came around to articulating...

Yesterday morning—the morning after—I posted this: Barack Obama is the first two-term president in at least 100 years to get fewer votes in his reelection than he did the first time out. (FDR did less well in both his third and fourth terms.) I’d written those words...

There will be a circus, but Allred will not be the ringmaster...

Romney supporters are scared to death of another last minute Rathergate or NY Times document dump...

I really sense that Obama supporters are losing it, completely.  I sense fear in their stupidity. After Big Bird and the contrived "binder" fauxtroversy, they have a new cause:  Tagg Romney threatened to take a swing at Obama when Obama called Tagg's father a liar. Of course,...

I watched the debate without the company of the Web or Twitter, so I was surprised afterward to see the consensus that Romney had wiped the floor with Obama.   I humbly disagree.  He did well.  He didn't do well enough. Last night was a major reason...

I think it was a tremendous victory for Romney at the debate last night.  Usual caveats about there being a month to go, he still may be trailing in some key states, etc. Romney needed to take his case directly to the American people because the media is...

Come on, give us some HEADLINES about MITTMENTUM

Don't expect it, even though there is good polling news today for Romney-Ryan, as detailed at Hot Air: Welcome to October! Today must be Poll Day, as media groups try to determine the lay of the land ahead of the first debate on Wednesday.  The new...

Recently on CNN, Newt Gingrich appeared with Piers Morgan to discuss what Mitt Romney needs to do in order to ensure his campaign's success. The advice was pretty simple: Do to Barack Obama what you did to me. As someone who was in the Newt camp since...

All the details and links at TaxProf Blog. Short version.  He made a lot, and gave a lot to charity. The interesting part: The campaign also released a statement from PriceWaterhouseCoopers on the Romneys’ tax filings over 20 years, from 1990 – 2009: In each year during the entire 20-year...

You remember Julia, the Obama campaign-issued woman who turned to government for help at various life stages.  Those stages aptly were summarized in Iowahawk's Julia's Circle of Life. Julia has come to symbolize the dependency state.  So I wondered what Julia must be thinking about Mitt Romney's...

I thought Romney gave an excellent speech. It had a good mix of soaring rhetoric without veering into Greek columns territory. Clearly the speech was intended to help neutralize the "war on women" theme, and I think it was effective.  I also was glad that the speech...

All you need to know about the media reaction can be summed up in one word:  JournoList. Same players still, just in more influential positions.  But that's for another day, maybe even tomorrow. Tonight I'm going to try not to let the stuck pigs distract me from...

Glimpse inside the Romney/Ryan rally in Waukesha

I attended the Paul Ryan/Mitt Romney rally in Waukesha, WI, this past Sunday evening, where the crowd of nearly 10,000 mirrored other huge turnouts around the country. There was a group of about 15 protesters, organized by SEIU, Obama for America, and MoveOn.org, lining the entrance...