Fraud and hoax Is what several readers posted after their investigation uncovered the identities of the people behind the An October Surprise website.

Turns out the readers were right.  Once the identities were outed, the perps had to confess early: 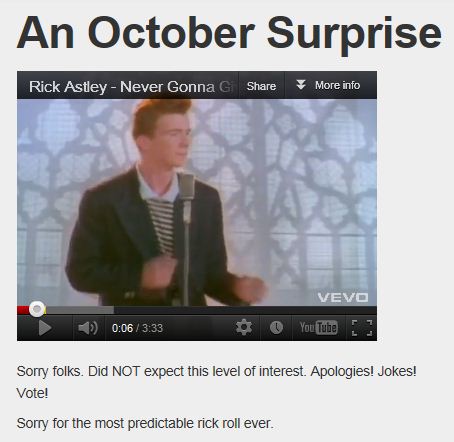 Taking a lead from users at the tech forum Fark.com—who traced the IP addresses of the accounts promoting the page—Politicker tracked down two Web developers who are likely behind the October Surprise site, Jeff Hopwood and Anthony Maro.

The pair have a history of large-scale Internet hoaxes: Their names are connected to a huge prank, for instance, from 2007, when a site promised to  release advanced copies of Radiohead’s “In Rainbows,” instead unleashing on 20,000 subscribers one of the oldest and most infuriating Internet memes: the RickRoll.

As the Fark.com users followed the breadcrumbs that might lead to October Surprise, pages connecting Hopwood and Maro to the 2007 incident disappeared from the Internet. But before long, their LinkedIn accounts were under scrutiny by Politicker, which found that the duo are working as developers at Discovery Communications, the distributor of Discovery Channel and Animal Planet.

But in this fraud and hoax there was a truth — Romney supporters are scared to death of an October surprise, another Dan Rather fake document or NY Times ancient document dump shortly before Election Day.

It will be up to conservative social media to fight the first battle with a speed and vigilance of which even the Romney campaign is not capable.

The speed with which the perps were outed demonstrates that fake October surprises will be more difficult to pull off.  But that doesn’t mean there will not be an attempt.

It’s why I keep saying, fight through the finish line.

Well, I guess it is Treat or Trick month. 😉

World Net Daily thinks the October surprise is a nuclear arms deal with Iran i.e. ” a temporary halt to partial uranium enrichment after which the U.S. will remove many of its sanctions, including those on the Iranian central bank, no later than by the Iranian New Year in March.”

Oh no, a Chamberlan peace in our time moment! That would be an October demise.

I lean toward your attitude that last-minute hanky-panky has gotten so blatant that it could fail this time. IMO an Iran “settlement” is not the only possible October surprise that could backfire.

Too much, too little, too late. People are voting economy, $4 gas and prices going up daily at the grocery trumps Iran.

sigh… I have been RickRolled… you never forget your first time…

Or your first goatse

[…] – October Surprise has a new meaning now. [UPDATE: Trick-or-Treat. The site's owners admit it's a hoax. ] – Chris “Tingles” Matthews, Constitutional Scholar. – We all know jury duty can be […]

It ain’t over until Candy Crowley sings.

[…] – October Surprise has a new meaning now. [UPDATE: Trick-or-Treat. The site's owners admit it's a hoax. ] – Chris “Tingles” Matthews, Constitutional Scholar. – We all know jury duty can be really […]

I truly think there is a God-derived reason for everything. In this instance, we tracked down and identified hoaxers quickly — which confirm we are alert and ready if Team Obama and its minions try anything the next couple of weeks.

I don’t know where Rick Astley may be right now, but I do feel sorry for him, being used like this nowadays.

I feel old.
I sort of like Astley
sigh you whippersnappers

Drudge speculated (via twitter) on Thursday that Gloria Allred is going to pull an “October Surprise” on Mitt Romney. Such a dirty trick worked against Meg Whitman and Herman Cain so perhaps the Dems will try it again. Nothing surprises me with the Dems, but this would truly backfire. And as the Professor says, our fact-checkers will be all over it within 24 hours or less to expose the lies.

That woman cannot get away with it.

Do you think she cares? Gloria Allred is part of the “no such thing as bad publicity” school of ambulance chasers.

it ain’t over until we say it’s over.

Now this is change you can believe in: http://www.youtube.com/watch?v=NN75im_us4k