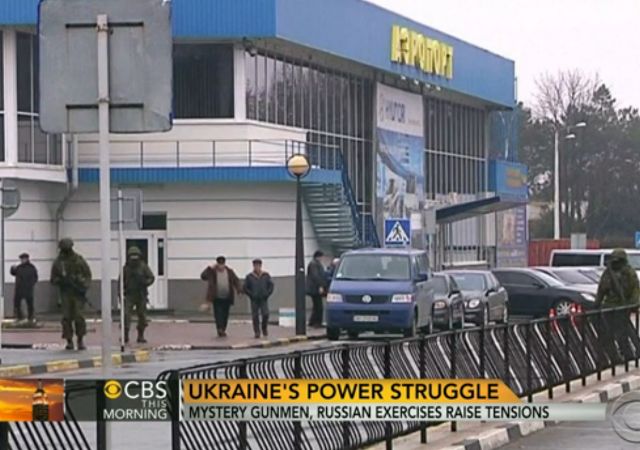 It appears that Putin is getting set to, or already has, sent Russian troops to “protect” Russian-speaking populations in the Crimea after a “request” for help, and will use that pretext to send troops to other Russian speaking regions of Ukraine.

Despite promising that it would not do so (well, except when saying that it might), Moscow just dispatched both conventional military and paramilitary forces to seize control of Crimea’s airspace, its ports, its highways, its television stations, and its regional government.

The vote followed a request from Russian President Vladimir Putin for approval to send Russian troops into Crimea to normalize the political situation there.

Due to the “extraordinary situation in Ukraine,” Putin said, there are threats to the lives of Russian citizens and Russian military personnel based in the southern Crimean region.

“We perceive Russia’s actions as direct aggression towards the sovereignty of Ukraine,” said acting President Oleksandr Turchynov on the official Twitter account of his Fatherland party.

————————
It’s been an eventful day as the crisis in Ukraine continues. (Live coverage at the end of this post).

There have been reports throughout the day that unidentified gunmen had earlier occupied two airports in Ukraine’s Crimea, but officials maintain that the airports remain under Ukrainian control.

A top Ukrainian security official said Friday that two airports in Crimea are under Ukrainian control despite attempts by gunmen to “seize” them.

But Ukraine’s Security Council Chief Andriy Parubiy insisted later Friday that the airports were still under Ukrainian control, according to the Interfax news agency.

Parubiy said the gunmen had set up checkpoints outside the airports. “But de-facto the airports are controlled by the law enforcement bodies of Ukraine.”

Ukraine’s State Border Guard Service said about 30 Russian paratroopers from the 810th brigade of Russia’s Black Sea Fleet had taken up position outside the Ukrainian Coast Guard base in the Sevastopol area. It said the paratroopers said they were there to prevent any weapons at the base from being seized by extremists.

Amid tensions in Crimea, the new Kiev government requested an emergency meeting with the U.N. Security Council, according to Reuters.

Also Friday, ousted president Viktor Yanukovich emerged for a press conference in which he insisted that he remained the legitimate leader of Ukraine.

Speaking from Rostov-on-Don in southern Russia, Yanukovich denied that he had ordered police to fire on demonstrators during recent clashes in Kiev.

Making his first public appearance since his ouster Saturday, Yanukovych said the newly appointed interim government was not legitimate and did not represent the majority of Ukraine’s 45 million citizens. His press conference last more than an hour.

“I intend to continue the fight for the future of Ukraine against those who, with fear and with terror, are attempting to replace the power,” Yanukovych said in Russian, not Ukrainian.

“Nobody has overturned me. I was compelled to leave Ukraine due to a direct threat to my life and my nearest and dearest.”

In his speech, Yanukovych accused the interim authorities in Ukraine of propagating violence. He spoke against a backdrop of Ukraine’s blue and yellow flags before reporters in the Russian city of Rostov-on-Don about 700 miles south of Moscow.

He blamed them for last week’s bloodshed in which dozens of protesters died in clashes with security forces.

“I never gave any orders to shoot,” he said, adding that he sought peace and that the security forces took up arms only when their lives were at risk.

(The Kyiv Post has posted an unofficial translated transcript of the full news conference; it differs slightly from the translation on video).

President Obama also spoke late this afternoon about the situation in Ukraine, where he said that the Ukrainian people deserve the opportunity to determine their own future and warned Russia against any military intervention in Ukraine.

Speaking in the White House Briefing Room, Obama said he is “deeply concerned by reports of military movements taken by the Russian federation inside of Ukraine.” He was apparently referring to reports that armed men, perhaps affiliated with the Russian army, had seized to airports in the Crimea region, a strategically important peninsula with a predominantly ethnic Russian population.

“There will be costs to any military intervention in Ukraine,” Obama said, adding that such a move would  “invite the condemnation of nations around the world.”

You can follow below for updates on social media about Ukraine; you can also follow the #euromaidan, #Kiev and #Crimea hashtags.

That is an overlooked point . There are a lot of Ukrainians in Russia .

With the emotional dismissal of The Berkut , i am not sure Ukraine has the capacity to keep the country together.

But i am liking the ‘Uncontested Arrival’ from the WH . I never would have thought of that .

I think they came up with some of the same kind of clown-jargon for the Georgian incursion, if someone wanted to look that up-

I do remember vividly they referred to the Iranian Green Revolution, with protesters getting shot dead in the street, as “a spirited debate”.

Hey you guys, at least it wasn’t a “kinetic military action”.

Mr. Putin had better becareful because Obama will huff and he puff and he will…

Bingo. I’m reminded of this great column from Mark Steyn on Syria:

Speaking of vernacular .PR Maiden are sounding ( or rather looking on twitter ) panicked.

Will they have to embark with their crossbows & rifles eastwards? A youtube vid posted 22/02 had 3 buses of ‘passengers’ intercepted before dawn in crimea being rounded up & generally humiliated & cowering & crying. Who is who i am not certain. It is obvious more has been going on than kyiv .

Obama supports the Ukrainian people and then acts surprised that Russia invades. Any idiot could have seen this happening a mile away, but Obama planning for the consequences of his decisions apparently acquires too much thought.

Apparently, there is one idiot who missed it.

I see a Branco cartoon in this: Obama in the White House furiously mashing his Russian Reset Button over and over.

I hope Putin realizes he be a messin with a bad ass community organizer up from the get tough or die streets of Chicago who don’t take no shit from nobody.

And her husband too.

I was going to get that one in recently – but yours is the better fit .

However what i did get in was the call to Anonymous re The new banker PM for Ukraine .

And there it is on #ukraine – their post about – this is what you get after a revolution – a world banker. ( paraphrased ) .

I’m so tempted to downvote you for posting only one lyric.

[1] For those whowho don’t know Hyde, at least the rich part of it, is the place that houses the University of Chicago, which, come to think of it has the third largest police force in Illinois to protect it from the poor ( mostly black ) part of Hyde Park. Chicago’s own little neighborhood Apartheid.

So the price Russia will pay is condemnation from Obama. Big whoop. Putin will wear it like a badge of honor.

Ah gee, if only Obama had been president in 1941, we would have avoided all that mean nastiness that came from our having antagonized the Japanese peoples! Think of all the bloodshed that would have been avoided! Our world today would have been so much more peaceful, one world, one Volk!

By the way, there are beatings of alleged opponents of the revolution in Kiev (probably other places, too), street fights across the south-east (except for Kharkov, nobody ever bothers with such things in Kharkov). Flow of refugees from one part to another?

I don’t know about refugees, but I do see a mass exodus of Ukrainians to Siberia sometime in the future.

As much as it hurts, we must give credit where credit is due. Obama has successfully streamlined the process. He doesn’t even pretend to try appeasement and right out of the gate goes straight to surrender.

It hasn’t been mentioned, but any hope to a break through of any kind in the Middle East died yesterday in the Crimea.

Nobody will believe the assurances of the US.

I personally believe this marks the end of NATO.

It should be no surprise, as liberals destroy everything within reach. As President, Obama has a lot of reach.

The whole world, almost, is pulling for Putin. And those are not “Russian troops.” They are operators in Russian SOF unit(s). They appear to be very good at what they do, and they have decisive command structure guiding them. They have executed a long-held plan. Their logistics appear adequate at least. I’d say Ukraine is undergoing partition, with an eastern part, far larger than Crimea, that reverts to Russia and a western part that reverts to something reminscent of the Polish-Luthuanian imperial territory. The east is all Putin can hold, and if he is smart, all he should want.

Remarkable that as leftists dream of centralizing world government/money/tax/bureaucracy, actual world is decentralizing.

I agree — except that at some point Ukraine’s west might further beak up into west and center. It’s not that homogenous either.

Rather than “leftists” I should have used the word domineers.

The Russians are wrong to blame “fascists” for the impulse to self-determinism in western Ukraine. But they are right to claim external self-interested fascist meddling in Ukrainian affairs against Russian interests. Those external fascists are the EU and US bureaucratic regimes, who dream of dominating a single world-wide government.

Putin is evil, but these fascist domineers are far more so. Putin admits to being a strong-man but with morals. These bureaucrat domineers claim preturnatural moral purity and, in any case, immunity from scrutiny and evaluation. Rather like mullahs and clerics.

That I disagree with. The EU and the US have nothing to do with it. Russia is evil, but even then the facts on the ground that favored revolution and civil war weren’t invented by Putin. Ukraine itself failed at free market economy and failed at forging a common national identity.

Is there a part of Kenya that has been French occupied in the past?

I cold swear that Obama has the blood of French generals in him.