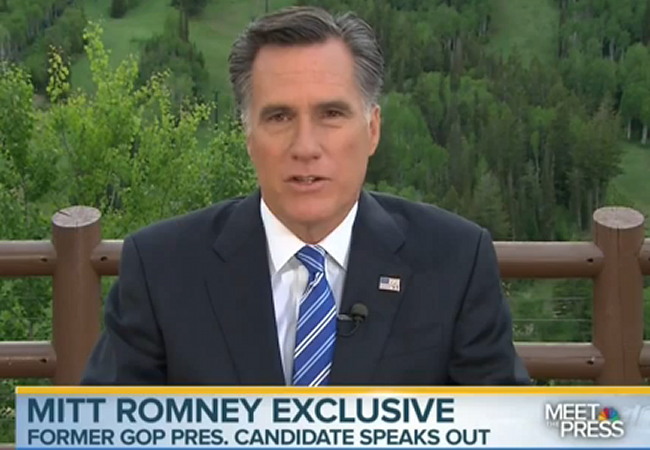 In an appearance on Meet the Press on Sunday, Mitt Romney was asked about the situation in Iraq and laid blame at the feet of President Obama and Hillary Clinton.

Mitt Romney believes the growing problems in Iraq are just the latest example of the Obama administration’s allowing national-security threats grow into larger ones. While the Iraqi government should take most of the blame for the worsening situation, he said, the president and former secretary of state Hillary Clinton did not provide enough support to the country.

Romney seems to have a clearer understanding of the issues surrounding Iraq than anyone in Washington right now and his demeanor is presidential.

Maybe there really is something to that Mittmentum.

Romney is one of those rare candidates that I came to like more as the campaign went on, not less. I sure would prefer him to many of the current GOP favorites. He could call his 2016 campaign the “See, I was RIGHT” tour.

Hardly a day goes by that I do not remark to mysef that this country would be a very different place had more Americans simply exercised themselves to elect that good man.

Not my ideal presidential candidate by any means, but going away better than Pres. ScamWOW.

Name your scandal/debacle/affront to our American values, and there is a 180 degree difference with Romney in office.

How does a good man survive at that level of modern American politics? You’re absolutely damned if you’re moral, principled and have a close relationship with the truth. What the country needs is not what the country will currently tolerate. Hopefully that changes soon. That Obama was reelected is more a sad commentary on the American people than an illustration of Romney’s faults.

A steaming, fetid pile of dog manure would do a better job as POTUS that Barry Soetero is doing.

He should say “I told you so” instead!

Romney’s problem is not, and never was, that he wouldn’t have made a good (or even great) President.

His problem was that he refused to attack Obama’s failed policies.

He thought he could have a nice little gentleman’s campaign where they would be elected based on their merits.

Meanwhile Obama was running the dirtiest, slimiest campaign ads in decades. Everything from ‘Romney killed a woman with cancer by denying her health care’ to ‘Romney never paid taxes’.

Romney refused to attack Obama on his consistently failed record on EVERYTHING. He let all of the scandals and incompetence slide by with barely a whimper.

And that is why he lost, and WILL lose if he runs against Hillary. She will crank the Democratic slime machine up to 11.

Romney did attack Obama on the issues but at every chance, the MSM hit back.

The debates for one including the Candy Crawley moderator
attacks where she actually became the second debater against Romney.

Romney speaks about Benghazi and called down by Candy Crawley and later when too late a weak walk back by her.

Those who sat at home or voted third party are at fault for Obama’s presidency.

Obviously knowing what his first 4 years gave us and knowing he was going to continue ,his Executive Orders especially with amnesty as he did in 2012
and his disasters in every part of the world, enabling
Radical Islam to spread and take over.

The Romney haters obviously loved Benghazi and looking forward to more from Obama.

You and Joe Scarborough. I suspect Massachusetts Chrome might fade in the stretch. “Mittmentum” is really embarrassing. I’d vote for him as a duty, to be sure.

In hindsight, I’m just not convinced Iraq was or is fixable. Kipling warned us about things like this.

“His demeanor is presidential’ huh? What is his political philosophy! Where does he stand on important issues?

Amazing you can say something so entirely vapid, Aleister, given the problems facing America today. Did you know that the LSM said Kerry looked presidential, too? I guess not.

We don’t want vapid and meaningless symbolism and superficiality, Aleister. We want someone with a heartfelt and core philosophy that will reduce government, restore fiscal and social sanity, and rein in a judiciary that is imposing cultural choices by judicial fiat.

Romney flip flops so much I doubt he knows what he believes.

Had Romney’s convictions been less flexible, and had he been willing to take the fight to Obama, he would have been president.

That he isn’t was his fault, not ours.

That Obama is president today is Romney’s fault.

No, the fault are those who sat at home or voted third party.

You know what Obama did the first 4 years and knew it would only get worse, that is who the whiners chose rather than the adult Romney

That it was the voters’ fault is always a loser’s excuse. If you can’t get your voters out, you lose, simple as that. The GOP lost in just that way. But it was the fault of the GOP and Romney, not the voters.

The GOP should also be blamed for not challenging a whole bunch of crystal-clear voting fraud.

Romney ignored the base and set out to win “independents”. By the time his head stopped spinning from pandering, he had no idea which way was right or left, not that he was ever a man of the Right. After all, Romney was the man who bragged that the only Republican thing about him was the R after his name.

We had a choice of two liars. You blame the Conservative base for refusing to vote for another liar? All Romney had to do was assert a set of principles and stick to them. He could not do that. Therefore, folks concluded he had none.

He told the truth before and during the campaign, and the media called it a “gaffe”. He has a successful foreign trip, and the media reported it as a failure.

The MSM is still too powerful, and it learns from its mistakes. Nor does it really care about money.