“…he’s had a better two years than most presidents that you can name.” 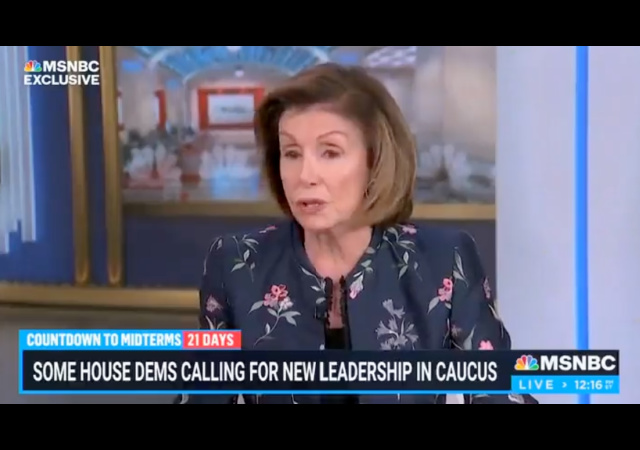 House Speaker Nancy Pelosi said President Biden “has done a spectacular job—he’s had a better two years than most presidents that you can name.”

PELOSI: "President Biden—who has done a spectacular job—he's had a better two years than most presidents that you can name." pic.twitter.com/DffGv8gyYE

He’s had a good two years if you exclude inflation, the border crisis, oil production, memory loss, Afghanistan, the fentanyl crisis, and hateful rhetoric against half the population of the United States.

She also doesn’t believe the polls saying, “The NYT poll is an outlier poll.”

Pelosi: "The NYT poll is an outlier poll, you just cite one poll, all the other polls have a different-"

Pelosi: "It was an outlier. It wasn’t that big a sample. So I dismiss that." pic.twitter.com/gIrns7sSLj

Speaker Pelosi and the left continue to push abortion as a top concern, even though most polls tell a different story.

Democrats know that our freedoms are at stake. Our candidates are ready to enshrine Roe, defend our Democracy and keep lowering costs for working families.

Republicans have endless dark money from interests who want even more high end tax cuts – but we’ll have enough to win! -NP pic.twitter.com/oCrcNO3D3p

Someone should share with Pelosi the latest POLITICO/Morning Consult poll, “more than 90 percent of voters are concerned about the U.S. economy and inflation.”

I agree with the “spectacular” part.

So does the Taliban

For a dictatorship, he has for a representative republic not so much.

And then she woke up after a severe drinking bout (don’t mix Botox with alcohol, Nan!!)

Where in heck does the think the Dems have “lowered costs for working families?”

Costs of an abortion?

Hard left radical lefties are largely pleased with the job Biden has done to help destroy ‘fundamentally transform’ the country.

What they are displeased with is he didn’t go far enough and did not manage to avoid blame for the negative impact on the peasants. Who can still — unfortunately in their eyes — vote them out of power in many parts of country.

The d/prog will, again, fail to do any realistic assessment or self examination of their electoral fortunes. Instead they will blame their base for not voting, blame that failure to show up on evil r messaging financed via dark$.

I guess if you drink enough…

Dear ole Nancy should be forced to actually live and work out of her district in San Francisco. She needs a street-level office with a floor-to-ceiling window in the Tenderloin or SOMA so she can see and be seen by the drug-crimes and sex crimes her corruption perpetuates. She should be forced to use that city’s atrociously dangerous BART and transit system without her security team surrounding her. She should be forced to walk to lunch in the Financial District and be confronted by the medieval filth she has created in that city.

Nasty is not blind, stupid or drunk. The Left has been very successful rolling out their agenda these last two years and they see no significant pushback from the GOP..

They know there are at least 20% of voters who will vote for Dems no matter what atrocities they commit , and they are confident they own the electoral apparatus in enough critical blue cities to swing the national vote their way.

The elite are not blind to the effects of their policies at all… but you are insane if you think they care about the effects on us peasants.

A patient, Uncle Sam, shows Dr Nancy his infected, pus-filled arms and legs with sepsis spreading throughout his body. Complains of pain and fever. Can’t function. Body is about to shut down.

“Have you been taking Biden’s Little Liver Pills as you were prescribed?

Dr Nancy smiles, “Okay, then. Don’t worry! You are in good health. You look fine—Spectacular even.”

Peabody is correct, circle gets the square!

Her penchant for bald-faced lying like this is what makes this hag a complete and utter joke. Nobody takes this dumb slut seriously.

I have zero qualms about wishing this repulsive old shrew would shuffle off this mortal coil. This disgusting, worthless hag is everything that is wrong with our society to the nth power.

Pervert Pedo Joe is doing a spectacular job – of tearing down this country. That’s their intent, and they don’t give a damn as long as they’re living high on the hog.

She went on to say that the sky was a beautiful shade of chartreuse today.

So she’s literally drunk *all* the time.

Nancy needs to avail herself of mental health services in DC. They too offer a ‘ten step’ program.

It will never work for her. “Ten Steps” involves acknowledging a higher power exists, which I suppose to her is the Federal Government. But the others require things we know she won’t do:

– Make a list of persons we have harmed, and became willing to make amends to them all. (it’s a long list)
– Continue to take personal inventory and when we are wrong, promptly admit it. (this will never happen, but there is a minuscule possibility that when she is no longer drunk with power that she will be redeemed.)

Rare video of Pelosi, partying down with The View gang:

‘Spectacular’ in a sentence: “That’s a spectacular fire at the oil refinery.”

The only thing that pedophile has done a spectacular job at is destroying the American economy.

Look at the hell she put democracy through with her power and vindictive nature during the Trump presidency. She poisoned every aspect of the government ,incited every investigation to impede progress and insure Trump was the single largest villain in the eyes of the media, the nation and the world. We may win some elections but this witch has single-handedly destroyed the civil workings of this county and soured the perception of many of it’s citizens.

Don’t forget that she also got rich while doing this as well.

every single GOP candidate needs to use that in their ads.

President Biden has, in fact, done a “spectacular” job. Madam Speaker did not say “fantastic” at what/

I’m so old, I remember the administration of President Wreck-It Ralph.
And in only two years, Joe has pushed him down to the runner-up position.

Nancy knows she is gone after she wins in November. She will resign and one of her relatives will win the election to fill her seat. In California with Newsom as Gov and her Nephew it is all planned. Nancy still has to keep the MSM charge going but they all know it is garbage. The only way the Dems win is through cheating and if they do it like 2020 it will likely lead to CW2.

“…he’s had a better two years than most presidents that you can name.”
Other than Garfield, Taylor, and Harrison, exactly who?

Hopefully, there’s a special place in hell for the likes of Pelosi.

7th Circle – along with pedophiles and people who talk at the theatre.

Well, if “spectacular” is an airliner crashing into a nuclear power plant, and “better” is measured against Harrison dying after about a month in office,…then yeah, maybe.