Report: Biden Admin Pushed Democratic El Paso Mayor Not to Declare State of Emergency Over the Border to Save Face

Report: Biden Admin Pushed Democratic El Paso Mayor Not to Declare State of Emergency Over the Border to Save Face

“The White House has asked, at this point, for us not to do that and they’ll continue to work with us and continue to give us … money through [the] Federal Emergency Management Agency.” 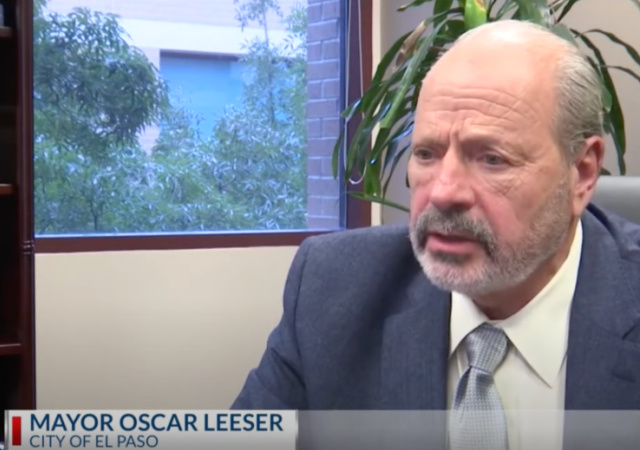 The New York Post learned that President Joe Biden’s administration told El Paso Mayor Oscar Leeser, a Democrat, not to issue a declaration of emergency over the border crisis because it would make the administration look bad.

Just in time for midterms!

Reports indicate El Paso sees 2,100 migrants arriving every day. He has bussed illegal immigrants to sanctuary cities, but the media mostly ignores him and attacks Republican officials who do the same thing.

At least three of the El Paso City Council’s eight members have urged Mayor Oscar Leeser to issue an emergency declaration in response to the thousands of migrants who’ve filled the city’s shelters and are being housed in local hotels, sources familiar with the matter said.

But Leeser admitted during a private phone conversation last month that he’d been directed otherwise by the Biden administration, one of the officials told The Post.

“He told me the White House asked him not to,” Councilmember Claudia Rodriguez said.

Rodriguez also said Leeser has repeatedly assured her that he’d declare a state of emergency “if things got worse” — without saying what that meant.

At a Sept. 27 City Council meeting, Mayor Leeser also addressed the issue, saying Congresswoman Veronica Escobar (D-Texas) had urged him not to declare a State of Emergency, adding: “The White House has asked, at this point, for us not to do that and they’ll continue to work with us and continue to give us … money through [the] Federal Emergency Management Agency.”

“It is a sleight of hand what the administration is doing — pressuring the local government to not issue a declaration of emergency, to say as if everything is going OK,” he said.

Gonzales also alleged that the White House has done “the same thing in other parts of my district,” which have also seen huge numbers of migrants seeking refuge.

Leeser has not issued a declaration of emergency. Officials extended the emergency ordinance, which “allows the city of El Paso to continue responding to the ongoing migrant crisis by assisting non-governmental organizations, helping at food banks and welcome centers.” The city is also “chartering nine to 14 buses a day.”

El Paso might stop bussing illegal immigrants only to comply with Biden’s announcement that “Venezuelans could be kicked out of the country under the Trump-era Title 42 rules.”

Biden seems to be establishing a pattern of bribery, threats and extortion to maintain power.

This is how they do it, and have for a long time, way before and beyond Grope-y Joe. Anybody remember Fundamentally Change-guy’s bid to fund the SEIU for govt outreach? Mint another cohort who gotta keep the Patronage flowing.

The flip side is, if you’re not in; you’re out. The Government Motors takeover protected the blue collar pension fund, while letting the white collar GM union’s pensions get clobbered.

Blade Runner got it: “If you’re not cop, you’re little people.”

You know the saying: “If you don’t see the mark at the poker table; the mark is you.”

The sooner we realize that we’re living in a techno-dystopian noir of grift and graft, the better for us.

Remember what he did to the Ukrainian prosecutor investigating Burisma?
Bribery, threats, and extortion. With our money.

So what was the quid for Brandon’s quo?

Lesser ran as an old school conservativish d. El Paso had been rocked with a decade + of mismanagement in city govt scandals as well as having the schools taken over by the State from a testing/funding/attendance scandal. Other scandals re new conference center that had the big money in EP wanting to use eminent domain to wreck historic neighborhoods for construction. Others as well.

Into that stepped Leeser. His pitch essentially was he’s a successful business owner and would bring that experience to reform and oversee city govt. Since election he’s been a typical hack. Not much delivery or teeth in solving issues. He’s a good salesman, owns dealership, but never seems to deliver on his rhetoric.

Basically the dude is a rino who ran as d/prog in a deep blue city. Neither he nor the rest of El Paso leadership bias the stones to root out and fix the structural problems. Too many bodies buried and an interconnected web among the elite/leadership class in EP who all know where each other’s bodies are. I was happy to move back to Bama.

thought fema was originally created to respond to NATURAL disasters–the immigration flood at over 2,000 per day is not a natural disaster at all but rather one created by a policy disaster, within our control to manage and respond

Catastrophic Anthropogenic Immigration Reform (CAIR) with “benefits”. That said, it’s encouraging to learn that the political consensus is a minority conception.

I strongly object to you word choice of “immigrants.”

These individuals are illegal ALIENS!

I strongly object to you word choice of “illegal ALIENS!”

These individuals are INVADERS!
by definition

Why is anyone suprised at this? It is exactly the kind of thing the immoral pedophile in the White House is known for.

Fundamentally, is the larger government the controlling voice of the volk directing smaller chunks as administrative sub-units, or is it a collective instrument of common interest; the active arm of essentially a co op?

Biden, the embodiment of the nation as a people, seeing their destiny clearer, directs the districts to implement the grander glorious future. Be the change you want to see. The rest of us he directs from a podium in black and red, as revealed voices of the people, ahead of what the people think they want, did before him.

Inconvenient when you have to remind those little sub-mandarins to get in line.