While President Biden calls his withdrawal as an “extraordinary success,” the reality on the ground tells a different story. 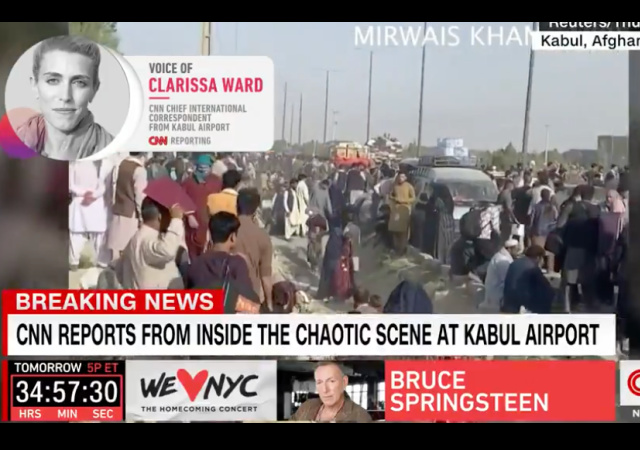 As the world marks one year since President Joe Biden’s botched Afghanistan withdrawal, the Taliban-ruled country has become a safe haven for global jihad terrorism and a hellhole for its forty million people.

On This Day: Taliban Marches on Kabul, Biden Admin Begs Them to Spare U.S. Embassy

As we were reporting live on this day an year ago, the Taliban forces had swept through most of Afghanistan and were on the outskirts of capital Kabul. “The rapid collapse of Afghan government forces in face of Taliban offensive appears to have come as a surprise to President Biden and his team,” we noted. A day earlier, “the Biden White House presented a last-minute scramble to evacuate U.S. diplomats and service personnel.”

To add further insult to the injury, the Biden administration begged the advancing Taliban to spare the U.S. embassy.

Later that day we reported that the “Kabul airport is now closed to commercial flights as evacuation are underway.” What ensued was a chaos, with a jihadist suicide bomber killing 11 marine, a U.S. Army soldier, and a Navy medic. Some 200 Afghans also lost their lives in the attack.

While President Biden describes his withdrawal as an “extraordinary success,” the reality on the ground tells a very different story.

Afghanistan “could once again become a base for international terrorist attacks after the withdrawal of US and Nato troops last year,” a United Nations report noted in June 2022. Al-Qaida, the Taliban’s critical ideological ally, is operating under the protection of the new regime and enjoys an “increased freedom of action,” the report found.

The Taliban-held country is infested with foreign jihadi outfits of all shades. “International concern is building over the presence of al-Qaida, IS and ‘many other terrorist groups and fighters on Afghan soil,'” German broadcaster DW News wrote, citing the UN report.

As the Taliban took over the country, al-Qaida renewed its call for global jihad. The Taliban’s “victory demonstrates what the Islamic nation is capable of when it unites (and) proves that the way of jihad is the only way,” al-Qaida said in a statement in September 2021, weeks after the Taliban declared victory in Afghanistan. “It’s time for you to prepare for the next stage of the struggle,” the terrorist group declared.

The Taliban began its rule by freeing thousands of high-value al Qaeda and ISIS terrorists who, until Biden’s withdrawal, were in U.S. and Afghan custody. That should be no surprise since former Guantanamo Bay inmates now hold top posts in the Taliban’s “Islamic Emirate.”

Around 5,000 top terrorists fled when Afghan government forces surrendered Bagram Air Base, 40 miles from Kabul. The prison at the base housed some of the world’s most notorious jihadis besides the Guantanamo Bay terrorist detention center.

“Afghan forces at Bagram Air Base, home to a prison housing 5,000 inmates, surrendered to the Taliban, according to Bagram district chief Darwaish Raufi,” The Associated Press reported on Monday.

“The prison at the former U.S. base held both Taliban and Islamic State group fighters.” The Taliban released thousands more from the National Detention Facility in Kabul, the BBC and other media outlets reported.

Afghan women have been thrown out of workplaces, and girls have been denied education. Hunger-stricken families are forced to “sell young daughters into marriage,” the newspaper The Australian reported in October 2021.

As Legal Insurrection reported in November 2021, Taliban death squads were hunting down gays, former officials, and opponents of the regime.

The Biden administration, which flew the gay pride flag over the U.S. Embassy in Kabul before the Taliban takeover, focused on imposing “preferred pronouns” at home as the Taliban rounded up Afghan gays. “We now know for sure the Taliban has a ‘kill list’ circulating, identifying LBTQI+ persons,” the French public broadcaster France24 reported.

With the Taliban, the Islamic Sharia Law has returned to Afghanistan with a vengeance, with public hangings and deadly attacks on the country’s remaining religious minorities, namely Hindus and Sikhs.

Those beheaded under the Taliban’s Sharia Law were boys as young as 9 and 10. According to Islamic law, beading is a sanctioned punishment for non-believers and those branded as enemies of Islam.

“No one will tell us what our laws should be. We will follow Islam and we will make our laws on the Quran,” Taliban’s co-founder Mullah Nooruddin Turabi said weeks after taking power. “Cutting off of hands is very necessary for security,” the one-eyed, one-legged Mullah declared.

NBC News, on Monday, summed up the Taliban’s one-year rule:

The group had decimated protections for those suffering domestic violence, detained women and girls for minor violations, and contributed to a surge in child marriages, the report said, adding that it had reneged on promises to allow women to continue to work and girls to continue their education. Some of those protesting against the restrictions had been tortured and abused, it said.

The country of nearly 40 million faces hunger and destitution. “Almost 20 million people – half the population – are suffering either level-3 “crisis” or level-4 “emergency” levels of food insecurity under the assessment system of the World Food Programme (WFP),” a human rights group noted last week.

Anybody stupid enough to actually believe that the freaking TALIBAN were going to let women have freedom to work or continue to go to school is too stupid to ever be listened to on any foreign policy matter ever again.

And Obama’s premature evacuation from Iraq that was a segue to the second Iraq war and World War Spring (WWS) series. Catastrophic Anthropogenic Climate Change.

Not defending Biden, but the Afghanistan withdrawal was going to be a shit show no matter who was in charge or when it happened.

Well, putting that retarded pedophile in charge guaranteed it couldn’t possibly get worse.

Yep, that was the day that even the dumbest, least informed idiot that voted for the pedophile realized just how bad they f*cked up.