The election is in three weeks. Yes, releasing the oil is politically motivated. 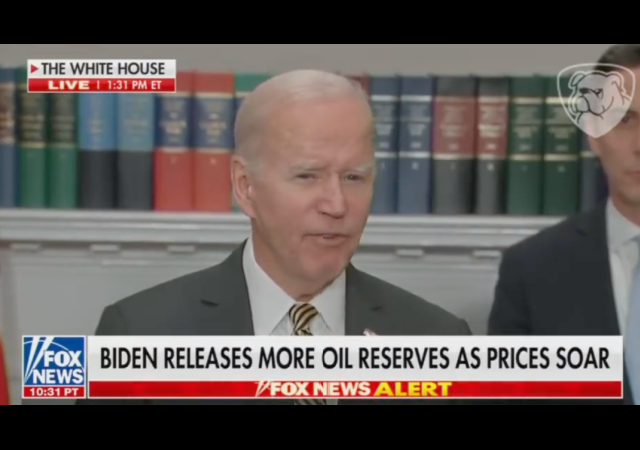 We’re not stupid, President Joe Biden, no matter what the man behind the curtain tells you.

Biden’s speech announcing the release of 10 to 15 million barrels of oil from the strategic reserve hit all the hyper talking points:

But the mask fell when a reporter asked Biden if the midterms motivated him to release the oil since the midterms are in three weeks.

The question makes sense because gas prices are rising again. The West is setting new records.

Reporter: "Is it politically motivated" to release the Strategic Petroleum reserve before the midterms?

Biden: "Not at all. It's motivated to make sure that I continue to push what I've been pushing on." pic.twitter.com/a09lOuJmaz

He gets so testy when taken off script:

REPORTER 1: “what is your response to Republicans who say you are only doing this SPR release to help Democrats in the midterms?”
BIDEN: “Where have they been in the last four months? That’s my response.”
REPORTER 2: “Is it politically motivated, sir –” [crosstalk]
BIDEN: “No, it’s not.”
REPORTER 2: “– three weeks before the midterms.”
BIDEN: “Look, it makes sense because I’ve been doing this for how long now? It’s not politically motivated at all.”

“No, it’s not,” Biden said, sounding irritated. “Look, it makes sense. I’ve been doing this for how long now? It’s not politically motivated at all. It’s motivated to make sure that I continue to push on what I’ve been pushing on. And that is making sure there’s enough oil that’s being pumped by the companies so that we have the ability to be able to produce enough gas that we need here at home, oil we need here at home, and the same time, keep moving in the direction of providing for alternative energy. That’s what I’ve been doing. Now, the problem is these guys were asleep, I don’t know where they have been, and they seem – the price at the pump should reflect what the price of a barrel of oil costs, and it’s not going down consistently.”

So many lies. Biden thinks we believe him when he says his administration has never stopped oil production in America. It’s the greedy oil companies.

He told the oil companies to invest in America. Well, they could, if you allowed them, Biden:

BIDEN: “My message to the American energy companies is this: You should not be using your profits to buy back stock or for dividends, not now, not while a war is raging. You should be using these record-breaking profits to increase production and refining. Invest in America for the American people, bring down the price you charge at the pump to reflect what you pay for the product.”

Joe Biden laughably tries to claim that his administration has not stopped or slowed domestic oil production:

This, of course, is false. pic.twitter.com/Qvd9S1Q9gO

Joe Biden canceled the Keystone XL pipeline and halted all oil and gas leases on federal lands in just his first week in office.

He reversed our energy independence and all he can do now is lie. https://t.co/dUEgNC3iMi

Biden: "Let's debunk some miss here, my administration has not stopped or slowed U.S. oil production."

“While a war is waging.”

"You can increase oil and gas production now while still moving full speed ahead to accelerate our transition to clean energy."

Putin, Putin, Marsha. Progressive prices (PP) are Biden’s choice from regulatory excess to coups without borders to redistributive carbohydrates to Green blights upon the land and sea.

There’s no fool like an old fool, particularly when they have dementia.

He’s lying even when his lips aren’t moving.

The Big Guy’s as addicted to dipping oil as his cokehead son is to bipping cocaine.

“I’ve done everything in my power, blah, blah, blah.” It’s obvious the buck doesn’t stop anywhere near the Oval Orifice.

Even when he wets the bed, it’s not his fault if the sheets are soaked.

Someone needs to needle him a bit like Tom Cruz vs Jack Nicholson. I can totally see him yelling Yes I did it to get Democrats elected. We have to crush the Republicans and save our democracy. You need me releasing that oil. You can’t handle the oil reserve!

Not politically motivated? I’ll have further comment when I stop laughing.

I’m sure it’s not entirely politically motivated. The Biden crime family has been well compensated by the CHICOMs (including “10% for the big guy” according to Hunter) to destroy America from within. The SPR is for national emergencies, primarily for war. As it approaches empty could the U.S. even confront China if our ships our bobbing around the Pacific on empty with not fuel to even keep the keels down in rough weather

Biden had a You-Reek-ya moment in his shower (with Ashley) about oil displacement much as Archimedes had centuries before about water in his tub.

But, by gum, he’s gonna do it anyway

Wait and see what happens to the price when they stop releasing from the reserve. A million bpd added or subtracted is enough to move markets significantly.

If clean energy is a reason to tap the reserves, it seems to me that restarting the pipelines and drilling would give us so much more!

Not unless they are Russian owned….

Three hundred years from now kids will read about Biden and his mismanagement in a history text and react just as I did when I read stories of political events of the 1600s, bewilderment.
How could those people have been so blind, so oblivious to their surroundings?
I know how and why now.

Yes, but they’ll be reading about it in Chinese. And the texts won’t have anything like the spin you’re putting on the Biden betrayal.

Right … we’re supposed to believe that it’s not political when everything is political with the communists. Now, IF the Saudis had given him his quid-pro-quo then he wouldn’t have needed to steal even more oil from the SPR to buy votes for his failed policies. But they didn’t and he needs to try to do SOMETHING to keep the prices under $4 for the next 3 weeks.

Alzheimer aside, this man is a completely piece of sh*t: a traitor, a thief, an embezzler and a cause of as much present and future misery as any evil person in history. His wife is awash in the same sewage.

Stop sugarcoating the truth, will ya? 😉

Little known fact – a good sized portion of the oil in the SPR belongs to Australia.

Did Biden ask them before he ‘borrowed’ it or gave it away?