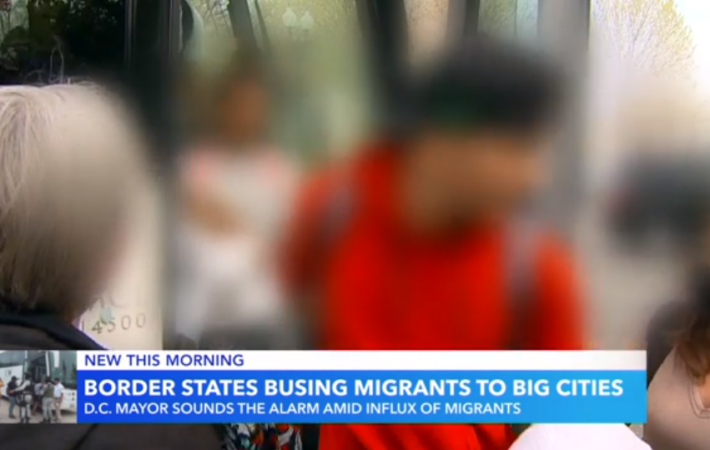 Between two and five million illegal aliens have entered the U.S. since Joe “I am the Democratic Party” Biden took office. The Democrats’ radical open border policies have been a disaster not only for national security but for the border states suffering under this huge influx of illegals.

Of course, the Biden administration is still peddling the clear lie that the “border is secure.”  Even Democrat propagandist puppet Chuck Todd seemed nonplussed when Kamala Harris made that claim.

Even @ChuckTodd befuddled. To VP Kamala Harris: “We’re going to have two million people cross this border for the first ever. You’re confident this border is secure?” #MTP pic.twitter.com/b6Dcloj7dp

Throughout President Trump’s administration, the focus was on “kids in cages” and the inhumane conditions for housing illegals. When it was pointed out that Biden did the same thing (and worse), the press was Orwellian mute.  Leftist Twitter was silent.

Footage of the Biden Cages inside the Donna, Texas DHS facility where kids are packed inside.

What the Biden administration is doing is inhumane and unconscionable. But worst of all, it was preventable. pic.twitter.com/Z1vf3hLyTR

Obviously, the attacks on Trump’s border policies were about politics not some goodwill for illegal aliens, why else the silence on the same or worse treatment by the Biden administration?

On top of that, radical leftist mayors and governors rushed to declare themselves “sanctuaries” for illegals. Come to our city, our state, we love us some illegal aliens . . . unlike those bad Republicans. And stuff.

While border state governors like Texas Gov. Abbott are receiving credit for busing illegals to these smugly self-declared sanctuary cities and states, President Trump was the first to argue for this move, and it was brilliant. It’s as brilliant now that it’s being enacted by these governors, of course, but it’s important to note that this was Trump’s idea originally.  Make them fulfill their own empty, virtue-signalling promises, make them live by their own rules. Genius.

So we’ve seen the disgust with which these elitist phonies regard not only “border towns” but the illegals themselves. Asking for National Guard to address “the problem,” declaring states of emergency, and busing illegals out of their “sanctuary cities” to the suburbs without bothering to notify the relevant city officials are all par for the Democrats’ hypocritical course.

Remember, too, we are talking about a tiny fraction of the Biden open borders’ influx of illegals, and these shining examples of progressive goodness have completely fallen apart and revealed that it was all just talk, a cynical political ploy to attack political opponents.

Good Morning America did a segment on the horrific circumstance of border state governors sending a few busloads of illegals to DC. Mayor Bowser is outraged, her city council is outraged. How can this happen?! How can illegals be “flooding”—again, barely a trickle compared to the millions actually surging across our Southern border—their tolerant, diverse, and open-armed progressive utopias? It must be stopped! It’s an abomination!

DC Council Member @BrianneKNadeau blamed the governors of Texas and Arizona for creating this "crisis" and said they turned DC into a border town. pic.twitter.com/fgPkOrUdQi

Here’s GMA’s segment on the horrors of a few busloads of illegals inflicted on DC by those bad and fascist and probably evil Republican governors.

The Mayor of Washington, D.C. declares a state of emergency as the city faces a flood of migrants. @maryaliceparks has the latest.https://t.co/kGjrnP2J4s pic.twitter.com/YoPy2un76j

Whatever happened to pontificating at everyone about the Statue of Liberty and "give your poor" poems?

Take them to Delaware, Martha’s Vineyard,and The Hamptons next

Sounds like DC just doesn't want them in their city.. Racists

Because a bunch of that emergency money will go to grift, directly to the pols.

Illegals have been being bussed into CA for decades now. Here’s an article of an Orange County city blocking them in 2010:

Most of the illegals and homeless in CA are from out-of-state. Illegals, mostly from Texas and Arizona. So we know how it feels to be the dumping ground. But our government welcomes them and hey, it’s only taxpayer money so they can spend all they want being nice to cheap labor. They would do the slavery thing again if they could get away with it but that is what China, India and much of southeast Asia specialize in. We’ve become addicted to slavery in this country.

I thought diversity was their strength? What the hell did they think’s going on on the border with Millions have already crossed this year alone they’ve had a few dozen

“I thought diversity was their strength?”

Yeah, like homogeneous steel is so passe. Now they mix iron and clay and it works just fine.

Every local TV news station is running a series on the crisis in affordable housing. Well the Democrats just imported 5 million more poor people. The crisis is 5 million people deeper.

Biden: illegal alien invasions are just an “idea,” much like pantifa.

No harm done, nothing to see here.

Pack them off to Delaware.

He needs to pass that little snippet on to Mayor Bow-Wow. Evidently she didn’t get the memo. Easy to pontificate when you’re safely up in DC with the Border Czar as 2 clueless bimbos and say that the border state governors should stop whining until the Prince (Biden) sends the rats out to put the glass slipper on your foot!! Your toes must be getting cramped, Madam Mayor!

What happened to send us your poor huddled masses. You’ll need to tell all the lazy scum to get to work or the Hatians and Hondurans and Ukrainians are here to work and kick your worhless ass to the street.

Where is the virtue signaling on migration? Texas should double the quota, although sending them to crime ridden DC is not very humane.

I would like to see some of the other border states such as Arizona join the party. The more the merrier.

“Give me your tired, your poor, your huddled masses yearning to breathe free, the wretched refuse of your teeming shore. Send these, the homeless, tempest-tost to me…”

“When in danger or in doubt /
Run in circles, scream. and shout!”

“President Trump was the first to argue for this move, and it was brilliant.”

And that was back in 2019.
I’ve complained before about how people of the caliber of those on this list can home in on “tinfoil hat” TRUTH in about two weeks – truth that takes the government and the DSM 12-18 months to finally and inevitably admit.
But look at this fact from another angle and it is hopeful:

“The feds’ OODA loop is so slow that a suitably inspired political resistance with a string of Grand Canyon mules could get instead of and stay inside it.”

I don’t understand. They’re getting exactly what they said they wanted, They should be extremely happy.

Like most socialists, it is all fun until they have to spend their own money, or their policies directly affect them.

I know of a beautiful 14-acre plot on Martha’s Vineyard that would make a great refugee camp.

There is a compound in Hyannis that isn’t used much.

Let’s take the low number, 2,000,000. We have 435 House districts nationwide, with the best equal representation by population, right? Two mil divided by 435 is nearly 4600 new residents per district just from over the SOUTHERN border, Spread equally as we could. New York city has what, 16 districts? Looks like it. Boom, you get around 74,000 new residents. Chicago? About 11. Boom. 50,000 new friends. NOW you are talking a crisis.. and being a tad more fair and honest while your at it.

Bonus residents if you are a Sanctuary city. Adjust the numbers as our new resident roll call increases

Revoke that foolish charter, Home Fool has been a mistake since the inception of the notion. The DC “council” will declare an emergency over a weather forecast, clogged toilet or criticism over the shadow delegate’s outlandish parking paradigm.

Remand the District to military governance under the auspices of congress. Do it for the children.

Question for Mayor Bowwowser: Do you like your crow rare, medium, or well done?
.