The AP steps up to help flailing Biden admin, tells staffers not to use the word “crisis” when writing about the border crisis

The AP steps up to help flailing Biden admin, tells staffers not to use the word “crisis” when writing about the border crisis 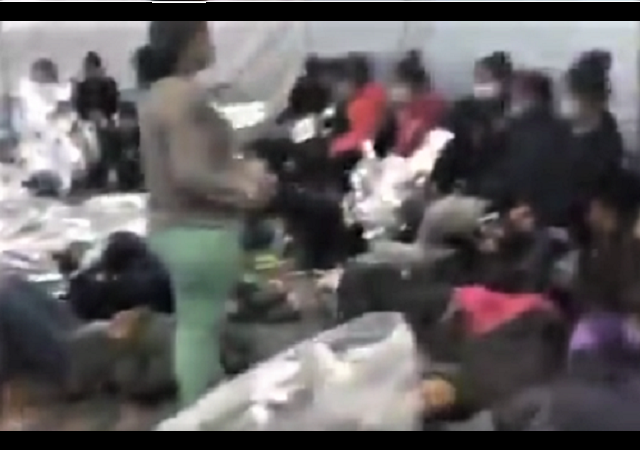 As the Biden administration lies about the border crisis and tries to bully Republican lawmakers into deleting their photos of Biden’s over-crowded illegal immigrant cages, the media works overtime to try to obfuscate the crisis.

It’s not working, though, according to a recent ABC News/Ipsos poll that shows the majority of Americans see the border crisis as a crisis and disapproves of Biden’s handling of it.

Biden has banned news media from the cramped “pods” (new word for “cages”) where the Wuhan coronavirus runs rampant amid inhumane conditions, and the media is happy to accept that. We hear no cries of suppression of the press or fascism now that their guy is in the White House, and we will not.

These are the pictures the Biden administration doesn’t want the American people to see. This is why they won’t allow the press.

This is the CBP facility in Donna, Texas.

This is a humanitarian and a public health crisis. pic.twitter.com/UlibmvAeGN

This is a crisis. https://t.co/XLdLZIlBjL

Indeed, rather than demanding access to the detention facilities that are overflowing with children, the media is opting to avoid the topic unless it’s a vomit-inducing cheerleading piece about what a nice guy Biden is and how hard he’s working to help and how he just needs more money to throw at the problem.

So serious are media outlets about propping up Sleepy Joe “Kids in Cages” Biden that the AP has instructed staffers not to use the term “crisis” in discussing the border crisis. I kid you not.

The Associated Press agrees with President Biden’s White House that the situation along the U.S. southern border is not a “crisis,” and it instructed staffers not to use the dreaded c-word when reporting thousands of unaccompanied children have attempted to enter the country.

Journalist Julio Ricardo Varela tweeted a series of images from an internal memo the AP distributed warning staffers not to call the situation a crisis. The Associated Press confirmed its authenticity in a statement.

“That is indeed is a memo from AP Vice President and Editor-at-Large for Standards John Daniszewski,” an AP spokesperson said to Fox News.

. . . . One of the memo’s “tips” revolved around the word “crisis,” which the newsgathering service warned reporters not to use.

“The current events in the news – a sharp increase in the arrival of unaccompanied minors – is a problem for border officials, a political challenge for Biden and a dire situation for many migrants who make the journey, but it does not fit the classic dictionary definition of a crisis,” the memo said.

“Therefore, we should avoid, or at least, be highly cautious, about referring to the present situation as a crisis on our own, although we may quote others using that language,” the memo continued. “If using the word ‘crisis,’ we need to ask of what and to whom.”

. . . . Associated Press style and guidelines are used by news organizations across the globe and often set the tone of the way news is characterized.

Here are the related tweets:

In the interest of informing the public and being fully transparent as a way to inform other editors, this is the internal memo I received from the @AP (4 tweets to follow).

Subject: From the Standards Center: A note about the current increase in border entrances

Next part of @AP memo pic.twitter.com/CtnxdsAXkU

This latest edict from the AP is likely a response to polling that shows that despite the best efforts of the media arm of the Biden White House, Americans stubbornly refuse to believe their lies.

ABC News and Ipsos both posted about their recent poll, each headlining favorable numbers for Biden on his handling of the Wuhan coronavirus pandemic. However, a closer look at the numbers reveals that Biden is in serious trouble over what Ipsos preciously terms “the situation at the border.”

Republicans are seizing on the flow of migrants at the southern border as a “crisis” — a term that White House aides have refused to invoke while also acknowledging the troubling circumstances — and accusing the current administration’s hasty rollback of tough immigration policies implemented by former President Donald Trump as the cause.

The issue of immigration is one of the most polarizing among those included in the poll, with clear majorities of Republicans (89%) and independents (54%) disapproving of Biden, while one-third of Democrats say the same.

IPSOS casts the data in terms of political “polarization,” hilariously noting that only 30% of those polled thought Biden, who ran as the unity guy, was uniting the country.

Views toward Biden remain highly polarized, with deep partisan cleavages present on every single issue. Notably, however, a majority of Republicans back the job the president is doing on the vaccine rollout.

The left’s response to these numbers is entirely predictable.  Instead of competently addressing the very real border crisis, Democrats, their media propaganda arm, and their Big Tech enforcers will double-down on outright lies, deceitful spin, and authoritatively shutting down the truth as “disinformation.”

Only when the American people are completely in the dark about what is going on and have no access to the truth will the leftists’ twisted and inverted version of “Democracy” flourish.

Hmm. How to describe the situation without using the word crisis? So hard. How about catastrophe? Apocalypse? Disaster? Disaster is good!

I’m with the AP. There are much better words to use than crisis!

Right out of their private Strunk and White playbook, the AP is pulling out all the stops now as it prepares the journalistic Death Star to strike the rebel alliance.

On a more serious note, the United States is at a time and place where progressive liberals, the political class, the DOJ, the FBI, Antifa, BLM, and now young urban minorities are not held responsible for what they do, but law abiding citizens are held responsible for what the aforementioned group does. Ask Mayor Bowser, having your vehicle carjacked and getting yourself killed by the perpetrators is your fault.

Joey Biden, or did his handlers send a political operative who was hired two weeks ago from DC to the Texas border to block cameras, and threaten other Senators by deliberately obstructing legitimate congressional oversight.

I’m so old, I remember when the goal of the press was to inform the public, not insulate it.

I think it is worse than insulation.. it is misdirection, purposeful misdirection. I am old enough to remember when a news person made a “mistake”,, it was a big deal.. Truth and accuracy used to be a thing.. SMH

Just look at Mr. Branco’s brand new cartoon… He gets it.

Here’s a novel idea: Randomly poll 10,000 American citizens about the effectiveness and competence of the Biden administration without regard to party affiliation. It’s much too easy to explain away the average American’s concerns by saying they’re (insert name of group here) so it’s no big deal.
.

Lesson #47,629 on how to pretend away reality.
Once upon a time AP was a newsgathering source, but they haven’t been one for a long time.

The MSM spent eight years fawning over Obama and covering up his misdeeds. And they even tried to do the impossible and make Hillary look good for the 2016 presidential elections and get her elected. So why is anyone surprised now that they are willing to do what is necessary to cover-up the absolute disaster and incompetence the Biden regime is, was, and will be is beyond me. It’s the liberal mainstream media folks, it’s what they do.

When does the willing actions of the media become an in kind contribution to a political entity? Sloe Joe and his apparatus are clearly benefactors of large amounts of favorable publicity.

Where was AP when all MSM screamed that Trump created a border crisis. For weeks we were told Trump is the devil for wanted to control the border.

Now, illegal immigration is worse than at any time during Trump. But this time it’s not a crisis. Hypocrisy so tick you can cut it with a knife. I would be so ashamed to call myself a journalist these days. Equivalent to calling yourself a liar.