I’d say WaPo and CBS News lack self-awareness, but they know what they are doing. 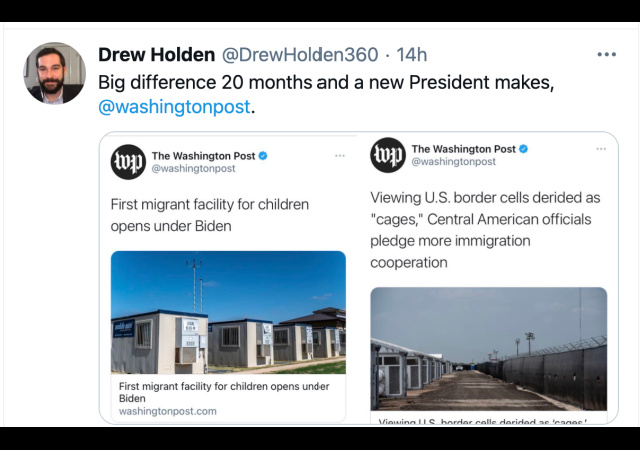 Joe Biden is president now so everything the media once railed against is now totally fine.

It is weird how “kids in cages” turned into “shelters” or “migrant facilities” for kids.

Let’s look at The Washington Post and CBS News!

When a Republican is in office, they're "cages"

When a Democrat is in office, they're "shelters" pic.twitter.com/nWrlp3pvJc

What the heck? I’d say they lack self-awareness, but they know what they are doing. They do not care because they can get away with it.

I will provide snippets from the articles. I urge you to read the articles because it is all about tone.

The ones published during Trump’s administration sound harsh, making Trump sound like a soulless and heartless human being.

The two published this week about the exact same circumstances, but occurring during Biden’s administration sound sympathetic to the migrants and Biden. The outlets feel bad for the migrants, but also for Biden’s team.

Something tells me we will not get in-depth articles about these facilities in the near future. I doubt we will get videos or inside testimony either.

Dozens of migrant teens boarded vans Monday for the trip down a dusty road to a former man camp for oil field workers here, the first migrant child facility opened under the Biden administration.

The emergency facility — a vestige of the Trump administration that was open for only a month in summer 2019 — is being reactivated to hold up to 700 children ages 13 to 17.

Government officials say the camp is needed because facilities for migrant children have had to cut capacity by nearly half because of the coronavirus pandemic. At the same time, the number of unaccompanied children crossing the border has been inching up, with January reporting the highest total — more than 5,700 apprehensions — for that month in recent years.

But it also quoted HHS Spokesman Mark Weber saying the facilities shouldn’t have had a bad reputation under Trump:

Weber said the facilities received a bad rap under the Trump administration because many people associated them with the detention centers run by Immigration and Customs Enforcement. But the children always received good care and that never wavered between administrations, he said.

The DHS Office of Inspector General’s review found at least 860 migrant children were left in Border Patrol holding cells longer than the 72-hour limit mandated by U.S. courts, with one minor confined for 12 days and another for 25.

Many of those children were put in chain-link holding pens in the Rio Grande Valley of southern Texas. The facilities were designed as short-term way stations, lacking beds and showers, while the children awaited transfer to shelters run by the Department of Health and Human Services.

Due to the steady increase in border crossings by unaccompanied children, nearly 90% of the 8,000 available beds administered by the federal agency charged with housing these minors are being occupied. On Monday, the number of children housed by the Office of Refugee Resettlement, a branch of the Department of Health and Human Services (HHS), reached 7,100, leaving fewer than 900 empty beds.

The uptick has alarmed government officials, shelter operators and advocates who are worried about their ability to address one of their chief shared concerns: children spending prolonged periods of time in Customs and Border Protection (CBP) facilities, most of which were designed to hold migrant adults.

“We absolutely are concerned,” an HHS official who requested anonymity told CBS News. “We are assessing all of our options on the table to make sure we have the capacity to house kids and take care of them and make sure they’re not backed up in CBP custody.”

CAGED AT THE BORDER! 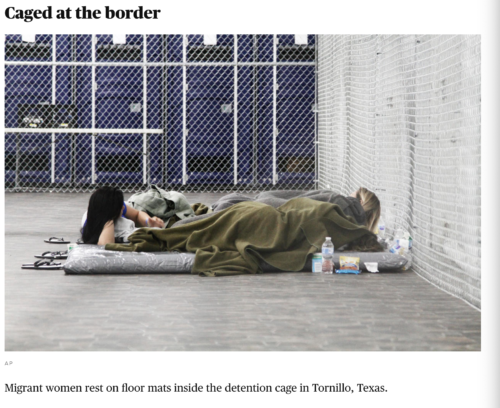 A researcher told “CBS This Morning” that at the Clint facility, about 20 miles southeast of El Paso, more than a dozen children had the flu, and that some were in quarantine cells without adult supervision. The researcher added that young girls were taking care of a sick two-year-old boy who was in filthy clothing without a diaper, and that the children said they were fed uncooked frozen food and had gone weeks without bathing. CBS News reached out to immigration officials, and has not yet heard back.

Apprehensions in the El Paso border area have spiked more than 600% since last year. In May, the Office of the Inspector General pointed to dangerous overcrowding at the El Paso facility, showing migrants packed into holding cells.

According to current rules, children should only be held by Border Patrol for 72 hours before they’re transferred to Health and Human Services. But advocates say that children are being held for longer, and that they’re just being transferred between detention facilities to comply with the guidelines.

There is no coming back for these fucking fucks.

Who knew how easy it would be to expose the left? To get them to expose themselves. All that was needed was for them to steal the election.

Exposing them doesn’t do any good. Their useful idiot common folk larks happily sing along knowing it’s fake news propaganda while the leftist techopoly severs our side’s vocal cords (or shadow cuts them to keep their misdeeds unnoticed).

Why no reporting on the inhumane conditions the “migrant”’s parents subject them to in even attempting to sneak into the US?

I’ll remind you every day
Not fake news:
It’s “Drive-by media” from here on out…

We’ve basically become the USSR. Thanks to action of 5% of the population and another 40% who are brainwashed to accept whatever the DNC Media tell them.

Drive-By media
To remind them of Rush every day

I just don’t like that term. To me, it connotes short attention span rather than mendacity.

So what I’m reading is that Biden’s lax border policies are exacerbating already overcrowded facilities.

AOC says there is a faucet in the same room as the toilet.

The media get away with this because there are no consequences. Half the country approves, an unknown but significant enough portion of the other half won’t even notice.

I’m confused the article clearly shows that the kids have been removed and put into alternative facilities which appear to have been purpose built. In other words there are no longer kids in cages which was the controversy withe Trump on this specific issue. I don’t get what the issue is with the reporting. That seems pretty plain.

The problem is they are the same facilities, following the same protocols since at least the Obama administration. In other words nothing has changed except how they are being described.

Ok I’ll take your word for it, haven’t the time to check it out right now. Thanks for clarifying.

Yes, yes, we all care about how “busy” you are and when you give us your valuable time to concern troll and pretend to be objective.

I try to be objective yes, and as I’ve said before I’m not a troll.

And yet you fail on a daily basis remarkably well.

I think that comment is more a reflection of your own lack objectivity.

It explicitly says that these are the same facilities: “The emergency facility — a vestige of the Trump administration that was open for only a month in summer 2019 — is being reactivated”

Kids in cages started under Obama.

Like the shrews on the view stated when informed that the kids in cages policy started under Obama, “I don’t care, this is about Trump”

My understanding is that’s true but the child separation policy was Trumps alone.

It should be obvious even to a third-grader that this is false.
If you don’t separate kids from adults, why is there even such a thing as kid cages?
There were kid cages under Obama.
QED.

The cages were built to accommodate an influx of unaccompanied minors. Get your facts straight. It’s the Trump administration which then carried out the family separation policy.

Mark, you are wrong. Child separation started under Obama, specifically because children were being brought in by people who were not their parents. Often for use as child prostitutes.

I’ve done a bit more digging into it, partially correct. It appears that it was done in exceptional circumstance where a parent was taken away for a serious crime; nevertheless it wasn’t a blanket policy which is what Trumps administration had with his zero tolerance policy.

To Obama’s credit, separation of child and trafficker, predator, undetermined, was a humanitarian choice. The problem for WaPo of demos-cracy is aborted in privacy fame, is that they want to abort the baby, cannibalize her profitable parts, sequester her carbon pollutants, and have her, too.

Yes, but the media shrieking about kids in cages didn’t start until Trump inherited them.

Geez, you’d think it’d be all over the news.

“Biden lets the children out of their cages!”

I imagine child traffickers are pleased with the new setup. By providing the “migrants”/minors with their own individualized compartment, the traffickers will enable more of their clients to “take a test drive” of the merchandise in relative privacy.

“It is weird how “kids in cages” turned into “shelters” or “migrant facilities” for kids.”

Just like the “whores” in Red America are “sex workers” in Blue America, and cost twice as much. Confusingly, they provide the same assortment of STDs.