“Republicans boast they have not pulled a Kavanaugh. In fact, they’ve treated Ketanji Brown Jackson worse,” the Washington Post editorial board alleged. 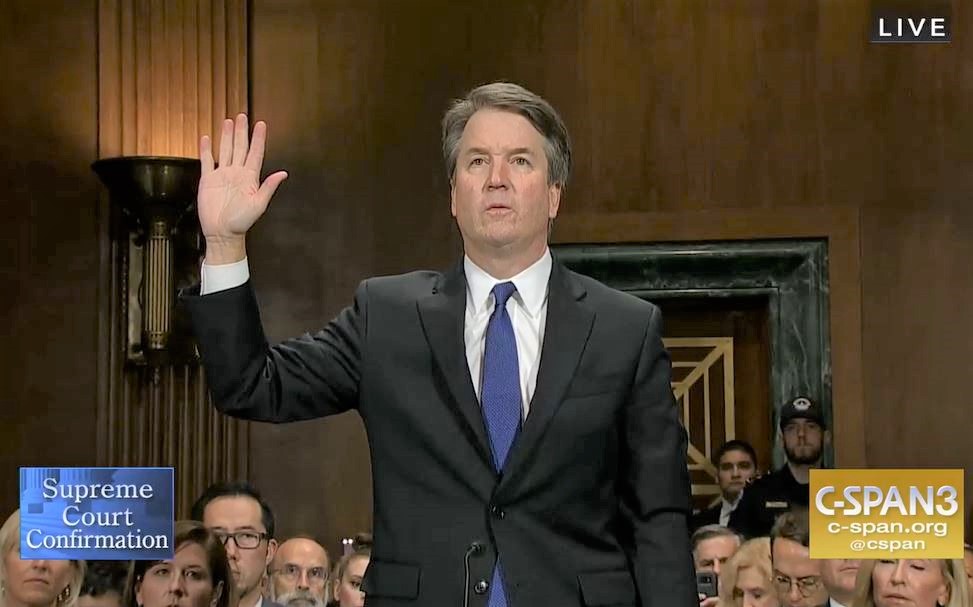 The mainstream media really pulled out all the stops this past week to portray President Biden’s Supreme Court nominee Ketanji Brown Jackson in a sympathetic light, as a victim of the supposed GOP “misogyny” and “racism” they claim was on display during her confirmation hearings. They even went so far as to emphasize the lone tear Jackson appeared to wipe away when Sen. Cory Booker rose to her defense in Spartacus-like fashion.

Another way some media outlets have attempted to portray Judge Jackson as a victim is by trying to memory hole the disgraceful nature of the Brett Kavanaugh confirmation hearings, as though Republicans have simply moved on and forgotten about what happened in the fall of 2018 when Kavanaugh was hit with 11th-hour accusations of rape in a politically calculated move by Senate Democrats.

Case in point, the Washington Post in an editorial published on Wednesday declared that Republicans had treated Jackson “worse” than Democrats treated Kavanaugh:

Republicans boast they have not pulled a Kavanaugh. In fact, they’ve treated Ketanji Brown Jackson worse, the Editorial Board writes https://t.co/HS2NOlmeFT

In the piece, they claimed in so many words that questioning Jackson’s sentencing record on child sex predators, her work defending Gitmo detainees, and her ties to far-left organizations was much more shameful than being accused of being a serial gang rapist:

A woman credibly accused Mr. Kavanaugh of sexual assault. Democrats rightly asked the committee to investigate. After a superficial FBI review, Republicans pressed forward his nomination. In the end, it was Mr. Kavanaugh who behaved intemperately, personally attacking Democratic senators and revealing partisan instincts that raised questions about his commitment to impartiality.

By contrast, Republicans have smeared Judge Jackson based on obvious distortions of her record and the law. Mr. Graham and others painted her as a friend of child pornographers, despite the fact that her sentences in their cases reflect the judicial mainstream. Even conservative outlets had debunked these accusations before the hearings began. The more Judge Jackson argued for rationality in criminal sentencing — or attempted to, as Mr. Graham continually interrupted her — the more Mr. Graham ranted about the evils of child pornography, which Judge Jackson had already condemned repeatedly and her record plainly shows she takes seriously.

For starters, no, Kavanaugh was not “credibly accused” of rape. Not a shred of hard evidence was ever presented unless the politically opportunistic ramblings of disgraced shysters like Michael Avenatti count as “evidence.”

Secondly, I’m pretty sure that most any man who was falsely accused of being the ringleader of a secret college gang rape cult in an attempt to burn his reputation to the ground over disagreements about abortion would passionately defend themselves and their characters in a similar fashion. Kavanaugh was sitting in front of his family when some of this vile stuff was being alleged, for crying out loud. What did his critics expect? Tight smiles and “no comment”? Please.

Later, the WaPo tried to pin the bulk of the politicization of judicial confirmation hearings on “clownish” Republicans, which was laughable when one digs back further than 2016, which the WaPo was unwilling to do for reasons that should be obvious to everyone:

Neither side is blameless in the politicization of the confirmation process. But, particularly after they iced out then-Judge Merrick Garland in 2016, Republicans have done the most damage. The clownish performances by Mr. Graham and others continue them on that trajectory.

Supreme Court Justice Clarence Thomas recently got out of the hospital and is probably home resting, but I’m pretty sure he might like a word with the WaPo over that assessment, as would Robert Bork if he was still alive.

And in a similar opinion piece published a couple of days after the editorial board’s, WaPo columnist Ruth Marcus proclaimed that “smear and degrade” was the order of the day for Senate Republicans when it came to Judge Jackson and that “never has a confirmation hearing been less about law and more about partisan point-scoring and presidential campaign-launching.”

In fact, the name “Brett Kavanaugh” was not mentioned once, despite the fact that Marcus was among the leading proponents of trying to get Kavanaugh’s nomination tossed:

The unmitigated GALL of the Washington Post to push this. Marcus led the effort to destroy Brett Kavanaugh’s life with character assassination — for no other reason than she worried he didn’t share her love of abortion. Disgusting and evil. https://t.co/Qvn66sN2BS

Also conveniently left out of Marcus’ piece was the fact that there was very much some “presidential campaign-launching” going on during the Kavanaugh hearings, in particular from Booker and his colleagues Kamala Harris and Amy Klobuchar, all of whom just a few months later declared their intentions to run for president.

As Legal Insurrection has previously documented, the Kavanaugh hearings were an ugly, nasty affair, one of the more shameful episodes in the history of Supreme Court confirmation hearings, not just because the baseless accusations that were made about Kavanaugh but also because of how shamefully Democrats conducted themselves.

I remember, for instance, how radical activists stoked by media/Dem-driven lie after lie about Kavanaugh tried to break down the doors to the Supreme Court to prevent him from being sworn in:

The Washington Post‘s editorial board writers and opinion columnists can feel like things were unjust and unfair this past week for Judge Jackson all they want to, but unfortunately for them, the actual facts don’t care about their feelings.

If they were Trump supporters banging on the Supreme Court doors, they would still be in the DC gulag. THIS is what trying to stop a vote looks like.

Why, it looked just like an “insurrection,” by the left’s definition….

obviously the pResident isnt the only one with memory loss

Bezos’ Compost: Pravda on the Potomac, where the truth goes to die in darkness.
Why anyone pays attention to this rag escapes me.

No mention of her desire to find a way to stop the deportation of illegal immigrants by overruling a statute that gave the DHS sole discretion, the same ruling that was overturned by her very liberal home court 9-0.

Not hyperbole. The ComPost ran an op-ed saying the problem in the Middle East was that not enough innocent Jews were being killed.

Even thought Clarence Thomas is black, he was treated like dirt at his hearing. Biden and Kennedy were especially rude.

As to KBJ, they have done everything but kiss her rear end. They probably did that too when I wasn’t looking.

About time for someone to kick out the medias teeth. Let them still talk but everyone will know they are all bark, no bite.
Trump was doing a great job.

The reason they are all bark and no bite is because they no longer have teeth. They get in the way of sucking up to their Democrat overlords.

I think this is “post projection projection” by the left; claiming we are doing what they actually did (as opposed to what they are doing) for once.

The rank dishonesty and willful “forgetfulness” of the left, particularly in the media, which has access to the same internet we do, and their own records to boot, is distasteful at the level of projectile vomiting.

I’m curious. Does anyone imagine the WaPo’s dwindling readership actually believes what they write?

answer: yes, they do, blindly