Kavanaugh Speaks Up, Denies All Allegations: “I want a fair process where I can defend my integrity I know I’m telling the truth”

Kavanaugh Speaks Up, Denies All Allegations: “I want a fair process where I can defend my integrity I know I’m telling the truth”

“The truth is I’ve never sexually assaulted anyone, in high school or otherwise” 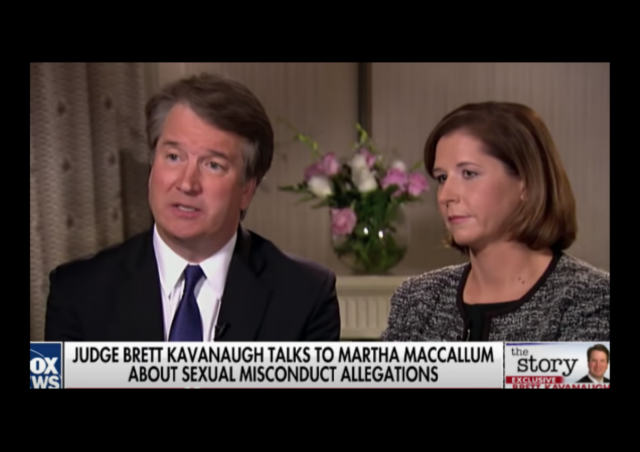 God bless Brett Kavanaugh and his family who are under attack by Democrats.

Earlier Monday, Kavanaugh wrote a letter making clear he is not intimidated by the political campaign to destroy his character nor will he be pushed to withdraw from the process.

Monday evening Judge Kavanaugh and his wife sat down with Fox News’ Marcha MacCallum for a public interview.

Some snippets of the interview:

Kavanaugh shared details of his sexual past through high school, far more than should be necessary for any public official. But he’s willing to reveal deeply personal decisions to clear his name.

Brett Kavanaugh: "We're talking about allegations of sexual assault. I've never sexually assaulted anyone. I did not have sexual intercourse or anything close to sexual intercourse in high school or for many years thereafter." pic.twitter.com/KNkwv4zHGN

Brett Kavanaugh: "I think everyone is judged on their whole life. I am a good person. I have led a good life. I tried to do a lot of good for a lot of people. I am not perfect. None of us is perfect. I am not perfect, but never, never done anything like this." pic.twitter.com/qdDINooN0o

Ashley Kavanaugh: "It's very difficult to have these conversations with your children, which we've had to have."pic.twitter.com/2e3kyQYPVC

Kavanaugh understands that the implications of caving reach well beyond his nomination to the Supreme Court.

“We’re looking for a fair process where I can be heard and defend my integrity my lifelong record,” he said, according to an excerpt. “My lifelong record of promoting dignity and equality for women starting with the women who knew me when I was 14 years old. I’m not going anywhere.

“I want a fair process where I can defend my integrity, and I know I’m telling the truth. I know my lifelong record, and I’m not going to let false accusations drive me out of this process. I have faith in God and I have faith in the fairness of the American people.”

“There’s a chance that this could be one of the single-most unfair, unjust things to happen to a candidate for anything,” Trump said following a meeting Monday afternoon at the United Nations. “In my opinion, it’s totally political … Brett Kavanaugh is an absolutely outstanding person. Hopefully he will be confirmed quickly.”

In his letter, Kavanaugh wrote:

These are smears, pure and simple. And they debase our public discourse. But they are also a threat to any man or woman who wishes to serve our country. Such grotesque and obvious character assassination—if allowed to succeed—will dissuade competent and good people of all political persuasions from service.

As I told the Committee during my hearing, a federal judge must be independent, not swayed by public or political pressure. That is the kind of judge I will always be. I will not be intimidated into withdrawing from this process. The coordinated effort to destroy my good name will not drive me out. The vile threats of violence against my family will not drive me out. The last-minute character assassination will not succeed.

It’s crucial for Kavanaugh, Trump, and the Republican Senators to hold firm and not give in to this smear campaign. They have to prove to the Dems and to the country that a smear campaign will not work. If they were to give in, the Dems would use unsubstantiated accusations and salacious rumors to smear every Republican nominee and candidate.

I still doubt that Ford will testify under any circumstances, because she would open herself to perjury charges. The Dems on the committee know that, which is why they want to shut down her testimony. It’s better to have vague accusations than sworn testimony that might be proven false.

“Ashley Kavanaugh: “It’s very difficult to have these conversations with your children, which we’ve had to have.”

I thought about this quite a while ago, and the idea that his children are being harmed is just awful.

Society needs to put a stop to these smear campaigns by making those conducting them suffer. In the end they are bullies, and bullies understand only one thing.

There is no point referring to the Senate as an “august” body anymore. It has turned into Ultimate Fighting.

“It has turned into Ultimate Fighting.”

Nah Phil, that would require republicans to fight back.

These would be the children the protesters let in by Democratic senators’ staff chased out of the committee chamber, which Sen. Durbin praised as the “noise of democracy”, yes?

I don’t think the left much cares about them.

Yes, and Dick Durbin was in on the phone call that orchestrated it.

I agree, it was never the intention that Ford would ever testify and I suspect that the Dems were expecting a different reaction to her stepping forward with her spurious charges. This wasn’t like Weinstein, Cosby and Franken where the first accuser had proof and was quickly followed by a flood of additional accusers with proof. Ford was a dud.

A few hours ago, Schumer came out and repeated his statement that he would do whatever it takes to stop the Kavanaugh confirmation. That was probably because earlier today, McConnell announced that he would introduce the nomination for confirmation Thursday after the committee hearing implying that it would happen with or without the Judiciary Committee recommendation.

If true, then the Dems are in maximum panic mode. Maybe no one would notice if Trump fired Rosenstein Thursday.

I have made this very point before! REAL sex predators have history! History that caught up with Clinton, Franken, Weinstein, Cosby and the rest of them Democrats!

Personally, I would have advised against making this appearance, in advance of Thursday’s testimony. Too fraught with potential risk, even in an ostensibly friendly setting and with a sympathetic interviewer. But, I can’t blame Kavanaugh and/or his wife for wanting to get a little air time after having been ceaselessly beaten like a pinata for the past month, or, however long this saga has been going on. This guy is human. I’d be going stir-crazy, if I’d been on the receiving end of half of the crap this guy has been subjected to, in the last two weeks, without a chance to offer a defense or a rebuttal.

Public relations and image management is part of the battle, and, with the help of their Hollywood allies, the Left has always excelled at crafting propaganda narratives in service of the Dumb-o-crat agenda. It has to have been grating for Kavanaugh to basically sit confined in a room all day, while the Leftist pundits, journalists, grandstanding Dumb-o-crat pols, Hollywood “celebrity”-twits and everyone under the Sun goes hog-wild and gets in their two cents about his life history and his character.

So, this is what the Dumb-o-crats have brought us to — a preeminent jurist and judge of impeccable personal and professional credentials has to bare his personal sexual history to the world, in order to bolster his defense against the most transparently contrived, vindictive, suspect and politically-motivated allegations conceivable.

Mind you, I don’t give a damn about Kavanaugh’s sexual history — he has nothing to be embarrassed about, in revealing this. But, it is totally on the Dumb-o-crats that we have hit a new nadir in our national politics.

When the GOPussies stop caving in at the first cross word from the lefties and launch counter-offensives this enemy action will cease. Until the Republicans do we’ll have to jerk a knot in their necks and kick their shins.

Until someone figures out how to change the democrats most powerful ally – the press- it wouldn’t matter how many counter-offensives they launch.

Have you been reading all the headlines about keith ellison and his brutalizing women? Neither have I.

How about all those huge banner headlines about cory booker’s self admitted groping when he was in high school? I’ll bet you haven’t seen those being written daily or the continual airing of it either.

I still think they should invite the Ellison ex to the hearing on Thursday. And Juanita B. as well. Then when Ford is a no-show, allow these women to testify in front of the cameras we all know will be there. After all, every woman has the right to be heard and believed.

If they did, so that The Show goes on even when Ford doesn’t appear . . . then I suspect that demands that Ramirez also be given a spotlight will dry up immediately.

Trump has worked them out already, much to their disgust. Economics will do the rest.

Lastest. Republicans have gotten a rape prosecutor lined up to do the questioning if CBF shows up.

Are the GOP eunuchs allowing the stall so they can raise money from it?

Possible side benefit, but the main problem here is the Fifth-Column Four: Sasse, Flake, Murkowski and Collins, who now, believe it or not, wants the committee to hear from Ramirez, even though nobody interviewed by anyone supports her bullshiite story.

Ok. Now I’m starting to worry. There are apparently references in yearbooks about Renata alumus of which Kavanaugh was one. Renata being a girl they had all slept with.

Now I don’t think he actually slept with her, but he could have “claimed” her. If that is the case it runs contrary to the school boy image he has been projecting.

I see they are trying another yearbook tactic. Old dog.

The American People are seeing the demoCrap’s agenda ,, Mob Rule , when everything else fails Slander & Defamation. When the Senate hears her testimony they MUST swear her in so that any/all lies CAN/WILL be prosecuted.