“For months, Republicans have used last summer’s protests as a political catchall, highlighting isolated instances of property destruction and calls to defund the police to motivate their base in November,” the NYT reported. 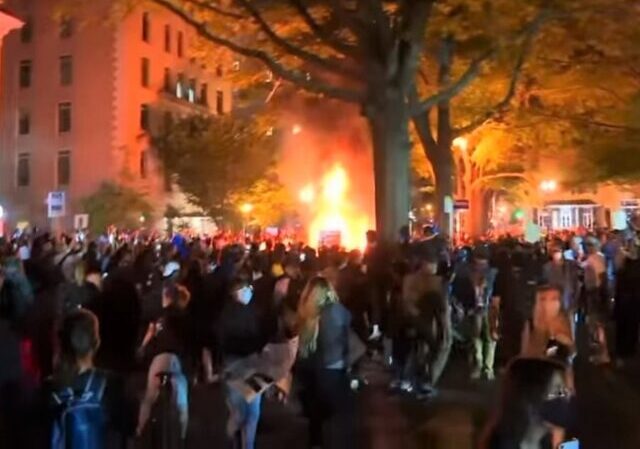 In the aftermath of the Capitol riots, Democrats and the mainstream media have done some pretty great flip flops on several fronts.

They rushed to blame Republicans who voiced objections to some of the electoral votes for allegedly “inciting” Trump supporters to storm the Capitol. Republican House and Senate members who did so were labeled “seditionists” even though in 2001, 2005, and 2017, numerous House Democrats also raised objections to some electoral votes cast – including Democrat Rep. Jamie Raskin, who Pelosi named last week as the lead impeachment manager.

Democrats and the media also began displaying newfound respect for law enforcement at all levels of government, as well as a disdain for rioting and chaos after the Capitol riots. The consideration was definitely a change from their months of amplifying the “Defund the Police” demands of violent Antifa/Black Lives Matter-led rioters last year and gaslighting the American people by referring to rioters who were terrorizing neighborhoods as “mostly peaceful protesters.” 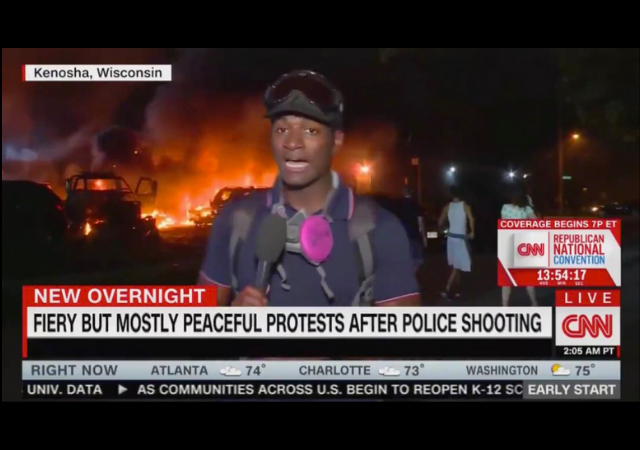 Here we are nearly two weeks after the rioters breached the Capitol, and comparisons between last year’s Antifa/BLM riots and the Capitol riots are still happening.

The New York Times is doing their part to aid Joe Biden’s and Kamala Harris’ fantastical revisionism about the violent Antifa/BLM “protests.” The paper claims the destruction and havoc wreaked by anarchistic agitators in 2020 amounted to “isolated instances of property destruction.” The phrase “isolated instances/incidents” was used three times in the piece (bolded emphasis added):

For months, Republicans have used last summer’s protests as a political catchall, highlighting isolated instances of property destruction and calls to defund the police to motivate their base in November. The tactic proved somewhat effective on Election Day: Democrats lost ground in the House of Representatives, with Republican challengers hammering a message of liberal lawlessness.

Republicans saw the Capitol attack as the work of outsiders or as justified by the summer’s isolated incidents of looting and property destruction.

Photo caption: After the pro-Trump mob stormed the Capitol, some Trump supporters tried to explain away the attack by citing isolated incidents of looting and property destruction over the summer.

They also used the word “misinformation” in their reporting numerous times, although not to describe the misinformation about “isolated incidents” they tried to pass off as factual.

Calling the NYT’s spin on the riots “revisionism” is actually putting it mildly:

It’s amazing how hard this story works to minimize the arson, looting, rioting and destruction that took place in 2020, when 40 cities declared curfews. The story describes these events as “isolated instances of property destruction”. This is revisionism. https://t.co/rpIvGSoDyj

Last summer was just "isolated instances of property destruction." That's how the NYT describes $1 – 2 billion of damage this summer in a news story – the biggest in US history.https://t.co/2bJdAHChS2 https://t.co/GFUAzWXsdc

"false equivalence" = "we don't want to talk about that" https://t.co/YSVxLCPHWy

40+ cities. Some totally destroyed. Economies decimated. Deaths. Suicides. Crime rampant. I dare the @nytimes to visit my hometown Mpls and do an honest piece of journalism and get back to us. Disgusting and totally delusional. https://t.co/LGjKQ5Shko

Not only “disgusting and totally delusional,” but also very reminiscent of “1984”:

It is what totalitarians do, revise history

“…And the process is continuing day by day and minute by minute. History has stopped. Nothing exists except an endless present in which the Party is always right.”

Also, don’t forget that the Associated Press told journalists not to call the riots that happened last year “riots.”

For anyone interested in revisiting what actually happened in 2020 during Antifa’s and BLM’s six-month reign of terror in Democrat-run cities across America, click here.

Gaslighting is all they have done for the last 5 years

It has become incessant for them

Our nation underwent a coup and is now run by a fascist Junta.

We can say with all accuracy the left has won.

Our only hope is in ditching the GOP and starving it to death as soon as possible.

If anyone here has the balls to defend the existence of the GOP in any way, it’d be dark humor to hear your argument. Almost as funny as watching McConnell begin slowly squashed under the tires of a bus.

Any admission of violence was already dismissed as right-wing agitators who infiltrated BLM. The lies won’t stop until the hatred that inspires the lies stops.

The hatred doesn’t inspire the lies. It just provides a convenient target. What inspires the lies is dishonesty, ambition, and smug self-righteousness.

Well, to be fair: the Franz von Papen Republicans were rather quiet last year during the rioting, burning, looting, raping and murdering by BLM/Antifa. Any Republican not named Trump seems to be okey-dokey with the “Summer of Luuuuuv”.

If only the republicans were Van Papens. They’re Vichy rats.

Biden: “We choose truth over facts.” Why should the NY Times and dupes be any different?

“You made me do it.” “You deserved it.” The eternal excuse of the wife-beater.

Difficult days ahead for the media. They’ll have to rely on more than Trump bashing to fill the space between the ads, besides the fact that the doddering, feeble-minded new CinC is hardly as interesting or newsworthy as Trump was.

The publishing industry is also going to suffer, as the steady supply market of tell-all books on the Trump White House is coming to an end.

I don’t think so. They’ll got into ‘obama’ mode, and try and create pop news around Jill ‘Dr. Pepper’ Biden, and America’s Whore, Kamala Harris.

“Difficult days ahead for the media.”

I do not see them being targeted by politicians, government strap hangers, street thugs, and the global fascist oligarchy.

The difficult days I see ahead, are for you.

McConnell has put us behind the 8 ball.

If you thought William Barr gave away our country to the left, McConnell is happily playing porter and carrying their bags.

McConnell doesn’t care. His life is secure. He’s strictly go along to get along. This is probably his last go round.
Wait til’ everybody finds out he promised the 2024 Presidential nomination to Mitt Romney in exchange for Romney not contesting the vote on Amy Coney Barrett.

The New York Times is run by the Methodist Church, a far left wing, group dedicated to socialism. “Pinchy” Sulzberger, publisher, is a care carrying Methodist.

At this point, calling the New York Times “Pravda” for its aversion to facts, its blatant dishonesty and its brazen, slavish and shameless water-carrying on behalf of its Dhimmi-crat masters, is an insult to Pravda.

OUT – Mostly Peaceful
IN – Isolated Incidents