MSNBC Reporter Describes Minneapolis “Protest” as “Not, Generally Speaking, Unruly” as He Stands in Front of Burning Building

MSNBC Reporter Describes Minneapolis “Protest” as “Not, Generally Speaking, Unruly” as He Stands in Front of Burning Building

“I want to be clear on how I characterize this. This is mostly a protest. It is not generally speaking unruly. But fires have been started.” 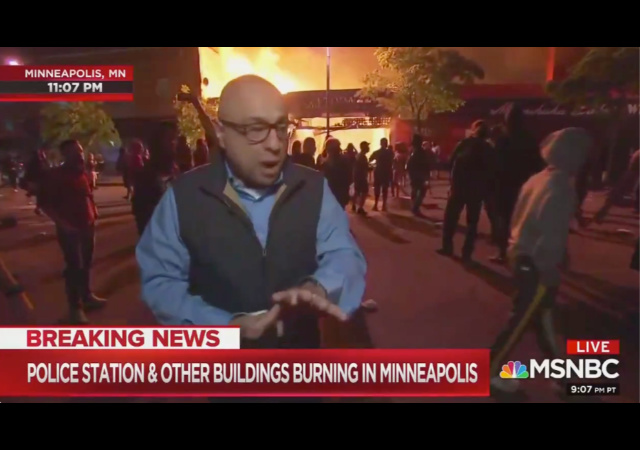 MSNBC is so laughable. Reporter Ali Velshi said on air that the Minneapolis protests in response to the George Floyd killing are generally “unruly.”

Velshi said this as he stood in front of a burning building.

MSNBC reporter just now: “I want to be clear on how I characterize this. This is mostly a protest. It is not generally speaking unruly.”

The guy is literally standing in front of a burning building in the middle of a riot. pic.twitter.com/IzCV6On4sF

Watching MSNBC try to explain this situation is incredible:

I want to be clear on how I characterize this. This is mostly a protest. It is not generally speaking unruly. But fires have been started. There is a deep sense of grievance and complaint here, and that is the thing. That when you discount people who are doing things to public property that they shouldn’t be doing, it does have to be understood that this city has got, for the last several years, an issue with police, and it’s got a real sense of the deep sense of grievance of inequality.

It’s sad that I’m not surprised MSNBC tried to downplay the riots even on live TV. The station has no integrity.

This is the moment when Minneapolis police officers abandoned the 3rd precinct building. Rioters chased them as they left and continued to throw objects at the police vehicles. pic.twitter.com/KoxAAYiUIN

The entire police station is now on fire in Minneapolis and police and firefighters have been instructed to stand down. The city is going to burn to the ground tonight. pic.twitter.com/1MtIXAEWtD

Video of Arby’s in Minneapolis burning.

Please note the brief image of celebratory fireworks as the building burns.

Welcome to the New Normal in riot etiquette. pic.twitter.com/HyxFXzUjpc

This is Minneapolis. Autozone, Target, numerous businesses looted and burned down. An affordable housing complex was burned to the ground. pic.twitter.com/LfKYYSImpV

I was just inside this Target this morning, it’s now being destroyed as protests in Minneapolis have devolved in some cases into looting. Some scary scenes tonight. #GeorgeFloyd pic.twitter.com/rBdyq4FBeu

Too good not to pass on, from Weazil Zippers.

Something tells me that this entire 2020 “COVID-19!” “Burn Down Minneapolis!” scenario will be reaching a crescendo all summer long, in a build-up before the November election, knowing that Donald Trump will win big against a Joe Biden.

It’s a way to drive the grievance demographic turnout for the elections. Because if they can turn out enough of those voters, they can get close enough to cheat, and win.

They don’t really need them to actually turn out.

the ballots will be filled out for them and counted anyway

You would hold it against them to actually work both angles? Tsk, tsk. You should be praising them for taking on the extra work instead of coasting on the power of the cemetery vote.

FROM START TO FINISH
THE DEMOCRATS OWN THIS.

Minneapolis hasn’t had a repub gov since dems took over on January 1, 1974.
Proving racism is the democrats foundation of their party.
Cops were hired under policies of the dem mayors, they were trained under the policies of the dem mayors, and they enforced the law under the policies of the dem mayors.
While I doubt they’ll finally decide to give Trump a try, maybe they need to just stay home to let the dems know they need to actually do something real for a change.
Kind of like Trump has done with the changes to the justice system, or the funding of black colleges or maybe even building an economy that not only included every minority, but where most were making good money for once and could change jobs to improve their lives as the jobs were growing and raises were needed to attract and retain good people.
This could be the change they really need.

TheFineReport.com in reply to notamemberofanyorganizedpolicital. | May 30, 2020 at 12:51 pm

No, the ChiComms own this. The democrats are mere hired hands.

The corruption of our news media and most of our politicians never ceases to be heartbreaking.

These are not riots or people protesting. It is a celebration of diversity.

Diversity or color judgment, including “racism”? Probably. The riots and supporters are noteworthy for being Pro-Choice, selective, opportunistic. Still, we haven’t progressed to a Hutu/Tutsi climate of diversity, or post-apartheid (“separation”) Progressive South African lynching events, or Zimbabwe levels of redistributive change, and other modern acts of social justice.

The most disgusting part is how many white women are in the crowd.

Those are Wiggers. Look it up.

Looks like this Ali fella was the Valedictorian at Baghdad Bob’s J-School and Urban Looter’s Academy. I bet his mom is proud!

Reporter Ali Velshi said on air that the Minneapolis protests in response to the George Floyd killing are generally “unruly.”

Actually, he said “NOT . . unruly.” That’s what gives it that special MSNBC mystique.

Odd how they never loot a library or bookstore.

I read elsewhere that they torched a library.

notamemberofanyorganizedpolicital in reply to The Friendly Grizzly. | May 29, 2020 at 3:23 pm

By the flame of passion for learning?

It’s not a baby, it’s a “fetus”, a technical term of art to socially distance technicians, abortionists, and feminists. It’s not a riot, it’s a protest. It’s not violence, it’s unruly. It’s not racism, it’s diversity (i.e. color judgment). These are all political congruence (“=”) constructs that aid and abet progress.

This is not what you think. Remember, the Kent State shooting was started by paid protesters.

Who knows what the media will do? I am suspect of it all.

I can’t stand back & watch this happen to a great American City, Minneapolis. A total lack of leadership. Either the very weak Radical Left Mayor, Jacob Frey, get his act together and bring the City under control, or I will send in the National Guard & get the job done right.

These THUGS are dishonoring the memory of George Floyd, and I won’t let that happen. Just spoke to Governor Tim Walz and told him that the Military is with him all the way. Any difficulty and we will assume control but, when the looting starts, the shooting starts. Thank you!

Yeah, want to guess why the social media company censored the latter tweet?

The people who are rioting are not there for justice or to support getting justice for Floyd. They’re thugs that are destroying these communities before our eyes

It isn’t a riot, as long as you don’t count the rioters.

It’s too bad he can’t be arrested for insulting his audience’s intelligence. Sure it’s MSNBC, but there are probably at least a few three-digit IQs watching it.

“I want to be clear on how I characterize this. The aliens are mostly friendly, only a very few of them are attacking random humans and sucking out their brains. This is not, generally speaking, a predatory invasion.”

Byline from “How to Serve Humans”

“I want to be clear on how I characterize this. This is mostly a protest. It is not generally speaking unruly.”

Wow. Suppose someone characterized a gang rape or murder as a “protest” and “not generally speaking unruly.” It is clear the MSM/DNC axis is trying to normalize mob violence.

It’s a riot, you fatuous moron.

I do think they are hoping for a Kent State.

when does minneapolis apply for covid relief money to repair and rebuild from this?

The thing is, he is kinda right. If he had said something like “What’s going on behind me is not indicative of the majority of the protests here, today,” he could have been right.

Vast numbers of locals protested peacefully over the killing of Floyd. It was a smaller group (maybe out-of-towners) that began the violent parts. As with a bunch of these incidents in the past, the a**holes take advantage of the situation and turn it to mayhem.

But to say “This is mostly a protest” is to show oneself incapable of clear communication (you would think a requirement for being a “journalist”, or maybe not), and just maybe being chained a little too closely to the published narrative.

As the mobs are turned out by their handlers to foment destruction and make this a “universal” problem for America.

Because breaking stuff and killing people is an appropriate response when someone else is killed. “Protest” violence with violence. Morons.

And, now in DC, Atlanta, LA, and loads of other places where they can take advantage of this incident to destroy civilization.

Maybe we should turn all those places into their own states (except DC)?

Note they are all D’Rat controlled……..

Not all the buildings are on fire.

notamemberofanyorganizedpolicital in reply to BierceAmbrose. | May 29, 2020 at 3:25 pm

Interesting editorial choice to fill the screen with a shot of burning buildings, while saying the opposite.

I’m assuming that is intentional, but I don’t get what it does for them? The Eagles Folly, perhaps? “You can’t buy, you’re lying eyes, and the files, are a think disguise…”

notamemberofanyorganizedpolicital in reply to BierceAmbrose. | May 29, 2020 at 3:24 pm

I think those sort of actions are called gaslighting……

It’s really not that bad!

10 November 1939. “In other news that was some vandalism witnessed in a few neighborhoods throughout the country. It is not knowing why. Official say it has nothing to do with the Jewish question.”

For those keeping score at home, Velshi is what we call a “moron”.

I like Town Hall’s “This is Fine” take (that is a meme with a cartoon dog having a drink while flames engulf the room all around him saying “This is Fine”).

It’d be be hilarious to watch him be burned to a crisp by the ‘unruly’ crowd.

Draconian rules and laws for me but none for thee….

Gee so most of America has been forced to quietly sit and watch their businesses, jobs, homes and food for their children become a thing of the past and to not do so makes them the worst people on the planet while others can loot, burn, destroy and kidnap, assault and murder and they are applauded and supported by the same media and politicians excoriating regular Americans upset at being destroyed

Thinking about it all: the swamp/left/islamic axis has jumped the shark.

It profitd a man nothing to sell their soul. But for a tv set?

Looters should be shot: but their street leaders first (by snipers).

I guess the meme at MSNBC is that the building is “burning in peace”. Has anyone else noticed that it is historically black cities and locations where this is going on? Only in battleground states?
I think one surprise to me is Columbus, OH, which is not normally considered to be a hotbed of racism (black mayor for the previous 20 years and majority black city council, black director of public safety, and recently-retired black police chief).

It is a state capital. However, the areas being burned seem to be away from the Capital Building in the state. Seems to me to be a “burn out the business to get out the vote” strategy. A lot of these businesses are minority operated and owned; seems like a stupid way to protest a black person is to burn out fellow people of color.