“she not only had a representation contrary to her political narrative, she tried to hide it. She tried to spin it as something else.” 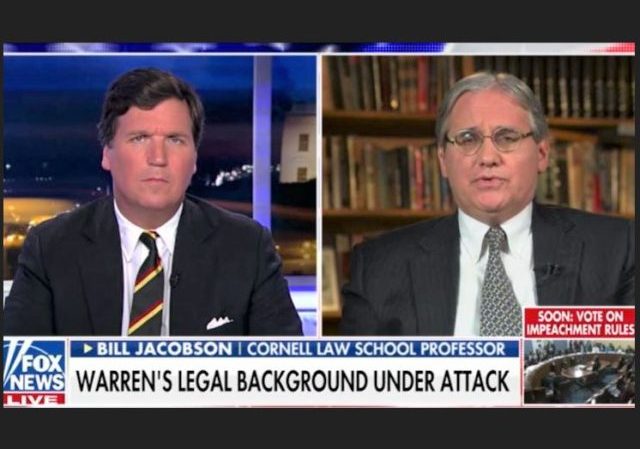 I appeared on Tucker Carlson Tonight on December 17, 2019, to talk about Elizabeth Warren’s legal practice, while also a professor at Harvard Law School, in which she made almost $2 million.

It’s a topic I have discussed on Tucker’s show before (here and here).

I have added hyperlinks to the transcript below, so you can see my prior posts on the linked topics.

TUCKER: Elizabeth Warren says she’s happy to debate Michael Bloomberg and his record on women, but is she here to hold her own record to the same scrutiny? Here’s specifically what we’re talking about. This has not received enough attention. In the 1990s, Elizabeth Warren provided legal assistance to Dow Chemical while it was trying to limit payments to women poisoned by the company’s silicone breast implants. And that wasn’t the only case in which Elizabeth Warren worked on the side of a major corporate power against consumers. Again, you haven’t read this piece in the Washington Post recently. Bill Jacobson, by contrast, is all over it. He’s a professor at Cornell Law School and a very precise historian, we would say. He joins us tonight. Professor, thanks so much for coming on.

WAJ: Thank you having me on.

WAJ: That’s right, this became an issue in the 2012 campaign for Senate against Scott Brown. When Scott Brown raised the issue that Elizabeth Warren made $200,000 representing Travelers Insurance in a case which ended up depriving asbestos workers of hundreds of millions of dollars. And that became a big campaign issue. And I analyzed it and I documented quite precisely and quite well I think, how her strategy and the representation she gave directly led to those asbestos workers not getting their money.

But that’s not all there is. When she was called out for that by the Brown campaign, she gave the Boston Globe a list of 10 cases she had worked on. It was a completely incomplete list and this is a history that she has. And she left off that list and I discovered at the time, her representation of Dow Chemical to help deprive breast implant litigants of money.

And she said, well, I was representing Dow Chemical, the parent company of the manufacturer ’cause I was trying to help the women get money. And that was of course, ludicrous. And that’s been demonstrated. And other newspapers recently have proven that.

She also represented an aircraft manufacturer against a family who lost a loved one. She said she represented a large energy company, one of the biggest coal users in the Southeast, in trying to save a rural electric cooperative. In fact, it’s well-documented that she was trying, her client was trying to liquidate the rural cooperative.

So at every step of the way, she not only had a representation contrary to her political narrative, she tried to hide it. She tried to spin it as something else and she never would disclose how much money she made doing it. I estimated it, because I found 22 of her cases, which now is up to over 50 cases. And I estimated that it had to be millions of dollars. And she is now admitted that when the Buttigieg campaign raised the issue, she disclosed that she made almost $2 million from this.

And so the question has to be, she is somebody who is throwing stones and lives in a glass house.

TUCKER: It’s unbelievable.  I mean, she’s like Mr. Burns on the Simpsons from what you’re describing. I mean, does she represent Union Carbide in Bhopal too? I mean, of all people. Just the irony here, Elizabeth Warren is always lecturing you about, and I don’t even like trial lawyers, and I wouldn’t do what she did. So like the irony is overwhelming.

TUCKER: Because they’re frauds. That’s why. You know, you know the answer, Professor. Thank you so much. You know, it’s funny. The media are so corrupt that we go to a law professor for real reporting and I’m just glad you’re there. Thank you for that.

By the way, why does no one bring up the $$$ she made by house flipping distressed assets after the 08 crash?

…’cause I was trying to help the women get money.

So, she WAS helping a woman get millions of dollars. Herself.

Sorry I missed it, Prof.
Glad you are getting air time!

I loved Tucker’s introduction, where he referred to you as a “precise historian”. So true, and such an epic description.

I liked that as well – it was a nice surprise, since I had just flipped Tucker on and didn’t know who was on deck. Nice job, Professor!

I like to think of myself as a precision commenter.

Great interview, every word was packed. Watching Tucker’s expressions while you were speaking…..priceless!
Here’s to many more appearances, a Professor!

Good appearance. Very classy of you not attempting to plug and hype the website.

Just wish Tucker had plugged LI in the intro!

You did good, and Tucker let you get it out!

WAJ: Thank you having me on.

Oh dear. Unfortunate phraseology. “Having me on” is equivalent to “putting me on”.

“The media are so corrupt we go to a law professor for REAL reporting…..”

But the Scott Brown reelection campaign in 2012 did not pound away at this deception like it should have. Scott Brown was a breath of fresh air in the special election he won in 2010. But as soon as he got to Washington, he pretty much turned his back on the nationwide network of grassroots supporters who literally got him over the finish line. He moved into Ted Kennedy’s old office, keeping Ted’s collection of memorabilia and wall-full of photos, as well as Ted’s staff… who screwed constituents, hoping the voters would blame the new Senator. He worked on the Dodd-Frank bill with the detestable Barney Frank, then tried to sell it to his supporters back home as “it needs work, but…” And the rest is history: Scott ran a weak campaign in 2012 and lost his hard-won Senate seat to Lie-a-watha.

What is it with these A-moral, politicians, that the *Demoncrat party, & their worshippers….idolizing these morally bankrupt politicians? How do they keep getting elected, & continue to violate most all morals, that man has come to respect? Has America, completely lost it’s moral compass?

No different that her being fired as a teacher for getting pregnant. She was never a full time teacher. She was in the speech dept as a therapist. She never had the job and in fact resigned.

Big nose warren…..Attorney….Libretard/Socialist…..Certainly has no soul, & is bound for hades! Theirs is the party of “rampant Abortion”,{ at any time during the trimester, even at birth…..kill them if the Mother wants that}….. & selling human baby body parts, for fun & profit…{Planned parenthood}…..taxpayer funded murder, of human babies! Open borders, Sanctuary Cities, & allowing criminals to run free, in these areas! Allowing Illegal Aliens to vote in national elections!…..{ These things, were never even thought of during the shaping of our Country, & Constitution!}…..

is “This”, what AMERICA HAS BECOME? 58% OF America, said…”NO”….on the impeachment of trump! Congress had a differenty opinon. & is shoving that down our throats!