Under pressure from Buttigieg campaign, Warren releases financial information. The biggest problem is not that Warren made millions, but that much of it was made fighting the people she now claims to champion.

The history of Elizabeth Warren’s political scandals is that she initially releases only the information she thinks people already know. When doubt is cast on her story and the controversy doesn’t disappear, she tries to get ahead of the issue with an information release which is incomplete. When even more doubt is cast, Warren repeats the tactic.

That was the pattern in Warren’s Native American scandal.

After initially denying knowing why Harvard Law School touted her as its first Native American tenured professor, Warren spent 7 years with a series of incomplete and questionable defenses, leading up to the disastrous 2018 DNA test. Only when facing political collapse, and having run out of defenses after 7 years, did Warren issue obviously contrived and deceptively-worded non-apology apologies.

That also has been Warren’s pattern with regard to her private law practice while a law professor at Harvard, representing, among others, major corporations against consumers, employees, and the people Warren politically claims to champion.

In 2012, Warren issued a list of 10 cases she worked on, and we proved her list was incomplete, including her representation of Dow Chemical against breast implant litigants. In 2019, as major newspapers began to investigate, Warren upped the list to over 50 matters. But Warren never released information as to how much money she made. I estimated it in the millions.

This was a problem not just because Warren kept secret how much she made, but because her corporate law practice was at odds with her political narrative, as we documented:

We recently covered how Pete Buttigieg’s campaign was raising the issue of Elizabeth Warren’s corporate practice, and calling on her to release how much she made, Buttigieg Senior Advisor hits Elizabeth Warren secrecy over $millions earned as corporate hired gun. 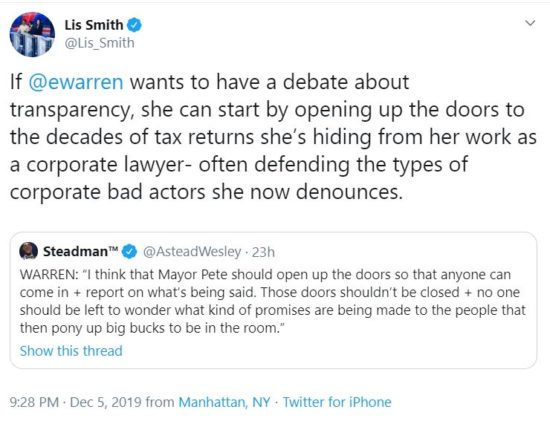 True to her pattern, Warren’s campaign just release numbers for her legal practice, showing she made just under $2 million. The Hill reports:

Sen. Elizabeth Warren (D-Mass.)’s presidential campaign on Sunday released updated information on her compensation from her past private legal work, with the total adding up to just under $2 million.

Her campaign’s legal work page now includes an itemized list of legal cases dating back to 1986 on which Warren worked, along with the corresponding sum earned for each case. Financial information for some cases remain unavailable.

Nothing to see here, move along? Not quite.

The biggest problem is not that Warren made millions, but that much of it was made fighting the people she now claims to champion. The issue is, will any of the Democrat candidates confront Warren at the next debate?

Earlier this year, Warren had released a list of about 50 cases that she worked on, but the descriptions of the work were at times misleading and the amount of income and dates for her work were not included.

While the cases released by Warren’s campaign stretch over more than three decades, the figures disclosed Sunday show that nearly all of the money was made from cases filed after she got her job at Harvard in 1995. (Warren was elected to the Senate in 2012.) …

Warren’s campaign did not release compensation information for all of the cases, reporting in some instances — including a case involving First Commercial Bank — that “the campaign has no compensation records for this case.”

NEW: Elizabeth Warren made nearly $2m as a consultant for corporations and financial firms while she was a law professor, according to records from her campaign. The payments don’t fit neatly with her current brand as a crusader against corporate interests https://t.co/DLqwA1SDK5

The reaction from Warren supporters has been anger, and trying to dodge the questions by pretending the $2 million was earned over 24 years, when almost all of it was in the decade before she ran for Senate, and by playing the sexism card:

Oh no! Elizabeth Warren made $47k a year (after taxes) as a lawyer. What a huge scandal! What's next, a living wage?! The poors not walking through the streets begging for scraps?!

When will this enormous scandal end? https://t.co/McaCKTlUe7

You mean Attorney is under paid and not fairly compensated for her work just like all women in the USA who earn less than their male counterparts. #ElizabethWarren

Bitch is a lying hypocrite. We see more evidence of it every day.

notamemberofanyorganizedpolicital in reply to southern commenter. | December 9, 2019 at 10:19 am

Lizzie should just stick a fork (or is that ax) into it.

something enjoyable about watching the party of “choice” aborting themselves…

She’s getting the barrelful of lies “out of the way.”

Won’t work. She’s a lying swine, and a cancer upon the Constitution.

notamemberofanyorganizedpolicital in reply to TheFineReport.com. | December 9, 2019 at 10:20 am

You can’t have a proper trial if each side doesn’t get the best possible representation. So it’s no problem at all to represent any side; it’s necessary.

Representing big corporations is not the problem. Her lying about it is.

Professor, do you suppose Pete is using your site for oppo research? Wouldn’t that be a hoot!

Hillary has never had a better recommendation than Liewatha Warren.

I don’t have a major problem with a lawyer working for corporations. I don’t have a problem with someone earning money provided it is legally done, even if it is at usury rates. It is no different than anyone would do if they could, being paid for services rendered that the customer approves to pay.
What is wrong with Warren is her dishonesty about everything. She appropriated Native American heritage knowing full well it might be “family lore” but likely a lie. Her own family had never done what she did, many denied ever hearing the BS that flowed from her, at least until she was running for President. She knew she needed an edge to get a cushy job at Harvard, she knew it worked before to claim American Indian heritage, so why not again?
Harvard wasn’t going to talk when it all started coming out, as it makes them look like losers and idiots, and the pretentious can’t have that.
The same thing with her legal practice. Which of itself is fine, except she makes claims against corporate America, wants to destroy and punish them for the things she defended them for and made a lot of money doing so.
Imagine her as President. She is like Pelosi without the cunning and intelligence. Warren is a pretender. She isn’t smart. She is manipulative, a proven liar, who projects her own malfeasance onto others because she knows she is guilty of doing what she claims others are doing.
Hypocrite is far too mild a term for what she has done through her whole life. Imagine the damage she could do to this country if she were obtain more power.
Her whole life is a lie. Why should a presidency of hers be any different than all the other areas of her life have been?

Ty,
Is there one D frontrunner without mindboggling flaws?
SMH.

Harvard Law hires law professors mainly from “Top 10” law schools. Warren graduated from Rutgers Law, ranked #184 at the time. There is NO WAY she would have been even interviewed were it not for the Native American claim. I can’t believe she had the balls to do that. I can’t believe Harvard didn’t substantiate that claim, given her lilly whiteness.

Harvard subsequently filed false labor stats with the DOL for years. I’m appalled and dumbfounded that the people of MA elected this buffoon as a Senator …. then again, they elected “Ted the Swimmer” many times.

I’m pretty sure the skanky squaw will not be the dem candidate. At least I pray she won’t.

Fauxcahontas is the worst case example of everything she complains is wrong with others. I don’t think this woman is even capable of telling the truth. Her brain is just wired that way. It’s in her DNA.

Once a fraud, always a fraud. Unlike Hillary, Warren is a terrible liar.

Gee, another dim caught lying….What’s the world coming to???

The real key is not the presidential race.
– she was a flawed candidate
– always destined to lose that eventually
– her budgets alone were disqualifying even to dems

When you are a fraud and reasonably good at selling Snake Oil, the natural path to take is to become a democRAT politician!

Who’s surprised? Very little Warren says fits with what she actually does.