The facts showing Elizabeth Warren’s deceptions aren’t “left-wing or right-wing, they are the facts”

The facts showing Elizabeth Warren’s deceptions aren’t “left-wing or right-wing, they are the facts”

…. and the facts are she’s not Native American, she wasn’t fired for being pregnant, and she tells a Me Too story that’s been cast into doubt not by the right-wing, but by The Boston Globe itself, which is virtually her house organ.” 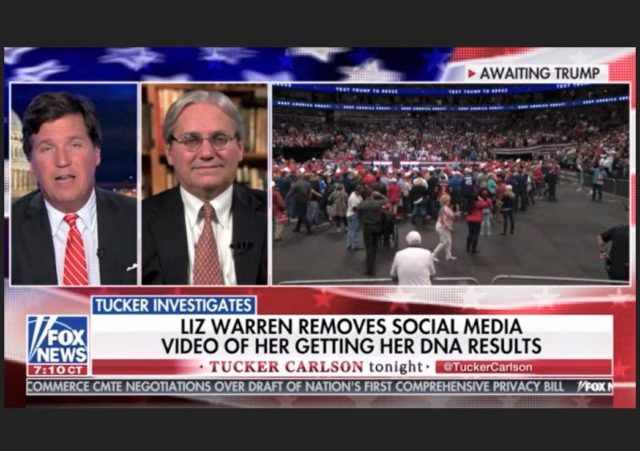 TUCKER: Warren’s phony American Indian heritage by the way is just one of many laws she has told to advance her career. Bill Jacobson is a professor of law at Cornell Law School and he joins us tonight. Professor, thanks so much for coming on.

TUCKER: So, this seems to be a theme, and I’m not saying this for partisan reasons. that Elizabeth Warren lies about her biography.

WAJ: Yes, and that’s I think a narrative that is developing about her, which is going to be extremely politically damaging if she were to be the nominee and get into a general election. We all know about the Native American problem. And I don’t think people fully understand how deceptive and manipulative it was, for a decade for employment purposes only, she claimed to be Native American and then she pretends like she didn’t think that would help her somehow.

And even when she was disclosed in 2012 by the Boston Herald during her Senate campaign, she spent almost seven years defending being Native American.

She blamed her parents for telling her stories. She blamed her Aunt Bea for saying that she had high cheekbones ‘like all the Indians do’ in her words, which of course if any other candidate had said that that would be disqualifying.[*]

TUCKER: But it’s maybe a bigger problem even than that professor. So just today, a mom in California reported to federal prison. Her crime in part was lying about her son’s race in order to get him in to college. Here he had Elizabeth Warren who lied about her race to seek employment advantage. That’s not a crime?

WAJ: Well, I don’t know if it’s a crime or not, but one thing she’s never disclosed is her full personnel and employment files. It would be very interesting to see what forms she signed for EEOC, Equal Employment Opportunity Commission reporting, and whether she misrepresented herself as Native American. There’s every reason to believe she did not meet the legal definition, but we don’t know what she signed.

And she’s told many other stories as well.

She’s portrayed herself as someone having been a lawyer fighting for the little guy. But as we’ve covered on your show before, in fact she represented large corporations against the little guy. She has a long history.

She had recently a story that she had been telling on the campaign trail that she was fired for being pregnant, and then facts came out that showed that wasn’t true, and she blamed the right wing smear campaign But in fact, that was disclosed and discovered by a socialist Bernie supporter.

So the facts aren’t left wing or right wing. They are the facts and the facts are, she’s not Native American. She wasn’t fired for being pregnant. She tells him Me Too story that’s been cast into doubt, not by the right wing, but by the Boston globe itself, which is virtually her house organ.

TUCKER: Virtually? Absolutely. Professor, thanks so much for joining us today. Appreciate it.

*My correction: The supposed comment about “high cheekbones” by Aunt Bea was about Warren’s “Papaw” (grandfather) not about Warren. I misspoke during the interview. It doesn’t change the point about the high cheekbones comment, but I want to be precise.

Here are posts backing up the statements in my interview:

Did Elizabeth Warren exaggerate her “Me Too” story?

Here’s what things look like “behind the camera” from the private studio in Providence Fox News uses for live links: 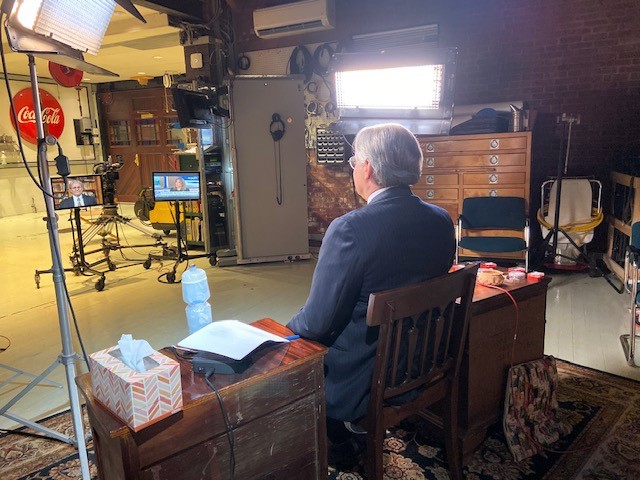 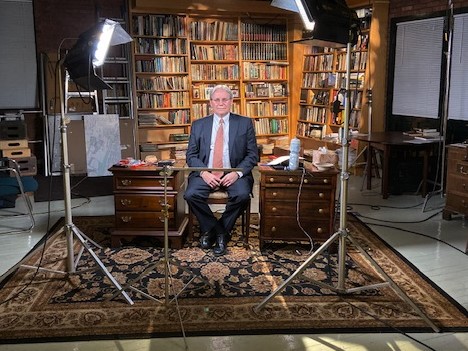 Wow Professor you are on a roll, Houston, Austin, and now Tucker all in one week!
I am so glad he brings you on for expert legal and political analysis, the entire nation benefits from
your knowledge and insightful commentary!

I saw the segment. Great job Professor. Please keep up the good work, whether on this blog or on the television.

Ditto. You’ve been on Pocahontas’s case since day one. (Looking down the list of Dem prez candidates, it’s hard to see one that’s not going to self-destruct if he/she gets the nomination. Joe Biden – son Hunter, Ukraine, China, getting forgetful. Bernie Sanders – heart attack, 78 years old (?), old-time socialist. Kamala Harris – can’t hold her own on the debate stage – can’t break single digits in the polls. Pete Buttigieg – slick, glib, but just 37 years old; mere mayor of a small city of 100,000; married to another gay man (how many I’s and evangelical Christians will vote for him?)….Are they going to settle on someone who was mostly unknown before the primaries….like Andrew Yang, Tom Steyer, Tulsi Gabbard…?

It sure looks to me like the primary is setting up for brokered convention. Right now, Fauxcahontas and Bernie combined are polling way ahead of Sleazy Joe who I am convinced is just a place holder for Hillary. Hillary would probably draw most of Fauxcahontas’ electoral delegates which combined with Sleazy Joe throwing his to Hillary, would secure the nomination for Hillary.

That “You don’t have to do this, Joe.” comment by Obama is worth contemplating. Is Biden the sacrificial lamb for Hillary? Destroying his legacy for the entire family for Hillary?

Who they nominate is largely irrelevant. The MSM, acting as the Ds publicity arm, have pursued a strategy aimed at demoralizing R voters. Trump never got the “honeymoon” most presidents get. The Schottenstein Center (affiliated with Harvard), found that in Trump’s first 100 days his media coverage was 92% negative. That’s not even in the same universe as coverage other presidents get (largely because Comey gave the Ds/MSM what they needed to push the Russia hoax).

The fact is that Trump only won by about 150,000 votes scattered around 3 or 4 states. The MSM does not have to persuade ANY of them to vote for the D for the MSM backed candidate to win. They only have to demoralize less than 1% of Trump voters in those 3 or 4 states to stay home or not vote. Do that and the MSM candidate wins – assuming MSM voters are energized and turnout in the same percentage they turned out in 2016. Does anyone think MSM voters are not energized to turn out?

Look at Michigan. About 4.8 million people voted for president. Trump won by about 10,000 votes. But there were 80,000 people who voted in down ballot races who left the presidential line blank. How many of them didn’t really like Trump or the MSM backed Hillary, but would have preferred Hillary if they thought Trump would win? The media portraying Hillary as virtually certain to win probably hurt her in Michigan. But that’s not my point.

My point is that nobody has to switch their votes for Ds to win. The MSM/Ds only have to suppress the Trump vote by a small margin to win. That’s the whole point of the impeachment farce. Trump will not be removed by impeachment. The point is to create the impression of wrongdoing with endless media coverage and hope that a tiny percentage of Trump voters will not vote for him. A couple of percentage probably aren’t paying close attention to how farcical the impeachment thing is, but they hear the word “impeachment” thrown around every day. The goal is to manipulate them. Make them feel guilty if they vote for a guy the MSM says their partners, the Ds, want to impeach.

notamemberofanyorganizedpolicital in reply to MaggotAtBroadAndWall. | October 18, 2019 at 11:19 am

I don’t see it working so far. I am surrounded by the nuttiest of nutty libs and even they are fed up with the impeachment hoax. There is simply no excitement on the Dem side.

Besides, none of these candidates will be anywhere near as effective a candidate as Hillary was in 2016. And she is far less popular today than she was then, The entire country is tired of the status quo uniparty politics. And as we’ve seen at first with Kaepernick and now especially with Emperor LeBronda, voters are NOT ready to trash the US.

So IMHO, the Dems are playing in their own sandbox of self-delusion. Hillary brazenly stole the nomination in a rigged primary in 2016 and Dem voters have not forgotten. There are very few left who still believe that won the election were it not for voter fraud. For her to again be the nominee and campaigning that she will again defeat Trump is beyond farce. So if this clown car circus is ultimately about Biden sacrificing himself to secure the nomination for Hillary in a brokered convention, the 2020 Hillary will get skunked in the election. The left will have a nervous breakdown.

Paraphrasing an old Latin aphorism: False in one thing, false in everything.

Warren also repeatedly said on the stump in 2011 that her father was a janitor when he had his heart attack. He was not. He was a salesman for Montgomery Ward. Now she almost exclusively refers to him as a janitor. Makes for better copy. She is pathological

I wonder if she has a “Little Red Book” and is ready for “The Great Leap Backward”. So is Liz “You didn’t build that” Warren a

As Warren keeps working her lies, the facts don’t change. She can’t seem to tell her story truthfully so maybe she doesn’t have anything worthwhile to run on. Shows perseverance with the facts pays. Even the Boston Globe is hedging their support so Warren’s moment in history will likely be fleeting.

(Don’t let the glamorous studio settings get to your head Professor! We don’t want to start hearing stories of “No green M&Ms!” demands.)

You do know that the “no green M&Ms” (it was actually brown M&Ms) demand was actually “crazy like a fox”, right?

Van Halen included the “no brown M&Ms” clause specifically to verify that the venue had paid attention to the details of the rider! It being nearly impossible to verify everything (some of which were safety related), the lack of brown M&Ms gave them an instant sense of the professionalism of the staff.

I know about Van Halen but I believe it was the Rolling Stones (Led Zeppelin?) that made the “No green M&Ms!” demand first.

Fauxahontas entire career is built out of one lie after another,why would any thinking reasoning person contemplate voting for a proven Marxist liar.

That’s precisely why I hope she gets the nomination.

notamemberofanyorganizedpolicital in reply to RITaxpayer. | October 18, 2019 at 1:57 pm

Can you imagine the ads the GOP would run against her?

If Fauxcahotas was 1/1024th native American that means her single ancestor contributed that DNA 10 generations ago. At 25 years per generation and her age circa 1700. No Cherokees in Oklahoma, no Oklahoma back then.

notamemberofanyorganizedpolicital in reply to Observer. | October 18, 2019 at 11:16 am

The United States Indian Tribes have made it a crime for any of their tribe members to donate their DNA to those DNA data banks.

I think I remembered that right.

Nice job, Bill, all leftists need to be thoroughly vetted. Think of it as ‘political security’ *for the children*.
It’s the least we can do.