The Democrat nomination is there for Michelle’s taking, if she wants it, with only Biden and Sanders polling near her. 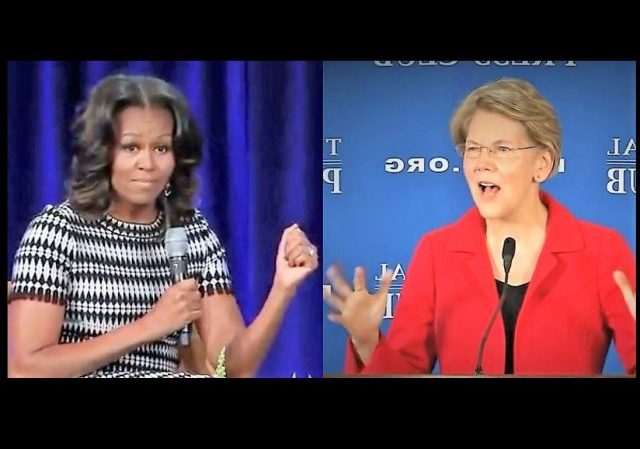 I’ve been writing for a long time about a Michelle Obama run for President, despite her saying she doesn’t want the job.

My November 23, 2018 post summed up how we got here, Michelle Obama is the Democrat 2020 frontrunner, even if she doesn’t want to be:

Michelle Obama says she doesn’t want to be president.

Yet she probably is the only Democrat capable of uniting the Democrat Party around something other than Trump hatred. It’s not that she doesn’t hate Trump, she’s made quite clear she does.

But she would bring something else to the table for Democrats, the Barack Obama coalition and willingness of Democrats to put aside their ideological differences in subservience to a nominee.

Could any other present Democrat candidate unite the party like an Obama? ,,,,

The mainstream media would unite behind Michelle like nothing we’ve ever seen. Her candidacy would combine the slobbering media and Democrat love affair for her husband with the steroid of Trump Derangement Syndrome….

Michelle Obama may not want to run for president. And she may not want to be president. But despite those personal feelings, the clamoring for her will reach deafening proportions once Democrat primary season gets underway and Democrats take a look at the 25 people on stage and scream: HELP!

A poll just released show that Michelle is crushing Elizabeth Warren and all other Democrats with the exception of Joe Biden and Bernie Sanders. But that is against a backdrop of Michelle saying she won’t run — support for Biden and everyone except Bernie would gravitate to Michelle if she ran.

The latest McLaughlin & Associates survey has Sanders at 18 percent, Biden at 17 percent, and Obama at 16 percent.

The next Democrat is Texas Rep. Beto O’Rourke, at 11 percent, and then a fading Hillary Clinton, at 9 percent.

Some 16 candidates rank behind “Undecided” at 11 percent, which demonstrates that the race remains wide open. 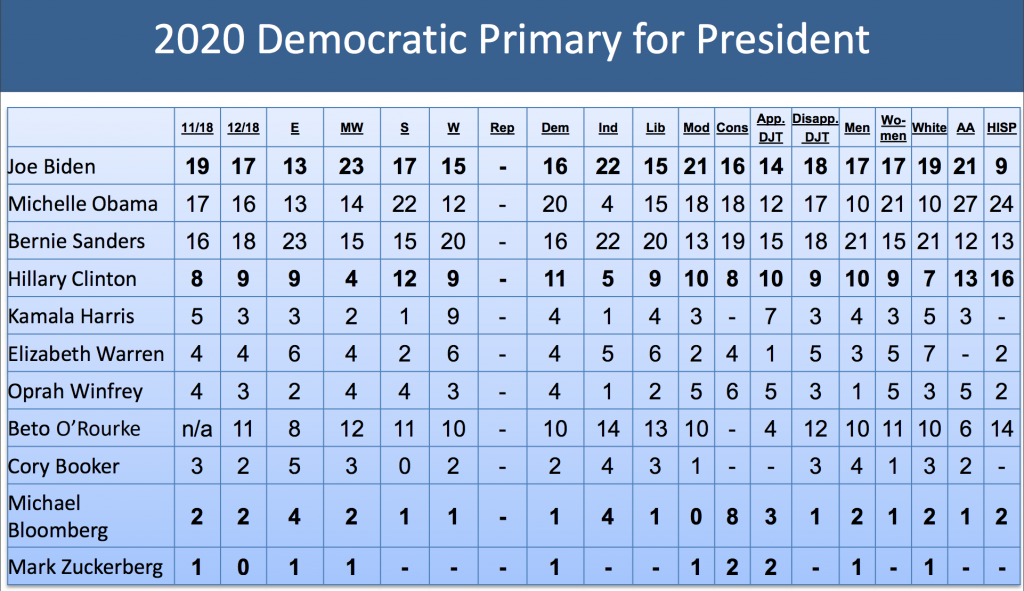 This polling confirms how far Elizabeth Warren has fallen, despite having, by all accounts, the most organized and well-financed campaign-in-waiting. Warren consistently now is in low single digits. The Boston Globe has abandoned her. Her key political advisor is flirting with Beto. Her longtime supporters are feeling depressed by her DNA rollout disaster. In an act of desperation not contrition, Elizabeth Warren recently admitted that she’s “not a person of color”, leading a liberal black pastor appearing on Boston public radio to accuse Warren of being an opportunist.

Among Democrats expected to run, the race is between an aging goofball (Biden) and aging Socialist (Sanders). The Democrat nomination is there for Michelle’s taking, if she wants it.

How far our nation has fallen.

“It’s not that she doesn’t hate Trump, she’s made quite clear she does.”

She is probably worse than Hillary, guaranteeing that I vote for Trump.

“Earlier in my college career, there was no doubt in my mind that as a member of the Black community I was somehow obligated to this community and would utilize all of my present and future resources to benefit this community first and foremost.”

She was and is a Black Racist. Think of the combination of that with being a Socialist/Communist and getting Barack with the arm of George Soros up their back to read that Joker’s prepared garbage for 4 years.

We’re headed for another Civil War if we soon don’t get Equal Justice Under the Law and see some indictments and prosecutions of Team Obama members and Deep State Traitors.

Mark of the beast – literally.

All the fashion crap in existence does not change the fact that Michelle Obama is hideous inside and out.

As long as it does not involve Hillary… or O’Biden.

With Trump rolling up the wins and poised to settle with China on the trade war, he may be heading to an easy re-election bid. Now add the border wall and it just gets better.

Some of his wins don’t even get reported. Two weeks ago, China agreed to lower tariffs on American autos from 40% to 15%. That is a MAJOR concession. Don’t they know that no one wins in a trade war (nyuk, nyuk)? Confirms how desperate China is for a trade deal.

I think Michelle will wait until the last minute and decide not to run. Being a shoo-in for the nomination with the Democrat party is total disarray is not exactly a tantalizing opportunity. Were she to get crushed in the general election, that would be the end of her ambitions. She’s not running.

“The Democrat nomination is there for Michelle’s taking, if she wants it.”

Hillary part 2. Michelle doesn’t have the charisma or intelligence the media claim she has. Her experience with politics is almost non-existent. Mostly it involves watching her husband campaign.

Talk about an oxymoron.

She’s already practicing with the teleprompter.

People forget how the ex-pres spent 8 years reading his lines – and how dumb he sounded when he had to think on his feet.

The media will let her do the same thing – but her arrogance and meanness will show through.

How I would like a world where no election information existed until 6 months before the election. As Rhett Butler said: Frankly, I don’t give a damn.

“The mainstream media would unite behind Michelle like nothing we’ve ever seen.”

I disagree. We’ve already seen seen the media’s cult of personality for Hillary! and Obama. Deranged hatred of Republican candidate Fillintheblank is a standard feature of President elections in my lifetime.

What you WILL see in 2020 that is unprecedented are:
1. Deplatforming of Republican candidates on a massive scale.
2. Voting fraud at Third World thugocracy levels. We have already had a taste of it in Arizona, Wisconsin, and the People’s Democratic Republic of California.
3. Antifa-led political violence aimed at terrorizing voters into not voting (or liquidating them if they do).

Oh, I dunno. Here in my state, 1 in 10 citizens Carrie’s a firearm publicly. If antifa uses violence, they will win the room temperature challenge

If Obama decides to run, Dems will be collapsing in the streets from ecstasy.

Sadly, she could be swept into the White House by the stupid Dem masses. Wouldn’t put it past them. And if we thought that hubbie was bad, brother we ain’t seen nuthin’ yet!

I still don’t think so. The Party won’t want her, and she won’t consider running as an independent.

The “woman’s vote” let the D’rats down badly in 2016. They won’t court it in 2020. Instead they’ll go for Old Reliable, the “black vote”. My reading is that that vote is not only almost totally racist, but it is also intensely misogynist. They’ll fall all over themselves for Barry, but won’t show the same enthusiasm for the wife. And I suspect the Party knows this. As a Presidential candidate, a black woman is a very high risk.

Of course voting along racist or sexist lines is grotesque. But were I a liberal, I’d probably still say that, though I wouldn’t believe it.

Which is why she’ll never run. She knows she could never live up to their expectations.

An America-hating black racist agitator for POTUS? No thanks. Been there, done that.

This is a distraction just like Oprah is going to run meme that turned out to be a joke. obama knows she hasn’t the credibility or intellect to be president. Her entire life is that of a privileged white hating black who knew the right people. Her husband enjoyed the exact same road and look at the mess he made.

Masculine-appearing woman, check.
Overpriviledged yet resentful, check.
Celebrity, check.
Only qualification is being married to a political celebrity, check
Tingle up Chris Mathew’s leg. Welll, if she’s busy it might make BHO more available.
I think we’re looking at the 2020 Democratic nominee, whether s/he puts the name in xerself or not.

Those who live in democrat states might be wise to register as a Democrat and vote for Biden.

Liberals will blow their loads if she runs.

I think she will…and Im buying stocks in popcorn factories so I can enjoy the spectacle of Hillary and Obama going toe to tow in the primaries! Its gonna be delicious.

The reason I think she will run is that she will not be able to withstand the attention running would bring her. Just like her husband she craves attention.

Once she had to actually open her mouth in public on a debate stage she would be carved into jelly.

Unlikely to happen. The only way Dems win in 2020 is to regain their unhappy voters that put Trump in office. In other words, everyone except the NE and SW coasts. She’s not the one.

Just think of all those students who grew up on her lunches voting.

Just think of the history: Not only was Barack America’s First and Worst, but this Socialist Duo could rival Juan and Evita Perón AND WITH SIMILAR DISASTEROUS RESULTS THAT TOOK ONE OF THE WEALTHIEST COUNTRIES DOWN TO LEVELS IT HAS YET TO RECOVER FROM. Demtards just love “Firsts” and bad decisions be damned.

Hey, how about that South African white genocide, huh?

If this is true, then it’s time to break out the pix of Michael as he really is. Hopefully, this will suffice to save our country.

Yes, well, I wouldn’t worry overmuch. When it comes to these two, their charisma is in negative integers when it comes to people that AREN’T their cultists. The chance of either succeeding to the Presidency are essentially nil.

JJ Sefton, over at AOSHQ, has the perfect campaign slogan for Michael Obola: “Let The Wookie Win!”

just think of how woke have the First Transgender as POTUS will be!

If wookie keeps wearing those Elton John boots and dressing like she weighs 200 lbs, she’ll definitely appeal to a lot of the low-IQ Dems.

Not surprising the front runner is someone who doesn’t want the job. Anyone stupid enough to want lead the Democrats has to be someone nobody could want.