Black Pastor: Elizabeth Warren used “a black optic to subvert attention away from how she really botched the Native American narrative”

Black Pastor: Elizabeth Warren used “a black optic to subvert attention away from how she really botched the Native American narrative”

Regarding Warren’s Morgan State speech: “She’s an opportunist … She’s pimping, and this is how she’s pimping: She’s using a black optic to subvert attention away from how she really botched the Native American narrative.” 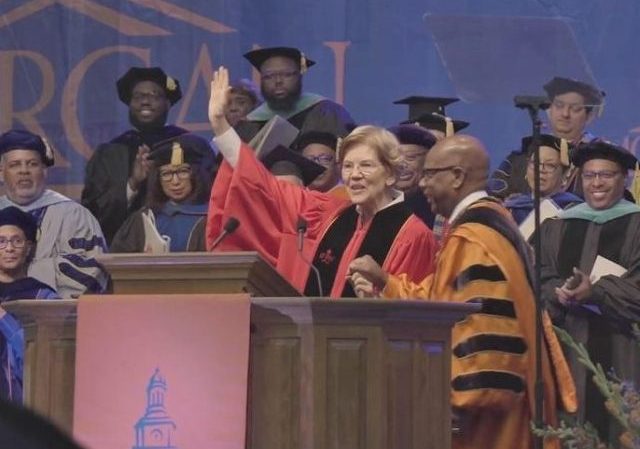 Elizabeth Warren is trying to dig herself out from the hole she created with her false claim to be Native American for employment purposes and her inept 6-year long cover-up.

In particular. Warren’s October 2018 rollout of her DNA test is almost uniformly viewed as a strategic error that has seriously damaged her presidential prospects.

On December 14, 2018, Warren gave the Commencement speech at Morgan State University, a historically black college. Warren used the occasion as an outreach to blacks, declaring her solidarity even though she herself was “not a person of color.”

Here the key passage from the prepared text:

Sure, there’s a lot more going on-educational disparities, a broken criminal justice, access to credit. I picked just one example-housing-but as a country, we need to stop pretending that the same doors open for everyone. Because they don’t.

I’m not a person of color. And I haven’t lived your life or experienced anything like the subtle prejudice, or more overt harm, that you may have experienced just because of the color of your skin. Rules matter, and our government-not just individuals within the government, but the government itself-has systematically discriminated against Black people in this country.

Ultimately subprime mortgages spread far beyond communities of color, and it eventually wrecked our economy.

That’s how a rigged system works. And that’s what we need to change.

The speech was widely scorned, in part because Warren has been touted as a woman of color for over 25 years, based on her false claim to be Native American. We documented this history in Elizabeth Warren finally admits she’s “not a person of color”.

But nowhere was the scorn more severe than in a radio segment on WGBH, Boston Public Radio. You can listen to the audio here (no embed code available).

The interview was with two black pastors, Reverend Emmett Price III and Reverend Irene Monroe., or are weekly guests on the All Revved Up program.

I haven’t found a full transcript, but in its writeup, WGBH reported on these comments by the two guests, All Revved Up: Elizabeth Warren Had The Wrong Place, Wrong Time, Wrong Message:

… “I’m not a person of color,” Warren said during the speech. “And I haven’t lived your life or experienced anything like the subtle prejudice, or more overt harm, that you may have experienced just because of the color of your skin. Rules matter, and our government — not just individuals within the government, but the government itself — has systematically discriminated against black people in this country.”

But was she the wrong voice to speak that message?

“Wrong audience, wrong time, wrong way, wrong matter,” Reverend Emmett Price III said in an interview with Boston Public Radio Monday. “You don’t go to an HBCU in the height of a [racial] crises … and try to come off as the great Intellect.”

Price and Reverend Irene Monroe joined Jim Braude and Margery Eagan on Boston Public Radio for their weekly All Revved Up segment to discuss Warren’s speech.

“She’s an opportunist,” Monroe said. “She’s pimping, and this is how she’s pimping: She’s using a black optic to subvert attention away from how she really botched the Native American narrative.”

Later in the interview Monroe said Warren should just apologize.

No, more than that: Resign from Senate, move to Greenland, stay there until further notice.

Yes, enough with the ‘apology’ crap.

notamemberofanyorganizedpolicital in reply to TheFineReport.com. | December 19, 2018 at 2:48 pm

She should be made to repay all that wrongfully obtained benefit over the past several decades…..

To apologize, she would have to admit at least to herself that she was wrong. She isn’t capable of that.

Any apology should come with a big check written to the Colleges she scammed out of Financial aid.

The only way she might be able to come out of this whole mess, and still have a shred of decency about herself, is to come clean. Admit that she intentionally set out on a course to build her professor career, jumping from one law school to betters ones, using the frail shoulders of those ridiculous family fables that distant relatives walked the Trail of Tears. She’ll have to admit that she knowingly played the AA game, which hit big strides in the 80s and 90s, after she saw an opportunity exploiting a Cherokee angle.

As part of coming clean she would authorize all pertinent law schools to release relevant docs and she would explain what she did and how her plan was to work.

My money says that she can’t bring herself to do it. The humility that will be required to square the corners of her life/career will simply prove to be too much to bear. Of course her reach for being a POTUS is utterly gone, but so too might be her position at Harvard which was obtained by fraud.

Failing to go full bore will mean that this ugliness will travel with her like a second shadow, including in her obituary.

here really needs to be a 12-step group for politicians, but I guess that finding one of them with an inkling of humility to start it would be near impossible. They already have a coffee pot, and certainly no shortage of resentments.

Calling Fauxcahontas a “pimp” is an insult to pimps.

At least pimps provide something of value to payers, regardless of how dubious of the product.

“Ultimately subprime mortgages spread far beyond communities of color, and it eventually wrecked our economy.”

Oh what a relief. So we don’t have to blame it on financially underqualified persons of color not paying their bills—we can still blame it on Whitey.

For a second there I thought she might say something just a bit un-PC.

She’s a member of the Pro-Choice Church, selective, opportunistic, and politically congruent.

Okay, we know what she’s ‘pimpin” these Children of God for. What are they pimpin’ her for?

She’s trying to avoid looking so white by surrounding herself with black people. Really?

You can be sure she’s been collecting wampum on that claim.

Seeing how mankind originated in Africa everyone can claim their African heritage. In fact if everyone did this it would eliminate racism as everyone would be the same race. No longer would race pumps be able to blame racism for every problem on earth.

Mankind originate in the Middle East.

Warren’s aptly name, as she went down one and is having a heck of a time finding her way out.

Warren, is the “perfect” Libtard candidate…..”liar”, oppertunist, liberal puppet, simply does not have an “origional idea”, & will do & say anything to get elected……She’ll fit right in t the Libturd party!…..{ Just like Lying Hillary, & Slick Perverted willie, & Bath House Barry}……run her, & watch her “fade away!”…..America will not elect a Socialist!…{ Bernie…..”GO HOME, & GO BACK TO SLEEP”}…..WHAT A BUNCH OF LOSERS!

It’s the “wrong place, wrong time, wrong message” part nails it. For decades, she falsely claimed to be Cherokee and entitled to privileges set aside for real Cherokee who actually belong to a tribe. That tribe challenged her claims and she wouldn’t even talk to them.

So now, she is pandering to a black assembly as “not a person of “color” (how about “Cherokee”?)”, far too late to fix the damage, and pandering to any feelings of resentment they may be harboring by admitting that she has never experienced black discrimination. Even if she had apologized, it was to the wrong audience. But she still hasn’t apologized. She just admits making a “tactical error). Not even the prerequisite crocodile tears.

Reverend Emmett Price III said in an interview with Boston Public Radio Monday. “You don’t go to an HBCU in the height of a [racial] crises …”
Um…what racial crisis? The one started by The Great Healer Barack H. Obama?
I have seen so many examples of black men and women rising above victim-hood to achieve as much success and much more than a lot of people putting THEMSELVES into the upper tax brackets because of their determination to be a good man, a good husband, a good father, a good earner and worker, a good business person. They didn’t let stupid prejudice or racism get in their way.
There was no crisis for them.