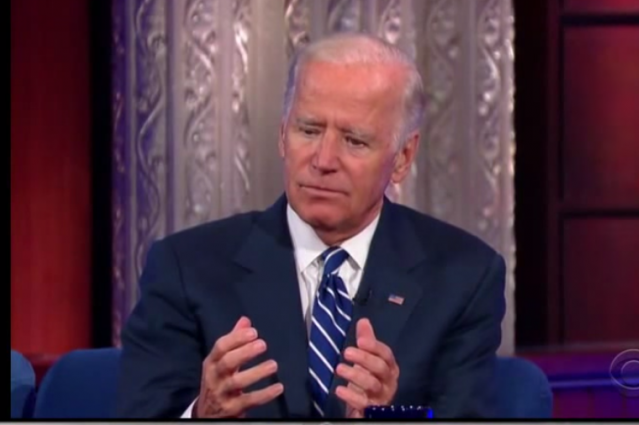 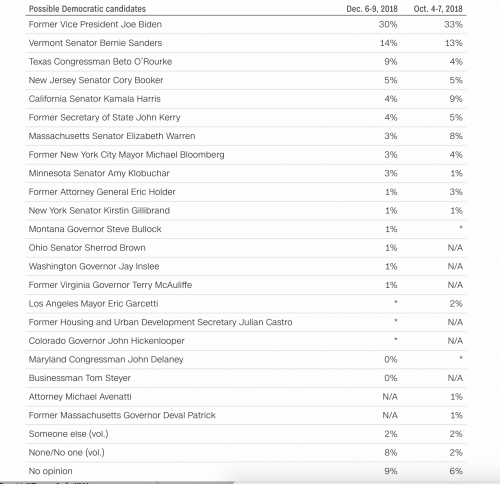 CNN noted that it’s hard to grasp what the actual numbers will be since we’re still months away from debates and primaries and hardly anyone has declared their intention to run. After all, look at the numbers in the GOP primary in 2014:

Only Maryland Rep. John Delaney has declared he will run for president. He sits at 0% in the CNN poll. Former Secretary of Housing and Urban Development Julian Castro (who scares me more than Hillary) said he will form an exploratory committee. I don’t even see his name on the poll so hopefully he goes nowhere.

Rep. Robert O’Rourke (I refuse to call a white Irishman Beto), who failed to unseat Sen. Ted Cruz, changed his mind and said he hasn’t ruled out running in 2020. He’s the only one in the poll that made “significant gains” in the poll.

I rely on The Cook Political Report when it comes to elections. On Thursday, Amy Walter wrote a piece titled “A Most Unpredictable Road to the 2020 Democratic Nomination” because she doesn’t have any idea what will will happen since “[T]here are simply too many unpredictable factors involved in the nomination process this time around to feel confident about any predictions this far out from the nomination.”

First of all, The Cook Political Report has 30 serious potential candidates for the 2020 election. If all 30 of these candidates declare then how will the TV stations fit everyone on a stage? I know stations have held two debates, one for the top tier and another for the bottom tier. Walter wrote:

There’s no way to cram all 15-20 candidates on stage, so how the networks determine which 5-6 candidates are invited to their debate/forum/townhall? By polling position? Randomly? By height? By age? (Tonight, on MSNBC, the battle between Gen X and the Baby Boomers!!). Maybe they can use the old-school Hollywood Squares set to pack more candidates into one easy camera shot?

Also, who’s to say that the old-line TV folks get all the action? Why not an ActBlue/DailyKos sponsored forum that is streamed online? The Pod Save America dudes HBO platform will also be a tempting venue.

This also means more pressure on campaigns to pick and choose wisely. While a viral moment from one of these events may vault a third-tier candidate to instant stardom, it’s just as likely that these time-sucking affairs keep candidates from doing the all-important (but less glamorous) spadework of fundraising and campaigning. Oh, and most of them have day jobs to focus on too.

We have a long way to go and who knows what will happen. After 2016, it’s hard to take anything seriously.

Beto’s not #1? I mean Robert Francis O’Rourke, the new Obama? Who wants creepy Uncle Joe in the White House when you can have Skateboard Jesus. Actually who wants any of these clowns running the country, but that’s another story.

notamemberofanyorganizedpolicital in reply to MattMusson. | December 14, 2018 at 4:31 pm

“Can’t Keep His Hands to Himself Uncle Joe”

works as in “Uncle Joe” Stalin too………

After 2016, it’s hard to take anything seriously.

Not at all. It was very predictable, and some did indeed predict it, and for perfectly good reasons. If you want worthwhile prognostications, look first to someone who got 2016 right, and ignore those who didn’t. Like, say, the Cook Report.

Only four candidates beat the “margin of error”? That means tied with everyone else for fifth place, I’m still in the running! I think I can do this.