From #WalkAway to McCain-Palin, from Russia to “woke” BK and Twitter 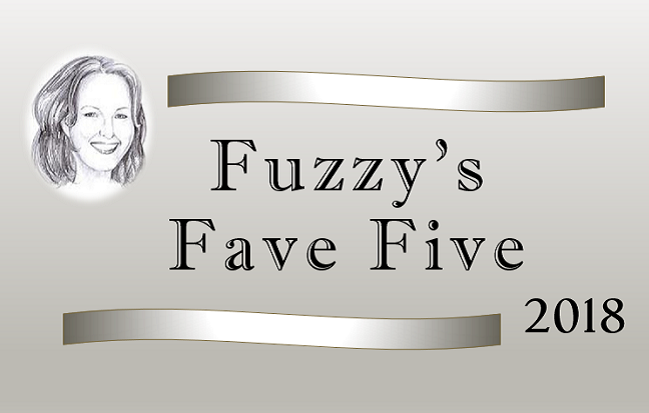 It’s become something of a tradition for LI authors to post a list of their favorite posts for the year (you can read my 2016 list here and my 2017 list here), so it’s that time of year again, and I have some favorites to share with you all.

What happens when a movie-star-gorgeous gay hairdresser goes from SJW-zombified “woke” leftist to a conservative on “a mission to #RedPill humanity”?  Why, the #WalkAway movement, of course. 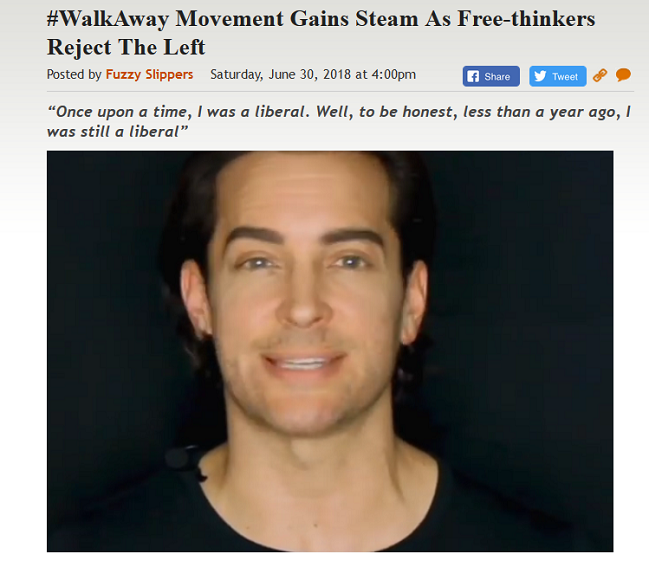 It’s worth noting that this is the type of movement that the now-openly-socialist Democrats cannot abide and work very hard to discredit (as they did with Candace Owens’ #Blexit).

I was incensed upon hearing this because it seemed clear to me that his nomination of Palin as his VP breathed new life into his dying (already dead?) presidential campaign.  His petty expression of regret at selecting her coupled with his apparent belief that a McCain-Joe Lieberman (D/I-CT) ticket would have beat Obama in ’08 was, quite frankly, bizarre.  I had to respond. 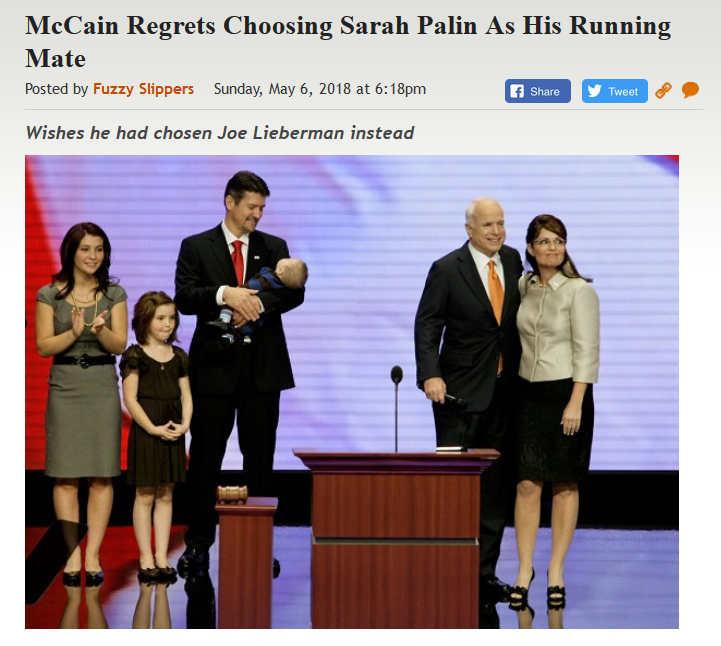 My sense of his pettiness was reinforced when we were informed that Palin, his former running mate and staunch supporter even after their 2008 loss, was explicitly not invited to his funeral.

As we survey the division, hate, and fear that seems to have pervaded our nation, we need to take a closer look at our near communities.  Are we really all seething in rage and hatred towards our fellow Americans when those fellow Americans are our neighbors and respected members of our communities?  Probably not, but that’s what we’re supposed to internalize.  No matter who you are, everyone is the “enemy” . . . except the Democrats.

The benevolent Democrats are so loving and accepting of you that they want you to be isolated from all other Americans, they want you to live in an atmosphere of constant fear and resentment, and they want you beholden to them in every conceivable way.  How can a woman/minority/LGBT alphabet soup person possibly live a fulfilling life without Democrats telling them they are socio-cultural economic and political pariahs, perpetual victims who must be “protected”?

This lie permeates our culture . . . extending even to Burger King ads.  Women, we are informed, are too stupid to assess the relative worth of a “pink” and “blue” product and must be protected from our own ignorance.

This is the basic gospel of the left:  you are a stupid stupid person who must be protected from yourself by the all-knowing state who has only your best interests at heart . . . .  Shhh, don’t worry if your best interests don’t mesh with or even directly undermine the best interests of other favored groups because intersectionality. 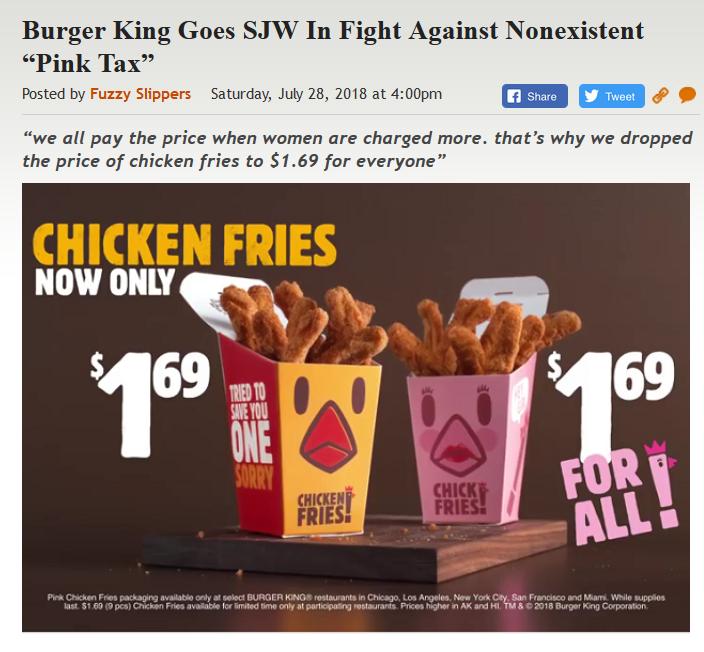 Remember when Ellen DeGeneres, Ellen Pompeo Make The Right’s Argument On Wealth Creation?   I’m not sure if the two Ellens were officially sanctioned for promoting the free market and capitalism, but their conversation debunking the socialist/communist myth of limited wealth still stands out in my mind.

We keep hearing about Trump-Russia collusion and the “stolen” 2016 election, but who was sitting in the White House throughout the 2016 election season, a season that stretched back to at least 2015?  Oh, right, Obama. 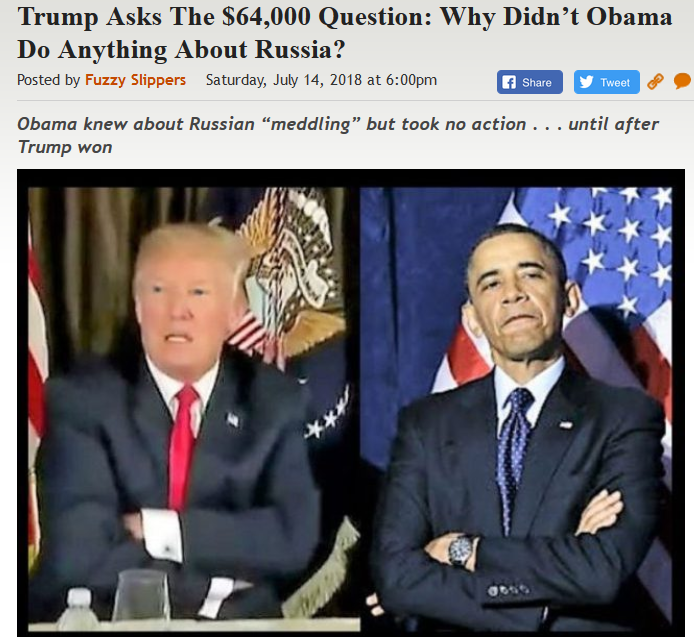 #1  Twitter: No, We’re Not Shadow Banning The Conservatives We’ve Shadow-banned

This is the story that will dominate 2019: Big Tech/Social Media and its relentless attack on conservatives. 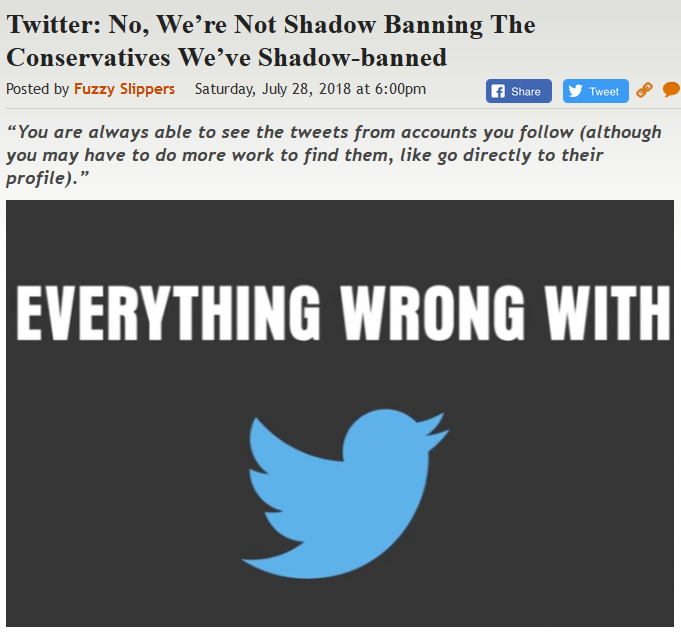 It may have started with controversial fringe figure Alex Jones, but as the prof wisely noted, it has not stopped there.  The great conservative deplatforming purge is just starting, and it won’t end with conservatives and the right.

Ben, of Ben and Jerry’s ice cream fame and fortune, coordinated a “name the ice cream for seven up and coming progressives” effort with MoveOn.org and got far more than he bargained for as helpful conservatives responded with amazingly insightful, amusing, and snarky progressive ice cream names.   LI readers added some great choices to the list, so be sure to check out the comments. 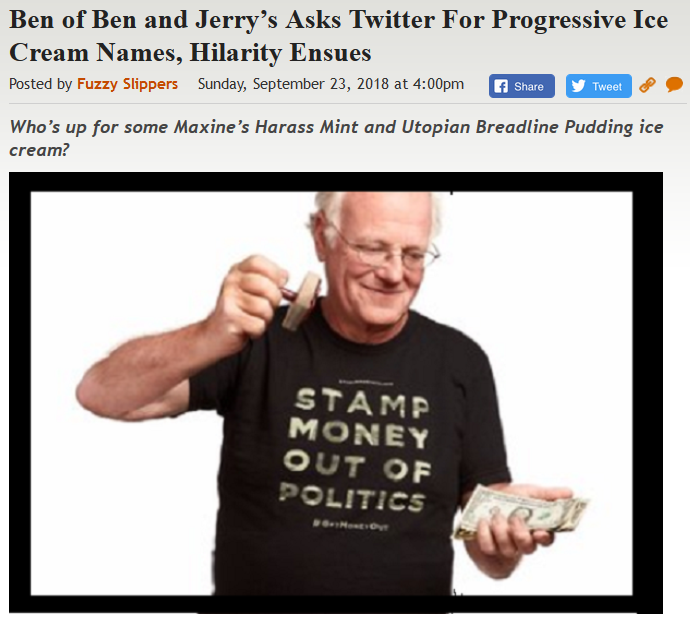 I always look forward to your posts! In particular, those where you defended yourself, other commenters and the blog as a whole from ad-hominems, profanities, and general verbal abuse of the intellectually vapid.

Heh, just noticed you’ve already collected a downvote from the “intellectually vapid” you know who…

May your 2019 be fun and prosperous, Fuzzy. I think you’re in NC. We might be neighbors!

Hey snopercod, we may not be neighbors in NC, but we are in every other way. 🙂

I confess. Fuzzy is my favorite weekend editor.

How sweet, loco! And you are certainly my favorite loco LI commenter!

Happy Holidays to you and the entire Slipper family.

Why thank you so much, Fine! I wish the same for the whole Fine family. 🙂

While I have time, I thought I would wish Fuzzy and everyone a Happy New Year and collect my last “down twinkle” of the year.

Happy New Year, Phil. May big hugs and many down twinkles pepper your 2019 with peaceful love and positive reinforcement. 😉

Thanks for everything Fuzzy, and you too Professor. While you seem to have shut down the Forum for good reason, I do miss the exchanges by everyone except for he who shall remain nameless.

Thank you, Carl, for your well wishes, and a Happy New Year to you and yours. 🙂

Fuzzy, prof, et al. Happy New Year! Thanks for all you do to make this a great place to hang out.