Anything but inclusive, unifying, civil, or respectful 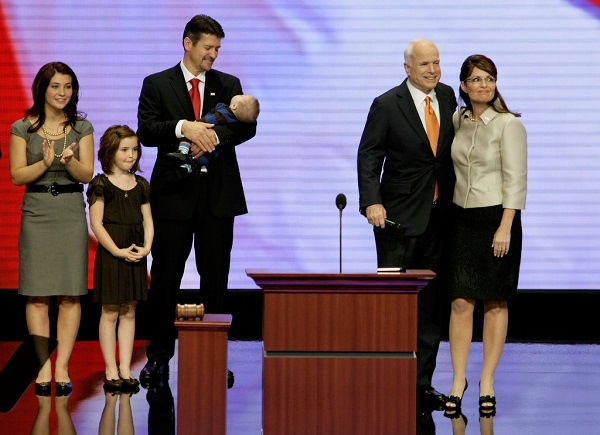 When I first heard that Senator John McCain (R-AZ) explicitly stated that he did not want President Trump to attend his funeral, I was taken aback not only by his petty smallness but by the abrupt change of tune since his insistence that Obama be treated with respect simply because he occupied the Office of the President of these United States.

Asking President Trump not to attend was an extraordinary request because the lack of invitation to the sitting and duly-elected President to read a eulogy at the funeral would have been a significant rebuke.  And more than sufficient.  McCain chose the low road.

Even more surprising is the pointed exclusion from his funeral of former Alaska governor and his 2008 running mate, Sarah Palin.  Palin, whom McCain called in his 2008 concession speech “an impressive new voice in our party for reform and the principles that have always been our greatest strength,” quite literally breathed new life into his lackluster presidential campaign.

Had he not reined her in, he could well have beat Obama in ’08, and had she not endorsed and relentlessly campaigned for him in 2010, he may well have lost his Senate seat.

When it was earlier this year revealed that McCain regretted choosing Sarah as his running mate, I made the following observations:

Before making his announcement of Palin’s addition to his ticket, McCain’s campaign was stalled.  He was doing everything wrong, and there was no enthusiasm at all among Republican voters. President Bush, you may recall, was leaving office with truly abysmal numbers: at one point, his approval was just 25%.  McCain, though he tried to distance himself from Bush, was tied to him by his own voting record in the Senate.

Between his campaign bleeding aides and even his campaign manager and his confounding refusal to address Obama’s many many weaknesses and scandalous associations, McCain was on the fast-track to an historic drubbing.

It wasn’t until McCain named Palin as his VP that he took the lead against Obama for the first time.

. . . . Palin was frustrated with the McCain campaign because after she injected a much-needed boost they refused to let her speak her mind about Obama.

In 2010, Palin went out on a limb—flouting Tea Party supporters—and endorsed McCain’s Senate run.  She also went on the trail for him in Arizona, speaking to vast crowds, and doubtlessly earning him much support on her name alone (as she had in ’08).  Though she was no longer as popular or as powerful in 2016, she again chose to endorse McCain’s zillionth Senate run.

Despite her years of loyalty, however, McCain chose to exclude her from his funeral.  People broke the story:

“Two names you won’t see on the guest list: Trump and Palin,” says a Capitol Hill source with knowledge of funeral plans for McCain, who died of brain cancer Saturday at age 81.

“Invitations were not extended” to the two political figures, confirms Carla Eudy, a fundraiser who has worked with and been friends with the McCain family for decades.

. . . .  “Donald Trump and Sarah Palin were not served official notice outright,” says the source close to the McCain family. “I want to make that clear. It wasn’t a no-trespass order. They won’t be turned away by guards if they show up at the funeral.”

The stay-away messages were sent through intermediaries, the friend tells PEOPLE.

While we know from reports predating his death that McCain explicitly intended to exclude President Trump, it’s not yet known if he made the stipulation that Sarah be excluded.

The People report does suggest that the “request” to exclude former 2008 campaign staffers may have come from the family.

A source with knowledge of the funeral arrangements adds that several longtime McCain staffers were also removed from the invite list in recent days by Eudy.

The fundraiser, who helped plan the memorial services, did not specifically address where the requests originated, nor how they were conveyed.

Speculation in Washington, D.C., is that they came from “the family.”

“My guess is, it came from Cindy,” says a source close to the McCain family. “She is very protective of John’s memory and legacy. She’s also a grieving widow. I think she wants to get through this as best she can.”

Meanwhile, former presidents George W. Bush and Barack Obama are busily fine-tuning their eulogies for McCain.  These will be delivered Saturday.

Obama’s former vice president Joe Biden has already delivered his eulogy as part of the four-day extravaganza McCain painstakingly prepared in the months leading up to his death.

“My name’s Joe Biden,” he opened as he took the podium. “I’m a Democrat, and I loved John McCain.” In a eulogy at his Arizona funeral, former Vice President Joe Biden gave deeply moving testimonies about the late Sen. John McCain – sometimes a political opponent and always a lifelong friend.

One standout from Biden’s remembrance: the “McCain code.” “It wasn’t about politics with John. You could disagree on substance,” Biden said. “It was about the underlying values that animated everything John did.”

Biden also spoke of the senator’s call for civility and respect in the era of partisanship and divisiveness. “John believed so deeply and so passionately in the soul of America,” the former VP added. As for their personal relationship, Biden called McCain a brother, and, yes, that means they “had a hell of a lot of family fights.”

Somehow McCain’s exclusion of President Trump and of Sarah Palin doesn’t quite speak of inclusion, civility, respect, or of a passionate belief in the soul of America.  But maybe it’s just me.

The late Sen. McCain was a nasty, loathsome human being. Despite his generally wretched character, did he do some good things in his life? Yes, he did. Are there people who loved him? Again, yes. I am genuinely sorry that he suffered; very few people are so horrible that I would wish suffering upon them, and the late Senator was certainly no Hitler (I could make an exception for him). I am also very sorry for those who are grieving his loss. But I am not going to pretend that he was some kind of a saint and am seriously fed up with the constant lionization of a man who was, really, more than a bit of a turd.

Ah, those McCains. A class act to the end. I wonder which one is going to be appointed to the hereditary McCain seat in the Senate?

Actually, his wife Cindy seems to have the inside track.

Do you really have to ask? The Gov. is going to appoint his wife, a political weakling who is going to flub the election in two years when the Dems throw their entire heart and soul into a howling screechfest attempt to overthrow the dictator Trump.

Personally, I always felt that the McCain-Palin ticket was upside down; Sarah would have been a much better POTUS. And they might well have had a much better chance of prevailing if she had the top spot instead of him.

There was a time that I considered J.F. Kerry lower than whale scat. At the time I had nothing but respect for McCain.

From the experience of the last few years I now consider Kerry = McCain.

McCain – despite Trump’s snarky put down – was a hero. Not for being shot down, but for his refusal to accept early release from horrific captivity because of his being the current scion of a military dynasty.

That said, he became a nasty piece of work. Trumps major malfunction is an ego the size of a US state, and Senator McCain suffered from the same fault. McCain ran as a conservative War Hero every election, but tended to vote not to fulfill that election promise, but to be lauded by the press and non – conservatives (BIRM) as a mavarec who was acceptable to be invited to all the good dinner parties and media interview shows.

It must have been a bitter (yet inevitable) betrayal when he found out whilst running for president that his “friends” across the aisle and in the press (BIRM) had no problem treating him as the second coming of slavery (Whopi Goldberg) and every other Bad Thing the Dems like to smear Republican candidates with when his turn in the docket came.

Then even more bitter to find himself – whose self-image (reinforced by all those dinner parties) was of an experienced War Hero statesmen beloved by everyone – being thrashed in the polls by an inexperienced newbie with no record to speak of – that his cross-party “friends” acted like he had a venerial disease and his own party’s voters mostly went “meh” when asked how they like him.

Desperate, he brought in his own “inexperienced newbie with no record to speak of” but who had checkboxes (female, conservative, well-liked in the party) he lacked to offset Obama’s big checkbox (He’s black, jim) and it was working. Until….. Ego the size of a US state time.

Palin faced the usual Dem smear campaign, and the McCain loyalists running the show responded with…. Inaction…. Because from McCain on down they were in a snit over the new co-star being more popular than the supposed main star, like any Hollywood drama queens.

For just the most egregious example, they sneered at her family’s lack of designer-looking outfits, told her to re-outfit everyone using campaign funds so they wouldn’t look like rubes, and then rather than admit THEY gave her bad advice threw her under the bus as “corrupt” – when the very lack of corruption was the reason for her and her family’s wardrobe not consisting of $10.000 suits and dresses like the good Senstor’s closets were stuffed with.

But the burn for being overshadowed by his running mate led to the even more foolishness of ordering Palin to rein in her attacks on the opposition – the normal JOB of the VP candidate – so as to not make McCains continued “if you can’t say anything nice about Obama don’t say anything at all” idiocy not look so namby pamby in contrast.

I can well understand McCain’s last swipe at Trump by disinviting him – but disinviting Palin after she showed him nothing but support even years after the election loss was the act of a petty, petty man.