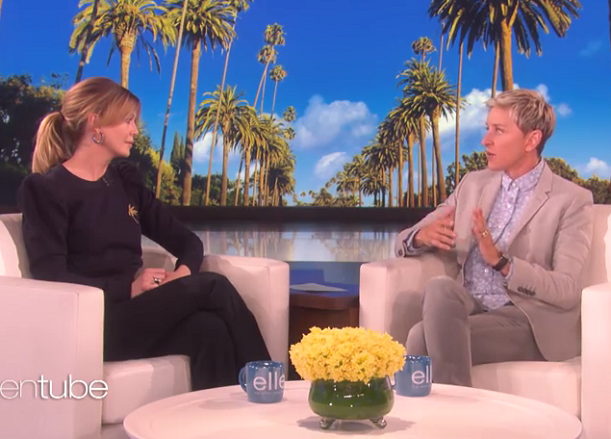 Cue Twilight Zone music.  I was flipping through the four channels my antenna picks up, and happened across Ellen, the daytime talk show hosted by Ellen DeGeneres.  She was interviewing Ellen Pompeo, who plays the title character Meredith Grey on Grey’s Anatomy, and they were discussing income inequality.  Imagine my surprise when the two Ellens began to sound like Bill Whittle on wealth creation.

The gist of their discussion was the departure from the show of two female cast members and the rumors that Pompeo’s salary was at the root of the problem: she makes so much money that there isn’t any left over for other female actors.  Pompeo says the rumors are untrue and declares that women should not bit pitted against one another.

The actress also spoke broadly about her T.H.R. essay, which revealed that she struggled for years to make the same salary as her former co-star Patrick Dempsey, even though she had a bigger role than he did. (Pompeo plays Meredith Grey—the show is named after her!) This struggle is common for other female stars—the producers of Netflix’s The Crown, for example, recently shared that Claire Foy, who plays Queen Elizabeth II on the series (the literal crown!), made less than her co-star Matt Smith, who plays Prince Philip.

“It’s important to be really truthful about our pain and our struggles,” Pompeo said of her decision to do the piece. “Sometimes you have to go through painful things to just be an example. We have a platform.”

She’s been “so shocked” at how many women have rushed to her in order to share their stories of inequity, the actress continued. “As women, we’re afraid to ask, we’re afraid to be vocal, we’re taught not to be,” she said. “They like us quiet, as we’ve seen from this administration. It’s really important to encourage each other, encourage other women. To stand up and be strong and know we’ll be O.K. and we have each other’s backs.”

And Pompeo also believes that it’s important not “to pit [women] against each other. We’re not enemies. We do lift each other up and support each other, and we’re not victims. We’re very strong and we’re capable of many, many things.”

This is all standard leftist feminist fare.  The Trump administration “likes women quiet,” and unspecified men oppress women, denying them equal pay and pitting women against one another.

Buried in the interview, however, is a fascinating exchange in which DeGeneres says that one of the things that causes problems for women in terms of equal pay and garnering support from other women is “coming from this sense of lack” whereby “if somebody has something, I’m not going to get it.”

She goes on to say that “there’s abundance, everyone can have whatever they want.  So just because you’re making a whole lot of money, doesn’t mean another woman is not going to make that money.”

Pompeo responds by noting that this “notion” that “because you have, means I don’t get” is deeply rooted and accurately notes that it “speaks to Civil Rights and equal rights” and that it’s “where racism and sexism is based.”

She then strongly asserts, “It’s important to unearth that [notion] and dispel it and to say that it is simply not true.”

Well, yes.  That’s exactly what we’ve been saying for fifty years, and it’s stunning to hear the argument made from the left.

Democrats have been feeding on the greed, envy, and resentment of a variety of “gimme” groups.  These groups have become convinced that they are victims of sexist, racist white male capitalists who amass all available wealth for themselves, leaving nothing for anyone else.

I’m guessing the both of them will be chastised mightily from the Left before Monday night.

that was supposed to be “blind”, but, in an odd way, “bling” kinda w*rks too.

There are two classes of people who parrot the liberal mantra of people being unable to get ahead because some people have too much money are either those on welfare who do not work for a living to begin with, or those who are independently wealthy can could live comfortably for the rest of their lives without making a single nickle. The other 45% of the population who has to go to work every day to keep food on the table and a roof over their heads never say that because it woulc limit their options. The rich do not believe this mantra, they simply parrot it. If they actually believed it, they would not be rich.

Remember how upset Whoopee Goldberg was when the Obama Administration raised her taxes?

Exactly. One of the reasons they parrot left wing idioms is because the entire Federal and State governments are populated by Democrats who openly will attack anyone whom they dislike. Lois Lerner is only the tip of the iceberg. The entire IRS is poised to go after “enemies of the State”, as is the EPA, FEC, DOEd, DOJ, FBI and multiple sub-agencies. Remember the Gibson Guitar raid, while it’s parroting competitor was untouched for importing the exact same wood, from the same source?

There are two classes of people who parrot the conservative mantra of people being unable to get ahead because the govmint is stopping them. There are the greedy rich who would prefer to not pay for the externalities of their business and the fools who listen to people like you.

I should buy stock in a laxative ompany considering how much you must use to pull your BS out of you A$$.

What are you talking about? Seriously, I’m asking. This post explicitly states what the right thinks about wealth creation, yet you come back with some kind of loopy straw man ignorance about big-spending big government.

Conservatives, actual conservatives, are indeed bothered by enormous government and its bureaucracies, regulations, and mandates. That, however and as you must know, is not the point here. You are conflating, intentionally and moronically, the right’s view of wealth creation with that of the left (there is a limited pie from which everyone gets a piece and those with a bigger piece are stealing from everyone else) and the right’s view of limited government. Why do you do that? Do you honestly think there is a single LI reader who doesn’t see that for what it is? Hint: there’s not. Everyone here can run intellectual circles around you on their worst day, so why make such ridiculous statements and then preen as if what you’ve said is even remotely on point? It’s truly baffling.

I love it when your responses bear absolutely NO relation to anything that the person whom you are responding to has said.

Do the rich want to get the most bang for their buck? You better believe it, Jethro. Do the rest of us want the same thing? Again, you betcha. So, no difference there.

Do government actions stifle productivity and force workers out of $25/hr jobs and into $12/hr jobs? Yes. Does this keep people from :getting ahead”? Again, Jethro, you betcha.

So, all of those greedy conservatives who saw their $30/hr manufacturing jobs head out of the country, and all of their friends in the support and service jobs who lost $18-25/hr jobs because manufacturing moved out of the country, and are all now competing for a much smaller pool of $12/hr service jobs should thank the gub’mint for making that happen? Is that what you are saying, Jethro? Maybe the President should fire his economic advisors and hire you. I’m sure that you would do the job for $12/hr, wouldn’t you?

I would disagree with you on one point: there are many of the 45%+/- who say this…..because they have been indoctrinated to believe it is so.

Once they live in reality, and see that their indoctrinated ideology impacts them PERSONALLY in all the wrong ways….that is when the eyes open, the light shines, and the words they speak change.

“Democrats have been feeding on the greed, envy, and resentment of a variety of “gimme” groups. These groups have become convinced that they are victims of sexist, racist white male capitalists who amass all available wealth for themselves, leaving nothing for anyone else.”
_____________________

But wait, that noted economic genius Michelle Obama told us that there is only one pie, and if one person gets too big of a piece of the pie (or, as her husband put it “at some point, you’ve made enough money”), then there isn’t enough left for everyone else.

Now these two lefty women are suggesting that we can create more pies, if we just get up off our asses and do something, instead of sitting around waiting for Uncle Sugar to deposit the monthly EBT payments into our bank accounts?

Oh my, Michelle is not going to like that.

Saying that the actor in the title role should of course make more money than their costars just repeats the fallacy of credentialism. Why should it be surprising or offensive that Matt Smith makes more money than Claire Foy? He’s a more well known, bankable star than she is.

One thing women in Hollywood never talk about is the age gap. Actors are usually 5-10 years older than their female costars. You’ll never hear actresses frame their pay gap arguments as “women deserve to make their fame and fortune a decade earlier than men,” though that’s essentially the argument they’re making.

I was thinking the same thing – Clair Foy had a much more significant role in “The Crown”, but Matt Smith (thanks to his Dr. Who stint) had a much bigger existing fan base and reputation. I should add that both played their parts quite well, and it actually increased my estimation of Smith, in that he had the rather difficult role of playing Phillip as a not so intelligent man who is basically a dick most of the time, but who shows flashes of value to the Crown from time to time. From the accounts I’ve read of the real Phillip, that’s a fairly true to life portrayal.

Trivia for “The Crown” – since it would be difficult to age the actors, the producers have decided to replace the entire cast every 2 seasons. So, when Season 3 comes out it will be with an all new, more middle aged cast. (All of the actors knew that was the plan when they signed on)

Exactly. It’s got the cart entirely in front of the horse; it’s not who the show is “about”, it’s who the (all female) audience wants to see on the screen. By all available evidence, that’s “McSteamy” and “McDreamy”, not Ellen Pompeo.

How much of what I’ve earned is your fair share?