The end of the year, the end of a long, bleak era 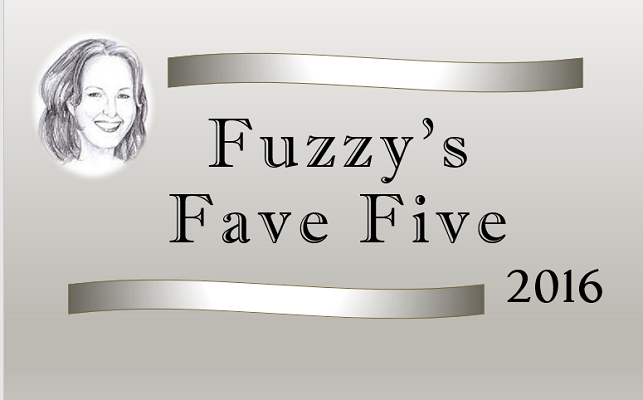 The long, bleak, frustrating Obama era is soon over, and I couldn’t be more pleased or more hopeful for the new year.  With that said, I thought I would join Kemberlee and Leslie in sharing my favorite posts from the past year, so without including posts mentioned elsewhere or further ado . . .

She will never be president, and it looks like that will be the only price she pays for her myriad questionable activities over the decades. 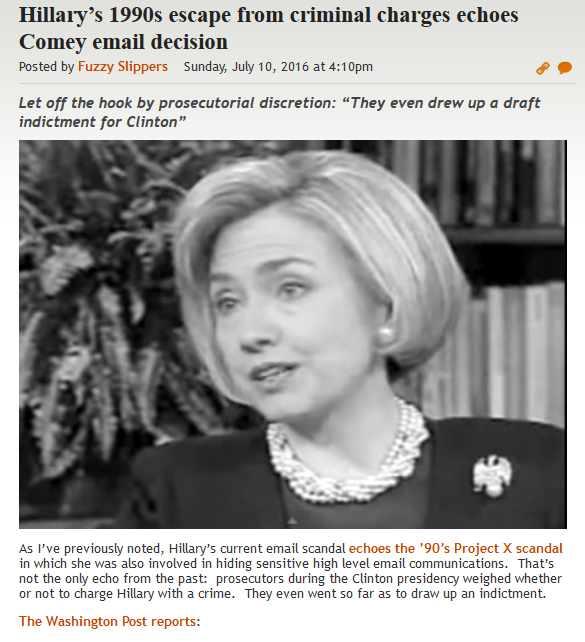 I saw this story on my local news and saw that it wasn’t getting a lot of attention “out there,” so this was a must-write for me. 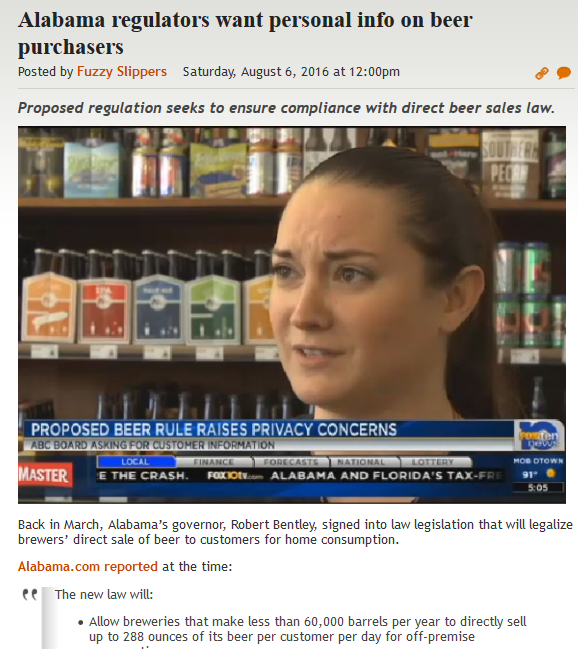 #3 The Conservative Case for Ted Cruz

What can I say?  I was a huge Cruz supporter from his early days—way back in ’12, heh—running for the Senate and was delighted when he announced he was running for president.  Researching this post, I learned even more about his remarkable history as a staunch conservative and life-long defender of the Constitution. 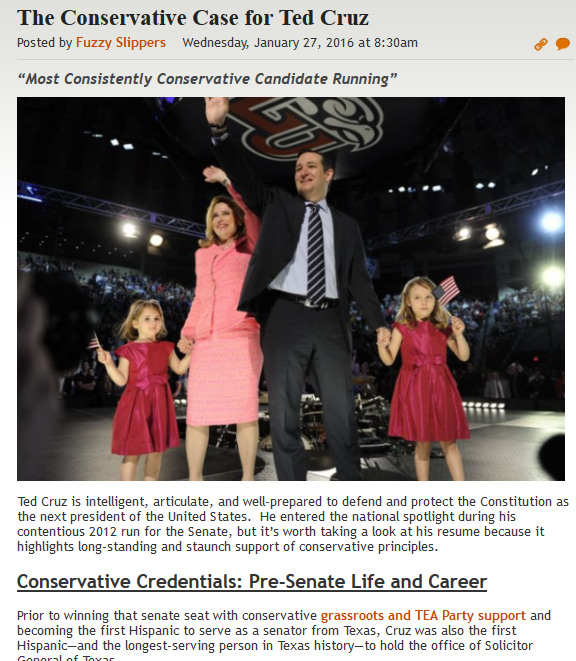 I used to be an avid Anglophile, but my, how the country has changed in recent decades. 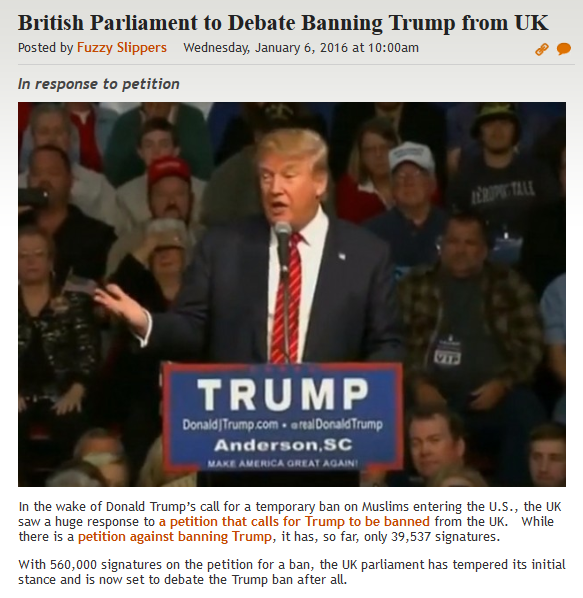 # 1  Student: “Columbia should pay for my period”

While progressives focused on inane and off-putting ideas like this, middle America was left behind, forgotten.  If anyone wants to know why Obama has been so roundly rebuked and Hillary has lost, they need look no further than this sort of thing. 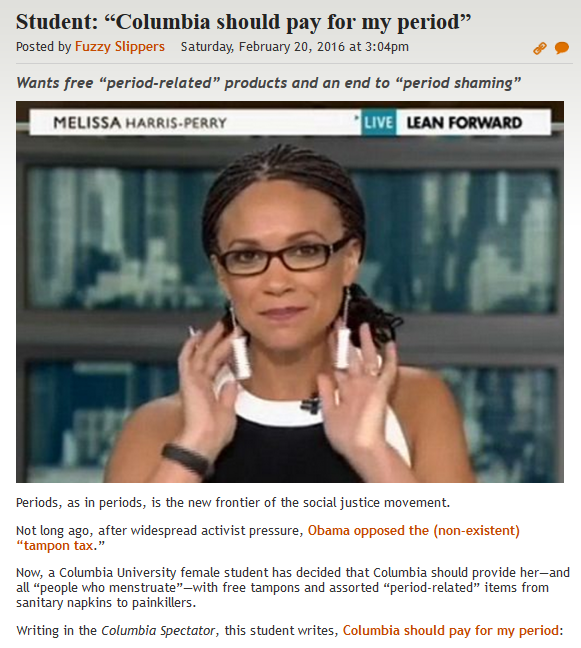 I’m not sure what happened with (or to) this guy, but apparently his songs of peace and love fell on deaf ears. 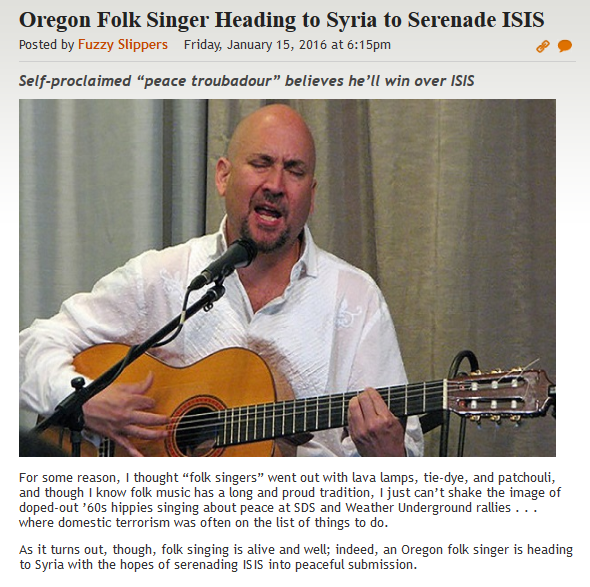 To me, this isn’t just the end of a year, but the end of a long, dark progressive nightmare, so it’s with good cheer and great hope that I greet the New Year and wish nothing but the best for our new president and for our nation.  We’re in for a bumpy ride, but at least this time, we aren’t sitting in the back.

I don’t have a “favorite” LI author, but you are one of my favorites.

Thanks, userpen! That means so much to me–I mean it, too, even though I just said it to Rags. You rock! Happy New Year!

Thanks Rags! That means a lot to me as I value your opinion a great deal. Happy New Year! 🙂

Now I’m blushing. 🙂 Thanks Henry; it’s so great to have you back; your comments are marvelous and were much missed. Happy New Year!

Thanks! Now don’t you have a deadline looming? Back to work!

I had forgotten about the Peace Troubadour, probably because he never ended up as the star of an ISIS snuff film. According to his Facebook page, he actually did go to Syria and made it back alive to moan about the election of Trump.

I wasn’t sure what happened to him, but I was just so struck by the naive lunacy of his “peace mission.” Oh, and he’s moaning about Trump? Big surprise. 😛

People who do things like that are closer to narcissism than naivety.

See? Marvelous point. Of course his “peace mission” was all about him…

Twyman: “ISIS shall recognize my moral superiority and abandon their evil ways.” Narcissism.

Beautifully stated and spot on.

Can folk singers still sing without a head?

That was the burning question . . . and it remains unanswered since this guy wasn’t fool enough to wade into ISIS-caliphate-land and sing his kumbaya garbage.

Yes, for about 1.2 seconds according to research.

Neither part can sing. The head part can still criticize for a second or so, but talking, singing, or anything else involving aspiration is Right Out.

You know, 2016 was probably the best year in a long time to be a political pundit. A lot of the stories just came out of nowhere, like someone was just messing with us. I think I forget to check the news one day and by the evening the UK had left the EU, Roger Ailes was getting fired, Anthony Weiner was about to get Clinton indicted, migrants were cutting a bloody swathe through Europe, Killer Clowns were being sighted everywhere, and Colombia had become a peaceful vacation spot. OK, I’m exaggerating, but just a little.

But you made it through! We love you Fuzzy! And Happy New Year from a little town in California called Beverly Hills.

Hee, tyates, that’s so true, though, the stories were so many and varied and yes, practically daily! Funny you should mention the killer clowns as one of my many posts on them almost made the cut. 🙂

It was interesting to reread the comments to #3 The Conservative Case For Ted Cruz and observe which ones held up over time and which ones now seem rather foolish.

Like your insistence that Cruz was a Canadian? That lie never gets old!

I’d quite forgotten about your “Intercontinental Railroad” stupidity.

You still got a whole lot of nothing Rags.

Another of your obvious lies, Lying Gary.