When will these attacks stop? 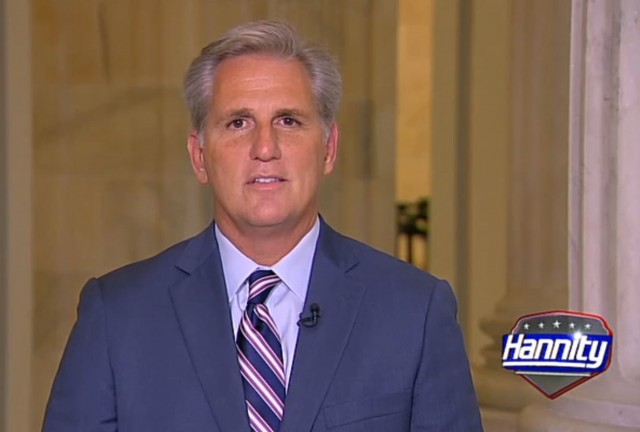 The congressman shared pictures on Instagram and asked for information on the perps caught on camera.

Security cameras caught two young men on camera as they threw a huge boulder through the Bakersfield, CA, office window.

“Does anyone know these two guys?” asked McCarthy. “They threw a boulder thru our office window and took office equipment.” 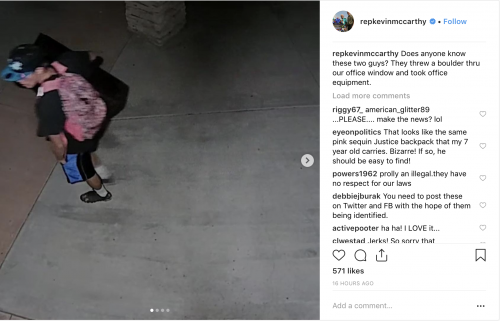 Republicans have faced attacks this year as midterm elections happen next month and over the confirmation of Supreme Court Justice Brett Kavanaugh.

A Republican office in Wyoming caught fire in September. The fire department “said that because the incident was an apparent arson attack on a building occupied by a political organization, federal agents will carry out the rest of the investigation.”

Vandals attacked the New York City Republican headquarters two weeks ago. They broke windows, spray -painted the anarchy sign on the doors, and wrote that this “attack is merely the beginning.”

A man attacked Republican California House candidate Rudy Peters with a knife in September and threatened to kill him.

When Dems regain power? Civility too.

It requires a touch of either delusion or naivety to believe that this behavior will end simply because Dems regain power.

The vandals are already here and the goths are on their way.

Bakersfield is, in many respects, a snippet of the Third World. Property crime is rampant (and much of it goes unreported, because is it generally neither investigated nor prosecuted.) Was there any evidence released that suggests this is politically motivated and not just a garden-variety theft?

A lack of “civility” is nasty speech, especially at inappropriate times or places.

Vandalism and arson are the use of violence to achieve what one has been unable to achieve via the ballot box, and thus inherently subversive to a democratic state.

I don’t approve of violence, theft, or property damage against any person, including Democrats. This is a sentiment I see expressed across the board at sites where Conservatives hang out, and most especially where the giddy kiddies hang out.

We as a country learned how to deal with the Westboro Baptists, and we have successfully applied those methods toward all groups, with the exception of ANTIFA, who forced the issue.

Given that the vandalism was in furtherance of a theft, I will for the moment presume that this activity was non-political in nature.

when some of the attackers get blown away, is my guess.

the Left wants a civil war, and it’s getting close to where they’re going to get just that.

it just won’t go down the way they think it will.

Since no one is inciting this behavior it must be spontaneous, the new normal. We just have to get used to it. Or we could treat this like it really is and see the other side has long ago started the party. The violence is here. No, nothing we can do about it. That wouldn’t be civil.

These attacks will stop once Democrats get trounced in the midterms. Losing the one thing they care about (political power) will be a wake up call.

I actually expect them to become even more belligerent if (when) they lose, and for the violent acts to increase. They aren’t the type to fold their tents and steal silently away in the night. Power is a drug for them and like many addicts they will commit criminal acts to keep their “fix” coming.

Democrats own California and still conduct this nonsense… Shame…