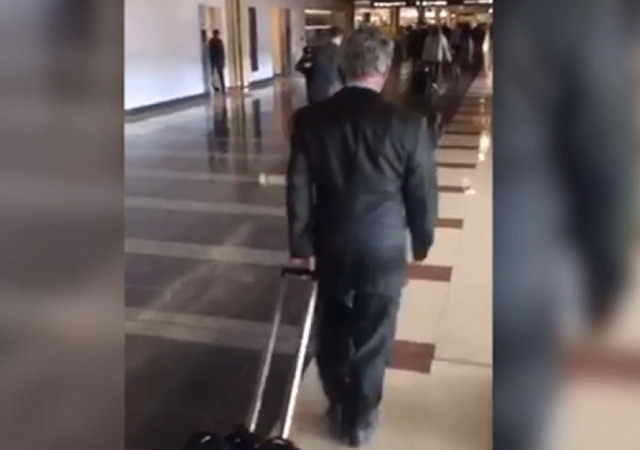 In the spring of 2017, Rand Paul was on the baseball field where Rep. Steve Scalise was shot by a leftist. Less than a year later, Paul was physically attacked by a neighbor.

Now he is being harassed by leftists over Kavanaugh.

As Paul was exiting the airport Monday, the group of several women began shouting at Paul, asking him if he would call for an investigation into Kavanaugh. Paul did not respond and continued walking, to which one of the women said, “Women deserve better than silence, Mr. Paul.”

The protesters also screamed “shame” at Paul as he walked out. This comes the same day a group of protesters chased down Georgia Republican Sen. David Perdue and his wife at the same airport.

Just two days ago, Senator Paul’s wife Kelley wrote this for CNN in response to Cory Booker, who told activists over the summer to get in the faces of members of Congress:

My husband, Rand Paul, and our family have suffered intimidation and threats

It’s nine o’clock at night, and as I watch out the window, a sheriff’s car slowly drives past my home. I am grateful that they have offered to do extra patrols, as someone just posted our home address, and Rand’s cell number, on the internet — all part of a broader effort to intimidate and threaten Republican members of Congress and their families. I now keep a loaded gun by my bed. Our security systems have had to be expanded. I have never felt this way in my life.

In the last 18 months, our family has experienced violence and threats of violence at a horrifying level. I will never forget the morning of the shooting at the congressional baseball practice, the pure relief and gratitude that flooded me when I realized that Rand was okay…

Earlier this week, Rand was besieged in the airport by activists “getting up in his face,” as you, Senator Booker, encouraged them to do a few months ago. Preventing someone from moving forward, thrusting your middle finger in their face, screaming vitriol — is this the way to express concern or enact change? Or does it only incite unstable people to violence, making them feel that assaulting a person is somehow politically justifiable?

This is not happening only to Senator Paul. Many Republicans are being harassed in public places, just like Maxine Waters urged an angry mob to do.

The left is playing with fire and they don’t seem to care.

[Featured image is a screen cap of Courier Journal video.]

He needs to be accompanied by a security detail armed with shotguns and katana swords, who also have PTSD and anger management issues.

Question: don’t the D.C. cops police the airport to keep the rabble from harassing travelers? Or have they been ordered to stand down by the Leftist mayor and police chief?

notamemberofanyorganizedpolicital in reply to Bucky Barkingham. | October 5, 2018 at 2:46 pm

Why aren’t all the GOP Congress members whipping out their smart phones and recording the faces and actions of those
DEM-Soros paid criminal protestors?????

Heck Congress members carry 2 or 3 smart phones for that purpose!

RodFC in reply to notamemberofanyorganizedpolicital. | October 5, 2018 at 4:07 pm

Sorry. You were a victim of the LI phantom accident thumbs down at my hand. Bah!

notamemberofanyorganizedpolicital in reply to RodFC. | October 5, 2018 at 6:07 pm

I can’t think of anything that would make the recording of the protestors not legal.

It would be with their knowledge, just as they should know there are scores of security cameras all over DC recording them inside buildings and out on the streets…….

HamiltonNJ in reply to notamemberofanyorganizedpolicital. | October 5, 2018 at 9:10 pm

Exactly. Have an intern follow you around – camera at the ready. Film these “activists” and post their faces on social media.
Make sure to get plenty of closeups and good screen grabs.

The video is broken for me.

Those women are utter garbage. Paul should have turned around and asked them if they shared the same concern when he was ambushed by his crazed Left wing neighbor.

Leading to what? They try to pick up where his neighbor left off? The halls of Congress are not a place to pick a fight on camera. He had an opportunity to retreat and he took it. It’s getting old seeing protesters go after people with a reduced physical ability to defend themselves, especially ones injured by a prior politically motivated attack.

It was 35-40 years ago I wrote my first letter to an elected representative. It was a mis-fire on my part and the rep pointed me to the official I should have written in the first place. Right or wrong, since that time I’ve always directed my political issues and opinions to my district rep.

As often as I hear of protesters confronting senators whether in the capitol, while traveling or at home, I wonder why none of them ever seem to ask the protestors where they’re from or are constituents … Seems like the obvious solution to much of this blind-side BS by paid-protesters would be to tell them they have NO standing since almost certainly they are NOT constituents of the reps/senators.

I’m sure the left would scream bloody murder, but with what politics has devolved into – pure thuggery – congress ought to consider some kind of ‘Constituent ID’ act paired with capitol security to keep non-constituents from interfering/inhibiting access to elected reps by their constituents.

notamemberofanyorganizedpolicital in reply to MrE. | October 5, 2018 at 2:49 pm

Because they are PAID to do this the GOP Congress Members.

Mr. E, I disagree with your premise. Whatever any of them votes on affects me, so I call and occasionally give money to out-of-staters because I know this. Did I give to Scott Walker during his recall campaign? You’re darn right. Do I live in Wisconsin? Not even close. Did I give money to Scott Brown in Mass. in an attempt to prevent Obamacare from adoption? Yes I did. Again, don’t live in the region.

They vote on issues of my concern. I call them and listen in on their telephone townhalls, etc. One thing I do try to refrain from is asking questions on the telephone townhalls, because generally residents don’t get enough time to ask questions, but if you listen to them as I do, you can hear that the leftists have arranged to ask most of the questions. It’s very disheartening when I KNOW there are more normals but mostly leftists are asking questions, quite transparently posing as “concerned constituents.”

Thanks for your reply, Close the Fed. I genuinely appreciate where you are coming from and respect your principled engagement. Within your answer, it’s clear that you ‘respect the rules’ and engage representatives thoughtfully; I would conduct myself in the same way. I hope you understand the gist of my comment has to do with the physical security of senators and representatives and that their primary responsibility is to their constituents.

The leftists are using ambush tactics, attempting to impede ingress/egress of elected representatives, invading personal space / home / sanctuary to threaten and intimidate, occupying halls, offices, ignoring their schedules/calendars, etc. Such prevents them from doing the job they were appointed for and interferes with constituent access.

Ours being a representative form of government, I’m simply suggesting security measures for DC to compel visitors to work within the system.

He should go full Robert Stack, like in the movie Airplane.

If tbose women are Generals in the upcoming civil war, we will be OK.

I wonder what they would have done if he had simply stated the obvious, “I’m sorry, but you do not speak for all women.”

notamemberofanyorganizedpolicital in reply to Anchovy. | October 5, 2018 at 2:50 pm

NOR Any Women, but for Hillary’s Thespian Brigade!

Walker Evans in reply to notamemberofanyorganizedpolicital. | October 5, 2018 at 4:26 pm

“Thespian”? Are you sure that’s the word you were looking for? I ask because most of these (paid?) protesters appear to be as bi as Hillary’s good friend Huma.

Also my first reaction, and then I realized that his comment was …… perfectly reasonable (and perceptive) as it is.

The evidence is silent on the allegation(s).

The left continues its march toward mob rule – AKA communism. Of course, it never gets there. They always reckon without the socialist state’s desire for self-preservation. Sooner or later the mob will be suppressed by their own masters.

Tex, I expect a few patriots with MSRs will slove the problem before it reaches that level.

“solve”, not slove. There really needs to be an edit function on here!

Hey, if sloving gets the point across, then slov on. 😉

Thanks Walker, you just coined my STA Team’s nick (should we ever be activated)

“On me, you filthy Slovs! Do you want to live forever!”

That’s a sentiment frequently expressed, without the slightest indication as to how you intend to implement it – or any recognition of the fact that it’s one of their goals, not a solution. Which doesn’t in any way imply that I have anything resembling a good solution to the problem, either. Education is the only cure, and conservatives rarely become teachers, even if they could get and keep a job in such a left-dominated field.

Senators should accompanied by law enforcement and protestors should be invasively searched for weapons when they approach demanding to be heard. In the mean time the senator can escape.

You are correct.
Thus, additional, antsy and steroidal guards should carry additional katanas, making Senator Paul’s Katana redundant. However you slice it, that stroke would cut down the number of protesters.

Actually, I think a more practical solution would be a return and continued presence by Rolling Thunder.

I think we are on the eve of the Left threatening the wrong people, with a bad end result, for them. It’s all fun and games until the holster is unsnapped.

If protesters surround me in an attempt to prevent me from passing, they’re in for a surprise. The second they touch me, all hell is going to break loose. Let’s see how smug they are after they’ve been beat down by a 55 year old woman.

I approach this from a different viewpoint – this kind of meaningless confrontational partisanship will inevitably result in an increased distance between politicians and the public.

Over the next 30 years, access was increasingly restricted; constituents found it more difficult to meet their representatives; metal detectors were added and snail mail and telephone were the best ways to provide input; with the advent of e-mail, voters were further separated from their representatives. Senators represent the entire country but try to e-mail most Senators (and especially Representatives) if you are not a resident of their State. Even if you are successful you receive a canned, usually non-responsive reply written by a 22 year old flunky.

Post 9-11, the hugely expensive Capitol Visitor Center ensured that constituents are herded into an underground room, divested of packages, and given a highly structured and limited tour of the magnificent building, excluding meeting their representatives.

As the Partisan Democrat crazies who are given Gallery passes by Maxine Waters, Schumer, Pelosi, Feinstein, Kamala, Booker et al abuse that privilege, and disrupt the Senate and the House,does anyone believe that another separation of representatives and the American people will not be forthcoming?

All of these barriers between Congressional representatives and the American people (which is being duplicated on the State and Local levels) will ensure that special interest groups with money will be the sole people with access to influence public policy – given the Democrat’s huge advantage in wealthy donors, both individual and groups, maybe this is the plan.

Man, after what he’s experienced in the last two years, this is one of the LAST people you want to verbally assault.